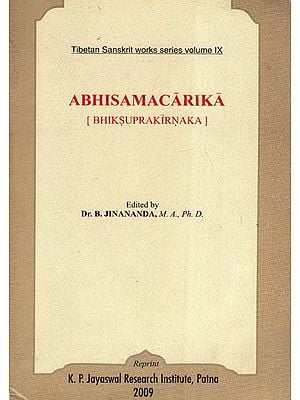 FREE Delivery
$21.75
$29
(25% off)
Quantity
Ships in 1-3 days
Notify me when this item is available
Preface
I deem it a privilege by virtue of being once the Honorary Joint Director of the K. P Jayaswal Research Institute, Patna to be called upon to write a foreword to this book which I had entrusted to Prof B. Jinananda of Delhi University to edit. It is with great pleasure that I present the Abhisama carina in a published book from to the world of Buddhist studies and the learned professor deserves our hearty congratulation for having so carefully and meticulously edited the work after undergoing so much painstaking efforts, normally required for such a job, and that too in the midst of his heavy per-occupations.

I am quite conscious of my limitations to point out the importance of the book and prefer to content myself by referring to what the learned Editor has tried to bring forth in his introduction, while evaluating the worth and value of its contents in its multi-dimensional aspects.

Credit goes to late lamented Mahapandit Rahul Sankrityayan, the doyen of the ideologists and the indefatigable explorer of repute, who could discover this manuscript along with others in the agro Monastery in Tribe. He photographed them and ungrudgingly presented them to the Bihar Research Society Library at Patna in A. D. 1936, in the spirit of his warmth of scholarship to disseminate knowledge. The government of Bihar, on founding the K. P Jayaswal Research Institute at Patna in A. D. 1950, was pleased to transfer most of these valuable collections of Rahulji from the Bihar Research Society to this Institution with an avowed objective for their publications. I will be failing in my duty if I do not express my sense of gratefulness on behalf of the Institute to the Bihar Research Society which is the custodian of the collection of Mahapandit Rahul Sankrityayan brought from Tibet.

Thanks must be accorded to the Darbhanga Press of Darbhanga for having accomplished so successfully the difficult task of printing this book.

Introduction
The Manuscript of the Abhisamacarika (nama Bhiksupra akirnaka) was discovered by Mahapandit Rahul Sankrityayana in Shalu Monastery, near si-ga-rtse, in Tibet in May, 1934' during his second visit to that country. Photographic copy of this Ms. along with others collected during his third visit. in 1936, 2 were preserved in the Bihar Research Society, Patna. After the establishment of the K. P. Jayaswal Research Institute by the Government of Bihar in 1950, all these copies were entrusted with the Institute for publication.

After examining the folios carefully, we had the impression that the Mss. remained intact in a bundle having 50 folios of palm-leaves. These are scribed on both sides of the leaf, making it exactly 100'pages. Each page contains seven lines. There are 124 to 140 letters in the first, second, sixth and seventh lines, and 115 to 118 letters in the third, fourth and fifth lines according to the size of the letters written by respective scribes. Our impression is that more than one person participated in scribing the text.

In the middle of the folios, there are two gaps leaving spaces sufficient to accommodate, approximately, five letters each, where two holes are made so that the bundle of palm-leaf Mss. could be bound together. The size of the Mss. is 21" x 2" written in Vartula3 (old Bengali or/and old Maithili) script. There is no indication of authorship even in the colophon. But Rahulji seems to be inclined to assign it to Jinendrabuddhi.

We are not sure about the date of the text. But according to the colophon, the text belongs to the Lokottaravada school, a branch of the Mahasa righikas of the Middle country. The Mahasati ghikas were among the first group of monks who caused schism in the Sangha at the time of the Second Buddhist Council, held at Vaisali in the fourth century B. C. But it is difficult to assign such an early date to the text. The time when the text was taken to Tibet is also uncertain. It will not however, be out of place here, to quote the discoverer himself in this matter' "Though the import of palm-leaf MSS. began from the middle of seventh century during the reign of Emperor Srong-bstans campo (630-639 A. D.), their number was very few. Intense activity in the field of translation is witnessed during the four centuries. viz.

from the middle of ninth century to the middle of thirteenth century. During this period many thousands of palm-leaf MSS. were taken to Tibet, and in normal course: they ought to be found there. But we know that great monasteries of Bsamyas and Toggling (near Mansarovar) were destroyed by fire, in which many precious collections were burnt. Though the great monastery, Sassy, where many hundreds of Sanskrit books were translated into Tibetan, was never destroyed after its ascendence, later hierarchs did not care for these MSS. which had no meaning for them, and, they allowed the scholars of their sect to take the MSS away to their monasteries, Shale and Ngoro, originally belonged to Sassy."

The title of the book given by Pandit Sankrityayana needs correction. The slip bearing the title Bhiksuprakirnaka was stuck to the Mss. before Photographs were taken, and the same title has been automatically adopted in the list of Mss. discovered in Sha-lumonastery with an additional word [Bhiksuprakirnaka] Vinaya.2 In the initial stage of editing, the present title was not known, but the words "Abhisamacarika Samapta " at the end of the text gave us the clue to the exact title as we have now. Obviously the title was given in hurry by Rahulji as he had only three days at his disposal when he first paid visit to Shalu monastery to take photographs of a large number of Mss. All subsequent scholars in the field took that title for granted without going through the text. Hence the title has been repeatedly used for the last 35 years, in the lists of Mss. preserved by Bihar Research Society, K. P. Jayaswal Research Institute and in the lists of publication of the Institute. That is the reason why we could not dispense with the title "Bhiksupraki ran aka" and retained it in the bracket just below the main title in the title page, for the convenience of the scholars.

The discovery of the Ms. of this text by Pandit Sankrityayana is an outstanding contribution to the field of Buddhist Vinaya literature, particularly in Sanskrit. The rules extant in this book are of lesser and minor nature and cannot be included in any of the seven categories of offences given in the Pali Vinaya Pit aka : viz : Parajika, Sanghadisesa, Thullaccaya, Nissaggiyao cittiya, Pa cittiya, Dukkota and Dubbha sita.

But only the last two categories mentioned above may be said to be inclusive of them by implication, The Meaning of the word, • Abhisamacarika or even Abhi° found in dictionaries is as follows.

Thus the term means violation of rules, i.e. dereliction of speech and deed. The usage of the term in the text in question, suggests the same meaning given to it. This can be seen in words "Na pratipadyati abhisamacdrikan dharman atikra mati." which occur at the end of every paragraph after the promulgation of a rule by "Bhagavan (the Blessed One). 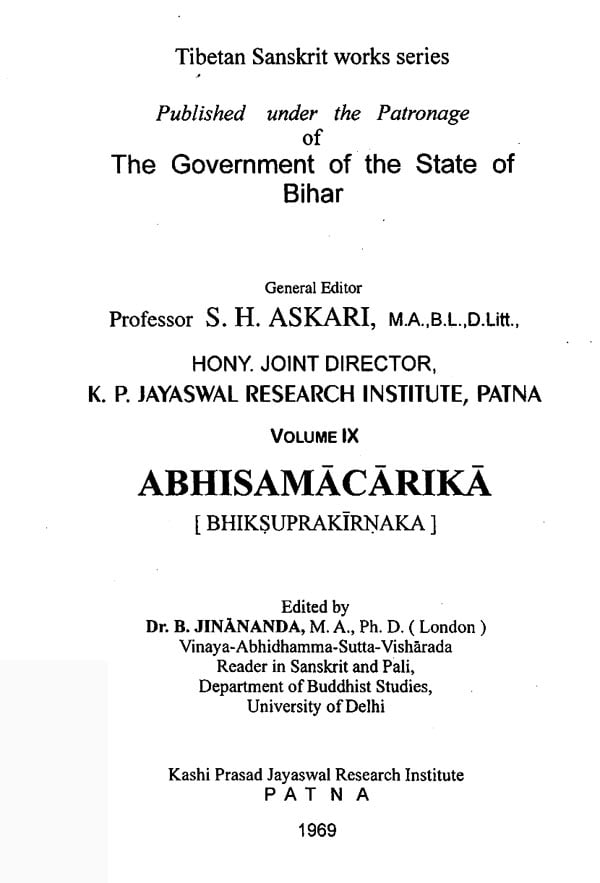 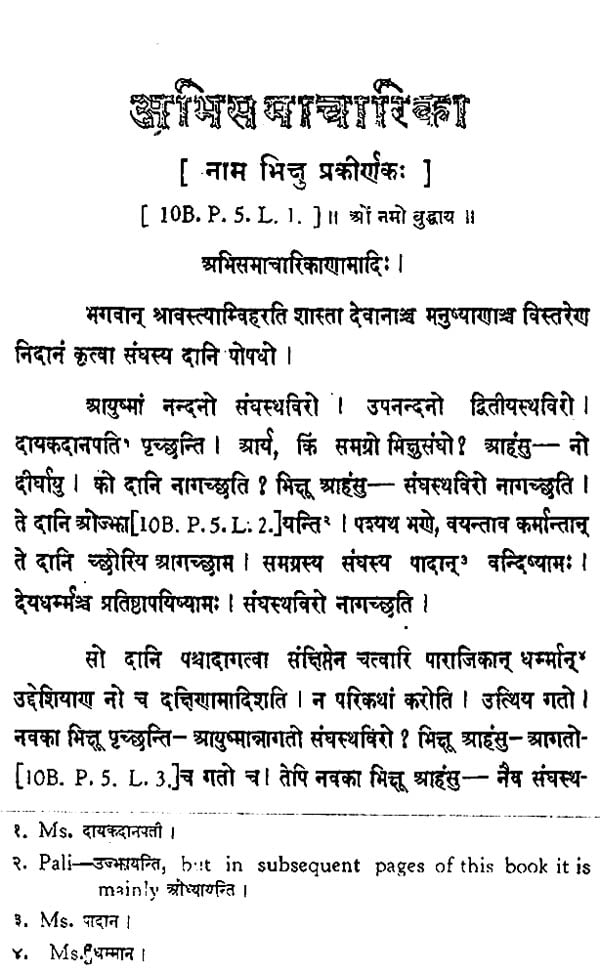 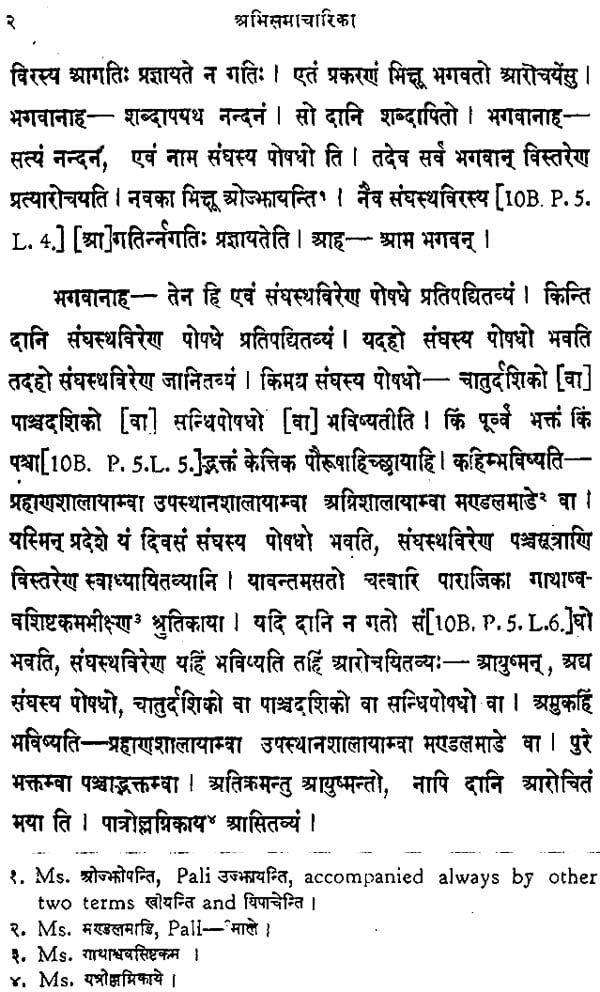 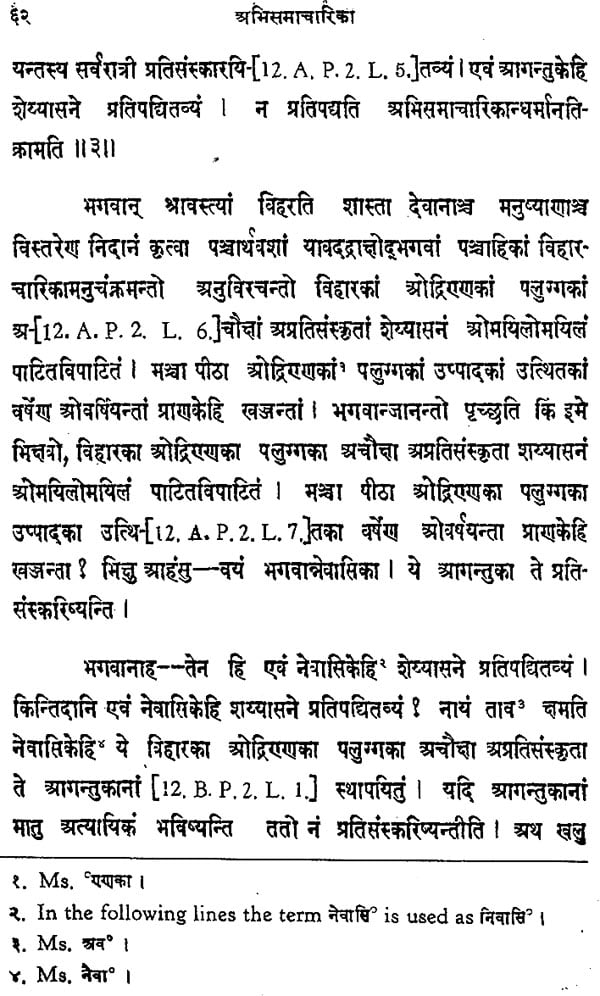 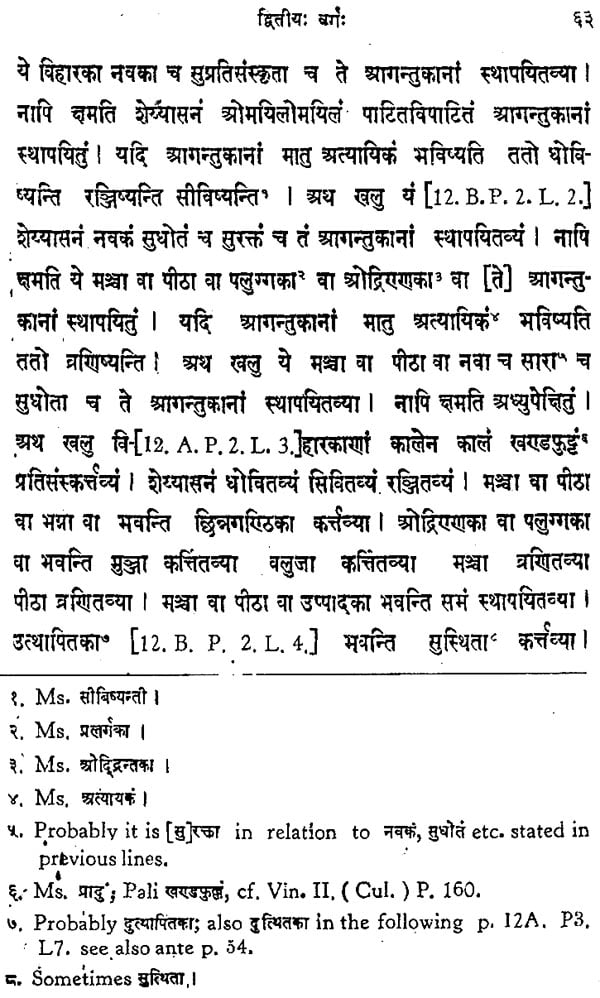 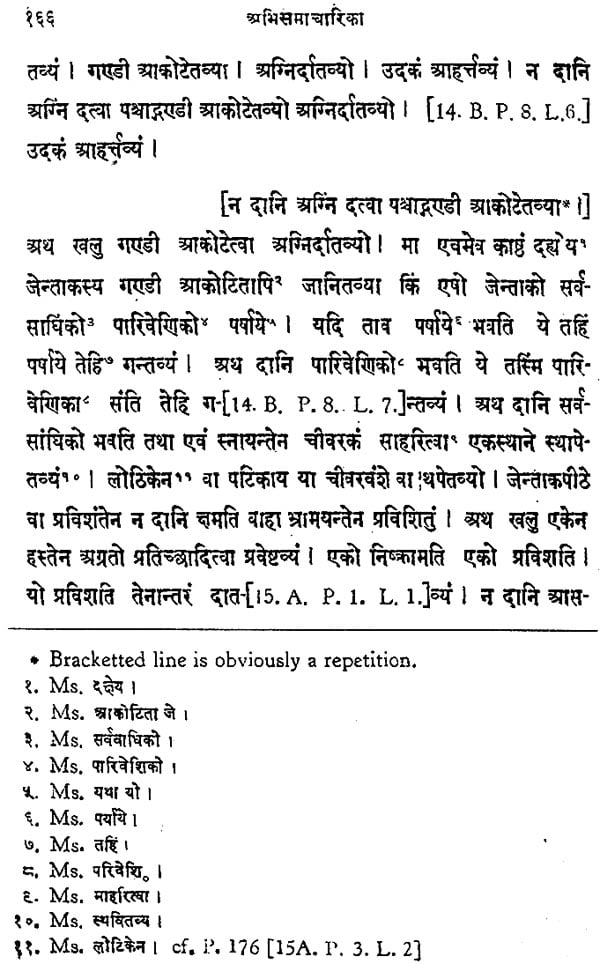 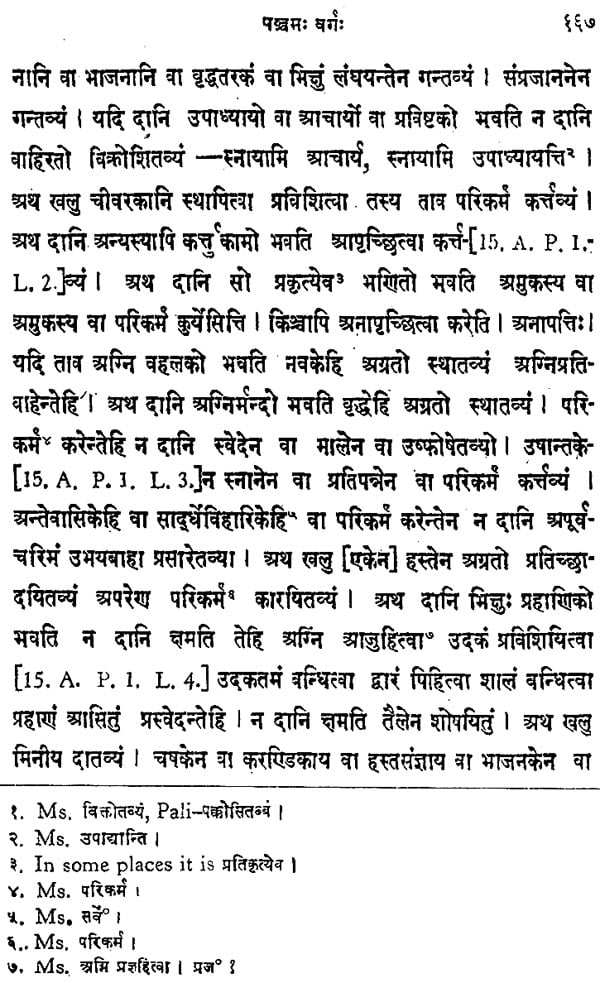 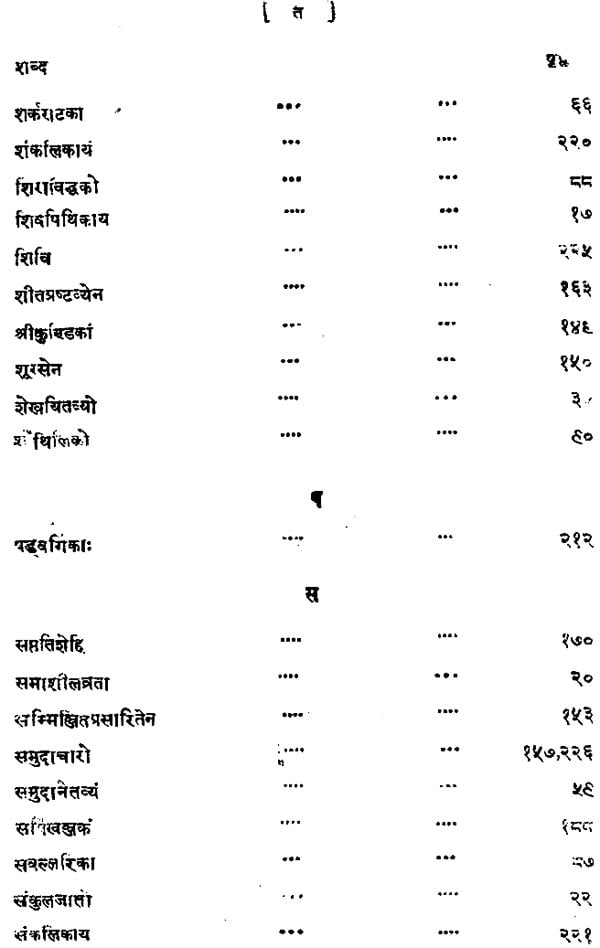 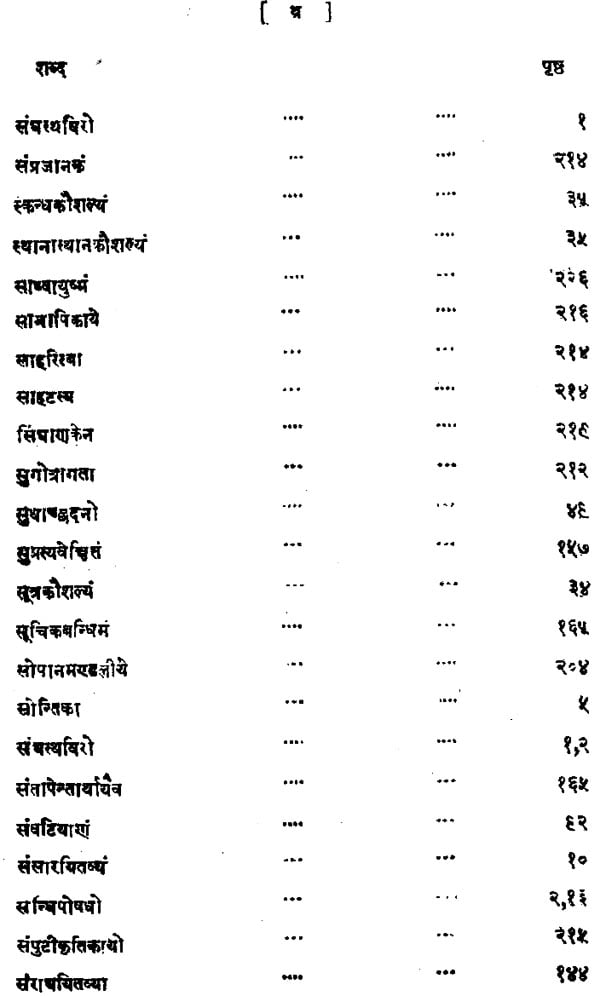 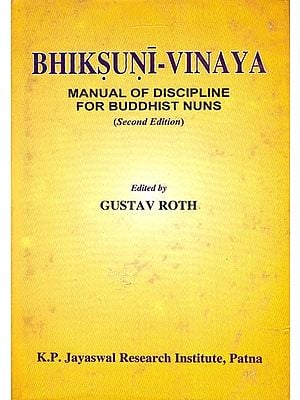 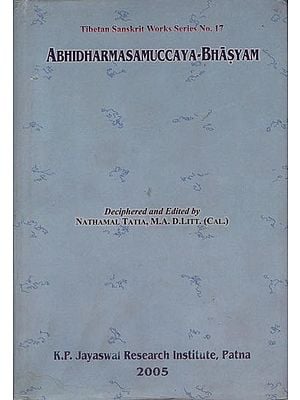 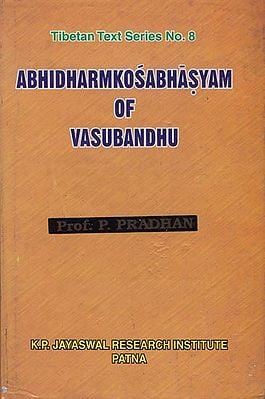 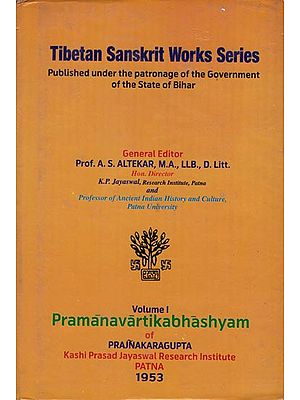 Pramanavartikabhashyam of Prajnakaragupta (Tibetan Sanskrit Works Series) An Old and Rare Book
By Prof. A.S. Altekar
$40
Out of Stock 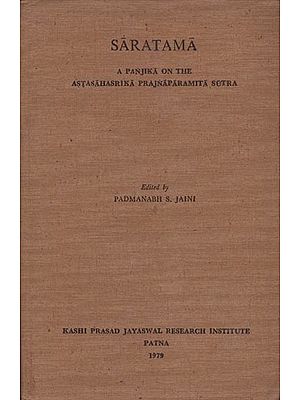 Saratama: A Panjika on the Astashsrika Prajnaparamita Sutra (An Old and Rare Book)
By Padmanabh S. Jaini
$29
FREE Delivery 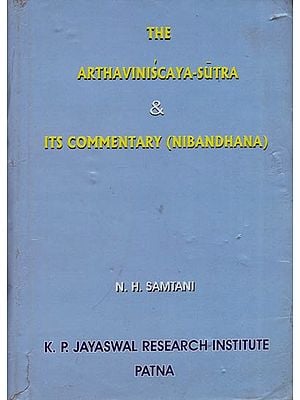