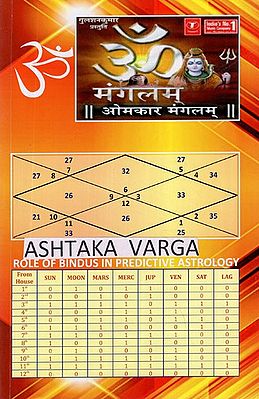 This book ROLE OF BINDUS IN PREDICTIVE ASTROLOGY which is the application of ASHTAKAVARGA System of prediction is incorporated with procedure for erection of different AV charts which are very essential for the prediction of the results of planets. Speciality of the system is division of rasi into eight Kakshya, analysis of the chart using kakshyas leads to accurate results and timing of events. Results of various bhavas can be assessed using Saravashtaka Varga bin-dus. This book is very useful for the learners and practitioners of astrology.

The author of this book R. NANJUNDAIAH B. Sc, B.E.(Mech) is a practicing astrologer, and Faculty at, BJS Bangalore. He is one of the founder Trustee and at present he is a Treasurer of Bharathiya Jyothisha Samsthan, Bangalore. He is also a life member of Indian Council of Astrological Sciences. He was also a faculty with ICAS, Bangalore chapter -I. He has acquired the astrological knowledge by studying the subject under the guidance of learned, well known, leading, expert Astrologers of the city. He had shown keen interest in Astrology right from young age and had experimented many of the principles putting into practice. He had attended many national and international seminars and met many learned astrologers in the different systems of Astrological sciences and acquired the knowledge of the subject. He has special interest in predictive astrology using Ashtakavarga system of predictions, Horary system of prediction, Application of Divisional charts, Transit results, apart from Vastu Shastra and palmistry etc. He has specialised in the field of horary and Ashtakavarga system.

At present he is teaching various subjects related to Astrological Sciences at Bharathiya Vidya Bhavan, Bangalore and Mysuru. And the classes are being conducted by Bharathiya Jyothish Samsthan Bangalore. This book ROLE OF BIN-DUS IN PREDICTVE ASTROLOGY, is prepared for the application of ASHTAKAVARGA system prediction with case studies and is very useful for the learners of astrology and also for the practitioners in the field.

Let us understand the term ASTROLOGY before going to the subject ASHTAKAVARGA , which mainly deals with the effects of different bindus donated by different planets and lagna to the Bhinnashtakavarga of the planets , the details of which will be dealt with in details in the foregoing pages :

1.0 Astrology is a science which deals with the foretelling of the fortunes and misfortunes of human beings , fates of nations , happenings such as earthquakes, floods, droughts , volcano eruptions ,pestilences and many other events connected with the terrestrial phenomena, which is based on the movements of the different planets.Dr.B.V. Raman defines it as" the science of correlation of astronomical facts with terrestrial events ", at one place and at another place " Astrology connects time , space, and matter together and demonstrates the synchronistic as well as causality or deterministic principles."

It is also stated that it is a divine science which correlates movements of different planets with physical, psychic and souls responses and these responses could be of human beings ,animals and any other animate or inanimate objects , of course , subject to limitations of their natures. This is based on the observations made by our ancient sages , who laid down many principles of astrology, for the future generations, Placement/positions, yogas , avashtas of the planets ,placement of planets in different houses, dasas, transit, significations of planets ,houses nakshatras etc., etc.

Further, there are different systems developed for the predictions of the results of the planets and there are some controversies of certain points are also there. But by applying the various factors, described, carefully and fully in any system we can get accurate results

1.1As you are aware Vimsottari dasa is considered as the one which gives better results with the actual events in life. In addition to dasa the effects of transit of planets through various rasis are examined for predicting the results. In spite of considering or taking into account, various factors such as yogas , dasas ,antaras , placement of planets in houses such as inimical, friendly, exaltation, debilitation etc. ; the nature of events and the time of occurrence predicted with the help of dasa and antaras, may not come true or many times found to be in disagreement with or sometime even contradictory to what are predicted from the transit.lt is also found to be difficultto prove whether the given horoscope would respond to the dasa effects or to transit effect or if both operate under certain conditions.lt was also sought to explain these difficulties by means of Vedha position but even these have also not given satisfactory results.Hence the sages have propounded the Ashtakavarga system, which is based on benefic bindus, or we can say positive energetic points supposed to be given by other planets and lagna,to enable to eliminate these apparent anomalies and arrive at accurate results.

Ashtakavarga system is propounded to eliminate certain difficulties encountered in Predicting the events based on dasa or transit for a given horoscope. In this system the role of bindus and Rekhas donated by the planets is considered for prediction of benefic and malefic results.

1.2.Ashtakavarga is the study of benefic / maleficinfluences of 7 planets and Lagna, which constitutes eight different benefic aspect /energetic bindus points. When we say Ashtakavarga of Sun,it is actually means a study of benefic influence / positions of Sun from its natal position in the chart. In this system they have enumerated certain places asauspicious and others as inauspicious as reckoned from the houses occupied by the planets and from the lagna.ltis so named because these auspiciousbindus / points are considered from seven planets and the lagna.Themarking,usually by bindus of auspicious places in aperson's horoscope with reference to the position of the planets and the lagna at birth constituents Ashtakavargaof that horoscope.The method of working usuallyadopted for preparing Ashtakavarga tables is to consider the auspiciousposition from the rising sign and the signoccupied by the planets. These positions are marked by bindus.

1.3.The specialty of this system is that every rasi is divided into 8 equal parts called Kakshyas and all the rasis have the same order of the rulers of Kakshyas and they govern the same fixed degree area. The division into 8 parts is stated only in connection with the Ashtakavargasystem. The lordship of Kakshyas starts from Saturn and ends with lagna and the order is Saturn, Jupiter, Mars, Sun, Venus, Mercury, Moon and Lagna.

1.4 After preparing several Bhinnashtakavargas and the Samudayaka , total bindus in eachrasi / bhava indicate the good and bad effects, arising from the position of planets at birth have to be judged.

1.5 This is the reason why the results predicted simply from the strength of the planet, position, position of the planets without due consideration of the Ashtakavarga strength do not come upto the expectation. 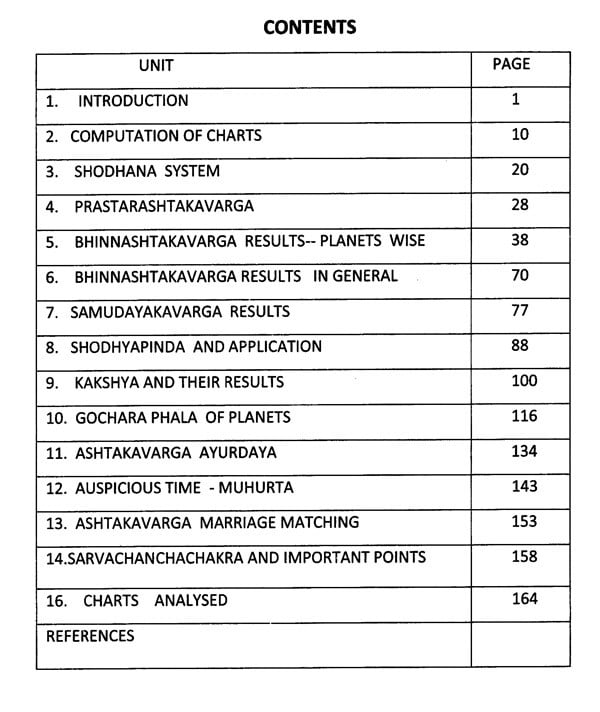 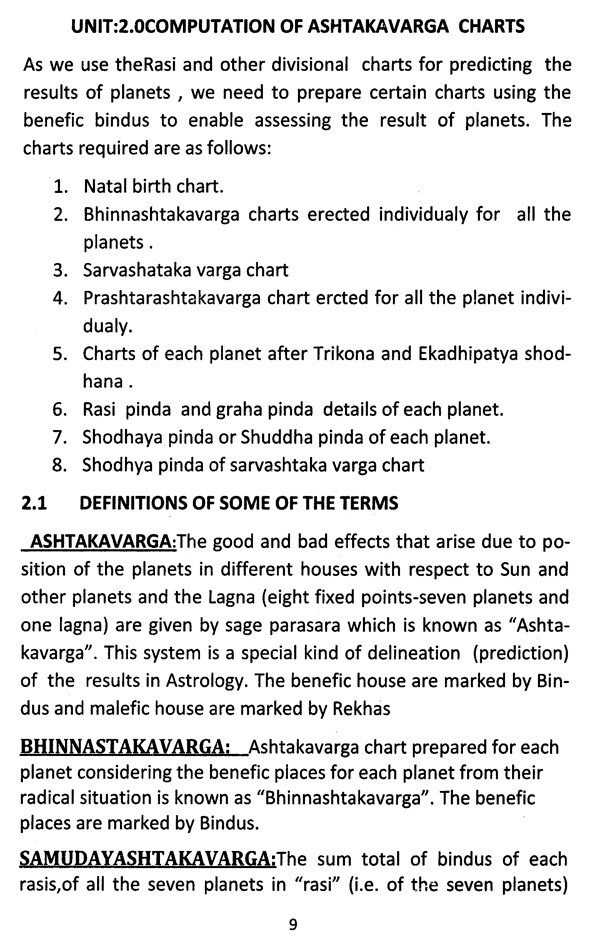 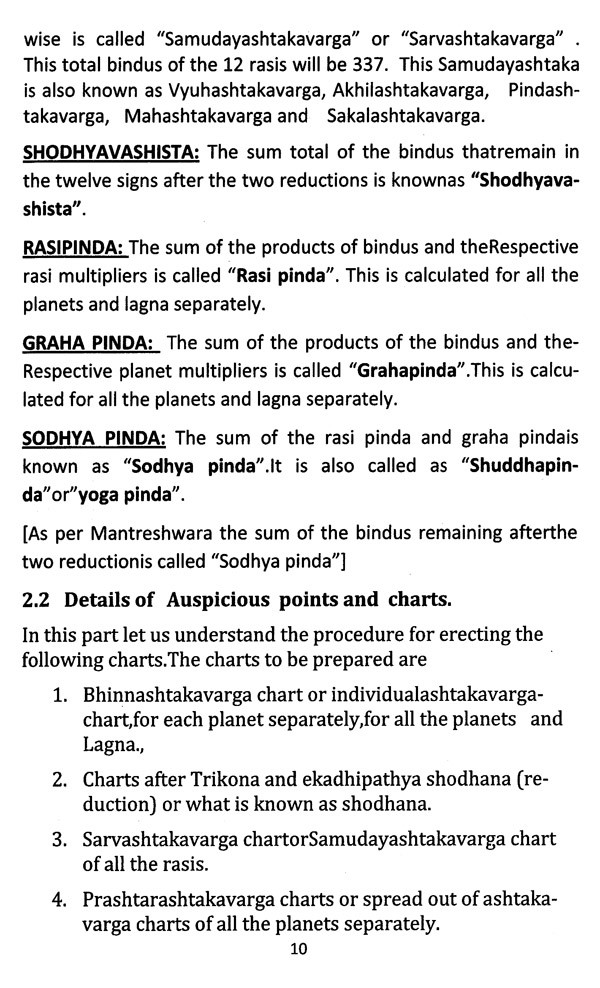 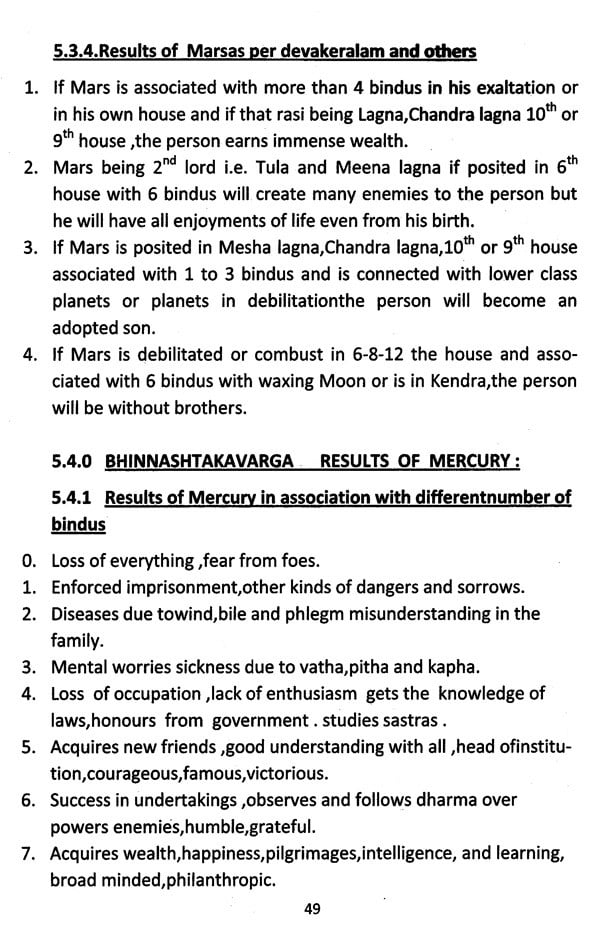 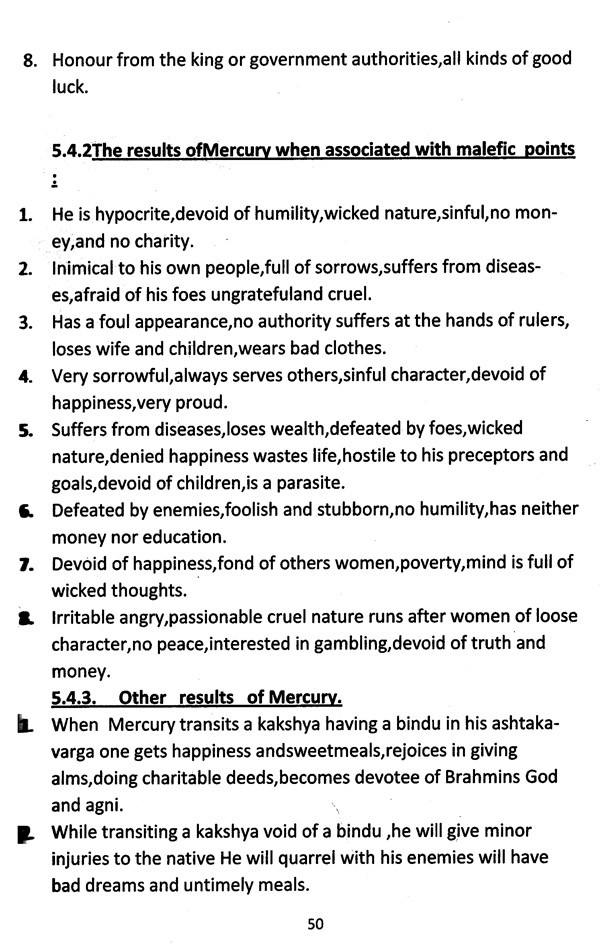 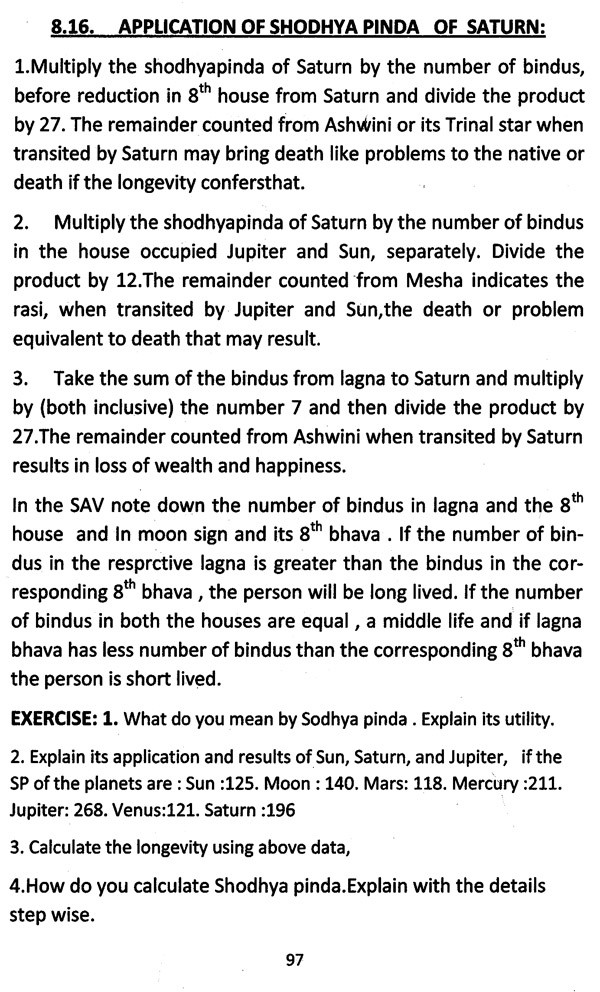 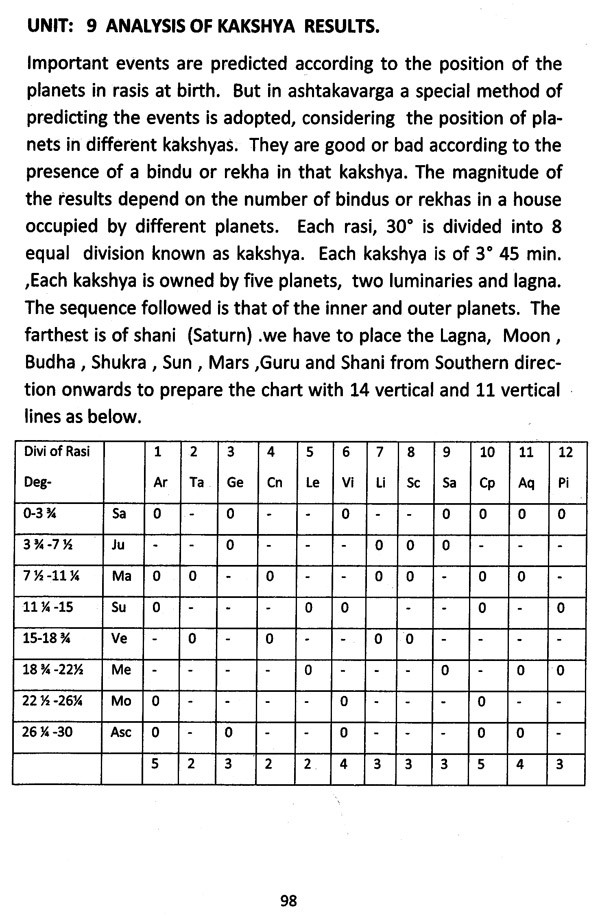 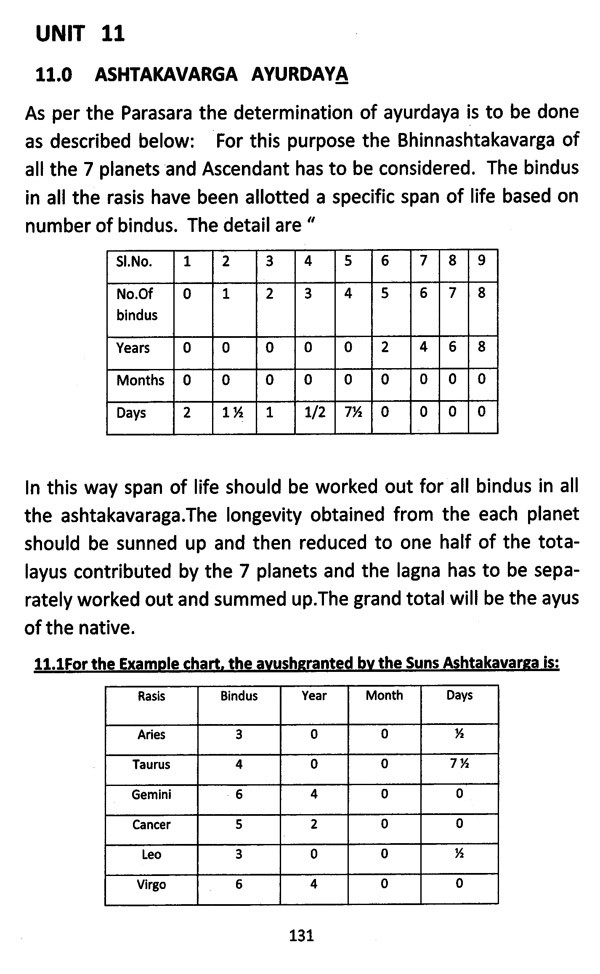 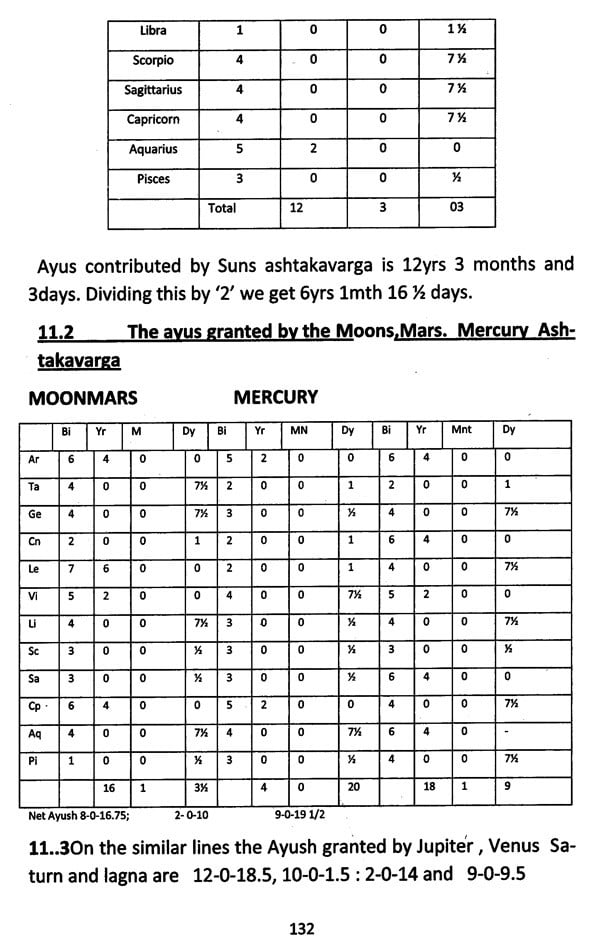