Asvaghosa's Buddhacarita: The Life of the Buddha (Sanskrit Text Word-by-Word translation Melodies for Chanting and Verses in English Grammatical Explanation) 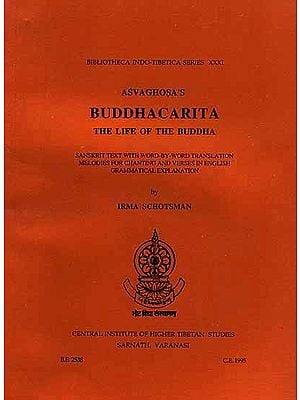 $29.00
Notify me when this item is available
Save to Wishlist Send as E-card Share by Email
Preface
The Main work on the Buddhacarita was completed in 1989 in Kathmandu, Nepal. The book could not then not be published, because the computer fonts given to me were not laserprinter compatible; since I hade not worked with Computers earlier, I had not Understood this problem in time. Due to many visa problems in Nepal I moved to Varanasi, India, to continue my Sanskrit studies. There I retyped the whole manuscript, with a different lay-out, as it is now. However, the printing company with whom I had made an arrangement, again in the end could not produce proper laserprints most probably due to a virus infection. Since nobody else in Varanasi had the laserfont that I had been using there for the Devanagari, I gave up working on the Buddhacarita in 1991, but two years later I took courage again and went to the Central Institute of Higher Tibetan Studies, in Sarnath, Varanasi, to discuss my computer problems and publication of the book.

Venerable Prof. Samdhong Rinpoche, the Director of the Central Institute of Higher Tibetan Studies, and Acarya Geshe Nawang Sherab, the librarian, both immediately showed keen interest in the book, and allowed me to finish the computer work at their Institute. I feel especially grateful to Acarya Geshe Nawang Sherb-la for his never-ending optimism and encouragement regarding this work.

The Central Institute of Higher Tibetan Studies used a Devanagari font with the same computer key-board lay-out as the font I had used in Varanasi, so there I substituted all Devanagari in the text, resulting in the book as it is now being published. Somehow this computer work continued to give problems, and I feel greatly indebted to Acarya Geshe Nawang Sherab, Mr. Pasang Thackchhoe, and Mr. Tashi Dhondup at the central Institute of Higher Tibetan Studies, and Mr. Bruce Graham in Varanasi, for their help and patience at solving these computer problems.

Also, Mr. Bruce Graham spent time to chant all English verse with me, and, being a Sanskrit scholar, in many instances of 'metrical' problems in the English verse thought of better solutions, so that due to his help many verse have been improved, for which I want to express my heartfelt thanks. We realize however that several verses are still not prefect, and I would be pleased to receive comments regarding the English verses from who are using this book.

I also like to thank Prof. Dr. S. S. Bahulkar at the Central Institute of Higher Tibetan Studies, for his advice on points of grammar.

Any suggestion to improve a next will be greatly appreciated. I hope the book will be of use.