Autumn Of The Matrisrch Indira Gandhi's Final Term In Office 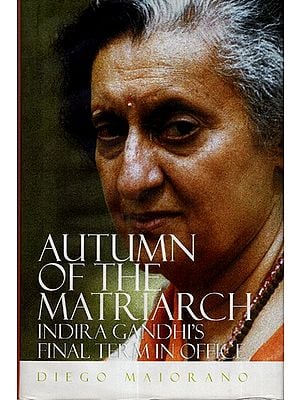 $30.00
Notify me when this item is available
Save to Wishlist Send as E-card Share by Email
Introduction

In January 1980 India went to polls. Indira Gandhi and her Congress (I) party secured a two-thirds majority in the Lok Sabha.' Just a couple of months later, the party obtained another impressive victory in a series of state-level elections. Judging by the numbers, the Congress (I) seemed to have restored its dominance over India's political system, and Indira Gandhi was apparently re-crowned as its Empress.

However, the Congress (I)'s dominance was fragile. This book narrates the story of the fragility of Indira Gandhi's dominance over the political system, the implications that such fragility had, and the process of deep political and economic change that characterised Mrs Gandhi's final term in office, from January 1980 to her assassination on 31 October 1984.

The Indian National Congress3 dominated India's politics for a long time. The party led the struggle for independence against British domination. When India broke free from colonialism in August 1947, the Congress turned from an anti-colonial movement into a governing party. Jawaharlal Nehru, one of the leaders of the freedom struggle, became the first prime minister of the country. A combination of genuine popularity with the party's remarkable ability to extract votes in exchange for patronage distribution ensured the Congress's dominance over India's political system for the first two decades after independence.

Things started crumbling in the late 1960s. Nehru, who had been the prime minister uninterruptedly from 1947 till his death in 1964, left a void that the Congress found difficult to fill. Nehru's successor as Prime Minister, Lal Bahadur Shastri, unexpectedly died in Tashkent in 1966. Therefore, for the second time in less than two years, the Congress party had to choose its leader, a process that, inevitably, tests the party cohesiveness and, usually, leaves many disgruntled leaders behind.

In 1966 the party's leadership chose Indira Gandhi as the next prime minister. She had several advantages. First, she was the daughter of Jawaharlal Nehru. Second, the marriage with a long-time friend, Feroze, had given her the surname "Gandhi", which could not but remind the people of the Mahatma, India's only undisputed father of the nation. Third, being a woman, the Congress leadership thought that she would be easily controllable and thus would not pose a threat to the structure of power within the party (Malhotra 1989). As it will become very clear in the course of this book, nothing could be further from the truth.

The dominance of the Congress party was seriously challenged for the first time during the 1967 general elections. As we will see in greater detail in chapter, this election marked a watershed in Indian politics. The Congress managed to secure a wafer-thin majority in the LokSabha, but lost the control of a number of state governments. The "Congress system" (Kothari 1964) was shaken to its foundation.

The years that followed were marked by intense change within the Congress party. Indira Gandhi, rather than being the "dumb doll" that many senior politicians had believed, turned out to be a cynical and skilful politician. She first orchestrated a split in her own party (in 1969), which brought her to assume control of the organisation. She then con-ducted the Congress to a massive electoral victory in 1971 and the country to a major success in the war against Pakistan. In the early 1970s Indira Gandhi did look like the Empress of India.

However, the honeymoon with India's society did not last long. A combination of bad economic conditions, unwise policy decisions and pro-found changes in society contributed to make India less and less govern-able. Indira Gandhi's response consisted of a marked shift towards authoritarianism, which eventually led her to suspend democracy in July 1975 and to declare a state of emergency. However, India had enough anti-bodies to restore democracy. In 1977 the electorate rejected Indira Gandhi and, for the first time since 1947, elected a non-Congress government.

The election of the Janata Party (an alliance of all major non-Congress parties, barring the communists) led many to think that the one-party-dominant party system had come to an end and that Indira Gandhi had been "consigned to the dustbin of history", as Atal Vajpayee, Foreign Minister of the Janata Party, said (BBC News, 28 October 2004).

However, the government lasted for just a little more than two years before disintegrating under the weight of its own internal contradictions. Indira Gandhi made a spectacular comeback at the 1980 general elections. It is with the apparent restoration of the party's dominance over India's political system that our story begins.

A Strange Decade The 198os was a "strange decade".4 The strangeness of the period stemmed from two sets of reasons. First, as I will try to show in this book, the 1980s was a period of intense political and economic change. A brief comparison with some recent events will clarify the point. In early December 2011, the Congress-led United Progressive Alliance (UPA) government decided to permit foreign direct investment (F D I) in the multi-brand retail sector. The decision sparked off vehement protests not only among the opposition ranks, but also within the UPA itself. The opposition managed to paralyse Parliament for several days. Mayawati, leader of the Uttar Pradesh-based Bahujan Samaj Party (BSP), accused Rahul Gandhi, Congress's General Secretary and great-grandson of Jawaharlal Nehru, of pushing for allowing FDI in the retail sector to favour his "foreign friends" (The Hindu 26 November 2011).

Within the UPA, Mamata Banerjee, the leader of the Trinamool Congress-a regional party from West Bengal-managed to put enough pressure on the Prime Minister, Manmohan Singh, and his Finance Minister, Pranab Mukherjee, to make them "suspend" the decision until all stakeholders-political parties and chief ministers-reached an agree-ment (The Hindu 07 December 2011). Long-time observers of Indian politics will not fail to see how the way in which events unfolded in the just mentioned episode would have been inconceivable in 1980. First, opening the ownership of the retail sector to foreign investors was just not imaginable in the early 1980s, especially for a Congress government, whose leader did not miss a chance to see a "foreign hand" in whatever problem arose in India. Second, that a regional party had the strength to block a central government policy was out of the question, given the absolute majorities enjoyed by the ruling parties at the centre from 1952 to 1989. Indeed, the very attempt by a regional party to block a national policy was not imaginable in the political scenario of the 1980s. Such a party would have been dubbed as secessionist or anti-national. Third, the government would have not risked its stability for a policy that could easily be seen as one favouring exclusively the urban middle class and the big industrialists. Fourth, although few doubted that Mrs Gandhi planned to pass the prime ministership to her younger son, Sanjay Gandhi, dynastic politics was by no means rooted yet. If all this was not conceivable in 1980, just five years later, the seeds of political change had been sown, as we will see in the course of this book. Steps had been taken to liberalise India's economy; regional parties had acquired national relevance; the middle class and the big industrialists had been chosen as the government's major allies in the process of growth; the extremely smooth succession of Rajiv Gandhi to his mother as prime minister had "institutionalised" dynastic rule. The 1980s was a "strange" decade because it was an age of transition between an "old" and a "new" political scenario.

The second set of reasons why the 1980s was a "strange decade" refers to the nature of the dominance of the Congress (I) that was restored with the 1980 general elections and to the configuration of the party system. A fundamental theoretical assumption of this study is that "the way in which parliamentary democracy works depends, more than we may like to admit, on the balance of powers between political parties" (Morris-Jones 1957, 113).

During the first two decades after independence, the configuration of India's party system as a "Congress system" (Kothari 1964) allowed the party to function as a consociational mechanism (Lipjhart 1996). In short, the Congress party, through an extensive and complex patronage system, ensured the inclusion of most groups of India's society within its fold (Brass 1984a; Brass 1984b; Weiner 1967). This was one of the key reasons why democracy consolidated in a highly fragmented and extremely poor society. In fact, in the 1950s, few were ready to bet on the sustainability of democratic rule in India. However, the dominance of the Congress party and its vibrant internal democracy helped in democratising the whole political system. The Congress organization became an impressive machine for patronage distribution and the extraction of votes, contributing to the permanence of the party in a dominant position and to the governability of the political system. 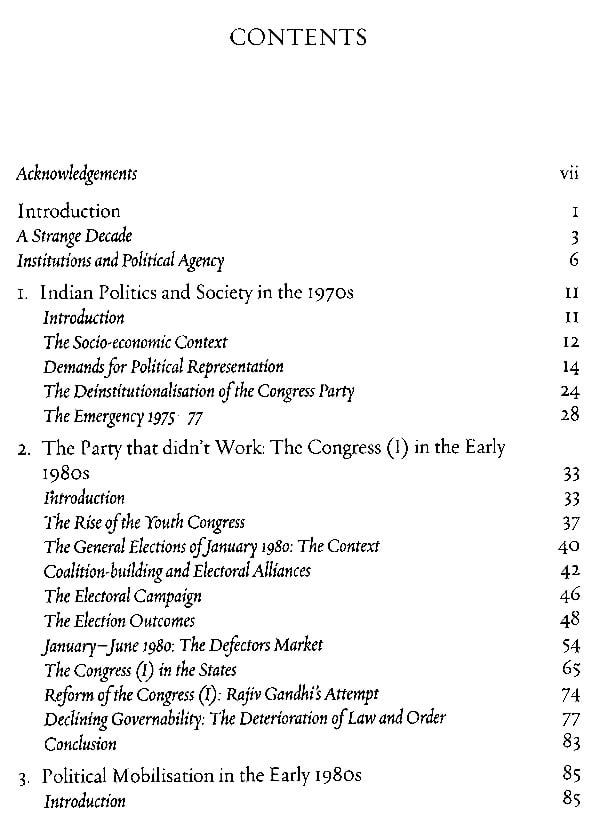 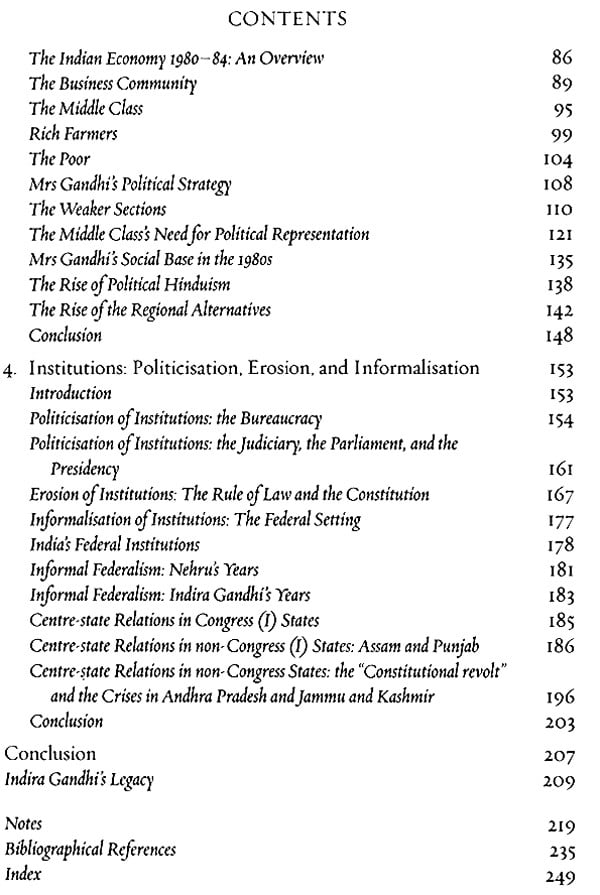 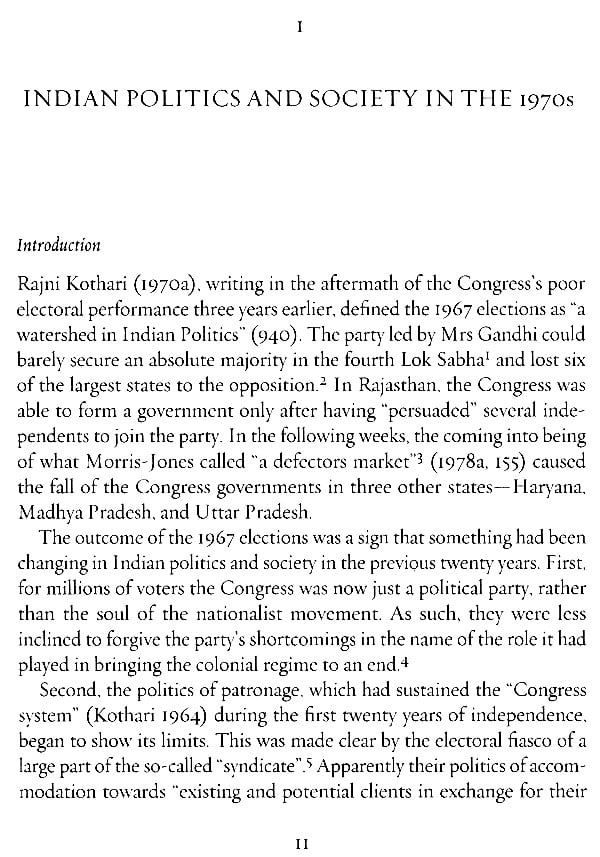 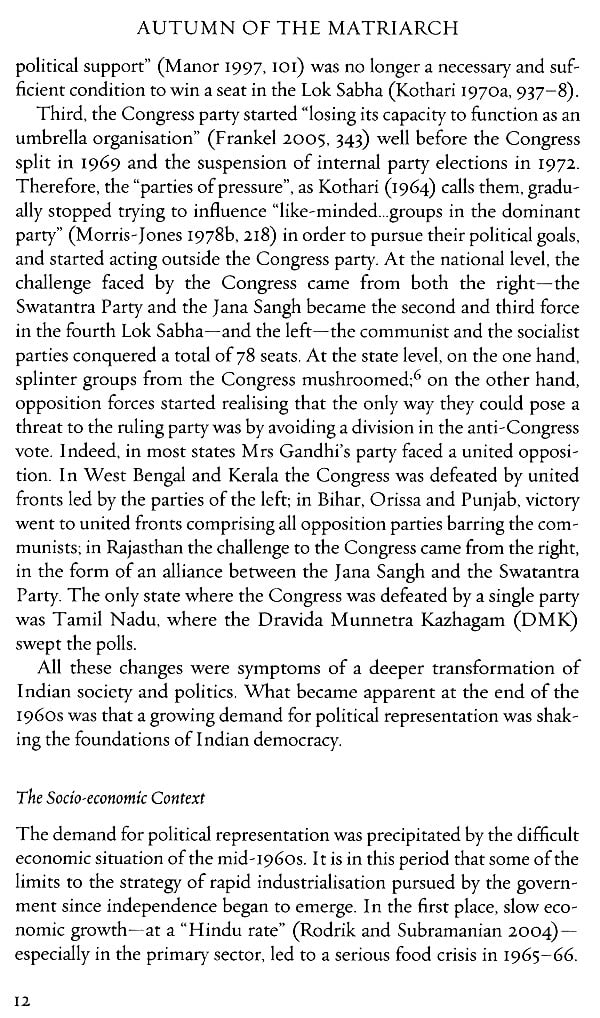 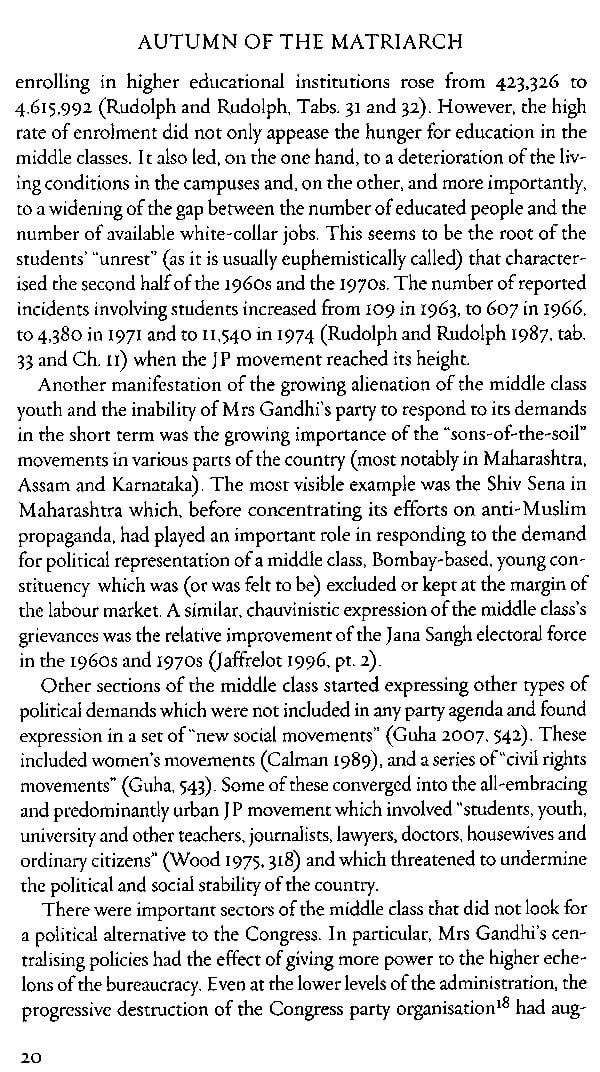 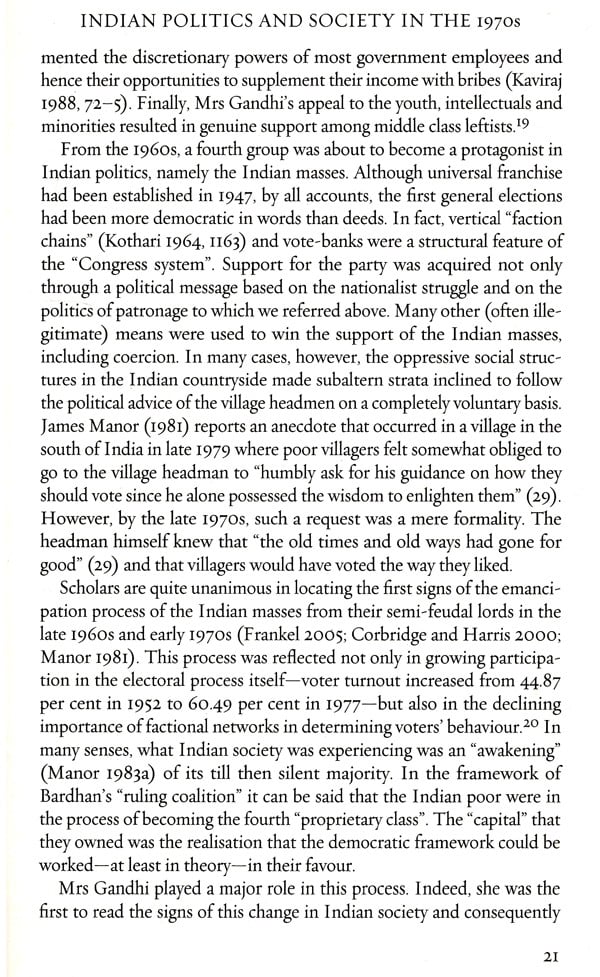 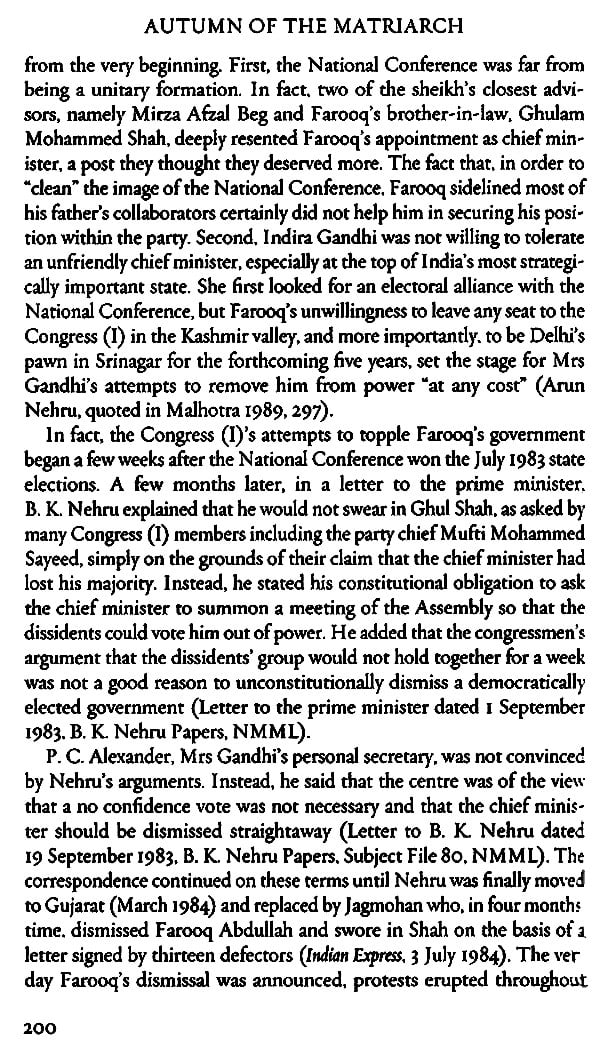 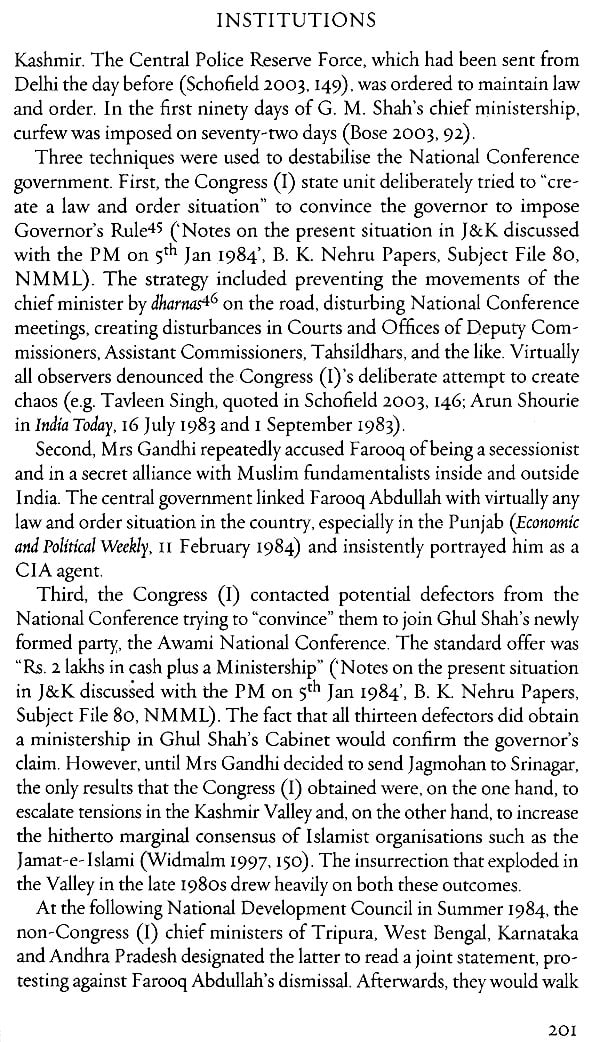 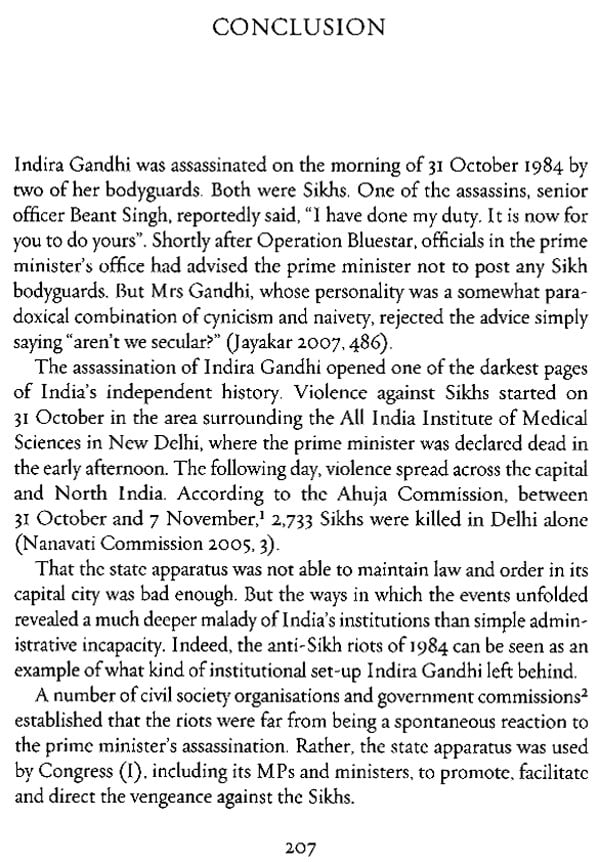 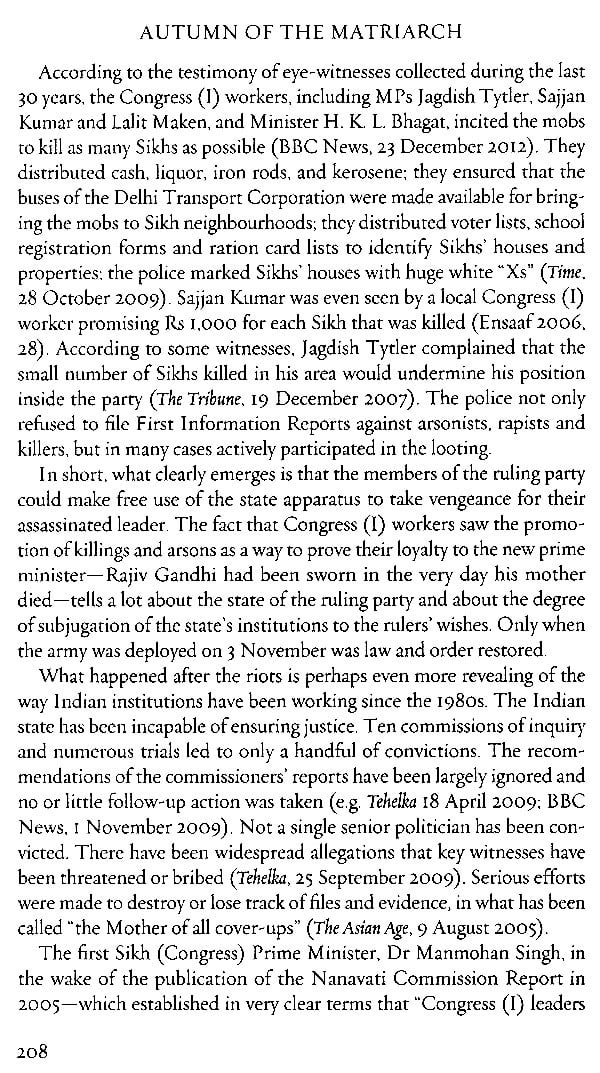