The Best Mistakes of My Life

‘My life has been like a giant explosion, a very exciting and vibrant life.’

Once deemed the most handsome man in Bollywood, Sanjay Khan’s tryst with fame and stardom led him on many adventures across the world. He is best remembered for his performances in films like Ek Phool do Mali and Abdullah as well as his portrayal of the great Tipu Sultan on television. In this exclusive autobiography he bares the details of a life full of action, excitement, drama, tragedy and, above all, courage. Written in a witty and engaging style, the book speaks of his formative years, his relationships with family, friends and co-stars, his interactions with world leaders, the stories behind his most remarkable films, and the fire on the set of The Sword of Tipu Sultan that almost killed him. Honest, engaging and revelatory, The Best Mistakes of My Life is the story of a star and a survivor, who has resurrected himself with a vengeance each time life has thrown a curve ball at him.

Sanjay Khan is a renowned actor, writer, director and producer with a highly successful career in the motion picture industry. The lead actor in over forty films, including Ek Phool Do Mali and Dhund, he was the poster boy of Bollywood and given the title of ‘Jubilee Star’. He has received theGem of India Award for Excellence [1993], National Citizen’s Award [2001], Life Time Achievement Award [2009] and many other honours in movies and television for mega serials like The Sword of TIpu Sultan, The Great Maratha and Jai Hanuman.

Men at some time are masters of thie rfates:
The fault, dear Brutus, is not in our stars,
But in ourselves that we are underlings.

Any life will face what Shakespeare called the ‘slings and arrows of outrageous fortune’ which buffet our lives about, but, as Cassius says, it’ s what we make of that fortune that distinguishes us and builds our characters.

The facts of life speak for themselves. But do they tell the whole story? I have beenthe star of many major blockbusters that are remembered to this day. I remember the rush of producers to sign me in as many as 100 films as a leading man. I was heralded in the press and in public opinion as the most handsomest of the Indian film industry and earned both fame and awards, national and international. I worked with the sense of the leading producers and directors of the industry and co-starred with talented and beautiful leading ladies, produced and directed three major motion pictures, and produced several mega, monumental TV shows. I hope that in the following chapters (and, gentle reader, I insist that this is a youthful autobiography, so don’t go looking for my age on the Internet!) I have successfully captured not only the excitement of those years, but conveyed my thoughts and ideas of what films did and could mean for the development of India.

In the midst of my rising film career, I was indeed, much against my will, because I am not superstitious, to allow a fortune teller to draw up my kundli, my predictive horoscope. The fortune teller prophesied that I would meet with a fatal accident around the age of forty-xix; if I survived, I would make a big name for myself.

My life has been like giant explosion, very exciting and vibrant. Even as a child, I sensed that I was blessed with something special when my friends would ask me to narrate stories and listen spellbound. My voice and style of narration become popular in my gang and perhaps foreshadowed my life in film. Of course, at that age, I couldn’t even imagine the experiences, challenges and thrills, or the fame, flattery, disappointments, triumphs, awards and adulation that awaited me, let alone the life-threatening accident which was to occur. I could in no way have anticipated the exciting times and exotic places, where my career in films would take me.

In later stages of my recovery, I began to get restless and aching to go back to India. The shooting of The Sword of Tipu Sultan was in full swing and I knew that several episodes had already been restriped and shot without me. This played on my mind and when Dr. Bogomal and Dr. Scott Spear were both visiting me in my room one day, I asked them to release me as early as possible, explaining that it was very urgent that I get back to work.

The two doctors looked at each other and then back at me with puzzled looks on their faces. It was Dr. Bogomal who finally exclaimed, ‘Mr. Khan, you must be joking. You can never work again. Your survival itself makes you a one-in-a-billion case. Surviving the trauma of sixty-five per cent third-degree burns combined with over seventy operations can only be described as a miracle. You are a miracle man, Mr. Khan!’ I did appreciate the gravity of what the doctor was saying, but I was undeterred and replied, ‘I have to work. I will die, if I cannot work.

Thirteen months later, like a phoenix rising from the ashes, I returned to claim my life back and rebuild it once again. The fire merely interrupted the saga of the sword but could not extinguish it; The Sword of Tipu Sultan is still remembered as a classic.

Branching out from my acting career into something entirely different-real estate-I built the luxurious five-star Golden Palms Hotel and Spa in Bangalore, which became a popular destination for people from the city and abroad, and was host to many artist friends who came there at my invitation to write screenplays and compose music.

Yes, the facts speak, but they don’t tell the whole story. How much of a life’s fulfilled ambition is the consequence of hard work and innate talent, and how much of it is the hand of circumstance, of luck, of being in the right place at the right time? It’s not a question that can be answered with any certainty. But, what I have found, in the course of penning this autobiography, is that in addition to being a medium for sharing the facts and the stories, the act of writing itself is a process of self-discovery. Yes, that happened, but how did it come about, and why?

I hope that I have been successful in conveying to my readers the adversities and joys, the twists and turns, the surprises and unexpected adventures in as diverse places as Russia, Turkey, Iran, London, Dubai, Mauritius, New York, Los Angeles and so many more. But in the midst of all these, I am most proud of having fulfilled my duty as husband and father. My children received a good education, learnt good lessons, learnt good manners, to be patient, to be giving and to help and respect their elders and fellow human beings. These principles may seem like standard fare in any Indian household, but they have steered my life, having been passed on to me by my honoured father and mother whose kindness and compassion for the weak and poor remain a beacon in my life. I remember my mother’s words, which have influenced me throughout my life: ‘Son, you’re the hand of God, and God is guiding you to help people.’

My family is what I treasure most in this world. I am thankful to the Almighty, who has blessed me with the most wonderful partner, guide and navigator on the ocean of life; m wife, Zarine. Fortunate is the man, who have such a loving family; Zarine; our other three wonderful daughters-Farah, Simone, and Suassanne: an adored son,Zayed, and his wife, Malaika; and three sons-in-law-Aqil, Ajay and Hrithik, who, although divorced from Sussanne, is the father of my two grandchildren.

A banker once asked me my net worth and the question made me smile. I could have told him about the vast fortune I had accumulated, lost and regained. But these are the ups and downs of material existence and I am not overly concerned with them. The gains didn’t elate me and the losses didn’t defeat or depress me. I smiled as I replied, ‘Please take a headcount of my wife, our four children, our nine grandchildren, three sons-in-law and one daughter-in-law. Now, attach a value to each one of them and total the figures. You’ll arrive at my net worth.’ The banker smiled back and shook my hand.

I hope, through this book, to pay sufficient tribute not only to Zarine and our children and grandchildren, but also to my late brother, Feroz Khan, who was and is always with me; my guru, Satyen Bose and Chetan Anand, both of whose fame hasn’t touched, and who wouldn’t want it to. All have been equally valuable and I honour them all. I must mention one friend in particular: Raj Kapoor, my childhood idol and my inspiration for entering films. He was a huge influence on my professional life, and a very respected friend with whom I shared a special bond, and whom I miss a great deal.

Chance meetings can often have a great impact on one’s life, as this small anecdote exemplifies. In the late 1960s or early 1970s, I was privileged to meet David Lean, the director of classics like Lawrence of Arabia and Dr Zhivago. I was rushing into a restaurant in The Oberoi, New Delhi, when I heard someone calling out my name. When I turned and looked back, a woman introduced herself as Leela Lean, who, I knew, was David Lean’s wife. In the same breath, she said that her husband was there and wanted to meet me. I was truly elated. Leela led me to their table. David got up, shook hands with me and offered me a seat, simultaneously asking the waiter for two double Scotches.

I said to him, ‘Sir, I’m a big fan of your work. I have watched all your films. You are my god in films!"David smiled and thanked me god and thanked me. In the conversation which ensued, I asked him two questions and I remember to this date the answers he gave.

I asked him: ‘What is a perfect script?’

He replied: ‘A perfect script is one which answers all questions.’

My second question was: ‘What is perfect acting?’

He replied: ‘If the actor thinks right, that is perfect acting, because the camera catches the "think".

I have treasured the memory of this chance meeting all my life.

I hope my readers will see that, through the pages of this book, I have tried to convey truthfully my experiences, thoughts and belief, and how much I appreciate the contributions which so many people have made to my life. 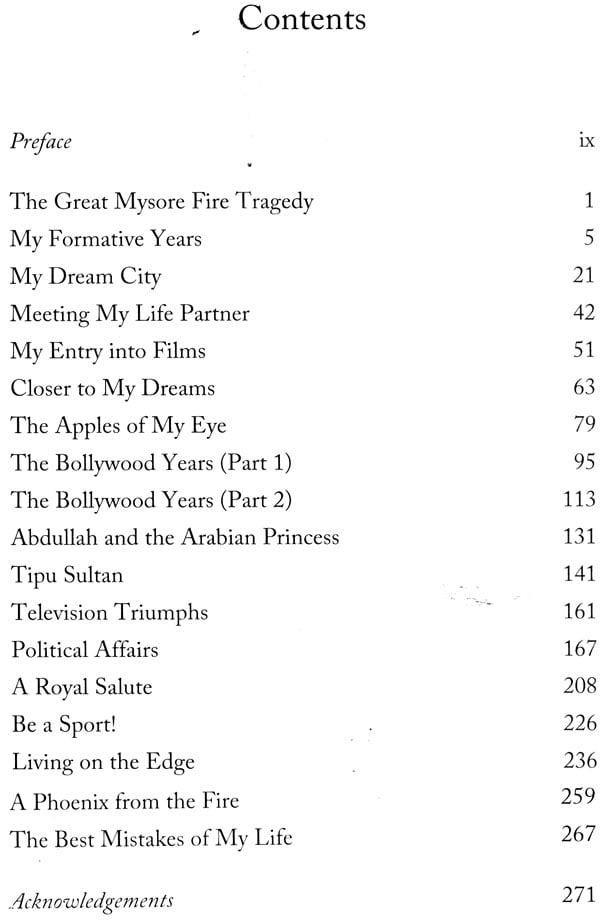 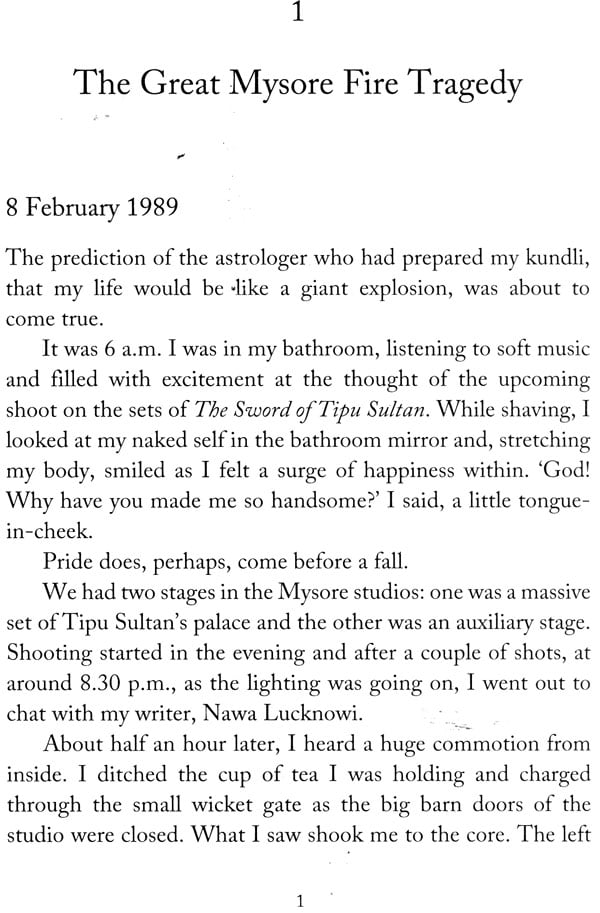 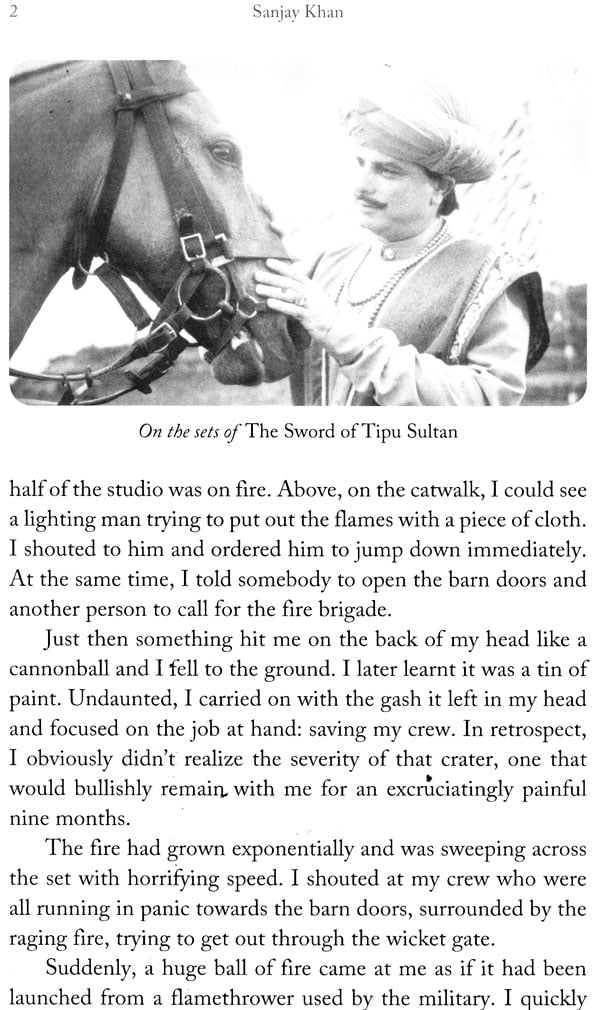 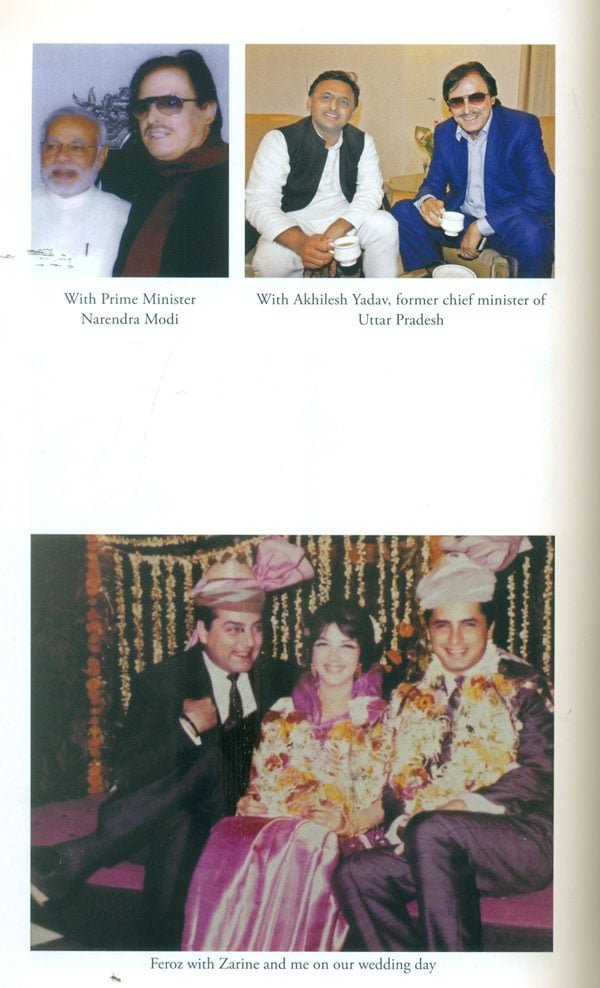 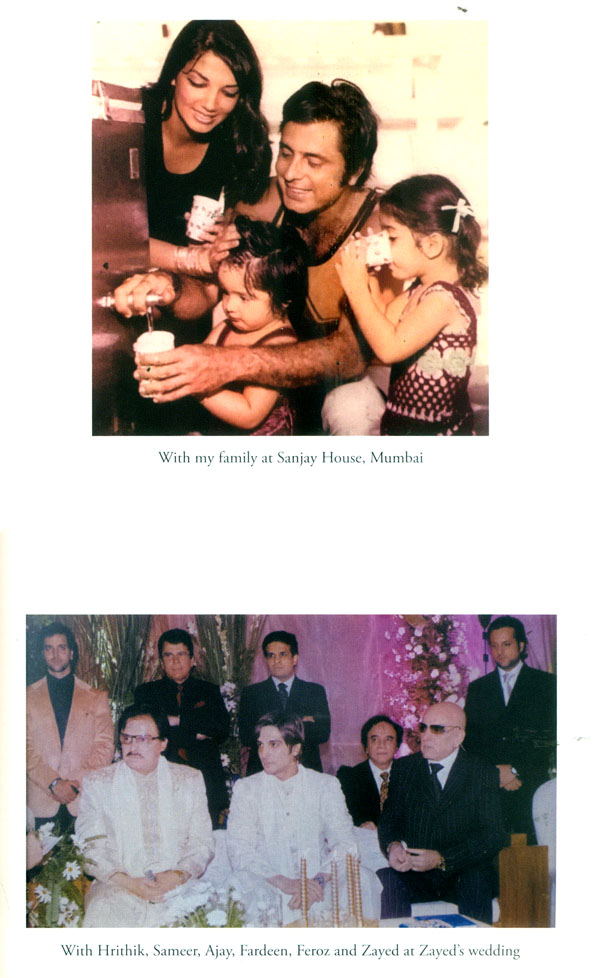 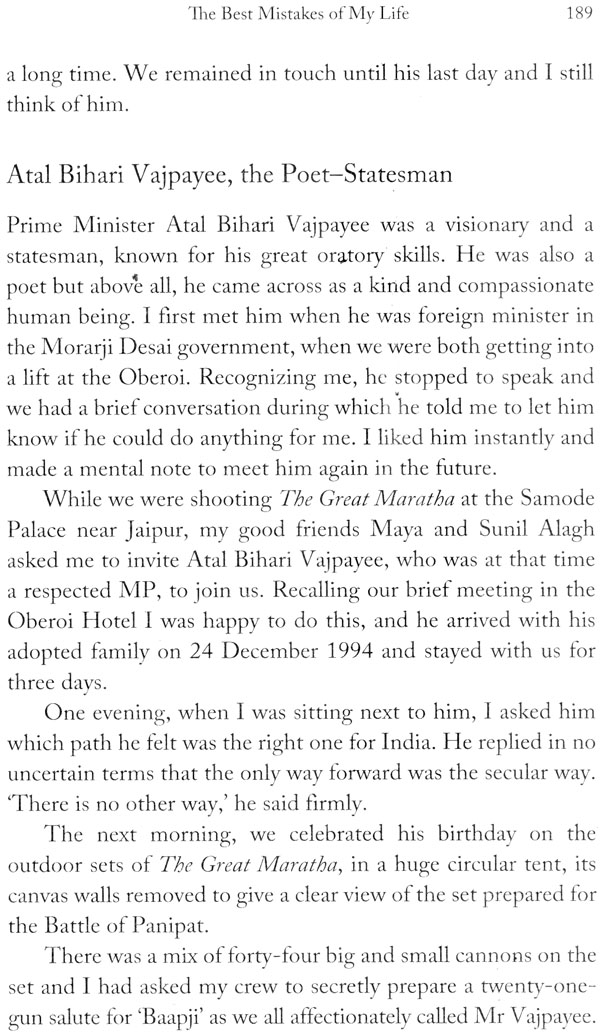 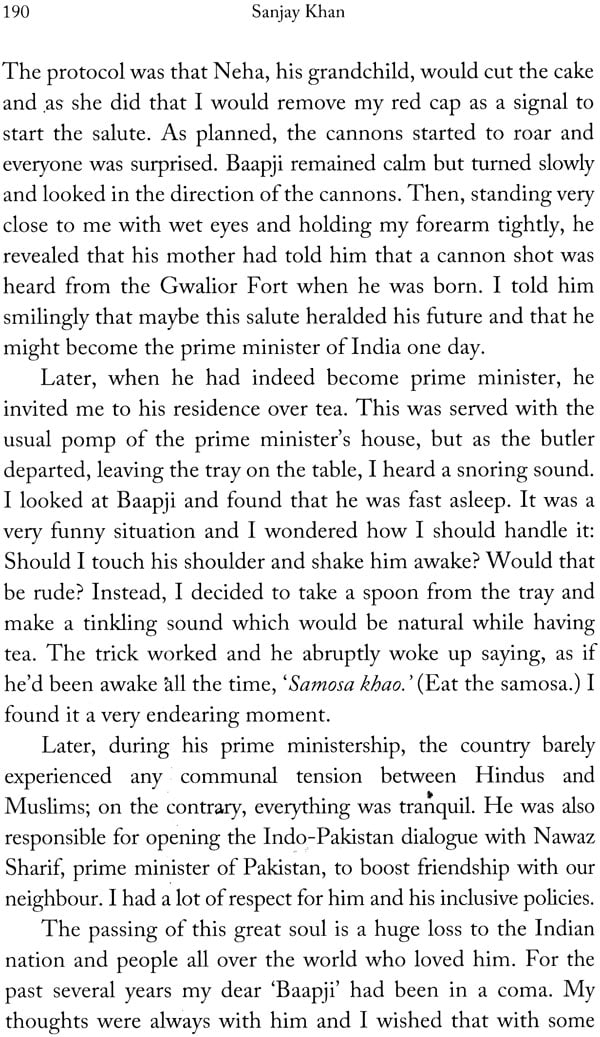