Ancient Indian cultural heritage handed down to us offers little more than traces of history and chronology. From the society point of view, the composition Bhartrihari Tri-Sati (Niti-Sringara-Vairagya Satakas) in Sanskrit is a utilitarian rather than utopian classic of 300 stanzas, nuggets, arranged in 26 Sections, crafted in meaningfully melodious and superbly mellifluous Sanskrit diction suited for easy recitation as of a captivatingly pleasant water-fall in the background of vistas of verdant beauty, portraying the lasting values on Life, Love & Light, for the Family ofMan. The novel and fascinating presentation of the theme is apt to get closer to everyone in a friendly persuasion for an en core just by the first reading or better, hearing, and then linger on to seep into the minds as ethics of ennoblement, so relevant even to our modern social order to-day encompassing the young and old alike.

Shri D.S.R. Krishnamurti, a graduate from AC College, Guntur, studied law at the Andhra and Osmania University Law Colleges, Waltair and Hyderabad. He was enrolled as Advocate at the AP Bar in 1963. A Fellow of ICSI, and an Intermediate of ICWAI, he was in active practice as a Practising Company Secretary since 1980.

Shri Krishnamurti served many companies, including HAL & HMT. His latest stint was as the Company Secretary and Chief of Taxes, including Finance, of BrahMos Aerospace, a prestigious and strategic MNC operating as an Indo-Russian JV.

His career fielding of subjects included corporate and securities laws and practice, corporate economics and setting up of large green-field projects/start-ups, including registration of companies/societies, and administration, finance and accounts as well as corporate taxation, direct and indirect, covering foreign taxation of collaborations and MNC JVs at all levels, as going concerns.

During the five decades of working in corporate environment in Public and Private Sector companies, unlisted and listed, including participation as a member of the core-teams in the setting up of large Projects, Shri Krishnamurti published a number of articles of topical interest. He presented papers and served as guest faculty at a number of National and Regional Seminars and Conventions.

He served as a Member on the Committees of Company Law and Taxes of Federation of AP Chambers of Commerce & Industry, Hyderabad and as Member and guest faculty of ICSI Chapter at Hyderabad for a number of years till the mid-1990s.

Ancient Indian cultural heritage handed down to us offers little more than traces of history and chronology. There was no history-consciousness at all and all accounts of great and heroic achievements recreated in the Classics that have survived the ravages of time are mostly fantasies of grandiose imagination and not handy as historical facts. Again, those give little or nothing about the eminent and everlasting authors who composed and left the classics as priceless legacy to posterity including the greatest of them all, Kalidasa. Bhartrihari is no exception, in spite of his being a Raj Rishi and an author of distinction.

From the society point of view, the composition Bhartrihari Tri-Safi (Niti-Sringara-Vairagya Satakas) in Sanskrit is a utilitarian rather than utopian classic of 300 stanzas, nuggets, arranged in 26 Sections, crafted in meaningfully melodious and superbly mellifluous Sanskrit diction suited for easy recitation as of a captivatingly pleasant water-fall in the background of vistas of verdant beauty, portraying the lasting values on Life, Love & Light, for the Family of Man. The novel and fascinating presentation of the theme is apt to get closer to everyone in a friendly persuasion for an en core just by the first reading or better, hearing, and then linger on to seep into the minds as ethics of ennoblement, so relevant even to our modern social order to-day encompassing the young and old alike.

Bhartrihari Trisati, particularly the first part of Niti Sataka comprised of its many select verses from all sections and in some singular verses from the other two Satakas, fortunately has remained popular in most homes as common heritage to this day in Andhra Pradesh because of the equally eminent and mellifluous Telugu rendition in verse as if it were his original and independent composition called Subhashita Ratnavali Kavyamu popularly known as Bhartruhari Subhashitamulu in three parts by Aenugu Lakshmana Kavi, in a live demonstration of the force of verse in creating an impression working to pause to ponder over the ethics of ennoblement on the social psyche about Life, Love and Light as related by the good words of Bhartrihari.

Bhartrihari is doubtfully placed to belong to 7C AD by the historians [see Ancient India by R.C. Majumdar at page 439]. Folklore, however, has it that he was the immediate predecessor of the legendary Emperor Vikramaditya, who is credited to have founded the City of Ujjain with the blessing of Mata Kali on the banks of the River Gunavathy in the Vindhyas, and the pre-existing Temple Diety there is known even today as Ujjain Mahan Kali. In the popular perception, the Vikram Era [with Deepawali as the New Year's Day in the middle of Sharad Ritu is held high in the Vedic Tradition in Gujarat for the auspicious Moorat Trading on the Bombay Stock Exchange on a holiday evening for an hour after Dhana Lakshmi Pujan. This tradition is also evident in blessing of the elders for the newly-wed couples to prosper Saradassatam, meaning a hundred lovely Sharad Ritus ahead. The Vikram Era is believed to have been established in 58 BC by Vikramaditya, but, there is no Vikramaditya of the legend known to recorded history, nor, are the historians agreed to his founding the Vikram Era. Of course, Ujjain, as a place figures in the earlier Asokan Edicts of 273-232 BC.

According to a verse popular amongst Sanskrit scholars the origin of which is unknown, the reputed Nines Gems (Nava Ratnas) of Sanskrit authors of yore adorned the Court of Vikramaditya, and Kalidasa was one of them ranked with Dhanwantari, Kshapanaka, Amarasimha, Sangku, Betala, Bhatta, Ghata-Karpara and Varahamihira.

There have been many Kings who assumed the title Vikramaditya before 5C or 6C AD and even later, and there is no clinching historical evidence of any one Vikramaditya's Court to show Kalidasa was its distinguished constituent. Further, of the Nine Gems stringed together, the formidable Sanskrit lexicographer Amarasimha who composed the Amara-Kosh in 3 Parts is believed to have lived between 414 AD to 642 AD; another legendary author Varahamihira of the eminent Indo-Greek-Tajak researched Brihajjataka, a treatise on Astrology, is believed to have died in 587 AD. On this basis and some supposed references to the Astronomical theories of Aiyabhata circa 476 AD in the works of Kalidasa on the one hand, and more importantly, the theory of some European scholars like Vincent A. Smith that having regard to the title of `Vikramaditya' assumed in common by 3 Kings of Gupta period II-

Kalidasa is speculated to belong to 5C or 6C AD.

However, looking at some of the literary and legal sources, some Sanskrit Scholars [See, Kumara- sambhava of Kalidasa edited by M.R. Kale, published by Motilal Banarsidas-Introduction, at page xviii] claim tnat Kalidasa must have lived and flourished under Vikramaditya of 1C BC only , on the basis of-

• The Mandsor inscription of 472 AD carrying several ideas of Kalidasa which point to the suggestion that he ought to have belonged to some date considerably prior to that date;

• Aswaghosha's Budhacharita in Sanskrit circa 78 AD carrying numerous passages similar to those found in Kalidasa's works pointing to the probability that Kalidasa was and Aswaghosha was not copied; and

• Shakuntalam (Act VI) and Vikramorvasiyam (Act V) refer to the state of law of the land regarding inheritance and the penalty for theft, strictly as originally propounded by Manu Smriti, Apasthamba and Vasishta-death as the punishment-but not 'fine' as modified by Brihaspati of the 1C AD-showing that Kalidasa belonged to some period before that date.

Whatever that is, it is known to history that the Sakas hailing from the area off Syr Darya [about the border between modern Uzbek and Kazakh] and Pahlavas [Parthians, of the Selucid origins] invaded India from about 160 BC onwards and both the races got mixed up in India. In that process and between them, they both closed in on the emerging unification of a major chunk of the country under one rule of the Satavahanas or Shalivahanas in their own typically different onslaughts.

Parthians stormed the Roman Empire, too, and earned the notoriety as the very anti-Christ horde-particularly feared for their parthian shot poor copy of Arjuna's classically grand spectacle of Matsya-yantra hit of Maha-Bharat fame to win Draupadi's hand--which was perhaps the ultimate in marksmanship in archery of the times of releasing the arrow while fleeing (real or pretended) on foot or equestrian back-wards to be sure to kill the pursuers coming running behind [may be on the principle of what is known to us now as the 'Doppler effect' in Physics, it named after the Austrian physicist Johann Christian Doppler of the 19C AD], and were branded as the agents of apocalypse or the end of the world by the devout orthodox Christians in 1 C AD, as reflected in the controversial Book of Revelation of the New Testament (taken as originally composed around 95 AD) replete with symbolic forecast of the world's doomsday brought about by the anti-Christ forces when God would descend on Earth with his army to finish them and re-create a new Earth and Heaven to be in perfect peace. 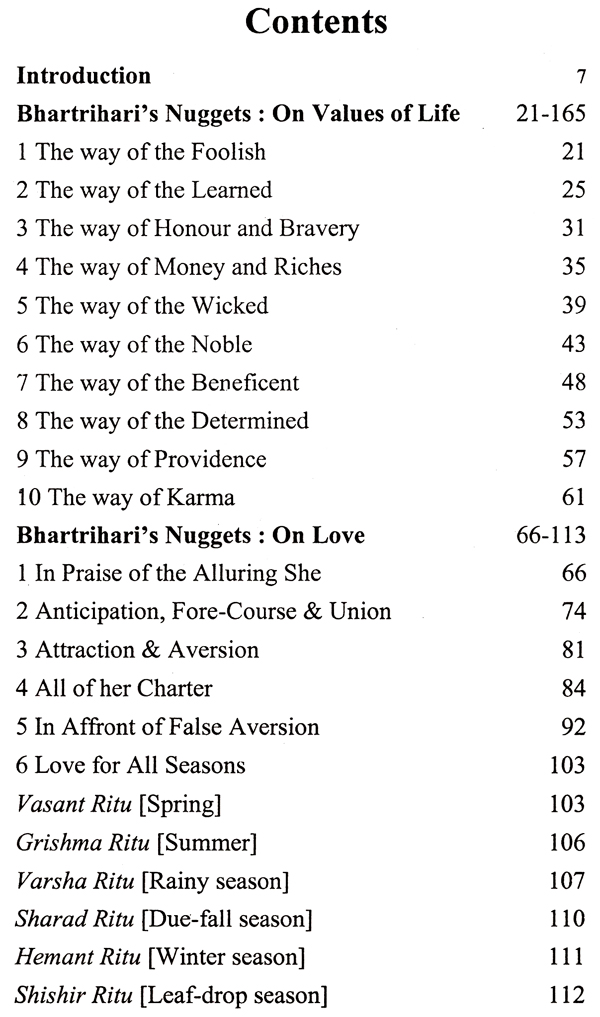 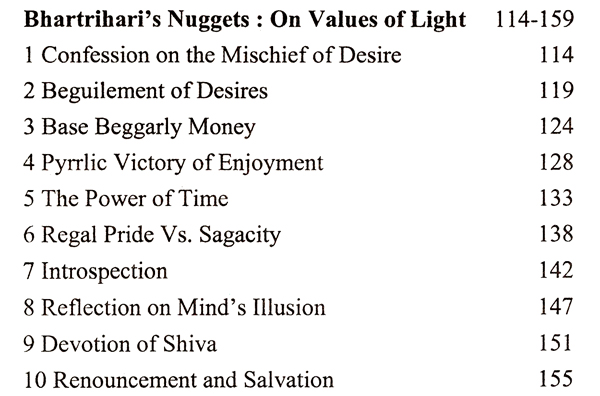 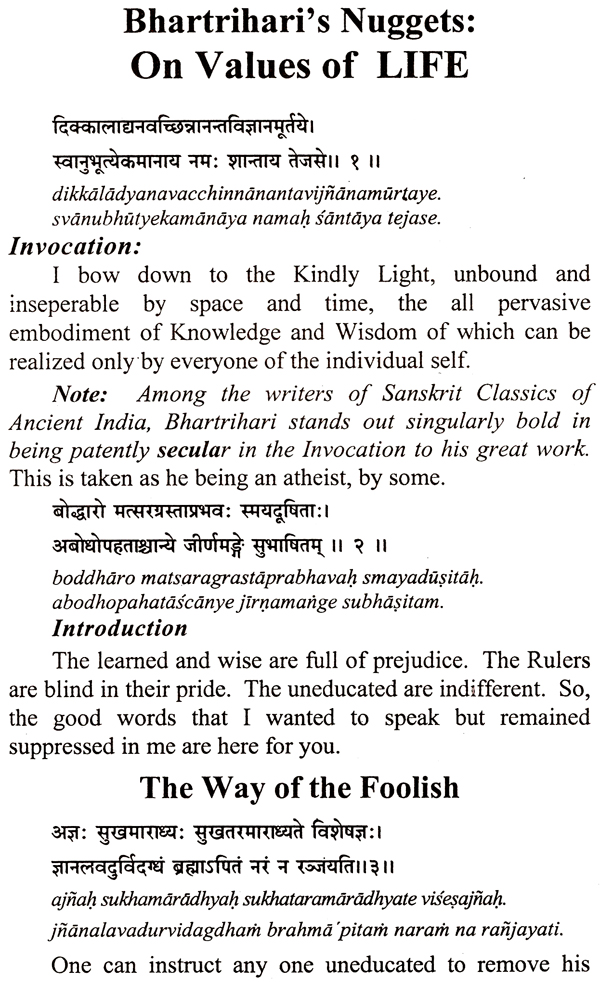 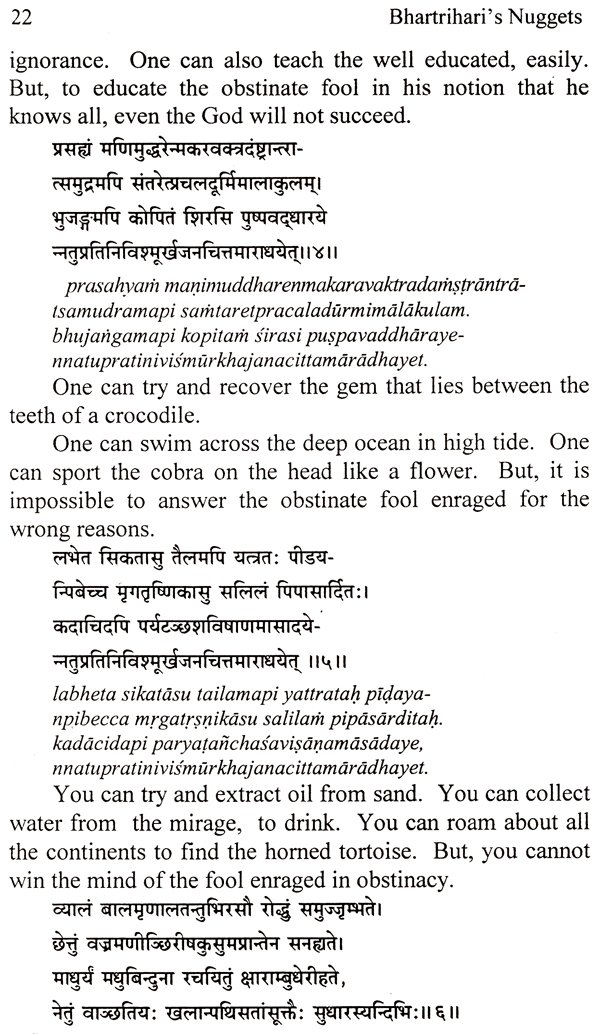 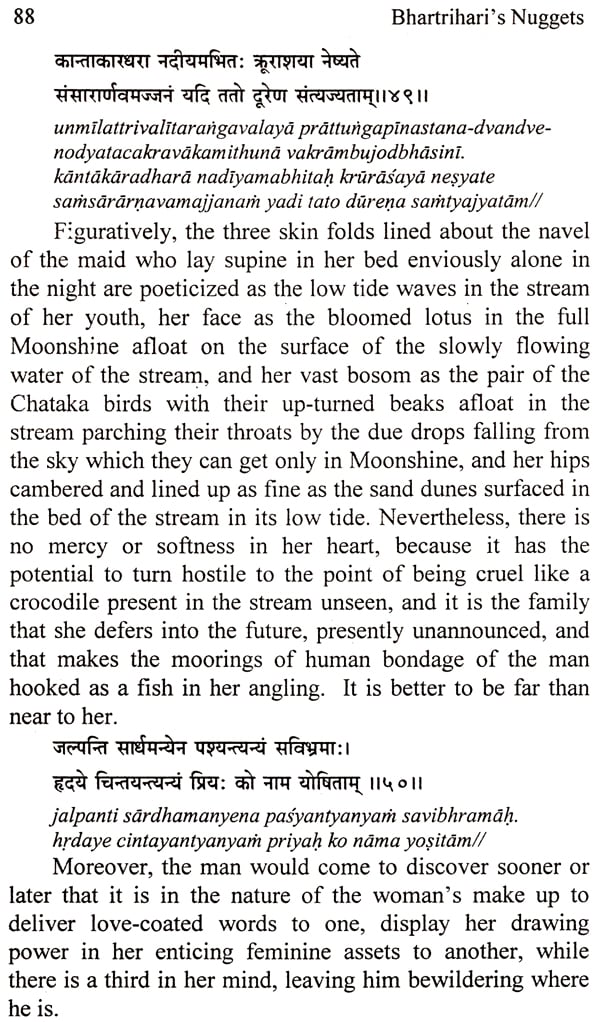 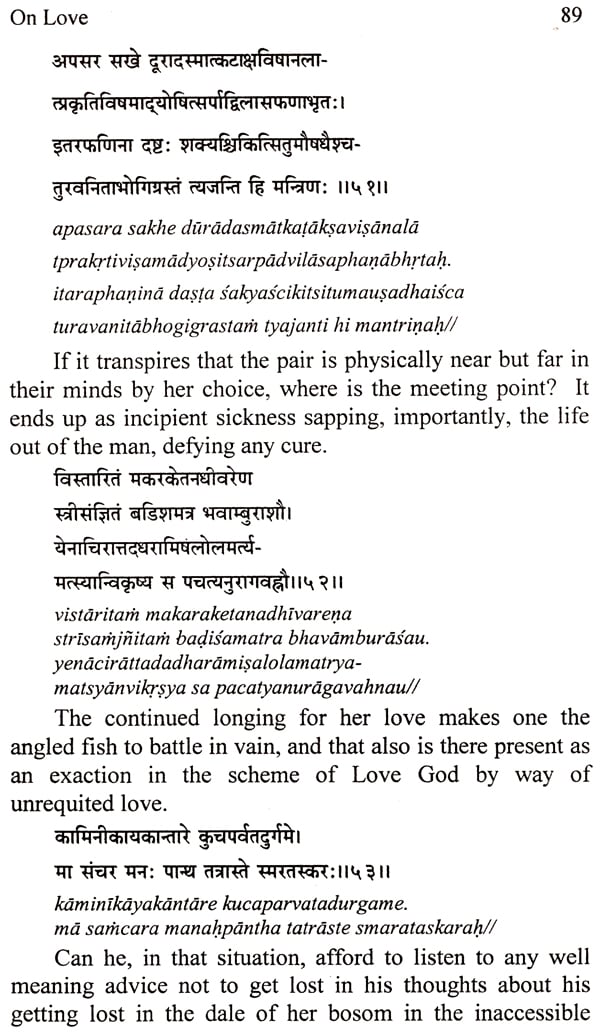 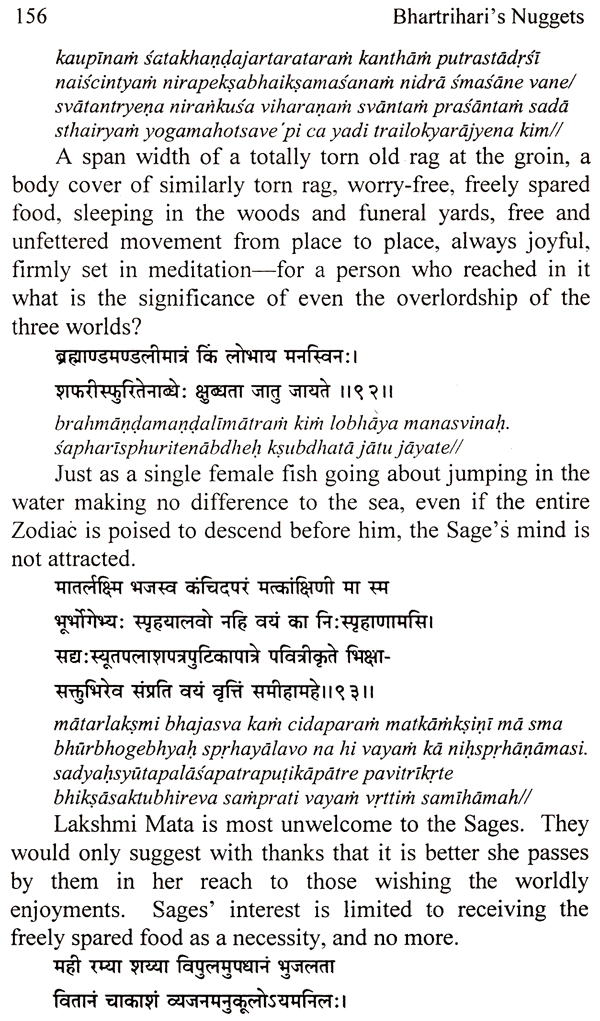 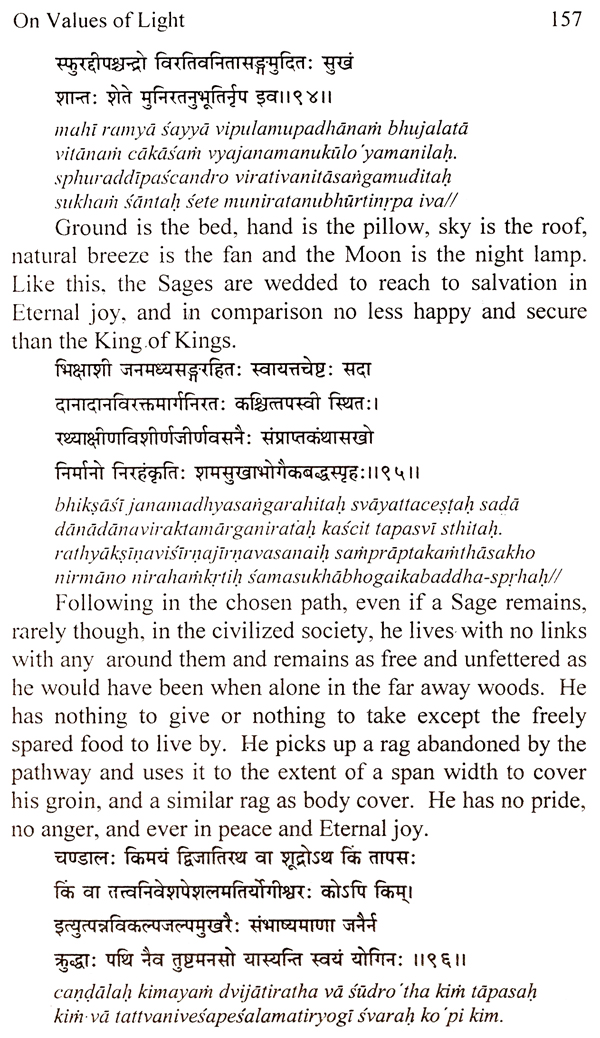 Vyakarana ki Darshanik Bhumika The philosophy of grammar according to Bhartrihari
By Satyakam Varma
$23.20
FREE Delivery
$29  (20% off) Atha Sringarashatkam: Sanskrit Shlokas on Sringara Rasa
By Rajendra Tandon
$24
Out of Stock Valient Vikramaditya
By Igen B.
$13