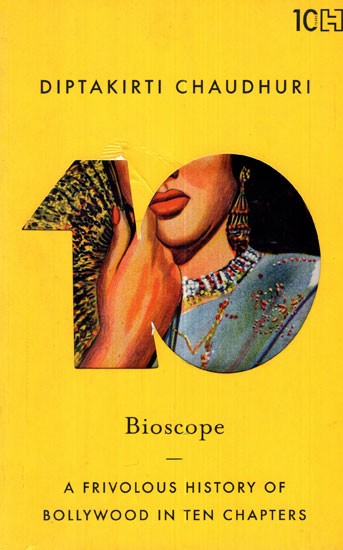 A non-linear, light-hearted rollercoaster ride of a book, Bioscope presents a quirky history of Hindi cinema through unconventional, curated 'lists' that will delight die-hard fans and novices alike.

Highlighting ten aspects that give Hindi films their distinctive flavour, the selections - of villainous types and hit pairs, genius compositions and unforgettable lyrics, memorable scripts and filmi fashion from the pre-Independence days right down to the present - pack in trivia, gossip, recommendations and deep insight.

By turns opinionated and emotional - and always superbly entertaining - Bioscope will inspire its readers to immerse themselves in the fascinating world of Hindi cinema.

Diptakirti Chaudhuri is a salesman by day and a writer by night. His primary passion and subject of writing is Hindi cinema, on which this is his fourth book. He lives in Bengaluru with his wife, son and daughter. They don't share his obsessive love for Hindi films. Yet.

HINDI CINEMA ISN'T ABOUT PLOTS. IT'S ABOUT SUBPLOTS. Often, it's about the flashback of the prologue of a subplot, with an 'item number' thrown in if the budget can be squeezed just that bit more. The story behind the making of all of the above is quite something else and certainly does not lend itself to a linear history given the happy, alluring chaos of the Hindi film industry.

The idea for this book was to thus explore the history of Hindi cinema in a slightly chaotic way, to probe the various aspects that make it so distinctive - and tie it all into a narrative that paints a picture of the industry that has brought to millions of people a century of entertainment.

Trying to fit in a colourful century's worth of action into a 200-page book has its pitfalls. For starters, one can expect die-hard fans to be up in arms, screaming

'Where's the chapter on directors?' 'Seriously? There's • no Ranjeet in the book?' 'So many brilliant biopics and these are the ones you've come up with?' 'Where are Salman and Katrina in the chapter on pairings?' 'I mean...who let you write this book?'

But, for better or for worse, here it is – a short volume that presents ten curated lists (of ten entries each) of things peculiar to Hindi cinema, giving a picture of how the industry has evolved. In no way is this a scholarly account; it is, from the first page to the last, a fan's personal view. The chapters are guaranteed to rekindle memories. They will certainly generate passionate debates. And at least some of them will trigger in readers a desire to injure the author in some way. Nothing that a friendly banter on cinema should not provoke...

Ultimately, the idea and structure of this book is to feed its readers' love for Hindi cinema. To make them look up some of the films and stars mentioned. To play some songs once again. To remind them of the first time they watched a film, or about a film they didn't manage to watch. Because that's what Hindi cinema does – it draws you back again and again. After all, it was Hindi cinema they were talking about when they sang, 'Sau saal pehle, mujhe tumse pyar tha, aaj bhi hai aur kal bhi rahega...' 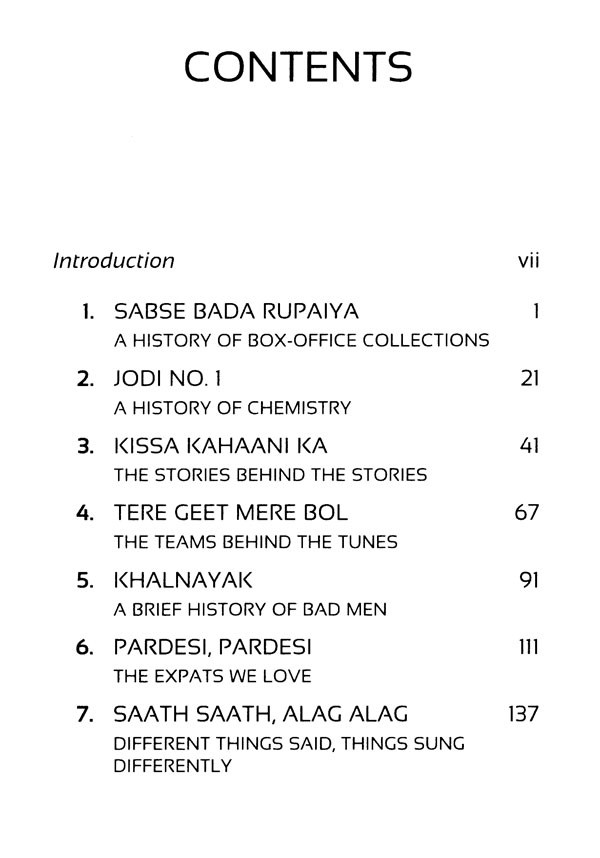 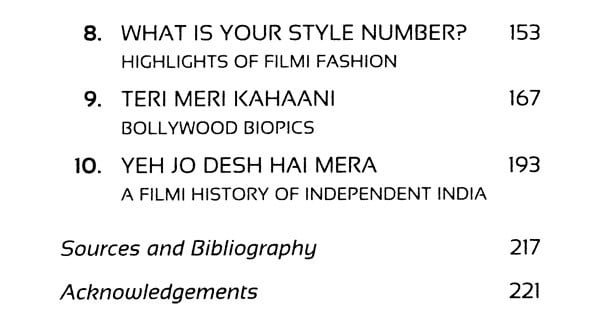 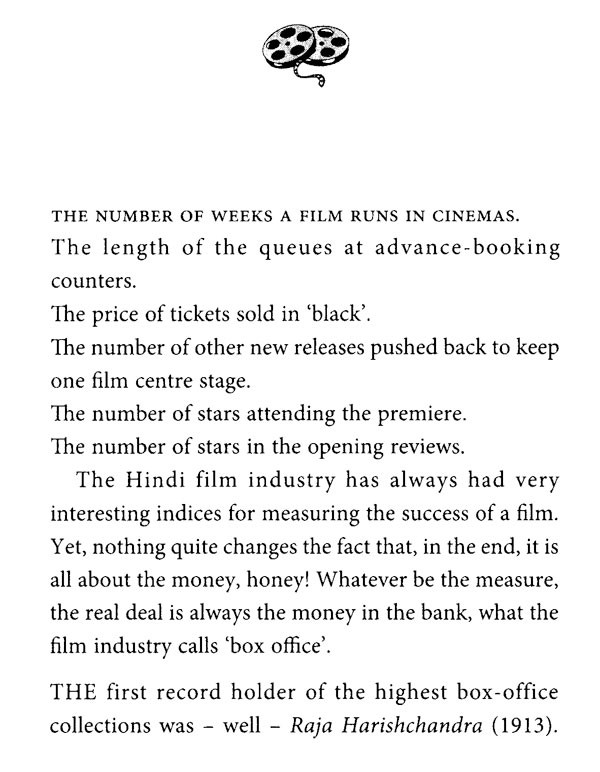 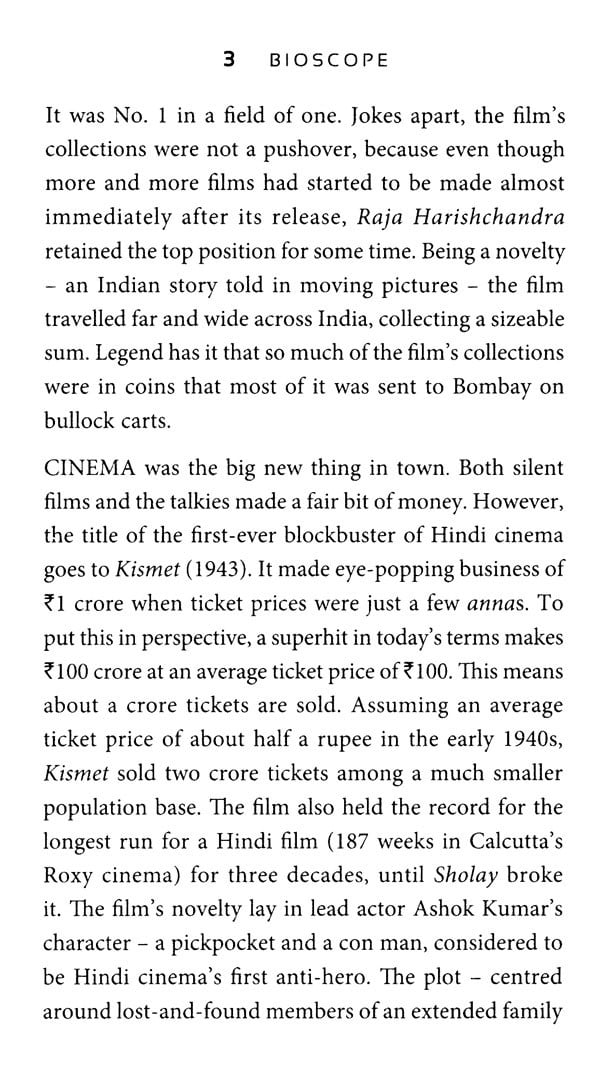 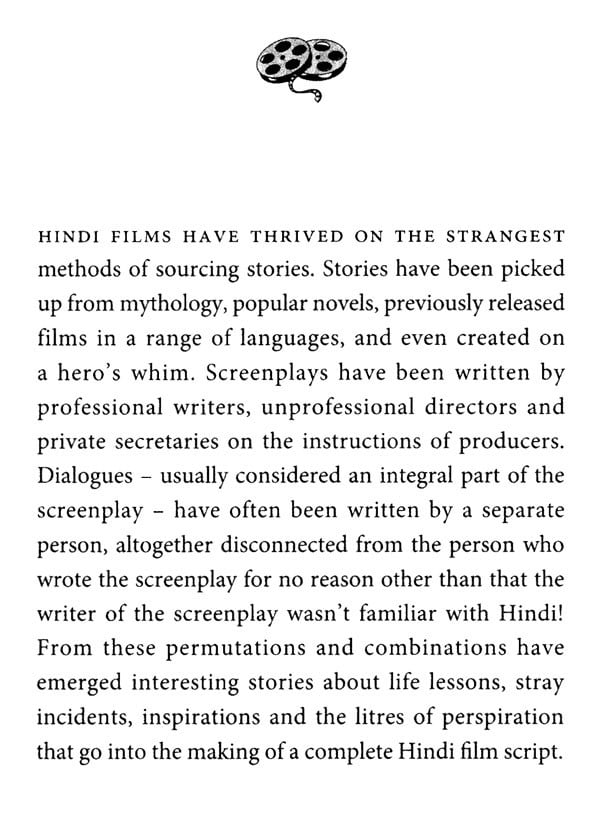 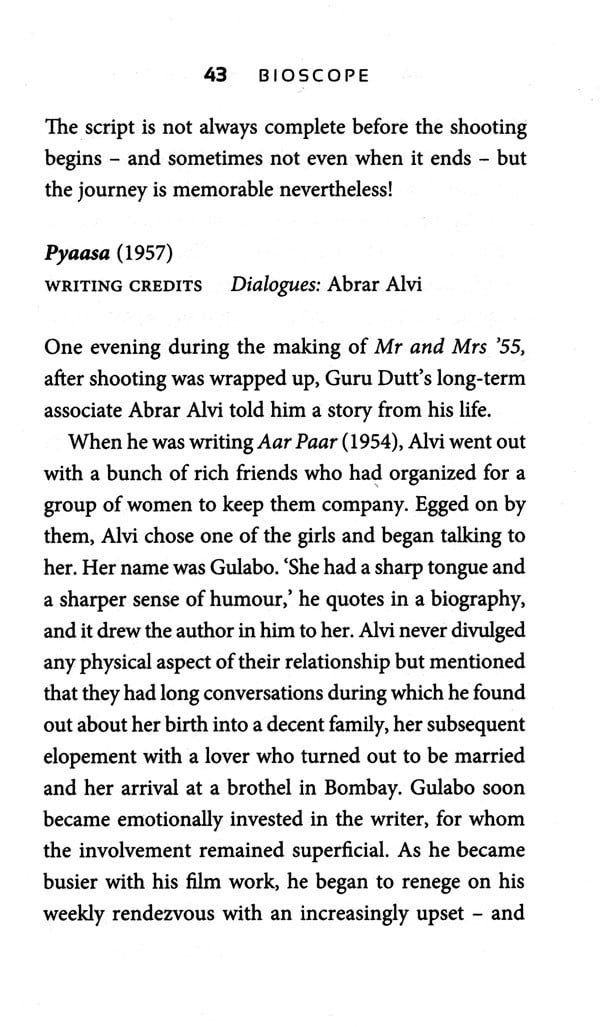 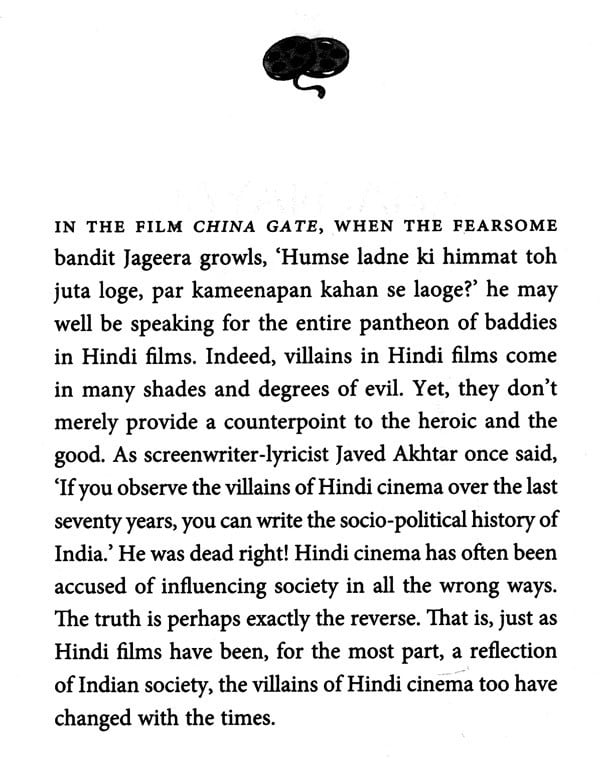 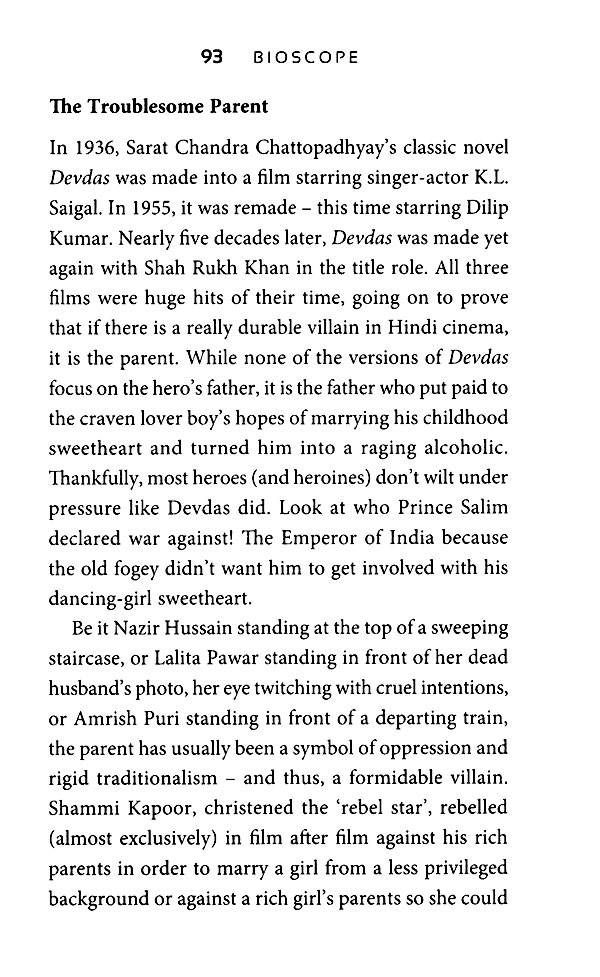 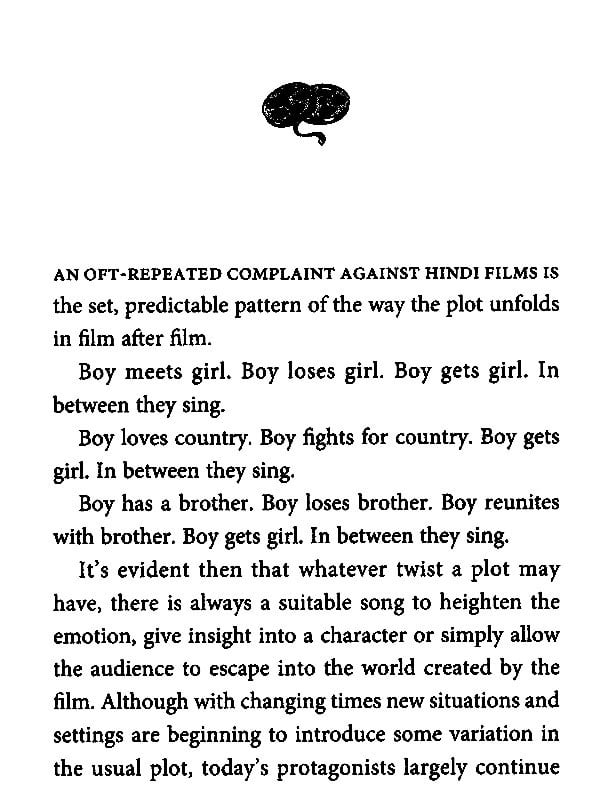 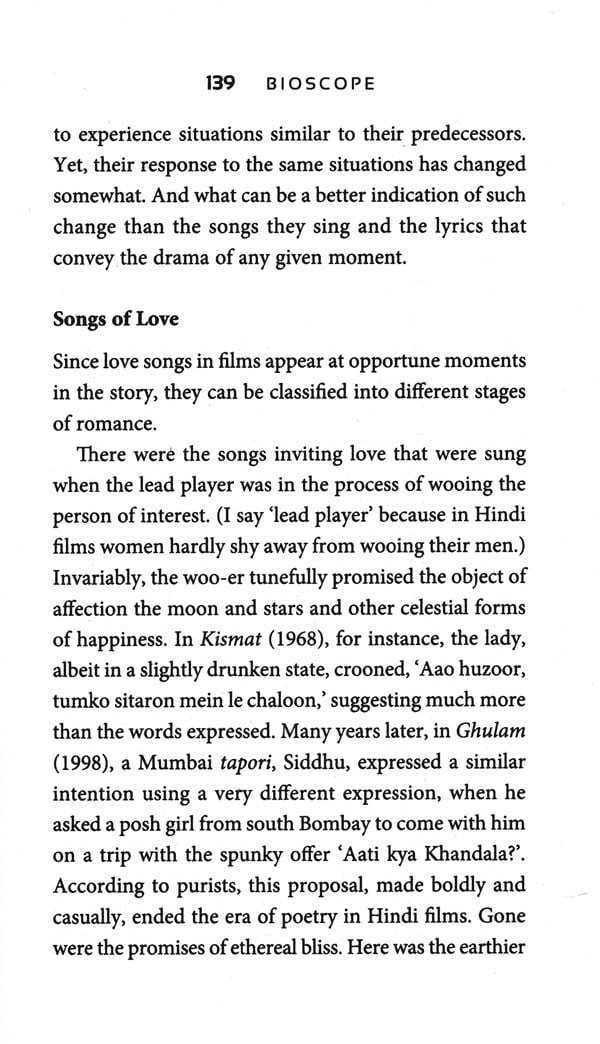 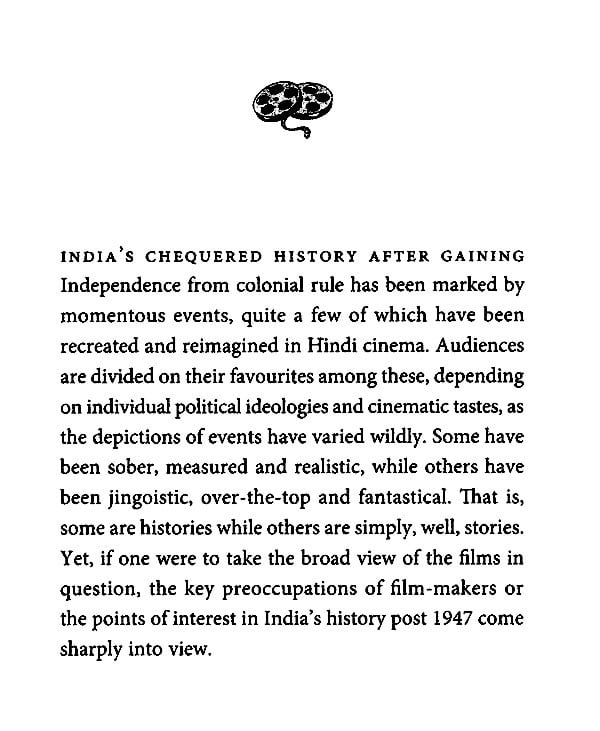 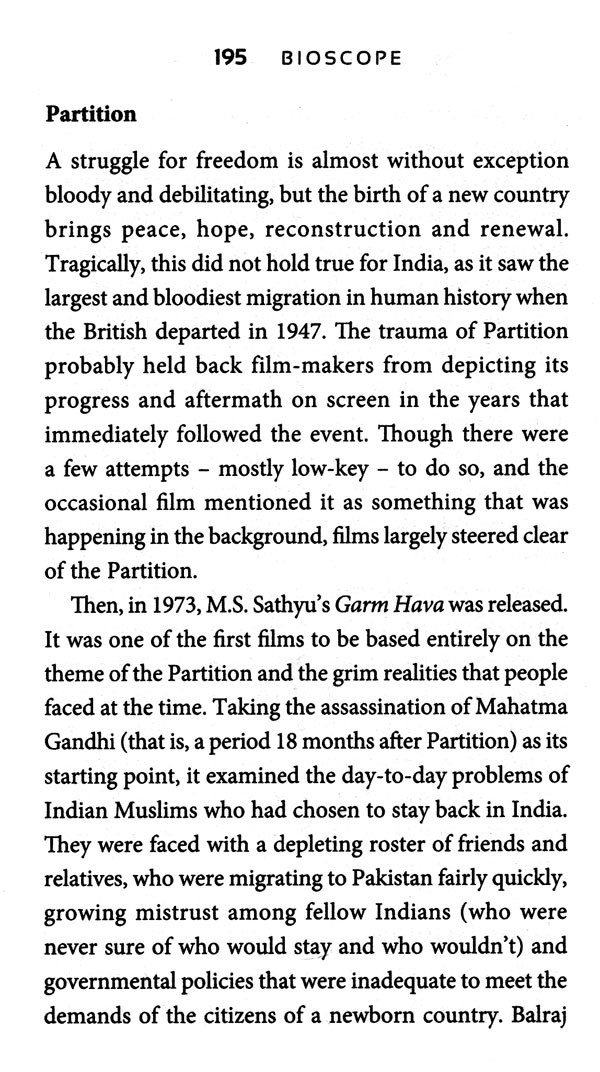