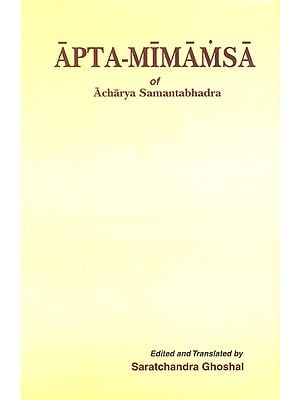 $24.00
Notify me when this item is available
Save to Wishlist Send as E-card Share by Email
About the Book

Apta-mimamsa A Sanskrit treatise with 114 verses in ten chapters, Apta-mimamsa means ‘propounding the evident one’. It expounds the Jaina concept of 'omniscient' in a philosophical cum-logical manner. As a matter of fact, it is an eulogy. It is more popularly called Devagama-stotra after the first word in its first verse. This fashion of nomenclature was followed in the outstanding eulogies-Bhaktamara, Kalyana-mandira, Visapahara, Ekibhava etc.

The magnanimous considerations, thorough discussions, perfect solutions on the one hand, and wide coverage, aphoristic phraseology, skilful presentation and poetic flavor make this text so copious and compendious that pioneers like Akalanka, Vidyanandi and Vasunandi chose it for their voluminous commentaries, respectfully called Astasati, Astasahasri and Vrtti.

Known for his short commentaries on and translations of ancient texts into English, Sarat Chandra Ghoshal has made this text easier to grasp and additionally charming, particularly for the researchers in Indian religions and philosophy. It is a must for the entrant into the field of logic.

Academic researches in ancient Indian literature and philosophy have to depend upon Sarat Chandra Ghoshal's contribution. He was one of the few Indologists who translated the old texts into English. Well-versed in ancient Indian history, culture and archaeology, he is also known for his studies in numismatics and such other disciplines of historical value.

Apta-Mimamsa is a celebrated work written by the Digambara scholar Saint Samantabhadra. According to a tradition current amongst the Digambara Jains, this work is the opening portion of a commentary by the same author known as Gandhahasti Mahabhasya on the Tattvarthadhigamasutra by Umasvami. This commentary in full has not been discovered.

The tradition about the existence of Gandhahasti Mahabhasya is supported by references to the same in different works. Abhaya-chandra Suri (14th century A.D.) in his tika on the sutra Upajnate (Sakatayana Vyakarana, III,1-182) has refered to Mahabhasya of Samantabhadra. Mallisena-suri in his Syadvadamanjari (Saka era 1214) has mentioned Gandhahasti. Dharmabhusana in his Nyayadipika has mentioned: “It has been said by the Svami in Apta-mimamsa at the beginning of Mahabhasya”. Laghu Samantabhadra (not Svami Samantabhadra), who must have flourished later than Vikrama 12th century (because he makes mention of Vasunandi), also says that Devagama was the Manglacharana of Gandhahasti Mahabhasya of Tattvarthadhigama-sutra.

This work is also known as Devagama Stotra, because the first word of its first verse is Devagama. Samanta-bhdara in the last verse of his work says that by the preceding verse he has made Apta-mimamsa (Determination of the Trustworthy). So the name Apta-mimamsa came also to be applied to this collection of one hundred and fourteen verses.

Some commentators of Tattvarthadhigama-sutra accept that the following is the opening verse of the said work :

i.e. “I bow to him who is the guide on the path to liberation, the destroyer of mountains of karmas and the knower of the principles of the universe, so that I may attain these qualities belonging to him.”

Vidyanandi who wrote a commentary (named Asta -sahasri) on Astasati of Akalanka has accepted the fact that the verse is the opening verse of Tattvarthadhigama-sutra and that consequently Samantbhadra has discussed Apta described in the verse. Vidyanandi says: “This work named Devagama has established the Apta which is the subject-matter of praise composed at the beginning of the Sastra, i.e. Tattvartha-sutra. Vidyanandi himself later on clearly mentions: “By that Apta of the most excellent qualities praised by the sages for liberation and auspiciousness at the beginning of Nihsreyasa-sastra”.

Some have however expressed the view that abovementioned situation is no part of Tattvarthadhigama-sutra. J.L.Jaini writes “There is no sufficient reason to hold that these verses were composed by the author of Tattvartha-sutra. In the commentaries on Tattvartha-sutra such as Tattvartha-raja-vartika by Akalankadeva and Sarvarthasidhhi by Pujyapada, these Verses are not found. The last verse appears to be the Mangalacharana of Sarvarthasiddhi." J.L. Jaini also says that Tattvartha-sutra is written in the form of aphorisms and it is unusual to find a verse at the beginning of any work composed in aphorisms. This objection can be met by showing that there are works written in aphorisms beginning with a verse, for example, Pariksamukha, a work written in aphorisms by Manikyanadi, opens with a verse.

In this connection, we may mention that Acharya Jugal Kishore holds the view that from a verse in the prasasti of the drama named Vikranta-kaurava as well as the work Jinendrakalyanabhudaya, it appears that Gandhahasti-Bhasya and Devagama are two different works of Svami Samantabhadra. If Devagama-stotra be a part of the Bhasya, the names of both of these works should not have been mentioned, as the mention of only the Bhasya would have been quite sufficient. He also says that Vasunandi has written in his Vrtti on verse 114 of Apta-mimamsa that this verse shows the end of the subject. In Asta-sati and Asta-sahasri also, he says that it is found that Samantabhadra has written the work, completing the same in ten chapters.

The word Apta literally means “he who has attained or achieved”. By Apta in Apta-mimamsa, sarvajna or the omniscient is meant – (Asta-sati and Asta-sahasri). In Jainism, Kundakunda first mentioned the doctrine of omniscience and was followed in this respect by Umasvami (Tattvartha-sutra, I 10, 11, 29). Denial of omniscience is made by Kumarila Bhatta in his expositions human being cannot see all things in all places and at all times. There is a limit to human vision or knowledge beyond which these cannot proceed. Things which are beyond the senses cannot be perceived. The proofs (pratyaksa, anumana, upamana, sabda-arthapatti and abhava) cannot establish omniscience. Those who profess to be omniscients, e.g. Gautama Bhuddha in Buddhism or Tirthankaras in Jainism do not agree in their views. So omniscience is impossibility. As a result, opinion of no human being is to be regarded as infallible. Only Vedic injunctions are infallible and should be followed instead of the injunctions of Buddha or Tirthankaras. By performance of sacrifices as prescribed in the Vedas, a potential after-state is created which brings all desired fruits (Sloka-vartika, Verse 111 and those following the same).

Kundakunda demonstrated that the help of senses is not required in omniscience. Omniscience is not magnified sense-perception. It is direct experiential knowledge. Atma and knowledge are co-extensive and co-existent (Pravachanasara, I, 23). The soul (Atma) knows itself, other objects than itself, as well as those which result from the combination of soul and matter, physical and karmic (Ibid, I, 36). Owing to knowledge-obscuring karmas, the ability of soul to have knowledge is obscured. When all the four obscuring and obstructive karmas are destroyed, the soul becomes possessed of omniscience (Ibid, I, 15-16). This knowledge is gained without the aid of senseorgans. It is atindriya-jnana, also known as ksayika-jnana, because it arises after the nitanta ksaya (total destruction) of obscuring and obstructive karmas. The Kevalins, Tirthankaras and Siddhas have this omniscience.

Akalanka in his commentary on Apta-mimamsa (entitled Astasati) and Vidyanandi in his Astasahasri refute the arguments of Buddhists and Kumarila.

The view of Lewis Rice, as set forth in his Introduction to Inscriptions at Sravanabelagola that "Samantabhadra flourished in the first or second century A.D.", that of Edward P. Rice in his History of Canarese Literature (following the Canarese work Karnataka-Kavi- Charita by R.S. Narsinhacharya and the Hindi work Karnatak Jaina Kavi by Nathuram Premi) that "Samantabhadra is by Jaina tradition placed in the second century", that of M.S. Ayangar in his Studies on South Indian Jainism that "Samantabhadra was the first of a series of celebrated Digambara writers who acquired considerable prominence in the early Rashtrakuta period", and that of Dr. S.c. Vidyabhushana in his History of the Medieval School of Indian Logic that "Samantabhadra is supposed to have flourished about 600 A.D." have been very ably criticised by Pandit Jugal Kishore. The curious reader may look up the detailed criticism in Pandit Jugal Kishore's Introduction already mentioned.

Kundakunda flourished before Umasvami. The different views about the approximate date of the latter have already been mentioned. Kundakunda's date was before this. A.N. Upadhye has in his Introduction to Pravachanasara has after a very careful discussion on all points, come to the conclusion that "Kundakunda's age lies at the beginning of the Christian era."

The style of writing and the language employed also support the view that the order of sequence was-(l) Kundakunda, (2) Umasvami and (3) Samantabhadra. Kundakunda wrote in Prakrit verses. Earlier works on Jainism were all in Prakrit. The use of Sanskrit language came in later. The form of Sutra was first employed in Sanskrit works and Umasvami's work (Tattvarthadhigama-sutra) was in the form of aphorisms. Samantabhadra began to write in Sanskrit verses. This use of Sanskrit verse was made by all later writers, though some exception is found in works like Pramana-mimamsa by Hemchandra and Pariksamukha by Manikyanandi.

As to the life of Samantabhadra, very little is known. Pandit Jugal Kishore from a line 1 in a manuscript copy of Apta-mimamsa found in the library of Daurbali Jinadas Shastri of Sravnabelagola has concluded that Samantabhadra was the son of a ruler of Uragapur and from the colophon of Stutividya or Jina-stuti-satam or Jina-sataka or Jina- satakalankara (these are different names of the same work), has mentioned that Santivarma was the name of Samantabhadra before he become a saint. In my opinion, subject to correction by any later discovery of trustworthy materials, the line in the manuscript written by an unknown person at an unknown time is no authority for holding that Samantabhadra was the son of a ruler or Uragapur. I am also of opinion that from the nature of writings of Samantabhadra, it is very unlikely that he should be the author of a treatise of Alankara, devoting himself to highly artificial poetry. That Narsimha, a commentator of this work or Ajitasena in his Alankarachintamani has mentioned Samantabhadra to be its author, might be due to following a tradition. Such is the case of poet Kalidasa being considered the author of Nalodaya, a highly artificial poem. From comparing the language and the method of writing, it has been established that this Nalodaya cannot be the work of the celebrated poet Kalidasa, the author of Abhijnana-sakuntalam, Raghuvamsam, Meghdutam etc. Pandit Jugal Kishore has himself expressed doubt regarding a line4 referred to by Pandit Banshidhar but which could not, on a reference to him, be substantiated as' coming from any authentic source. So it is not justifiable even to discuss the possibility of Santivarma being king Santivarma of Kadamba dynasty. 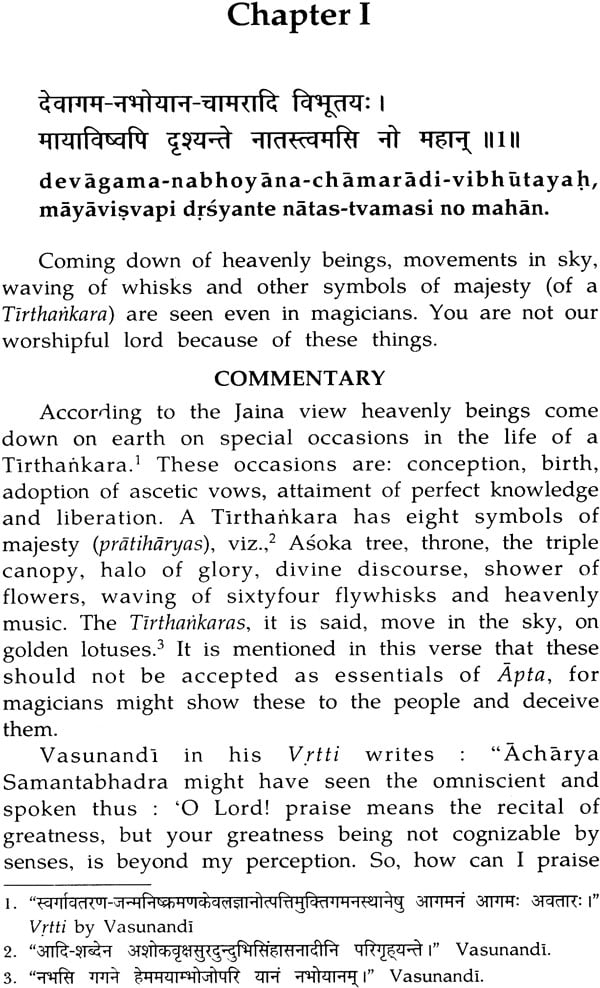 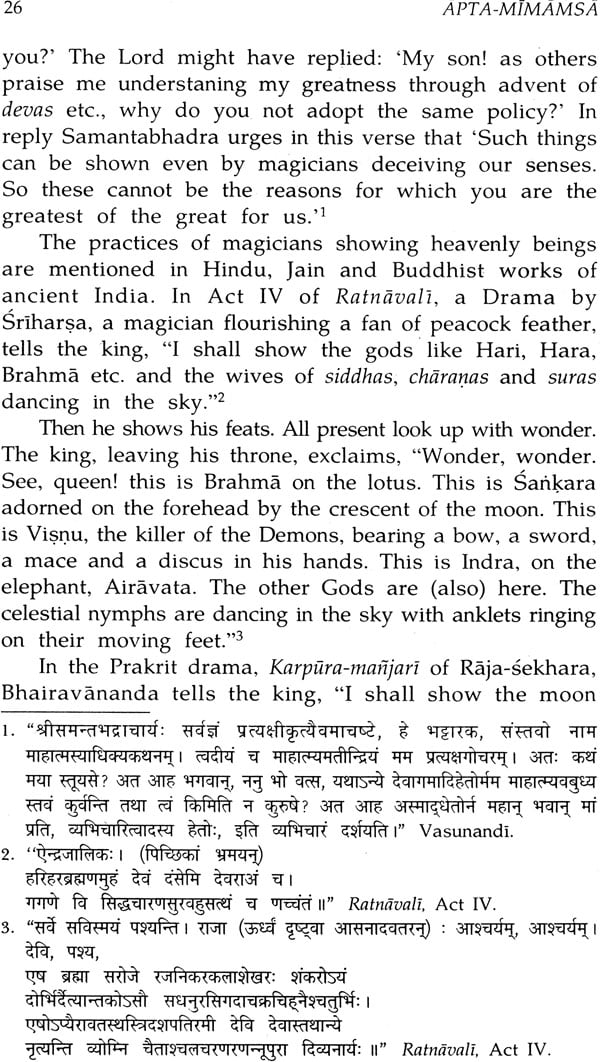 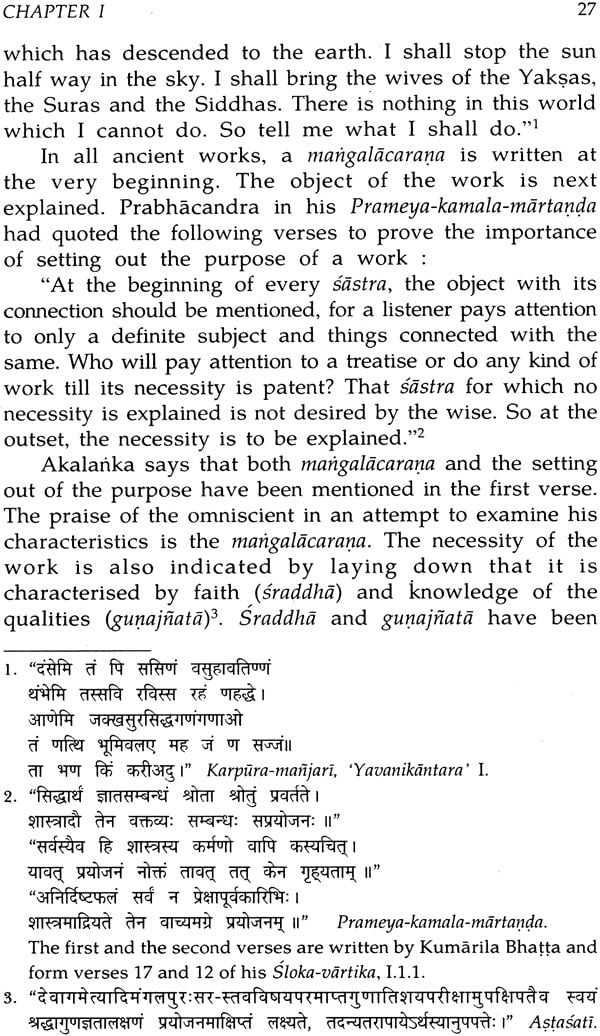 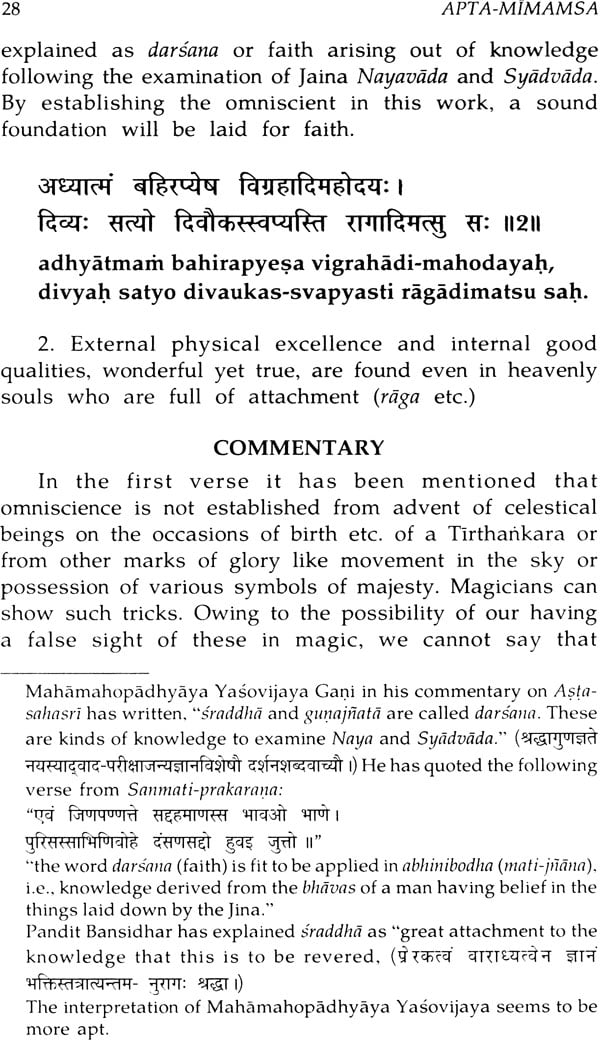 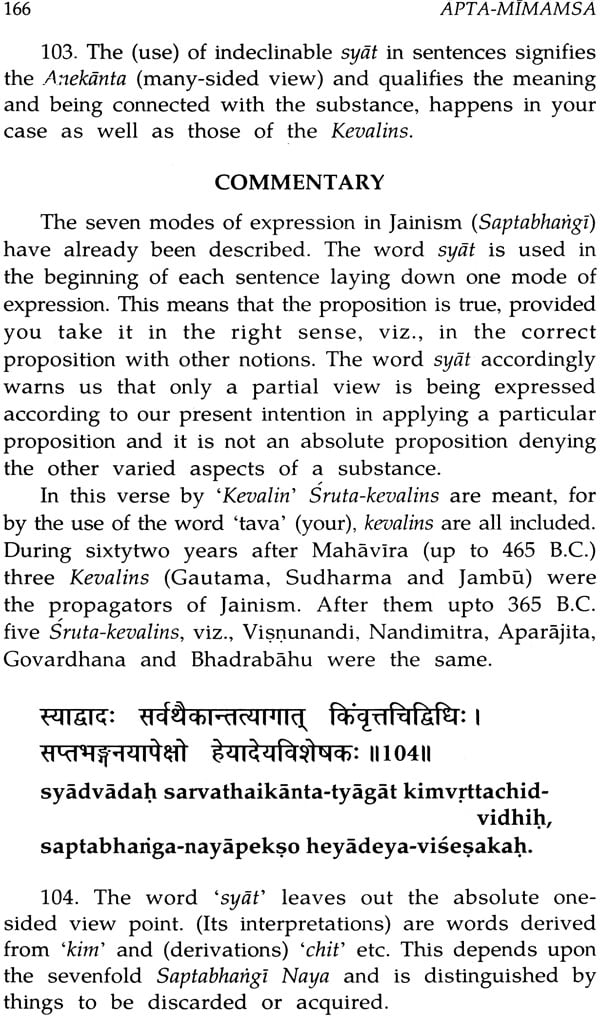 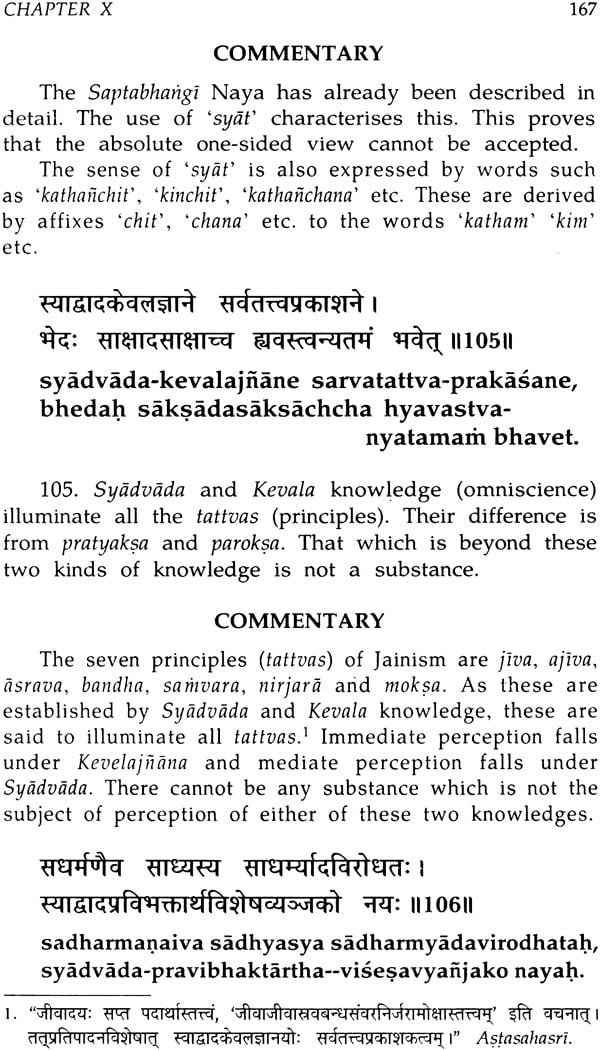 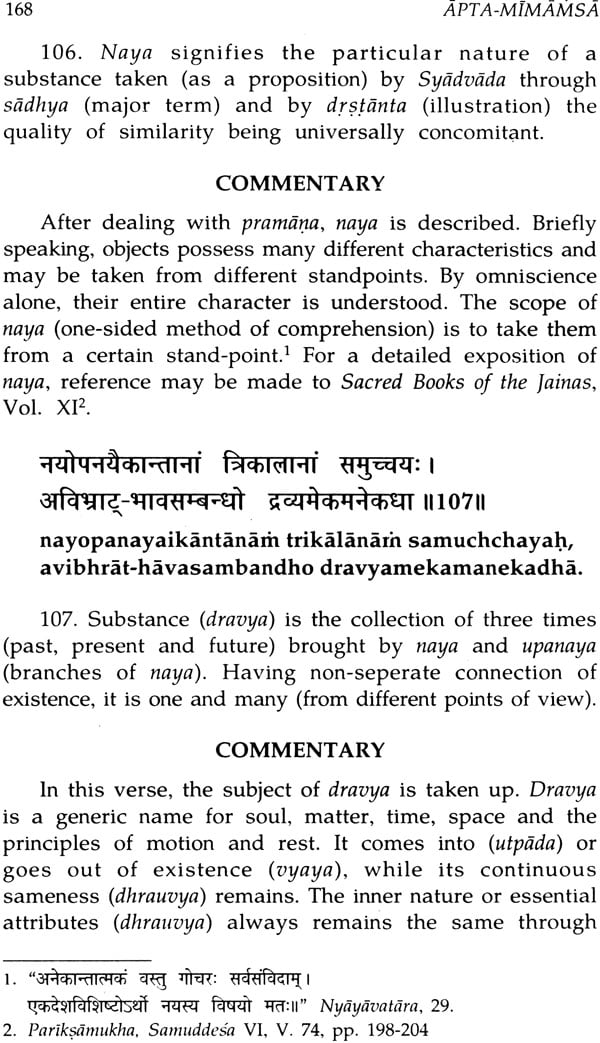 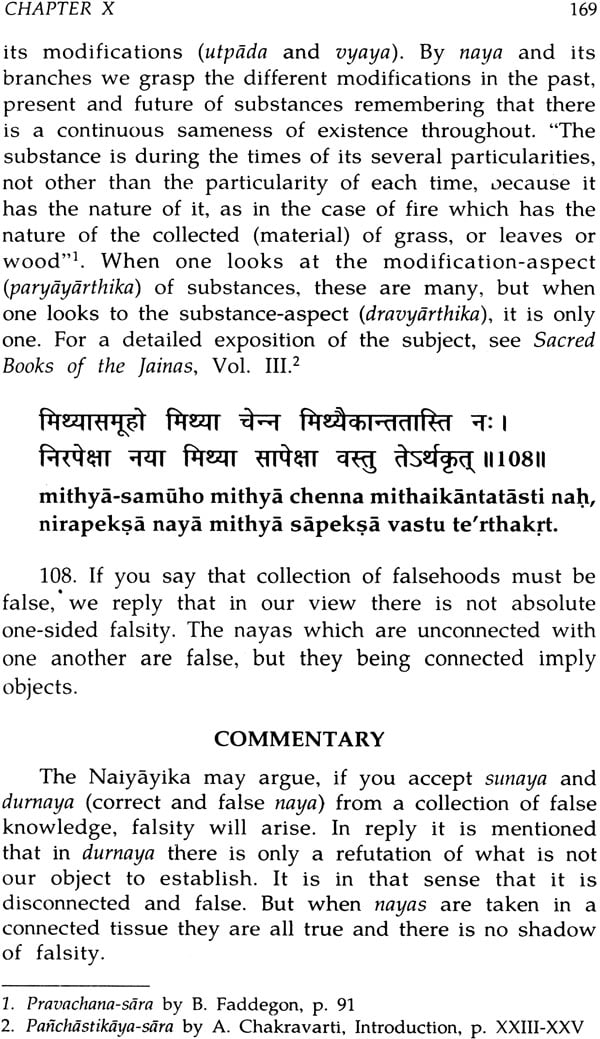