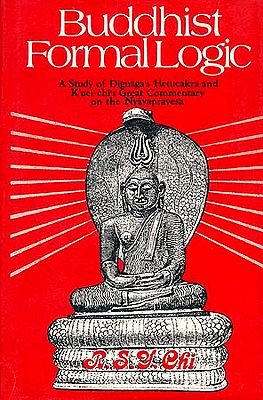 This work is primarily an interpretation of India logic preserved in China. The material is mainly taken from K'uei Chi's Great Commentary on the Nyayapravesa. It is not designed to be a comprehensive study of Indian logic in general, nor is it planned to be a complete exposition of K'uei Chi's work in particular. Its scope is confined to formal logic. The author's intentions are to solve problems which have not yet been settled and to interpret theories which have not yet been clearly interpreted, instead of duplicating what other people have already done. Much more attention has been paid to the fundamental principles and less to the list of fallacies, in particular less to the overelaboration which does not make much sense either theoretically or practically.

In an examination of the principles of the Hetucakra and the Trairupya, it is unavoidable that some non-Buddhist works are involved, i.e. without them the discussion of the theories would be incomplete. Therefore the theories of Uddyotakara, who was totally unknown to the early Chinese logicians, have been discussed. Besides interpetaiton of Indian theories, one chapter is devoted to a discussion of possible consequences on Western logic after Indian theories have been introduced and absorbed.

Regarding symbolic notation, the author generally follows that of the Principia Mathematica. One of the exceptions is the use of dots. A part of Aristotelian terminology, such as the names of premises, terms and moods, has been used as a substitute, and not the precise equivalent, for the sake of convenience only.