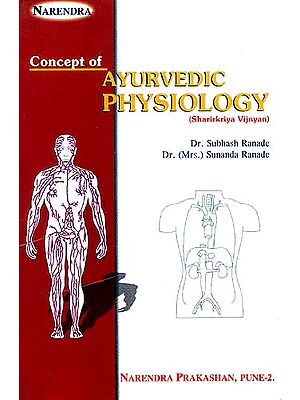 $16.50
Notify me when this item is available
Save to Wishlist Send as E-card Share by Email
PREFACE

We are happy to present this book 'concept of Physiology-Sharirakriya'-to the readers.

We are giving lectures on Ayurveda since 1981 at various Institutes in Germany, Swiss, Italy, France, Poland, Spain, Japan and at various colleges of Ayurveda in the United states.

Initially these courses were of introductory in nature. During this period, we had published books like ' Fundamental Principles of Ayurveda', 'Natural Healing Through Ayurveda.' These books were sufficient for giving the basic knowledge of Ayurveda. Now complete ayurvedic courses are being conducted at various Institutes throughout the World. Ayurveda is becoming popular and students are naturally demanding more and more books for various subjects for deeper study of Ayurveda.

We therefore felt it necessary to write this book explaining all the topics on Physiology or Sharira Kriya for the students as well for enthusiastic readers. In this book we have covered all the topics starting form the Introduction. Fundamental Principles to the description of dosha, Dhatu and mala as well as detail description of srotas - channel systems.

We have given detail description regarding digestion and metabolism as well as various aspects in comparison with science of Yoga and important topics like oja and mind.

More than 20 years ago, I have published a book on the same subject in Marathi and Hindi language and these books are standard reference books for this subject. While writing this book we have taken into consideration foreign students and have tried to explain all the subject so that it will be easy for them to understand the same.

We are therefore sure that students will be happy to get the information on all the topics and would welcome this book also.

Dr. Subhash Ranade is one of the foremost experts on Ayurveda.

He is leading academician and physician in the field of Ayurveda. He is the author of more than 70 books on Ayurveda and Yoga. He has worked as prof. And Head, Dept. of Ayurveda. Pune University and Principle of Ashtang Ayurveda College, Pune, India. He is also Chairman, International academy of Ayurveda, Pune, India. This Institute imparts Ayurveda courses, Panchakarma and rejuvenative treatment for foreigners and Indians in Pune and Goa

Professor Subhash Ranade has given many television interviews on Ayurveda, not only in India but also in Poland, Italy and Germany as well. He has also attended many International and National seminars on Ayurveda and Yoga. He has written hundreds of articles on Ayurveda and Yoga in various magazines and newspapers.

He has honor of being visiting Professor to many institutes in the United states like aye-Seattle, American Institute of Ayurveda, San Francisco; SEVA academy Munich and Veda Klinik Charlottenhohe, Germany; Ateneo Veda Vyasa, Savona and SKA Ayurveda, Milan, Italy; School of Ayurvedic Culture, Barcelona, Spain; Body-mind health, Zurich, Swiss; Ultimate Health Center, Athens, Greece; and Foundation for health in Warszawa, Poland. His pioneering work in the field of CD ROM's like Dhanvantari and Massage have been whole-heartedly welcomed and highly appreciated by the Ayurveda world. Since 1981, he has visited and conducted hundreds of Ayurveda courses for medical practitioners in Europe, Canada, USA and Japan.

Dr. Sunanda Ranade is expert ayurvedic gynecologist and nutritionist. She is Director of International academy of Ayurveda, Pune, India and is working in the field of Ayurveda and Yoga since last 35 years. Dr. Sunanda Ranade has written hundreds of articles on Ayurveda, which have ben published not in Indian magazines and newspapers but also in Italy and Germany. She is also the author of several books on Ayurveda, which have been published in Marathi, English and Italian languages.

She has conducted many courses on Gynecology, nutrition and ayurvedic massage for physicians and common people in these countries.

She has also substantially contributed for CD ROM -Dhanvantari that is the first CD on Ayurveda.