Congress And The Raj (Facets of the Indian Struggle 1917-47) 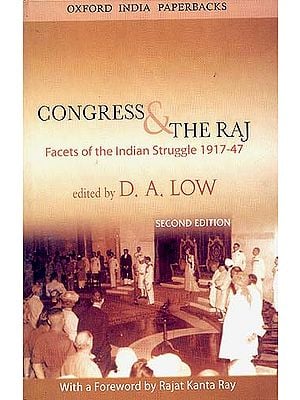 $32.00
Notify me when this item is available
Save to Wishlist Send as E-card Share by Email
About the Book

This volume studies the less-eulogized facets of the anti-imperialist movement. D.A. Low, the editor of this volume, was the founder of the Canberra-Sussex school that initiated the transition from elite to popular historiography. The Foreword narrates an interesting anecdotal history of the historiography of Congress and the Raj and the resultant intellectual debate that raged at the time.

This classic study of the national movement and popular politics in modern India focuses on the less know facets of the struggle at the village, region and provincial levels. In his introduction, Low highlights the transition from elite to popular historiography by dwelling on the ability of the Congress to win over peasant communities which ironically the British had enfranchised. A Foreword by historian Rajat Kanta Ray both situates the


work and provides a current context.

This valuable collection will be useful to those interested in the history of nationalism and imperialism as well as the origins of post-Independence politics in India. It will also appeal to scholars and students of history,

politics, and the lay reader

D.A. Low is Emeritus Smuts Professor of the History of the British Commonwealth in the University of Cambridge. He was formerly Vice-Chancellor of Australian National University, Director of the ANU's Research School of Pacific Studies, and founding Dean of the School of

African and Asian Studies at the University of Sussex.

'This volume showed the strengths of local research and the importance

of the worm's eye-view
-Hindu

'The book is a valuable addition to the historiography of modern India.'

'The articles Yield a mine of information to new research workers.'

'Congress and the Raj brings the work of a number of scholars to bear on the three decades during which the British government faced an overt and sustained challenge to the legitimacy of its very presence in India.'