The Curse of Talakad: (Re)situating and (Re)contextualizing a Legend in History 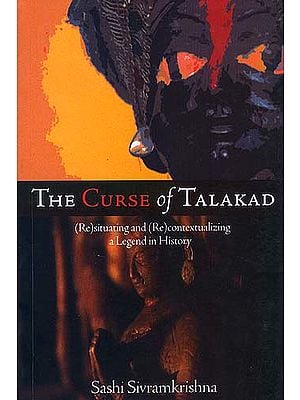 $16.50
Notify me when this item is available
Save to Wishlist Send as E-card Share by Email
From the Back of the Book :

According to legend, the 'Curse of Talakad' was uttered four hundred years ago, by the wife of a defeated Viceroy of the Vijayanagar Empire on Raja Wodeyar of Mysore. People believe that the curse is true...and continues to hold true till this day.

Looking at the evidence at Talakad, Malingi and the Wodeyar genealogy, one is tempted to believe the curse: the ancient city of Talakad is completely buried under sand hills...Malingi is situated dangerously close to the churning waters of the Cauvery river...and Wodeyar genealogy has shown a strange pattern over the last four centuries.

The curse of Talakad is no ordinary legend - it ties two natural events with a genealogical part that has predicted a sequence of future events...right to this day!

The book puts together all evidence - archaeological, geological and historical about the events at Talakad and Malingi, as well as the historical facts about the Wodeyar genealogy. Some startling historical information from archival records and old travelogues have led to clues that 'solve' the mystery of the Curse of Talakad...almost.

Sashi Sivramkrishna has done his doctorate in Economics from cornell University and his present activities include running his own business, research and teaching Economics, documentary filmmaking and writing.