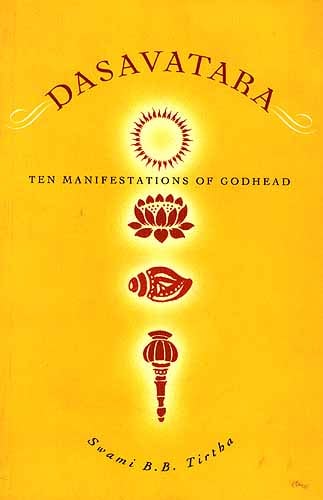 The Lord is the rescuer of the fallen and descends into the material world out of his infinite compassion, to emancipate the conditioned souls. The Lord has infinite manifestations in which he reveals Himself. In the eternal abode, the Lord's associates serve him in different relationship. Therefore, he manifests in various forms, so as to facilitate the soul's desire to serve Him in a form suitable to their taste. This way they can free themselves from their material condition and become eligible for supreme bliss by attaining love of Godhead.

The lyrical poems Gita-govinda and Dasavatara-stotra are both written by Sri Jayadeva Gosvami. Since hundreds of years they are sung daily before the Deity of Lord jagannatha in the famous pilgrimage town of Puri, India. Jayadeva Gosvami's Dasavatara Strotra is respected everywhere in India. The ten Divine Desends of God Occupy a special position in the Vedic Cosmology. In order to remember the appearance and pastimes of these ten avataras, a short biography of them has been provided in this book. Unalloyed devotees, under the shelter of the great devotee Sri Jayadeva Gosvami, offer their prayers to the tem avataras of Lord Krishna, remembering their pastimes and praying for their Grace

Srila Bhakti Ballabh Tittha Gosvami Maharaja was born in 1924 in Assam, India. After completing his Masters in Philosophy at Calcutta University in 1947, he came in contact with his spiritual master, Sri Srimad Bhakti Dayita Madhava Gosvami Maharaja. He was then initiated into the Gaudiya Vaisnava School of Bhakti yoga propagated by Sri Caitanya, the 15th century master of devotional ecstasy and has been a monastic since.

After the disappearance of his spiritual master in 1979, he was appointed as the President-Acarya of Saree Chaitanya Gaudiya Math, which has over 20 ashrams in India alone. From 1997, Srila B.B. Tirtha Gosvami Maharaja has visited a variety of foreign countries, enlivening all who come in contact with his sweet personality and message of divine love.