The ideals and values that Pandit Deendayal Upadhaya propaged and practiced, which led to the growth of the Bhartiya Jana Sangh, and later to the birth of the BJP, have been well laid out in this book.

Believing in the ideology of the RSS. Pandit Upadhyaya dedicated his life to serve the nation through Sangh work. This book not only traces his journey as one of the primary leaders who instilled the sense of nationality in the country. But also as one who condemned exploitation by the state.

While much has been discussed and written on Pandit Deendayal Upadhaya, it is not easily accessible to all. This is an attempt to make his contribution accessible to general readers for a better understanding and fresh assessment of a leader about whom not much is known except in party circles.

Dr Shiv Shakti Nath Bakshi, a PhD in History from JNU, is currently the National Convenor of BJP Journals and Publication Department and also Executive Editor of Kamal Sandesh. He edits party publications, presents papers in India and abroad, writes regualarly in many national dailies and is seen in panel discussions on various national TV channels.

Pandit Deendayal Upadhaya, as an ideologue, organizer and political leader, left his indeilible imprint on the canvas of Indian politics. As an organizer he laid the foundation of a political party which later emerged as an alternative to Indian National Congress: as an ideological he imbued the political horizon with the originity of his ideas: and as a political leader he pursued the idea of principaled politics in the country. He propounded the philosophy of 'Integral Humanism', and also tried to present an ideal picture of a political activist, the 'Karyakrata', through his conduct in public life. His intellectual capabilities, ideological commitment and political ideology and heralding the era of coalition government in pursuance of creating an alternative to Congress and its politics.

Upadhaya's life was full of challenges and difficulties. Both his parents died while he was still a child and his sibling left him at a very tender age. He also had to discontinue his studies due to adverse conditions at home. He came in contact with Rashtriya Swayamsevak Sangh (RSS) in 1937 in Kanpur while pursuing his graduation. It was a turning point in his life. He embraced the life of a 'pracharak' and became a full-time worker of RSS.

It has been attemped to decipher the journey from Bhartiya Jana Sangh to Bhartiya Janta Party and the impact of his ideas on the overall political culture and ideolodical and political evolution of the party. The book tries to analyze his political and ideological aspects and development models of BJP. The goverence and development models of BJP have been tried to be viewed in the contours of his ideals, writings and speeches. The book attempts to contextualize his vision, ideas, politics and the manner in which he sought to build Bhartiya Jana Sangh while seeking to create a niche for it in the non –Congress political space in India. It mainly discusses the historical circumstances in which the party was born and Pandit Deendayal Upadhyaya's role in making it a political forces withing a very short span of time. The book is written with an eye on the general readers who are eager to know more about him and the historical circumstances that led to the creation of Jana Sangh and its transition to BJP. 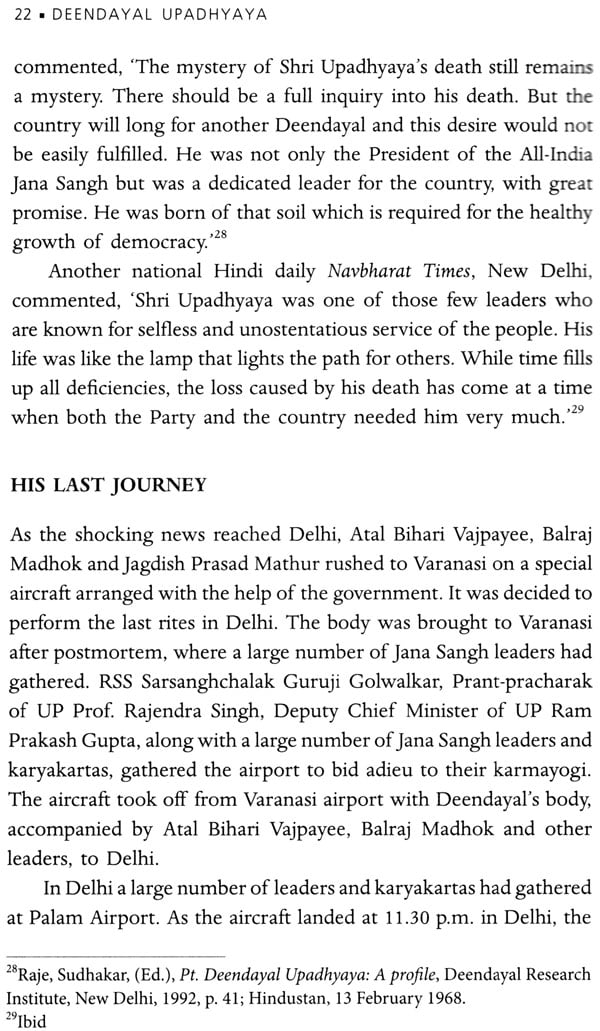 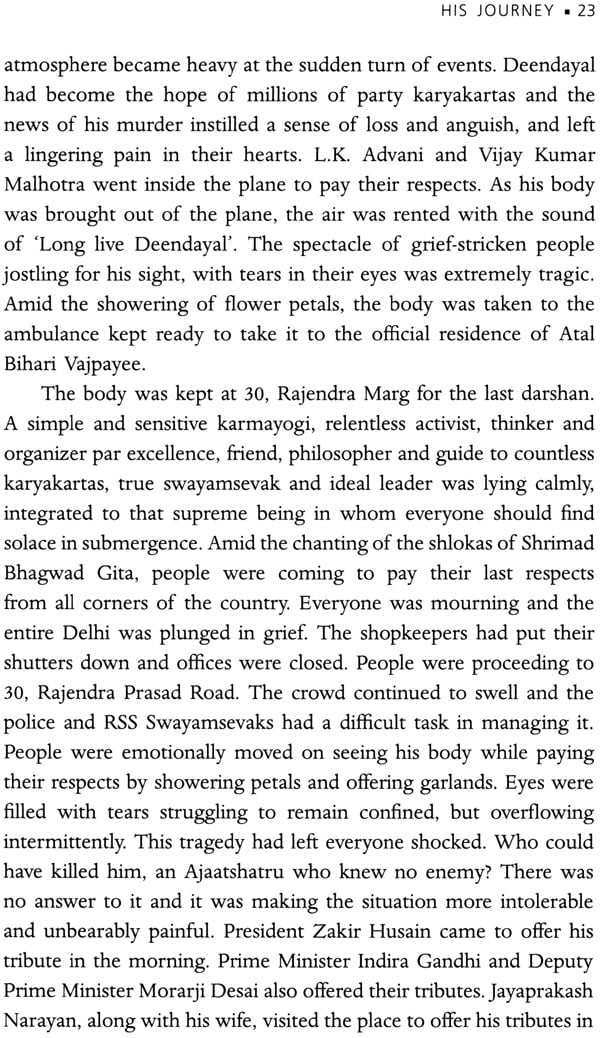 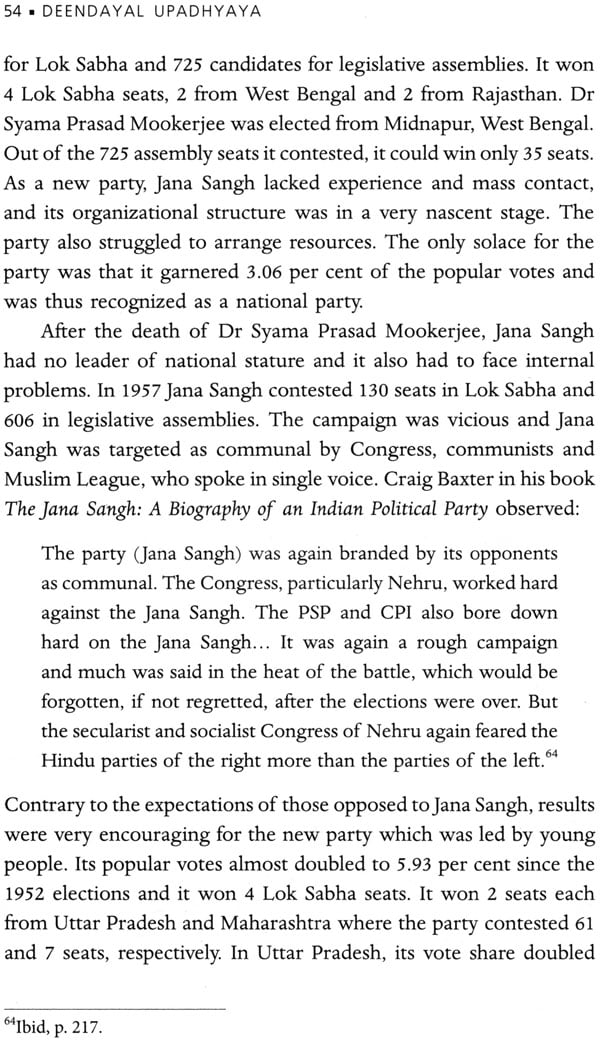 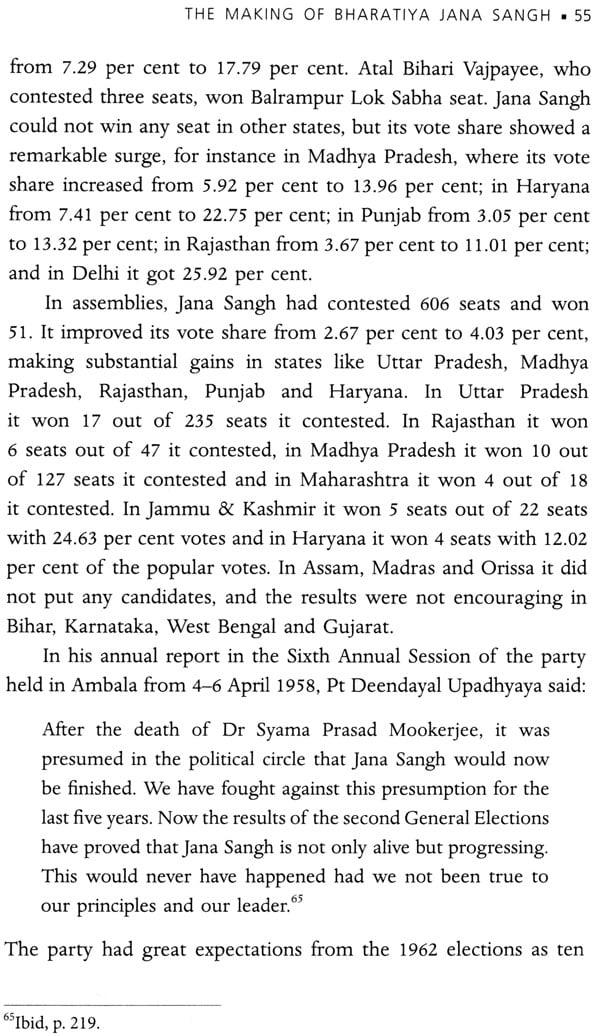 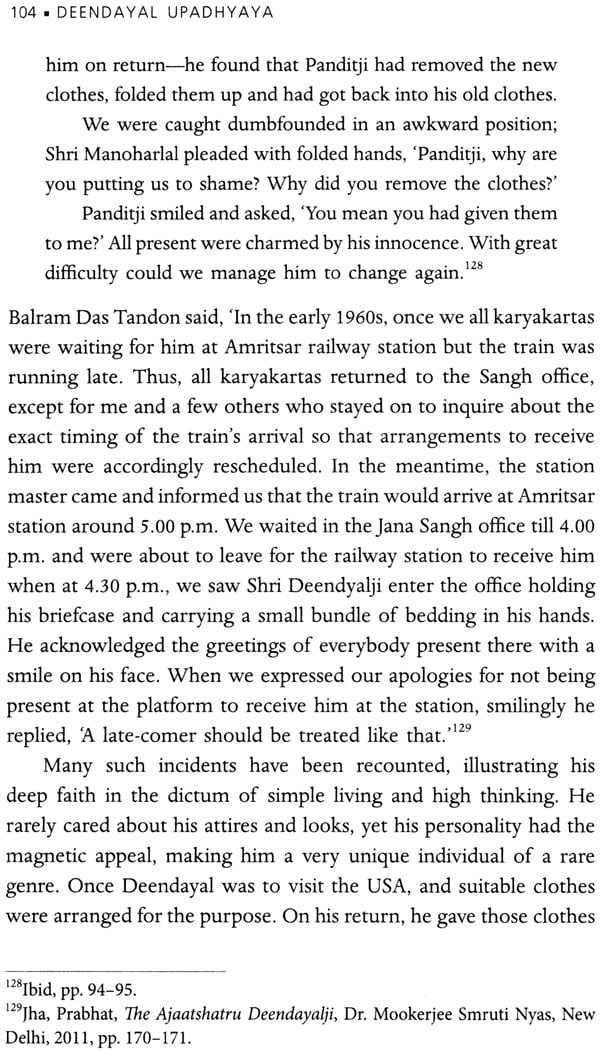 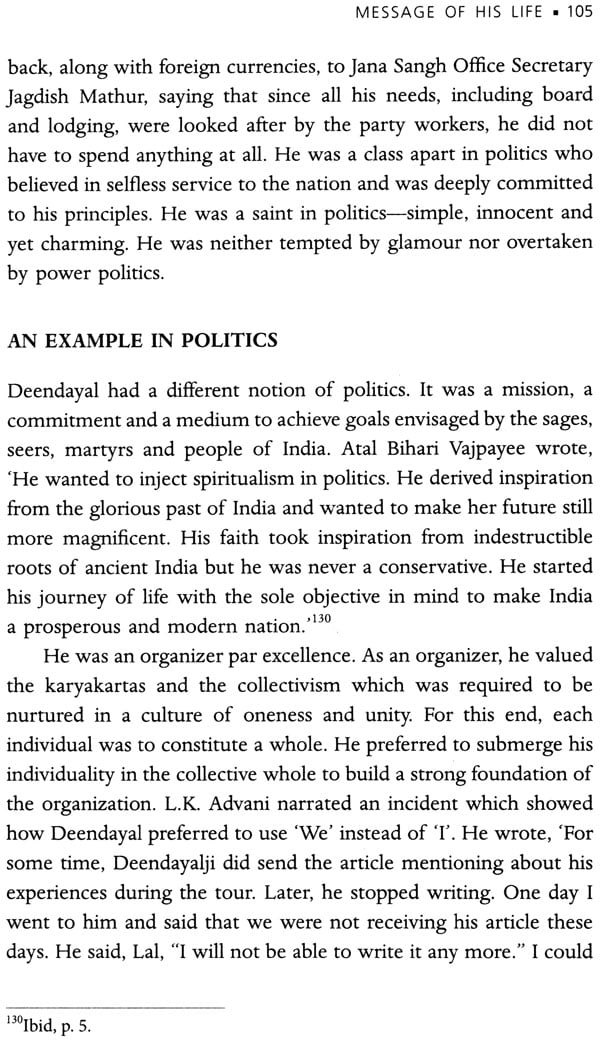