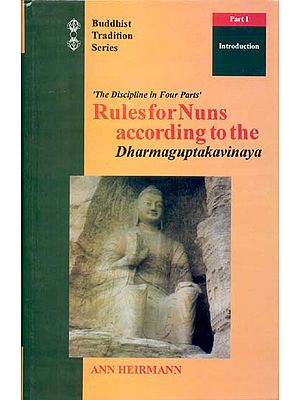 $125.00
Notify me when this item is available
Save to Wishlist Send as E-card Share by Email
About the Book:

The present work provides the first complete annotation translation into English of the Chinese version of the bhiksunivibhanga of the Dharmaguptakavinaya. This vinaya laid the foundation of Chinese monastic life. As the Dharmaguptakavinaya came into being in symbiosis with other vinaya traditions, a comparison is made with these other traditions on important issues.

In the introduction, the place of the Dharmaguptaka tradition, the career of a Buddhist nun and the rules of discipline are discussed. The notes to the English translation provide relevant references to technical terms and to parallel passages from the discipline for monks as well as from other vinaya traditions.

The work is supplemented with indexes, glossaries and a concordance of the rules for nuns and monks of the Dharmaguptaka tradition.

Graduation from the 'Universiteit Get' (Ghent University, Belgium) in 1994, Ann Heirman (b.1965) has been working at the same university since 1995, first as research assistant with the National Fund for Scientific Research (Belgium), at present as assistant professor in the department of Chinese Language and Culture.