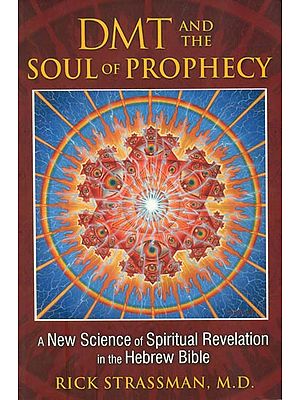 After completing his groundbreaking research chronicled in DMT: The Spirit Molecule, Rick Strassman was left with one fundamental question: What does it mean that DMT, a simple chemical naturally found in all of our bodies, instantaneously opens us to an interactive spirit world that feels more real than our own world?

When his decades of clinical psychiatric research and Buddhist practice were unable to provide answers to this question, Strassman began searching for a more resonant spiritual model. He found that the visions of the Hebrew prophets-such as Ezekiel, Moses, Adam, and Daniel were strikingly similar to those of the volunteers in his DMT studies. Carefully examining the concept of prophecy in the Hebrew Bible, he characterizes a prophetic state of consciousness" and explains how it may share biological and metaphysical mechanisms with the DMT experience.

Examining medieval commentaries on the Hebrew Bible, Strassman reveals how Jewish metaphysics provides a top-down model for both the prophetic and DMT states, a model he calls "theoneurology." Theoneurology bridges biology and spirituality by proposing that the Divine communicates with us using the brain, and DMT-whether naturally produced or ingested-is a critical factor in such visionary experience. This modelprovides a counterpoint to neurotheology," which proposes that altered brain function simply generates the impression of a Divine-human encounter.

Theoneurology addresses issues critical to the full flowering of the psychedelic drug experience. Perhaps even more important, it points the way to a renewal of classical prophetic consciousness-the soul of Hebrew Bible prophecy as well as unexpected directions for the evolution of contemporary spiritual practice.

In mid-sixth-century BCE* Babylonia.! the Hebrew prophet Ezekiel experienced a vision that came upon him while he stood by the river's shore. Ezekiel was among the exiles from Judea, the Southern Kingdom of ancient Israel. He and his comrades were beginning a seventy-year sojourn in their conquerors' homeland after their armies destroyed the First (or Solomon's) Temple and the rest of Jerusalem in 597 BCE. We know nothing about Ezekiel before his prophetic mission, a mission he carried out with relentless passion. He both raged against his people for their role in Jerusalem's downfall as well as offered hope for a future redemption. The Book of Ezekiel begins with this vision:

A Stormy wind was coming from the north, a great cloud with flashing fire and brilliance surrounding it…and from its midst a semblance of four Chayot. * ... And as for the appearance of the Chayot, their appearance was like fiery coals, burning like the appearance of torches. . . . There was a brilliance to the fire, and from the fire went forth lightning. . . . Then I heard the sound of their wings like the sound of great waters ... the sound of the words like the sound of a company .... I fell upon my face and I heard a voice speaking, . . . "Son of man, stand on your feet and I will speak to you." (Ezek. 1:1-2:1)

Nearly 2,500 years later and halfway around the world, I injected Leo," a human research volunteer, with the powerful psychedelic drug dimethyltryptamine, or DMT. The setting was the General Clinical Research Center of the University of New Mexico Hospital in Albuquerque in what was the first new American human research with psychedelic drugs in a generation. I have previously written about this study in DMT: The Spirit Molecule: Hundreds of plants produce DMT. So does the human body. Thus it is an endogenous psychedelic substance, one that the body makes on its own. My long-standing interest in the biology of spiritual experience had finally culminated in this project studying the effects of DMT, effects I speculated might resemble naturally occurring spiritual states of consciousness.

Leo was a psychologist in his mid-thirties and reported the following to us after the drug effects had worn off: Large crystalline prisms appeared, a wild display of lights shooting off into all directions .... My body felt cool and light. Was I about to faint? ... My mind was completely full of some sort of sound, like the aftereffects of a large ringing bell. . . . Out of the raging colossal waterfall of flaming color expanding into my visual field, the roaring silence, and an unspeakable joy, they stepped, or rather, emerged. Welcoming, curious, they almost sang, . .. "Now do you see? Now do you see?" (DMT, 344)*

The similarities between the two men's descriptions are striking: a "rush" of wind or physical lightness, a mind-filling auditory experience, feelings so powerful as to cause a falling down or near faint, and the appearance of creatures emerging out of an amorphous, intensely dynamic background of preternaturally bright, flashing, and flaming colors. Both sets of beings' spoken voices also possess a noteworthy authority and power.

How are we to understand these impressive similarities? What do they mean? What are their implications, both theoretical and practical? Do Ezekiel's and Leo's visions consist of the same "stuff"? If so, what is it? And if not, how do they differ? And most important, what do their visions mean? What can we learn about ourselves and about the natural, social, and spiritual worlds from their experiences? In formulating a set of answers to these and many other related questions in DMT and the Soul of Prophecy, I will present a new scientific model for spiritual experience that bridges the Hebrew Bible and contemporary psychiatry. This model is theoneurology, and it uses for a bridge a modern reinterpretation of medieval Jewish metaphysics. A remarkable collection of medieval authors used this metaphysical system to explain Hebrew Bible prophecy-the paradigmatic spiritual experience of their time-taking into account both the science and theology of their day. It is a model that explains how God affects the world through the natural laws of science. As interest in the biology of spirituality continues to grow and new research findings in the field emerge, reexamining the medieval Jewish philosophers' approach to spirituality seems especially timely because of its synthesis of scientific and Western religious sensibilities.

Theoneurology provides a counterpoint to the present research model of neurotbeology, which proposes that the brain generates spiritual experience.' In contrast, the theoneurological approach asserts instead that the brain is the agent through which God communicates with humans. This new model incorporates the findings of contemporary brain science while providing a more expansive understanding of the organizing principles for which those objective data provide evidence. Integrating theological notions into a biomedical model of spiritual experience also may provide meaning for such experiences beyond their solely adaptive biological or social consequences. The striking similarities that I will demonstrate between the prophetic and DMT states suggest common underlying mechanisms, both biological and metaphysical. As these shared features and theoretical mechanisms become clearer, I begin to build a case for a contemporary renaissance of prophetic experience. This project proposes combining the enduring teachings of the Hebrew Bible with the powerful consciousness-altering effects of the psychedelic drugs. 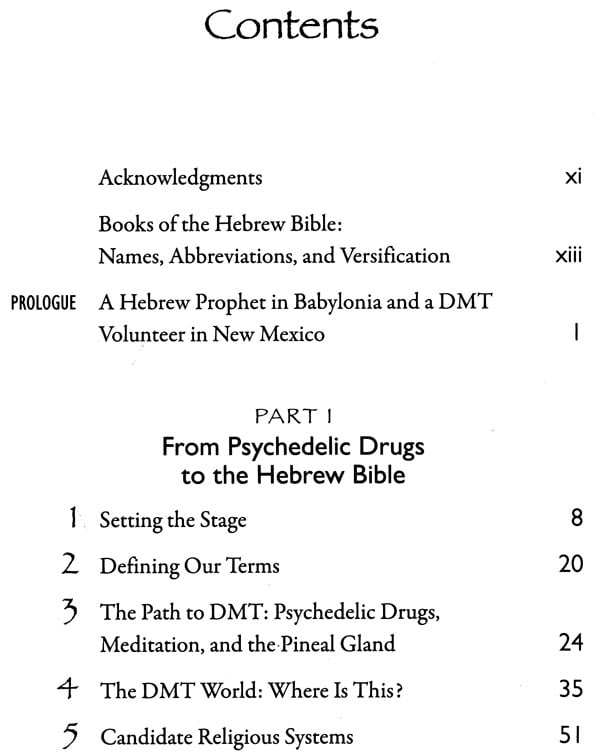 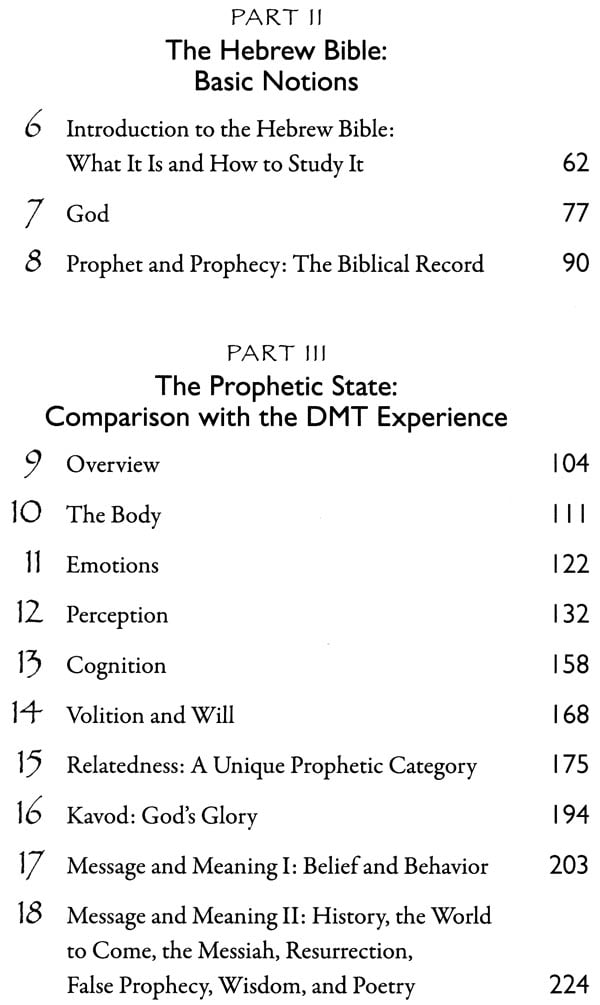 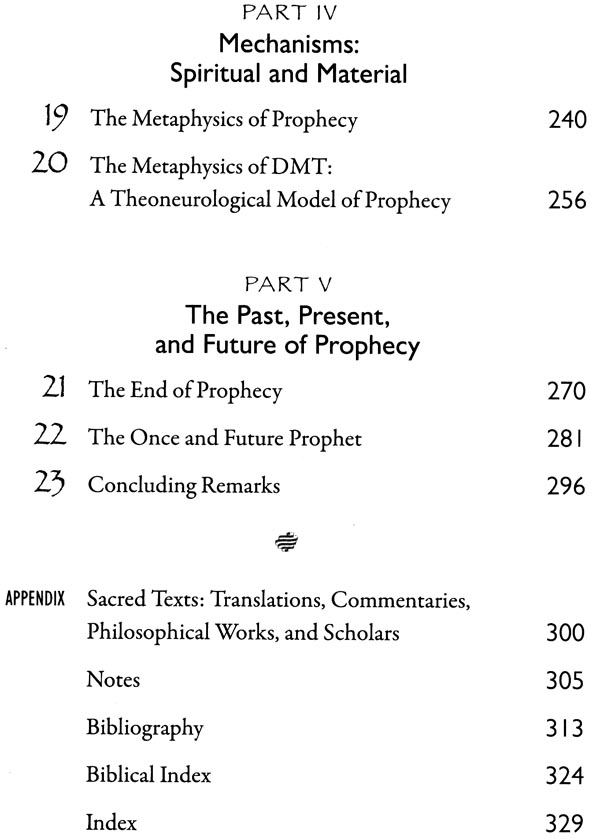 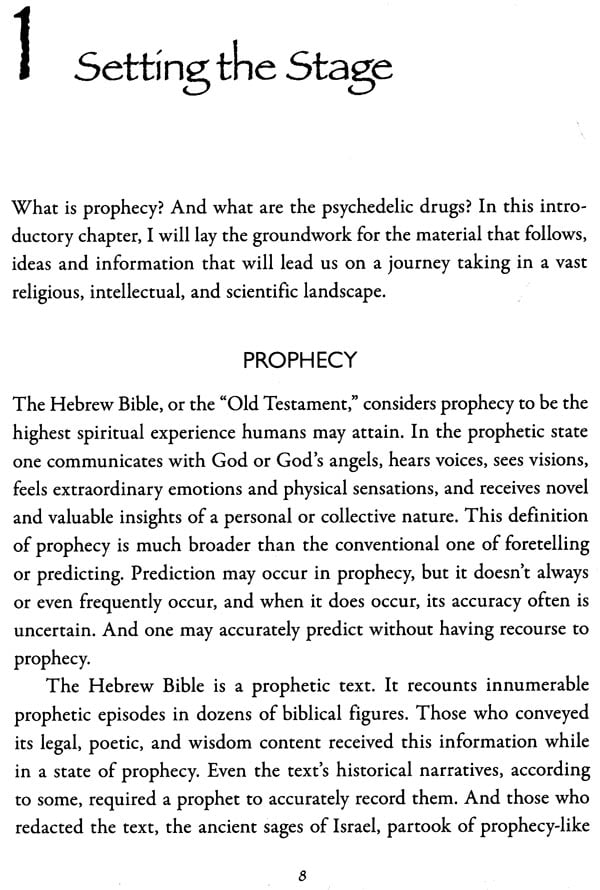 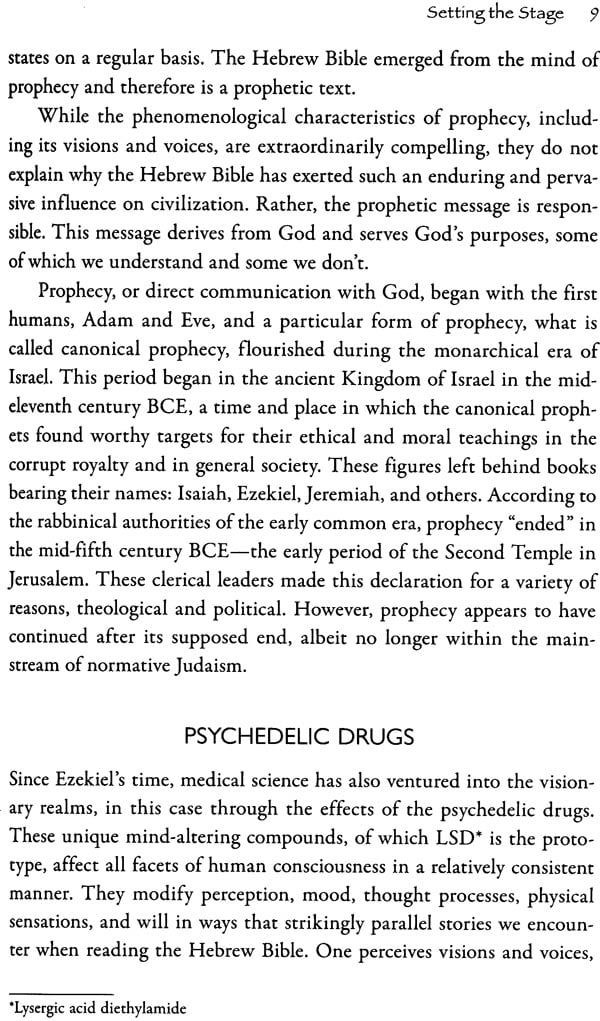 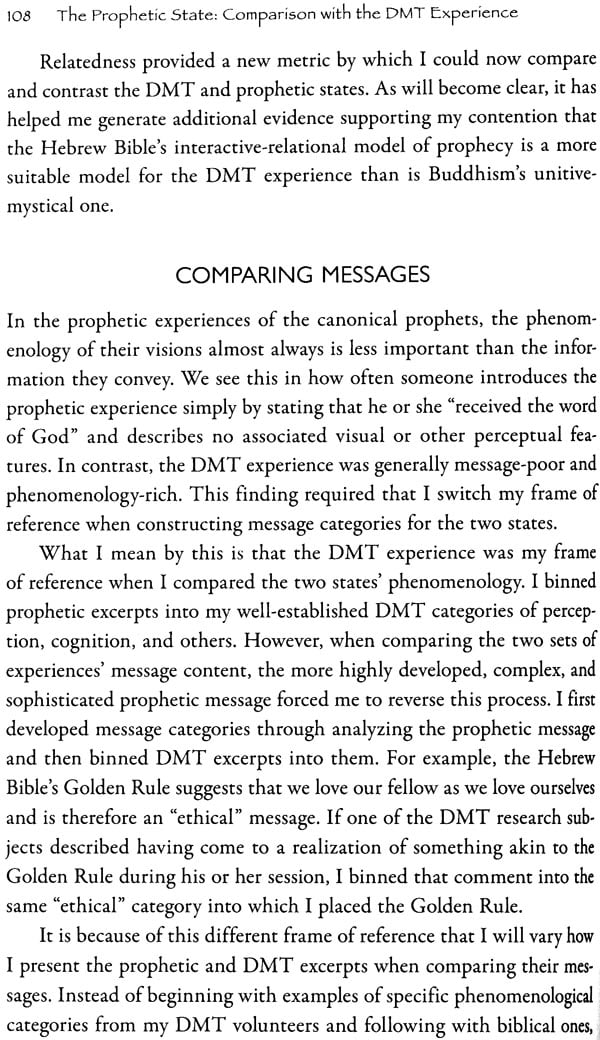 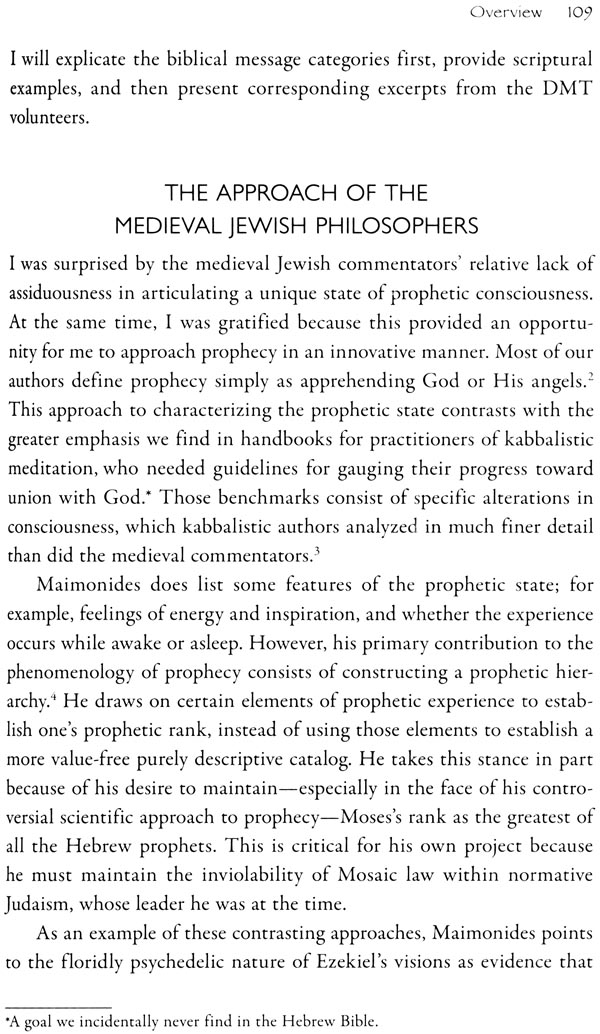 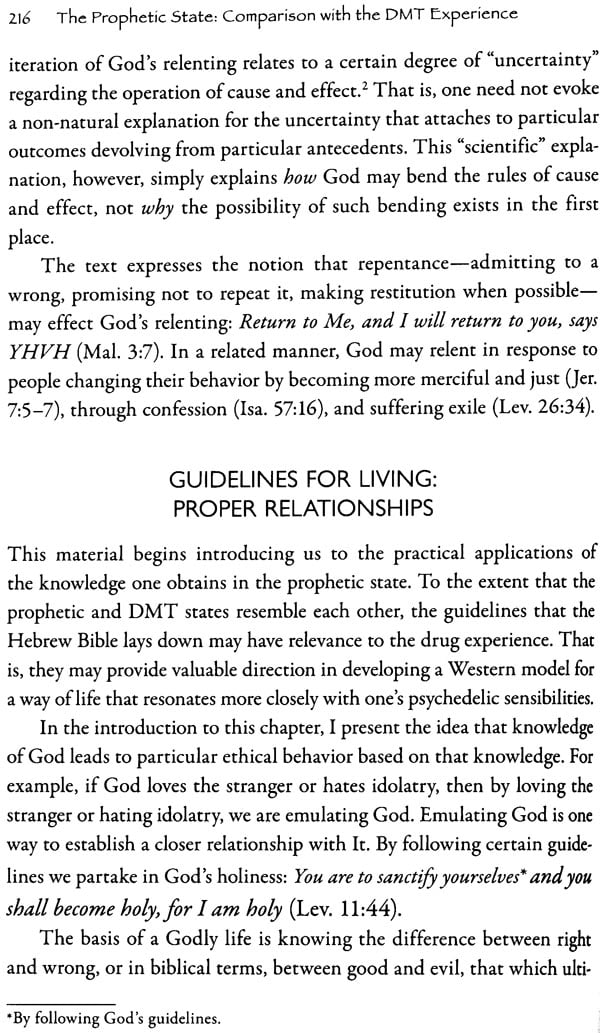 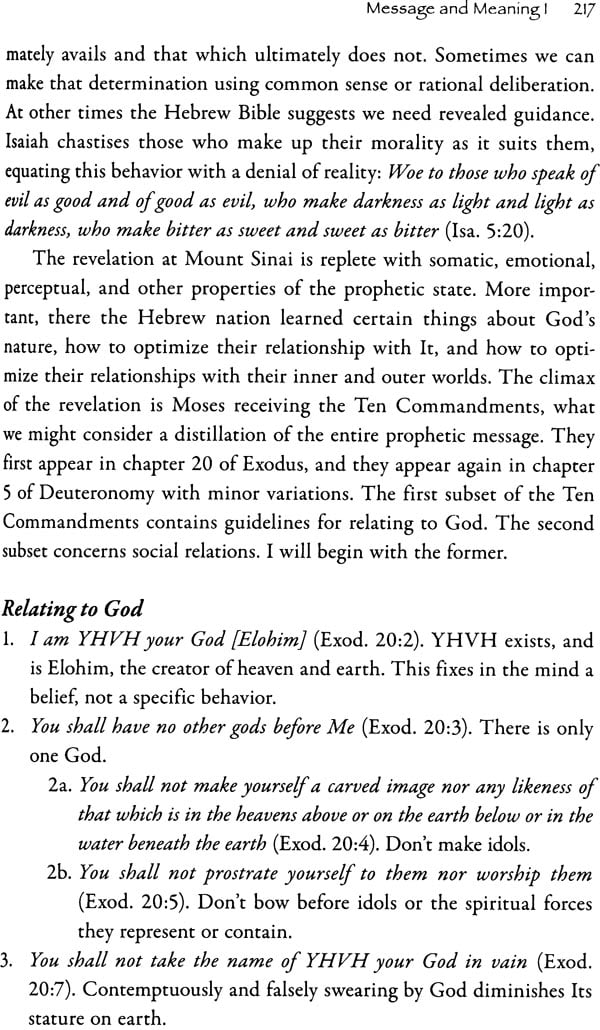 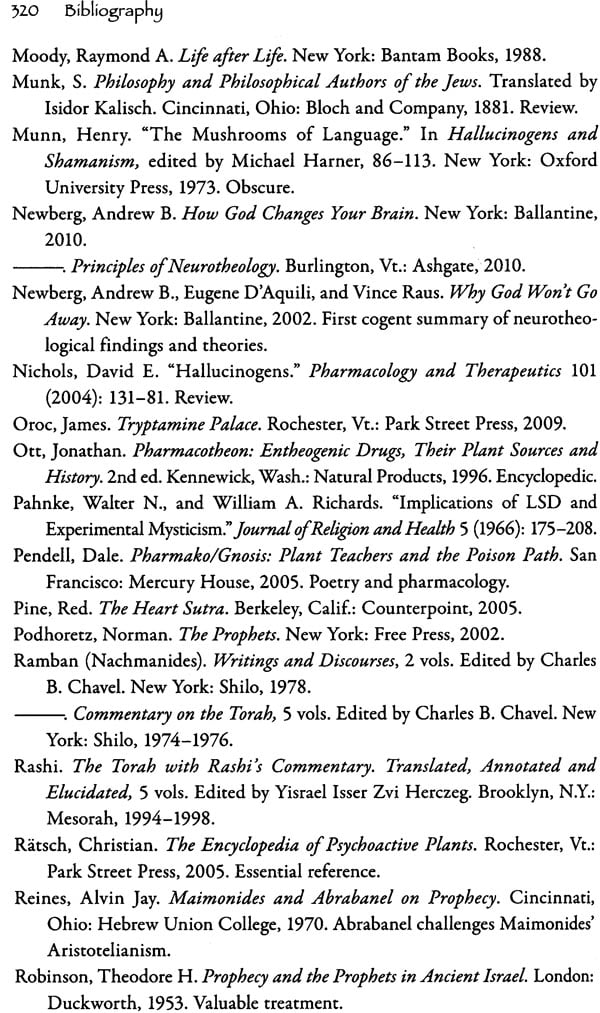 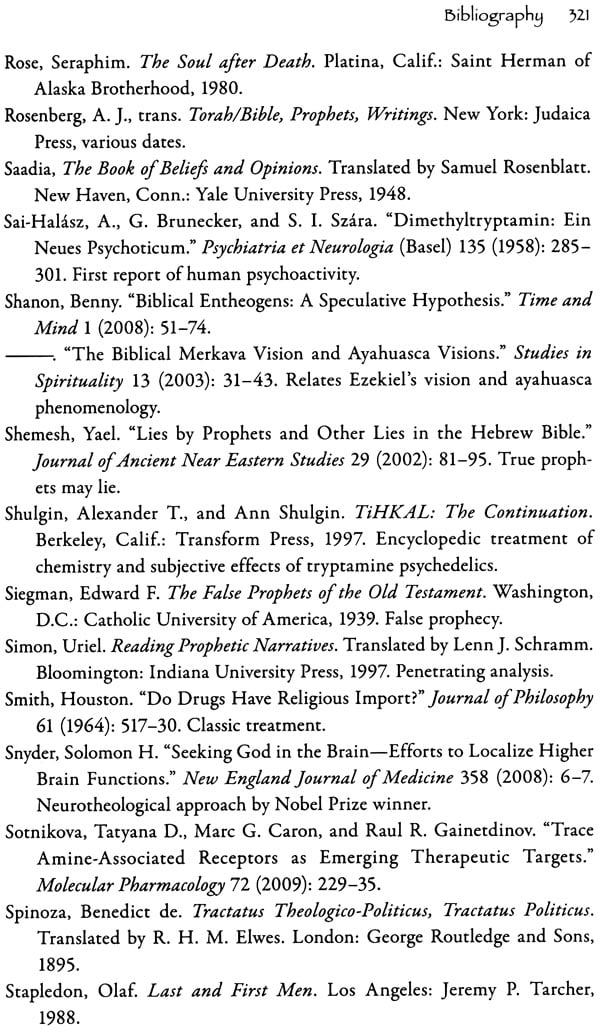 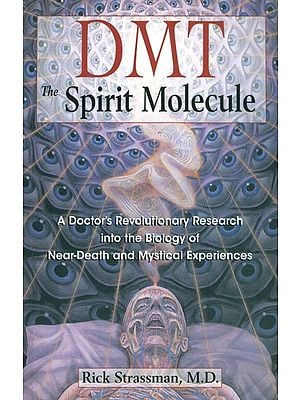 DMT: The Spirit Molecule (A Doctor's Revolutionary Research into the Biology of Near-Death and Mystical Experienes)
By Rick Strassman
$29.00 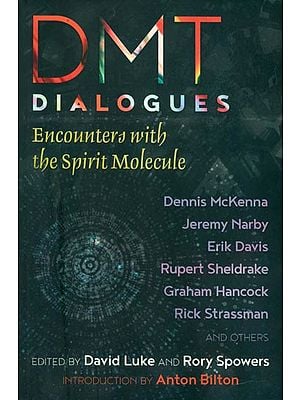