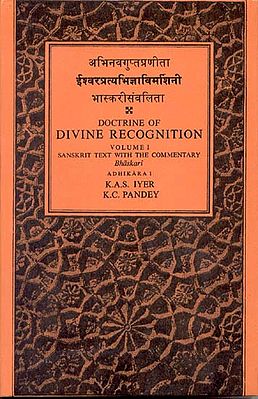 $76.50
Notify me when this item is available
Save to Wishlist Send as E-card Share by Email
About the Book:

Isvarapratyabhijna-Vimarsini, IPV in short, Critique of the Doctrine of Divine Recognition, is the most important work of the Prayabhijna School of Kashmir Saivism. This is a commentary by the great Abhinavagupta on the Isvarapratyabhijna-Sutra (or -Karika) of Utpala, expounded by a commentary Bhaskari of Bhaskarakantha. The original text with Vimarsini and the Bhaskari thereon was edited and published by Dr. K.C. Pandey and Professor K.A. Subramania Iyer, along with English Translation of the IPV by Dr. Pandey, in three volumes under the title, Bhaskari, as the Princess of Wales Saraswati Bhawan Texts Nos. 70, 83 and 84 in the Years 1938, 1950 and 1954 respectively. These works were out of print for long and are now being re-issued under the general title of Isvara-Pratyabnijna-Vimarsini of Abhinavagupta, in three volumes.

This also carries an Introduction giving in brief the History and Literature and philosophy of the Pratyabhijna system along with various appendixes for Vol. I and Vol. II. Vol. III gives English translation of the Isvarapratyabhijna and the Vimarsini.