Echoes from Old Calcutta: Reminiscences of the Days of Warren Hastings, Francis, and Impey 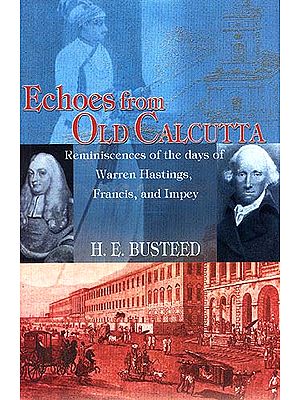 The book illuminates a period of living in Calcutta, and breaths life into a host of characters so diverse and conspicuous in different ways as Warren Hastings, Sir Philip Francis, sir Elijah Impey, rose Aylmer, the painter Zoffany and the future princes Talleyrand. One re-lives-through the book-the mortal agony of the Black Hole, the tender passion of Hastings, and the intrigues and jealousy of Junius. The result of the author's untiring erudition and inexhaustible knowledge, the book is a tribute to an ebullient past.

The fact of a fourth edition of this book being called for suggests that it retains the gratifying opinion formed of it, mainly by readers in India.

To make it more deserving of the favour continued to it, matter has been added to this Edition not appearing in its predecessor, and the book bas been generally amplified during revision by new material collected from time to time. It has also been more liberally illustrated, and furnished with an index and chronology. It may be explained, perhaps, though scarcely necessary even for readers out of India, that the first article deals with an historical event long anterior in point of time to the period mainly contemplated in the title page. Still the subject is one which of necessity finds a place in a volume, such as this, purporting to look back on Old Calcutta.

Mr. S.C. Hill's valuable work has of course been referred to by me when revising this article.

His exhaustive labours facilitate the work of chroniclers who may now or henceforth have occasion to treat of Bengal or Calcutta in 1756-9.

It is satisfactory to recognise that much more interest is now shown in the events and historical characters of the period first named, and of that which followed it, than was the case not many years back.

The recent starting of the much-needed Calcutta Historical Society, and its establishment under very favourable auspices, are promising signs that the growing interest in old times is not to be ephemeral, but is to be fostered into sturdy growth. All well-wishers to Calcutta (indeed to India) must hope for the successful progress of a society which will find much useful work for its kindly hand.

It remains but to express my acknowledgments and thanks to those who have generously enabled me t add some portraits of Anglo-Indian and other celebrities to the illustrations in this edition. I gratefully thank first Dowager The Lady Napier and Ettrick, who not only permitted me to have photographed the portrait of sir John Clavering in her possession, but graciously gave me from herself a photograph of a miniature of his eldest daughter (afterwards Lady Napier) which she sets much store by.

My friend Colonel Lewin, of Parkhurst, Surrey, added to my obligation to him by furnishing me with the best photographs that he had of family portraits of his grandfather.

In conclusion, it is but fair to express my appreciation of the pains taken by Messrs. W. Thacker & Co., to make the most of the illustrative material supplied to them; and of their efforts to insure that this issue of a book long associated with their firm's name, should be worthy in its general out-turn of their established reputation as Publishers.