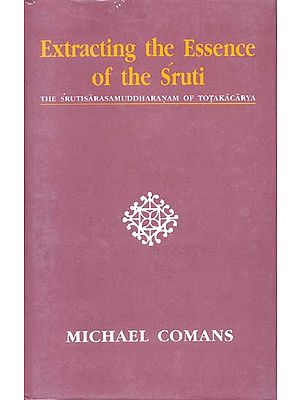 The Srutisarasamuddharanam (Extracting the Essence of the Sruti) is the major work of Totakacarya who is regarded by tradition as one of the four principal disciples of Adi Sankara. Composed in Sanskrit, the work consists of one hundred and seventy-nine verses. The aim of these verses is to bring out the essential meaning of the Upanisads. Through an analysis of various Upanisad statements, as well by compatible reasoning, Sri Totaka shows that the Upanisads teach that Brahman is real, the world is mithya and that the essential nature of the Jiva is none other than Brahman.

The teaching is presented in the form of a dialogue between a student and a guru. Totaka skillfully manages to bring out the main Advaita teachings while maintaining the context of a discussion. These verses are not only valuable for what they teach, but in them we also find an accurate account of the tradition of Advaita as it existed at the time of Sankaracarya himself. Accompanying the Devanagari text of the verses is an English translation of each verse followed by a brief commentary in English to assist in understanding the verses.

Michael Comans is a student of Sri Dayananda Saraswati, one of the great contemporary teachers of Advaita Vedanta. After studying under Dayanandaji for a number of years, Michael returned to Australia where he gained his doctorate in Classical Indian Philosophy. He later had the opportunity to study under some learned scholars of Advaita, notably Pt. Srinivasa Sastri of Pune and Dr. R. Krishnamurti Sastri of Madras. He has a number of publications in the field of Vedanta. He lives in Sydney, where he teaches Vedanta and Sanskrit, and is frequently in India.