As indicated by its very name the book contains topics dealing with facets of the pre-historic civilization of Vedic India. In this book in eighteen articles attempts have been made to throw some light on various aspects of Vedic religion and philosophy, the Vedic concept of god, the birth of mythology in the hymn poetry, characteristics of the Vedic language, the outlook of the Vedic seers on life and death, the social values of the Vedic Aryans, their ecological ideas etc. Attempts have also been made to acquaint the reader with Vedic music and the mechanisms of saman-singing in the rituals. Thus, the book cuts a broad swath of Vedic culture offering the reader a precise and concise presentation of the multifaceted heritage of India.

Ms. Maitreyee Bora is a senior Professor at the Department of Sanskrit and former Dean of the Faculty of Arts, Gauhati University. She graduated with honours in Sanskrit in 1967 from Gauhati University and obtained her Master's Degree in Sanskrit in1970 from the same university. Thereafter, for eight years she devoted herself solely to her duties of a homemaker taking care of the family. In 1969 she joined the Department of Sanskrit, Gauhati University as a Lecturer. In 1983 she obtained her Ph.D Degree for her thesis entitled Sayana's Samavedabhasyopakramanika : A Critical Exposition. She has to her credit a good number of research papers on a wide range of topics from the Vedas and the ancillary texts, which have been published in research journals both in India and abroad.. Another book of hers is an Assamese translation of the three Atharvavedic Upanishads viz. Prasna, Mundaka and Mandukya.

The literature of the Vedas is a treasure of some very fine gems that make up the culture and civilization of ancient India. The people of modern India of twenty first century still owe their Indian identity to this literary edifice of the Vedic people. Every student of the Vedic lore feels within himself or herself an urge to explore this treasure trove in search of its gems. Unravelling the mysteries hidden in the Vedas is by no means an easy task. Many significant works have been done and are still being done by scholars both westen and eastern, on the Vedic Aryans' concepts of religion and philosophy, their spiritual, moral and social values, political ideas, their outlook on life and so on and so forth. The Vedic literature itself and the path finding works of the renowned Indologists have inspired me to make in my own humble way, an attempt to understand the true significance of the Vedic texts. The articles included in this book are the results of this very humble attempt on my part. While writing these articles I have primarily relied on the texts of the Vedas and the Vedangas as well as on the commentary of Sayanacarya. I am indebted to all the Vedic scholars whose works have not only led me to certain important issues and problems contained in the Vedas but also have helped me on many occasions in grasping the significance of some Vedic passages.

The eighteen articles included in this book have been written over a period of twenty years. Barring the articles on Vedic yajna, dharma and on Vedic ecology the rest has been published in various well known research journals. A collection of these articles in the shape of a book is being brought out to facilitate access to a variety of topics from the Vedas in a single volume. I shall consider my efforts fruitful if this book succeeds in attracting the attention of the scholars and students of the Vedic lore.

I express my deepest sense of gratitude to my late parents who inspired me to take up the Vedic language and literature as my chosen field of study. I am grateful to them for having faith in me.

I am thankful to my husband Prof. P.K. Bora and my daughter Dr. Shreemayee Bora for giving me inspiration in all my academic pursuits.

I am thankuful to Dr. R.S. Shukla of Pratibha Prakashan, New Delhi for kindly taking up the task of printing and publishing the book. 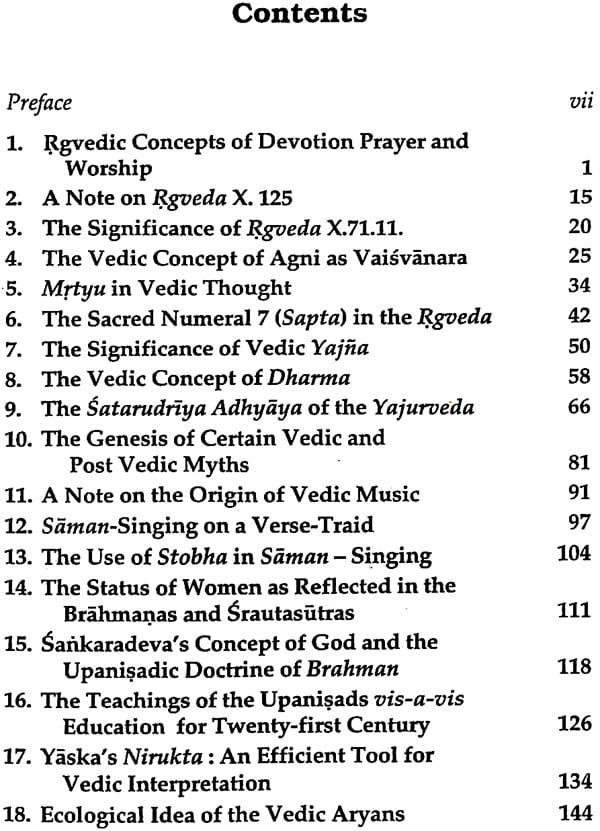 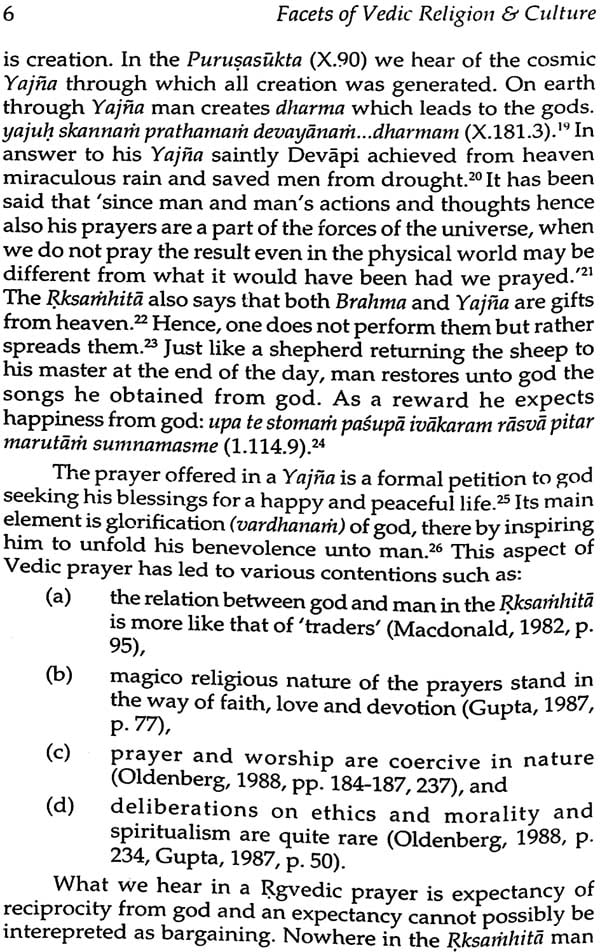 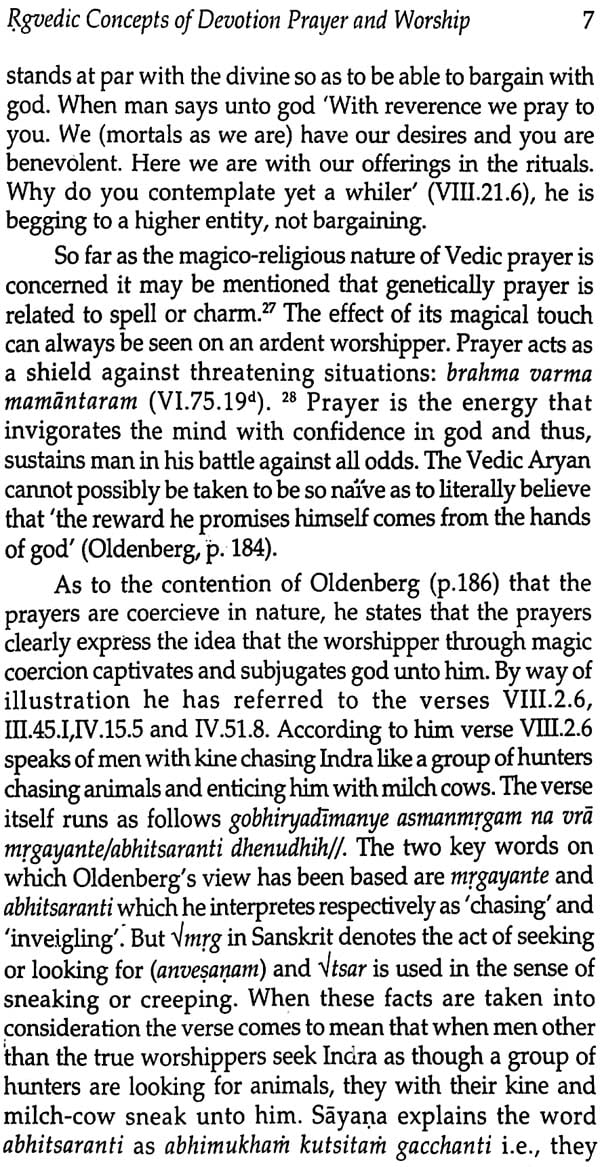 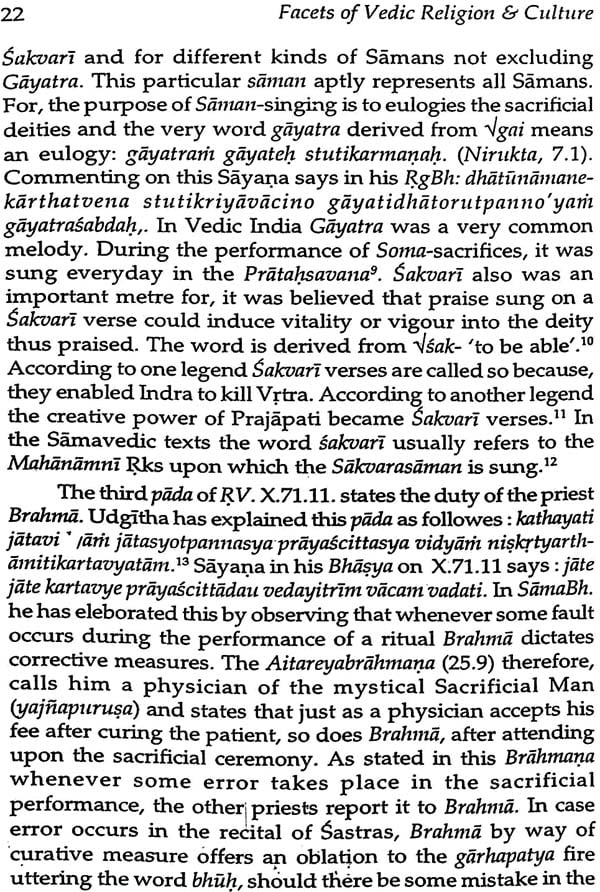 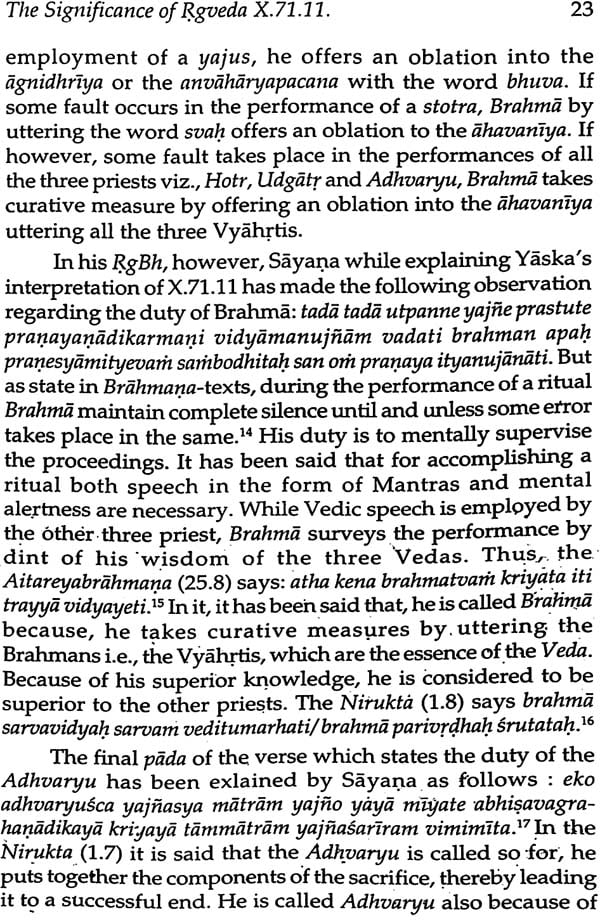 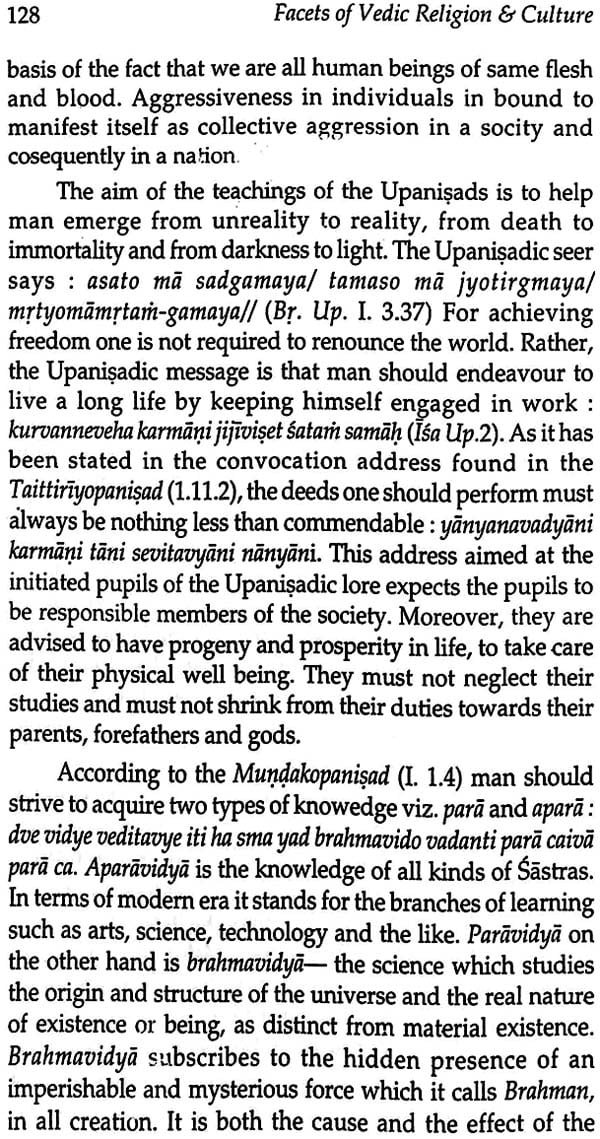 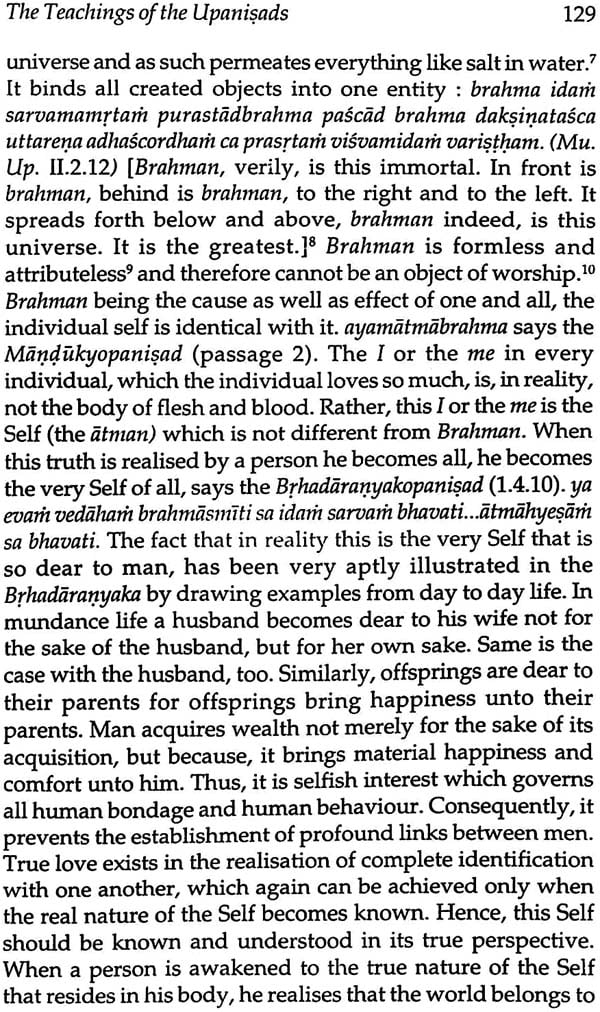 A Vedic Index (Meaning and Explanation of Some Important Vedic Symbols, Words, Images and Concepts in the Words of Sri Aurobindo)
Publisher The Resurgent India Trust
$27
FREE Delivery The Religion of the RigVeda.
By H.D. Griswold
$34.50
FREE Delivery A Classical Dictionary Of Hindu Mythology and Religion Geography, History and Literature
By John Dowson
$32.90
FREE Delivery
$47  (30% off) The Teaching of The Vedas - What Light Does it Throw on The Origin and Development of Religion?
By Maurice Phillips
$31.20
FREE Delivery
$39  (20% off) The Inner Teachings of The Philosophy and Religion of India
By Yogi Ramacharaka
$31.20
FREE Delivery
$39  (20% off)