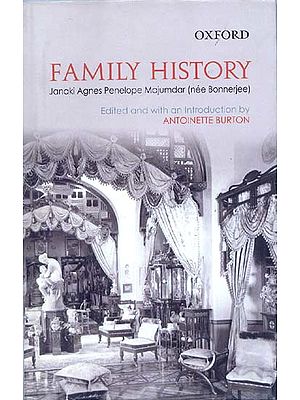 $31.00
Usually ships in 15 days
Notify me when this item is available
Save to Wishlist Send as E-card Share by Email
About the Book:

Written in 1935 and reproduced from a manuscript left to her grandson, Janaki Majumdar's Family History describes the family fortunes of at least two upper-class Bengali families during the period 1870-1945. It traces the lives of three generations of women from the time they were children through adulthood, detailing the choices they made or that were made for them by the male members of their families.

The most significant aspect of this 'history' is its vivid evocation of the cultural dimension of British rule in India and its impact on the domestic world of women and families. The tension between Majumdar's desire to preserve her family's contributions to political history and her struggle to represent her mother as a 'modern' Indian heroine turns her narrative into important evidence of the pressures of British imperial culture on the first generation of Indian nationalists. It also reveals how 'elite' Indian women's experiences of public and private, the nation and the home, are intimately related.

A detailed introduction by Antoinette Burton analyses the ways in which memories of physical space and the emotive attachment to home can be used as sources to document women's agency in the creation of a nation. A highly regarded historian of Victorian Britain, Indian women, and feminism, she argues for the expansion of traditional notions of the archive to include personal memories such as Janaki Majumdar's Family History

This sensitive and well-argued work is a major contribution to feminist historiography on British India, South Asian history, British imperial history, and historiography.

Janaki Agnes Penelope Majumdar (1886-1963) was the daughter of W.C. Bonnerjee, the first president of the Indian National Congress

Antoinette Burton is Professor of History at the University of Illinois, Urbana-Champaign, USA.

Part I
The Majumdar Family