Forget Kathmandu: An Elegy for Democracy 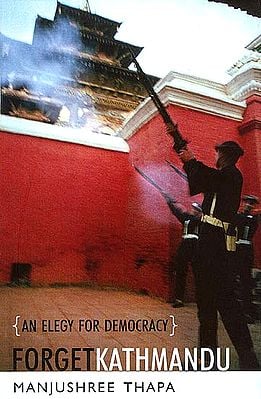 In June 2001, King Birendra Bir Bikram Shah was killed in a massacre at Kathmandu's Narayanhiti royal palace, allegedly byhis own son, the crown prince, and the world took new notice of Nepal. Since then, several thousand lives have been lost to a violent Maoist insurgency and repressive state counter-insurgency and repressive state counter-insurgency. Parliamentary democracy, too - won late, in 1990 - has been lost. And there are no clear indications of how long it will be before the civil war ends and popular government is restored.

In this illuminating study of the tangled politics of her country, Manjushree Thapa examines what has gone wrong, and why. Starting with an account of the Narayanhiti massacre and its aftermath, she goes back in time to trace the history, often chaotic, o Nepal's monarchy since unification in the 18th century, and of the struggle, in the 20th century, for genuine democracy. She ends with a record of her trek into Maoistheld territories in west Nepal, where the majority continue to live in poverty, human rights abuses are on the rise, and body and girls as young as thirteen have taken to the gun.

A skilful mix of history, reportage, memoir and travel writing, Forget Kathmandu is an unprecedented examination of Nepal's past and present. The gifts of insight and lucidity that Thapa brings to her intensely political narrative make this one of the finest works of non-fiction from the subcontinent in recent times.

Manjushree Thapa is the author of the widely acclaimed novel The Tutor of History. Her other published works include a travelogue, Mustang Bhot in Fragments, and translations of Nepali literature. Her essays and short stories have appeared in several anthologies, journals and magazines in Nepal, India and USA.

Manjushree Thapa lives in Kathmandu, where she helps to manage Martin Chautari, a centre for public interest and advocacy.

'In [this] fictionalized account of an election compaign in Tanahun district, Manjushree Thapa has woven a splendid tale of how the spirit and energy of multiparty politics has seeped into the lowest levels of Nepali society  Thapa's easy pace and smooth flow make The Tutor of History an irresistible saga of contemporary Nepal where it is often difficult to separate the political from the personal'

'Manjushree Thapa weaves a tale rippling with the undercurrents that cause upheavals in the destinies of ordinary peopleThe power of Thapa's carefully wrought prose [is] as manifest in her delineation of character as in her exploration of the larger issuesThe Tutor of History weaves its way into our consciousness, lingering there, to be recollected in tranquility'

'The Tutor of History pivots on that most subcontinental of things, the run-up to an election, but embraces the themes of the loss of history, the slow emancipation of women, the lure and pitfalls of love, and the struggles of men to be a little more than what their fates have marked out for themAn impressive debut - both for the insight it offers into a neighbouring country, and for the lessons of hope and charity amid corruption and disorder that it offers'