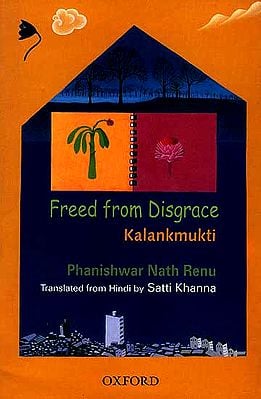 Not since Premchand has any writer in Hindi penetrated the experience of the rural poor with as much empathy as has Phanishwar Nath Renu. In his writing, he juxtaposes the roles of different members of a small-town community to create the effect of a many-layered life, moving from one story to another, creating vibrant and complex narrative.

Freed from Disgrace, his third novel, is set not in the countryside but in the capital city of Patna. The world of the novel is one of harsh contrary energies in the lives of women. Bela, a former freedom fighter, administers a hostel for working women in the district of Bankipur. Betrayals and disappointment in love has deepened her selflessness, and she refuses to yield to a corrupt secretary of the board of trustees who wants to use the young boarders for her personal advancement in influencing government officials. In the countryside of Renu's novels, the dynamism of young pioneers wins out.

In the city, the outcome is uncertain. Government officials in the new India have inherited privileges without undergoing education of spirit. Their motto is not the proclaimed motto of the new country: Truth Alone Prevails, but instead, it perversion. In such darkness, the superintendent of the working women's hostel struggles for light. Freed from Disgrace is Renu's passionate account of that struggle.

Renu skillfully condenses each character in a few lines of dialogue while the reader is left to himself or herself to discover the complexity of the novel. The bustle of life, dialect, folk song, and high diction ha few equals in Hindi literature.

This novel will be of interest to students of modernity as well s postcolonial activism, and the general reader.

Phanishwar Nath Renu (1921-77), fiery novelist and social activist from the Bihar hinterland, is the contemporary voice of rural India and one of the first writers to bring regional voices into mainstream Hindi literature. He published two novels, four novellas, sixty-two short stories, and extensive reportage. His novel Maila Anchal (The Soiled Border, 1954) established Renu among the first rank of Hindi Writers.

Satti Khanna the translator, is Associate Professor of Hindi, in the department of Asian and African languages at Duke University (USA). He has worked with national television channels in India and the UK, and interprets the lives of contemporary Indian writers through translation and documentary films.