FROM SACRED SERVANT TO PROFANE PROSTITUTE (A History of the Changing Legal Status of the Devadasis in India, 1857-1947) 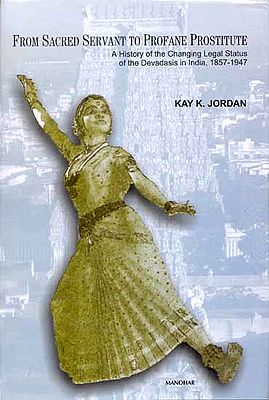 $38.50
Notify me when this item is available
Save to Wishlist Send as E-card Share by Email
About the Book:

From Sacred Servant to Profane Prostitute discusses the devadasi reform movement as a window on changing social, religious, and political values in India between 1857 and 1947. The devadasis were women married to Hindu deities for whom they danced and sang. They frequently became the concubines of either wealthy landholders or brahmins at a time when such behavior was socially acceptable in India. For centuries, Hindus regarded the devadasis as sacred servants of Hindu deities, but by the mid-nineteenth century the British and the Indian Westernized elite considered them to be prostitutes.

This study of court cases, executive correspondence, and legislation traces the shift in the official attitude toward the devadasis. Initially, colonial courts recognized the customary law of the devadasis which included female ownership of property, adoption of daughters, and inheritance from mother to daughter. A reformist judiciary gradually withdrew recognition of these customs by applying passages outlawing prostitution in the 1861 Penal Code to the devadasis. British officials hesitated to ban devadasi dedication because a substantial portion of the Hindu population in Madras Presidency revered the devadasis as religious practitioners. However, in the twentieth century, Indian members of the central and provincial legislatures vigorously and successfully advocated devadasi reform legislation.

The British and the Indian Westernized elite believed that devadasi reform legislation raised the status of Indian womanhood by eliminating the evil of temple prostitution. But the impact of devadasi reform was paradoxical, since it abolished the only class of female ritual specialists in Hindu temples and forced a previously independent group of women to marry and subject themselves to patriarchal family structures.

Kay K. Jordan is an Associate Professor of Religious Studies at Radford University in Virginia where she teaches courses in Religion in India, Religion in China and Japan, and Religion and Women. She received an M.A. and Ph.D. in Religion from the University of lowa as well as a Master's degree in Social Studies from Western State College of Colorado. Her research in India on the devadasis was funded by a Fulbright Grant. Dr. Jordan is interested in doing further research on women in India, and on S. Muthulakshmi Reddy, in particular. She served as Secretary of the Society for Hindu-Christian Studies for several Years. Professor Jordan is also the Secretary of the Virginia Conference of the American Association of University Professors. The common thread that runs through her teaching, scholarship, and professional activities is concern for human rights, expanding opportunities for women throughout the world, and academic freedom.

A Guide to Transliteration