Futuh Al-Ghaib (The Revelations of the Unseen) 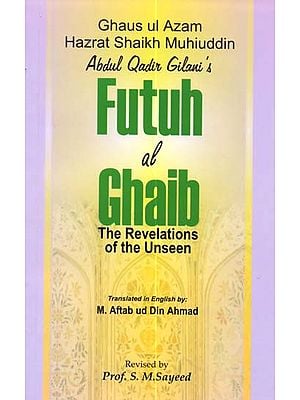 Hazrat Syed Abdul Qadir Gilani-the Saint of Baghdad (mercy of Allah upon him)-does not stand in need of an introduction to the Muslim world. Among the books associated with his name, the Futuh al-Ghaib has acquired a fame that falls to the lot of very few works of this kind. Born in a province whose people are highly imaginative and mystical by nature. I felt quite early in my life drawn towards the personality of this Saint. The later rationalistic meanderings of my mind, however, disturbed the natural development of this admiration. It was, however. at the suggestion of a Bengali Muslim friend that I ultimately made up my mind to go through this particular book with a scrutiny that would enable me to present to the English- speaking world the precious gems that fell from the lips of this great mystic of the Middle East. The fruits of my first labour. however, were not so happy ....

The book is evidently mystical, though not too mystical for an average intelligent man with a little introspection. It seems that the world is too much taken up with questions of material existence to find any time for a study of this nature. And yet the social and political upheavals all the world over, making the question of life and existence so uncertain, have, I believe, created a proper psychological background for the study of such a book as this. I should not be taken to mean that I am suggesting or that Islam suggests an escapist attitude under such circumstances. Islam never tries to create the escapist mentality nor does the present book encourage such a frame of mind. We are, however, for a change in the mental out-look of man which will bring about an. actual solution of the tangles confronting our species in this age. It is not difficult to see that the lack of a higher vision of life has resulted in an over-emphasis on comparatively less important aspects of our worldly existence. which in its turn has been the root cause of all our strifes, It is hoped that a perusal of books such as this will open the eyes of people to that higher vision and lessen the heat of ruinous competition in the field of material acquisition.

The Arabic text in my hand is the one which is to be found in an Urdu translation of the book entitled Futuh al-Ghaib Mutarjam, by Maulvi Sikandar Shah of Benares. As this translator assures us in his introduction, he took great pains in securing the complete and correct text of the original Arabic before he took up his work of Urdu translation, and yet the text which accompanies this translation is not free from mistakes some of which are extremely disappointing. One will understand what I mean if one examines carefully pages 46 to 49. In spite of this drawback, the text may be regarded as fairly dependable and helpful in that it provides vital points which are fairly accurate. As for the Urdu translation itself, though rather free here and there, it undoubtedly shows the deep learning of the translator as well as his acquaintance with matters connected with Islamic spiritual science, otherwise known as tasawuf.

A few words about this science will, I hope, be of use to such of the readers as are not conversant with the traditions of Islam. The word “mysticism” which is generally used to indicate this aspect of Islam is a little misleading. The English word has an elusive atmosphere about it, whereas “tasawwuf” is a regular science with its set laws and a full scheme in detail. It is based on palpable experiences which can be reproduced, like in any other science, under set circumstances: Every pilgrim has to pass through the same stages in his spiritual journey and these stages are readily recognisable by their detailed descriptions given unanimously by all masters. The landmarks and pitfalls are described in equally exhaustive particulars. Just as in any other course of study, there are methods in it to test the progress of the disciple and his merit. As in any other branch of know- ledge, there are geniuses in this branch of study who create a stir in the world, but even the humblest learner can at least aspire to develop a living sense of the presence of God in the midst of our struggle for material existence. He also develops a taste for this culture and an interest in those who follow this path and thereby acquires an increasing control over his passions and desires for things worldly. It can be readily understood that this paves the way for real social peace, the crying need of the times. As for the more gifted pilgrims, but for them God would be a mere hypothesis. It is these experiences that have made God a palpable fact of experience and have made thinking humanity believe in the continuity of life after death. It is they who radiate a faith in life everlasting which in its turn takes away the sting from death and enables us, average men, to view life with a sense of ease. They attain to a perfect certainty about the existence of God by a speaking contact with Him and thereby act as the vicegerents of the Holy Prophet (may Allah’s peace and blessings be upon him). It is to these people that the Holy Prophet refers in his off-quoted saying: “The learned among my followers are like the prophets of Israel” or in another saying: “The learned are the successors of the Prophets”

The law being complete in the shape of the Holy Qur’an, no Prophet is needed after the Holy Prophet (may Allah’s peace and blessings be. upon him) yet these spiritual luminaries must be there to testify to the existence of God, to the truth of the Qur’anic revelation, and to the continuity of the Holy Prophet’s spiritual regime. Without these personalities belief in all these verities will be reduced into a mere make believe, devoid of any power to influence people’s thought and action. This has exactly been the fate of all religions excepting Islam, which, though professed by a politically backward people at the moment, is yet rich in the tradition of these living experiences.

I, therefore, appeal to the scientific-minded people of other faiths to read these discourses carefully and ascertain for them- selves if their approach is not a perfectly scientific one. And we should bear in mind that this is only one of many such works by people of this line. In fact, it is these works that have saved Islamic theology from appearing the dry thing which it is ill every other religion. It is not here a speculative philosophy or a dogmatic theology, but an experimental science with its attractions as such. To describe briefly the general framework of this science, human consciousness is divided into three conditions rising upward in the scale of evolution:

In the first stage man is a pure animals, restless self- animal urges, impatient of restrictions and stranger to any pricking of conscience. By a systematic course of religious training, of which obedience to commands and prohibitions is the chief feature, he develops a sense of propriety and impropriety and repents after every falling into error. This is the Lawwama state. This stage begins with a faint dawning of the moral sense and ends in a complete surrender of the animal ego in man, which marks the third and the highest stage, viz. Mutmaima. The struggle between the lower and the higher selves having now ended, the pilgrim enters a condition of perfect peace, of purity, of rectitude, and of knowledge.

To indicate the experiences, starting from the threshold of this stage, further on, the Sufis have coined three more terms:

1. Fana. A complete Subjugation of the animal self. At this stage man ceases to be disturbed by any urge of desire. The only urge left in him is prayerful surrender of his whole being.

2. Baqa. This means a restoration of the self in a new consciousness, this time not of the flesh but of the spirit. The urges of the self are no longer from the animal passions which drive a person to acts involving violation of others’ rights and this leading to disturbance in the society, but from Allah- controlled spiritual region, the source of actions invariably beneficial to humanity and creation.

3. Liqa. This is the stage wherein man’s spiritual knowledge rises to such a high pitch that the rewards for his faith, sincerity and devotion no longer remain a matter of belief but a palpable certainty and an experience, as if he has then already and his faith in Allah reaches a point wherein it seems to him that he is seeing Him face to face. Such a man becomes free from all fears about the future and from all sorrows about the present and past. In such a condition a man is free from all hesitation and obscurity of judgment and doubts and misgivings. In this condition the devotee is coloured by the attributes of Allah in the manner of a piece of iron, assuming the colour of fire if it is kept long enough in it. And in moments of commotion such a man’s feelings partake of Divine-powers, so much so that this pleasure brings in the pleasure and blessing of Allah and his anger brings the wrath and curse of Allah, and events seemingly contrary to the laws of nature come into being through his attention. Receiving powers from Allah he possesses a poser of creation. He creates events and even determines the course of history. 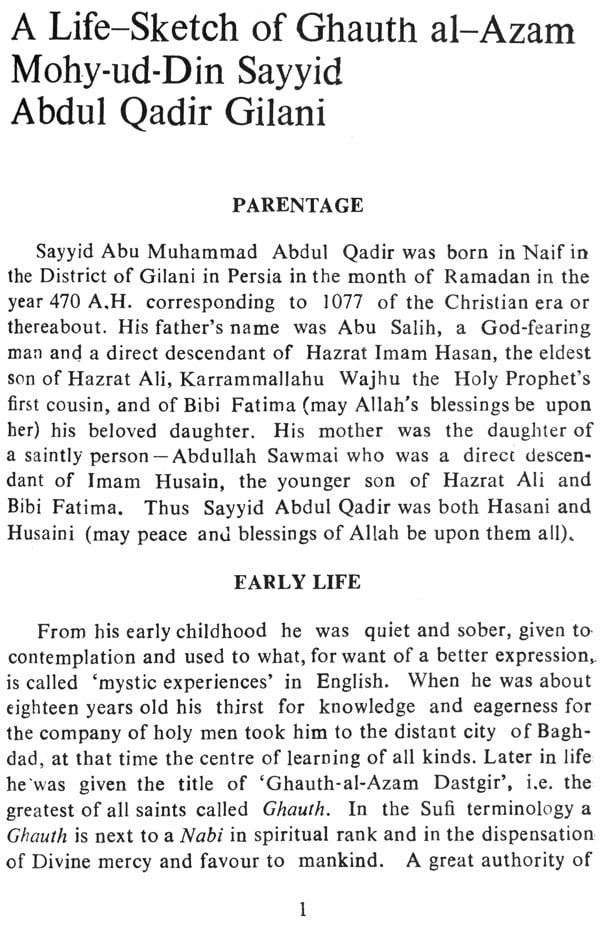 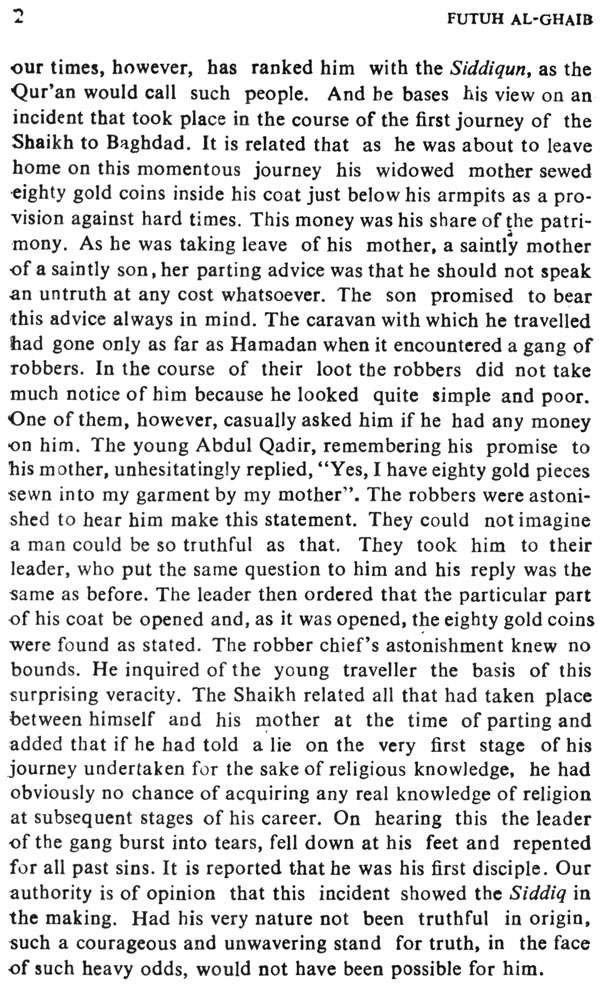 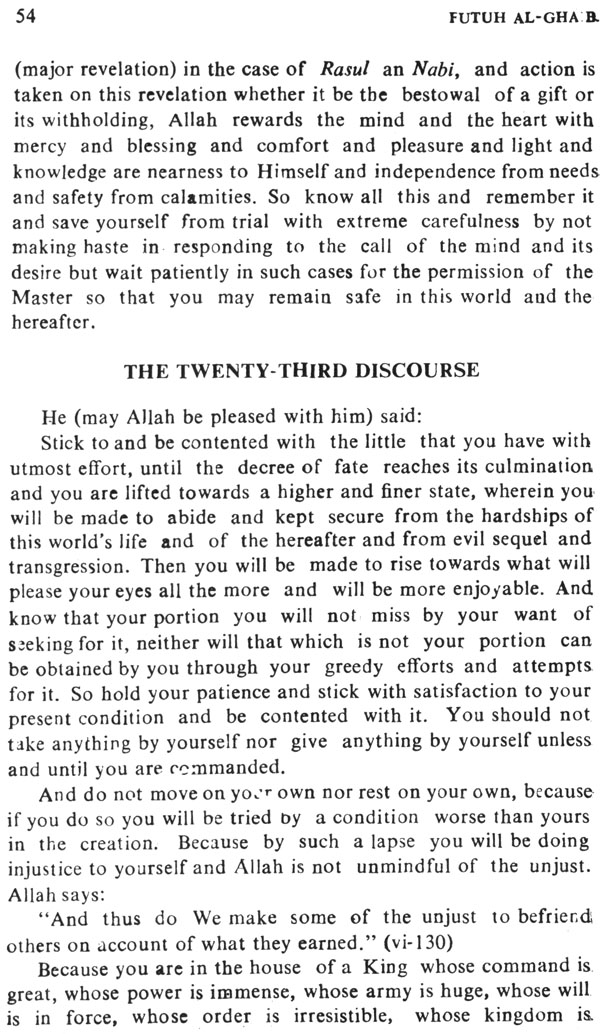 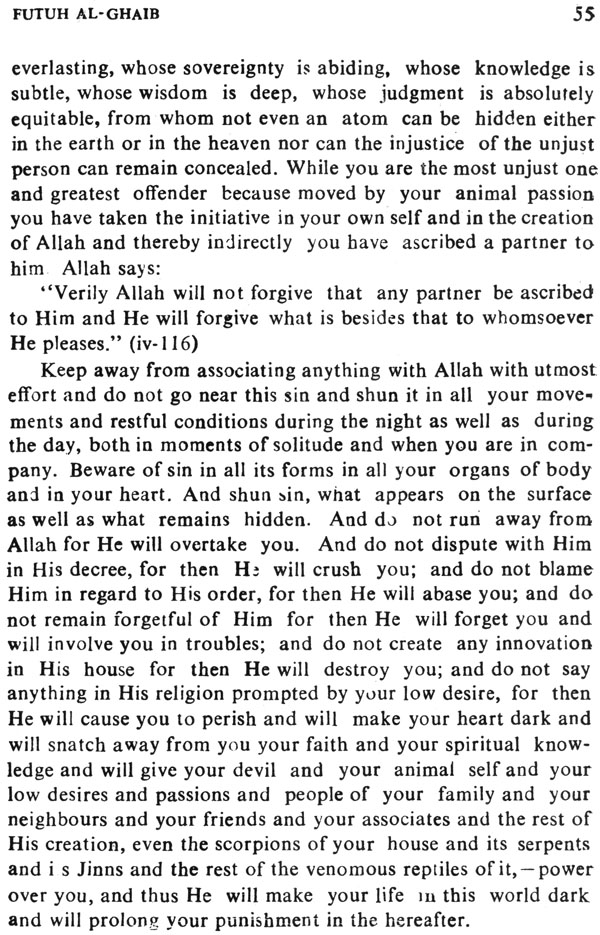 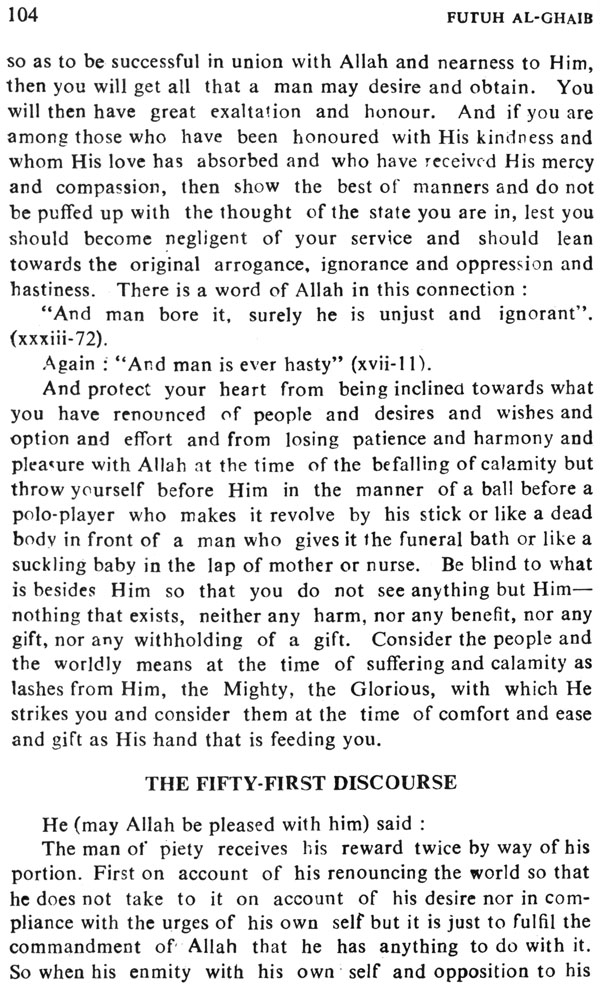 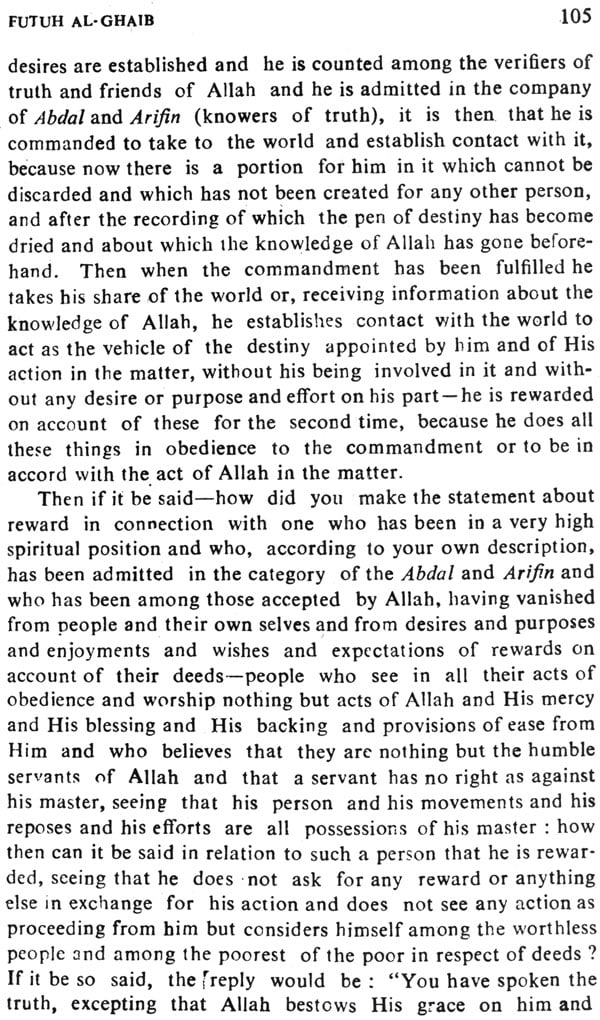 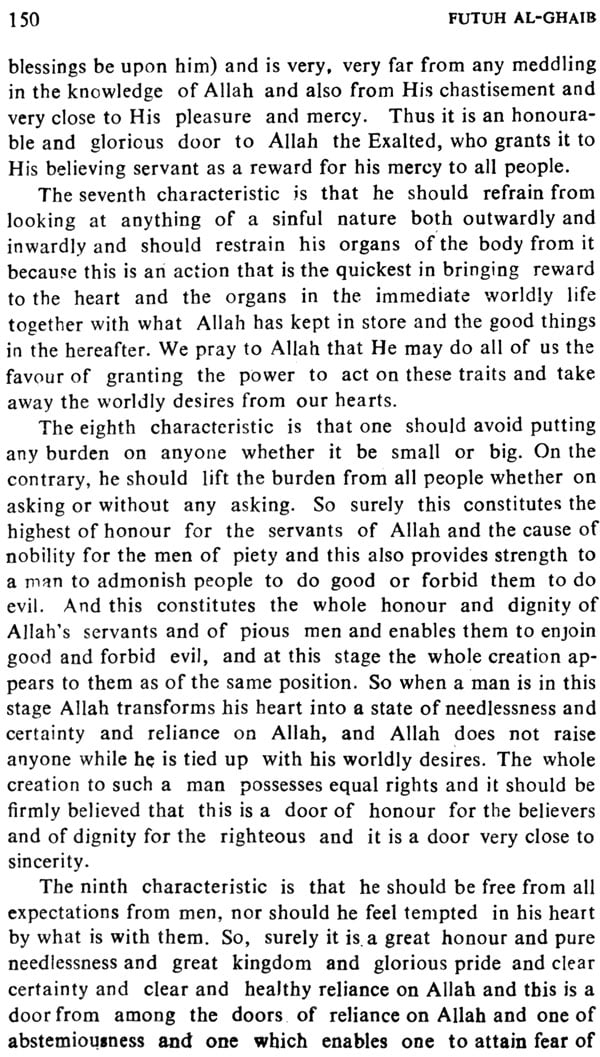 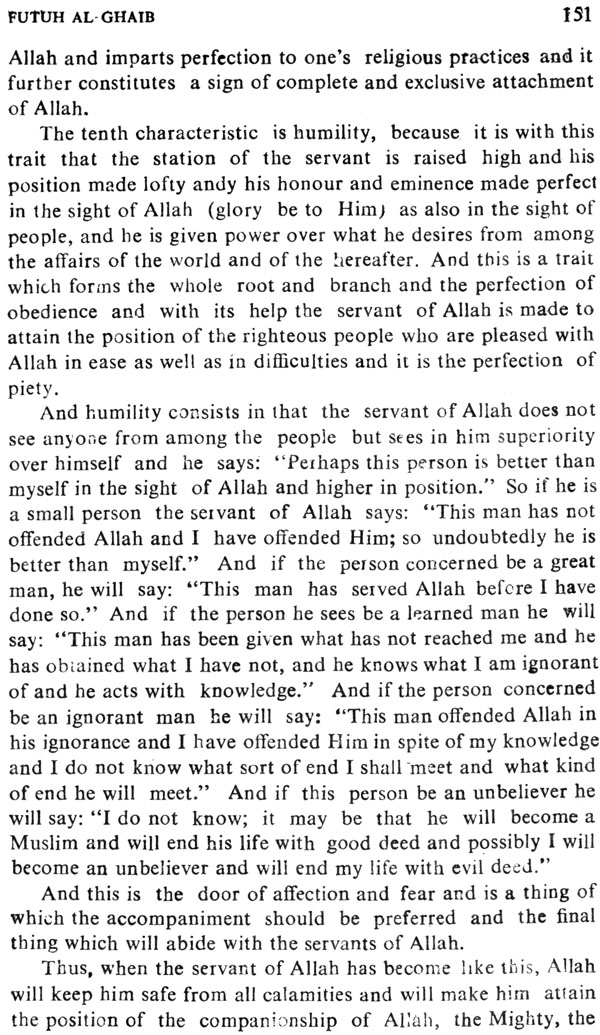