THE GENESIS OF AN ORIENTALIST: THOMAS WILLIAM RHYS DAVIDS IN SRILANKA 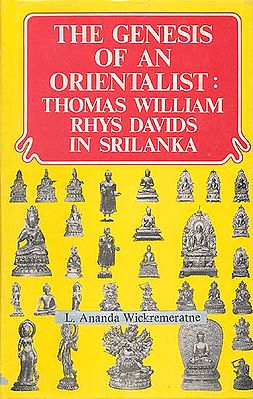 $19.00
Notify me when this item is available
Save to Wishlist Send as E-card Share by Email
About the Book:

It was left to Rhys Davids, virtually the first European scholar to devote himself exclusively to Pali and Buddhism, to unlock the key to Pali and point out to his contemporaries the rich vistas that lay beyond. In doing so he made it possible to begin the systematic study of Buddhism which had been undertaken sans consistency and method.

Rhys David's relationship to Sri Lankan Buddhism and Pali was broadly analogous to that of Max Muller to India and Sanskrit. He epitomized an enlightenment or attitude to emacipation altogether rare in the nineteenth-century European view of non-European cultures.

The author has used Rhys Davids to investigate the nature of Western attempts - with implied Europocentric attitudes - to interpret characteristically Asian culture and religious institutions. The book focuses on Buddhism and the attempts of Westerners in the second half of the nineteenth century to interpret what was at the time regarded as a comparatively unknown oriental faith. Rhys Davids' capacity for empathizing with alien cultures was remarkable. Rhys Davids, in short, was a pioneer in trans-cultural understanding and had a clear grasp of its issues. He saw that Indian religious ideas - especially Buddhism - would exert a powerful influence in the West to become part of the prevailing idiom and ideology. What is today a tiresome commonplace was not thought even remotely possible in his day.

It is a curious fact that there has been no biography on Rhys Davids. He was of the very stuffVictorian biographies were made of, exemplifying in particular its grand delusive moral that misfortune, human frailties, social disabilities, and class distinctions can somehow be changed or overcome by the transforming power of character, perseverance, and of course, faith. This book is not, however, an act of biographical resurrection. It focuses instead on the work and ideas of Rhyms Davids and attempts to relate Rhys Davids to themes which continue to play a significant part in East-West cultural dialogue.

Ananda Wickremeratne, who graduated with honours in History from the University of Ceylon in 1961, won a Commonwealth Scholarship in 1963 to Oxford University where he received his doctoral degree in 1965. He re-visited England in 1974 on a Commonwealth Academic Staff Fellowship to the School of Oriental and African Studies in London University. He came to U.S.A. early in 1979 following the award of visiting fellowship both to the Center for the Study of World Religions in Harvard University, as well as to the Department of Anthropology. Dr. Wickremeratne, who has been for several years a member of the teaching staff in the University of Sri Lanka, has a number of publications on social and cultural history. He is at present an Associate of the Committee on Southern Asian Studies in the University of Chicago, and is currently engaged in writing a book on the diffusions of Eastern religious ideas in America and their incorporation with the matrix of American religious consciousness.