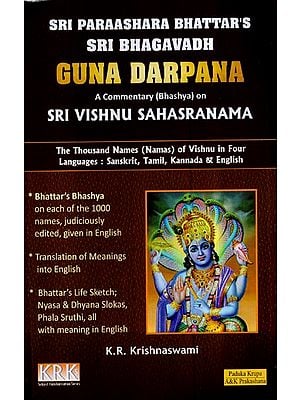 After a brilliant academic career finishing with a professional Engineering course at the Indian Institute of Science, Bangalore, Sri K.R. Krishnaswami proceeded to Hamburg (in the then West Germany) having been selected by the Ministry of Scientific Research and Cultural Affairs as a Nehru Scholar through their All India search, for specialization in the field of Petroleum Refining. On returning to India he was Invited to join the CSIR pool as an UPSC Grade I Officer and placed at the Indian Institute of Science, Bangalore. He was then picked up By the English company, Imperial Chemical Industries (ICI India) from where he retired as a Senior Sales Manager.

Always interested in the religious and spiritual field, he applied himself seriously in the last 3-4 decades, absorbing religious literature / training himself in 4000 Divya Prabhandam and Yajurveda (finishing with Samhitas) attending Kalakshepam on Upanishads and Dlvya Prabhandam. Simultaneously he participated in programmes of recitation of Divya Prabhanadam and Vedas largely in temples. This training has enabled him to look at Srivaishnava subjects from both the angles - the purport emanating from Shruthis as also Sri Sukthis of Azhwars.

Setting up a publication facility in 2000, he has published about 50 books - besides his own titles in English, he has also brought out religious books written by famous authors in Kannada. Outside this he spear - headed a venture to translate Divya prabhandam into Kannada enlisting the help of a well-known author in the field, and brought out 6 books accounting for 1500 songs out of a total 4000.

He has in the last three decades, undertaken the work of improving / renovating / restoring the past glory of some temples in A.P. / T.N / Karnataka. Special mention should be made of his untiring efforts to transform a sleepy, dilapidated and neglected shrine viz Sathyagalam Into a buzzing pilgrimage centre. Other very important projects handled by him include the constructions of 76 feet tall Rajagopuram at Madhyarangam, and renovation / reconstruction of about 7 centuries old Desikar Sannidhi at Melkote.

The Lord has His ways. Probably some years ago there might have been an itch to attempt the big project of translating Bhattar's work on Vishnu Sahasranaamam in a lucid style amenable to easy reading by my readers. But there had been a flood of ideas during that period - urge to complete Sri Ramanuja's full works in some form (5 Vols), 4000 Divya Prabhandham (8 Vols), Srimad Bhaagavatha Mahaapuraanam (4 Vols), Chillarei Rahasyangal (3 Vols) besides two Rahasya granthas, Desika's selected classics, and other seminal works like Vedas/puraanas/agamas/Brahma vidyas and so on which kept me totally busy. Suddenly I realised I was past 80 and that attempting Bhattar's mammoth mirror of Lord's auspicious qualities was not within my reach.

But that was my level of thinking ! The Lord had other ideas ! Coronavirus rendered me free of certain vocations like my close association in terms of sevas/sevaakaalams at Andavan Ashramam and I realised that I could take up something to fill the void ! First I brought out a sort of 'do's and don'ts' (`sampradhaaya' hand book) manual for the benefit of young Srivaishnavaas living overseas in particular. After finishing it, I weighed the possibility of realising my old wish of attempting Bhattar's magnum opus and boldly decided to take the plunge !

I used to mention jocularly to my well-wishers that Sri Ramanuja had managed to execute the three ambitious wishes of Sri Yaamunaachaarya viz. commentaries on Brahma Soothra, Thiruvoimozhi with Pillaan's Vyakyaanam and Sri Vishnu Sahasranaama. In the so called productive period of my writing I had attempted the first two already and only the third had remained untouched. Thanks to Lord's grace, who reads your heart, the third one also got addressed to. I must admit that completing this work at my present age gave me immense satisfaction. I cannot ask for more from the Lord !

A few words about the book. My readers are now used to a certain style of presentation, crisp and complete and that they should not be taxed with what could be considered avoidable and too heavy ; but at the same time the work called for executing it with utmost fidelity and the present work fits this bill. All that I have done is that a 'broad-summarising' of the somewhat long biographical and introductory details, besides doing away with additional parts which repeat or substantiate Bhattar's statements (like Niruktha) and grammatical analysis of some words (word-construction) which do not interest my readers. At some places I have used my judgement in sizing up long commentaries. Even with all these ideas, the size has shot up to 450 pages !

Authors attempting such classic works necessarily fall back on past authors, which provides a stamp of acceptability. In my case I could lay hands only on 2 or 3 books of recent past. It is my view that the product on describing the Lord, which effort cannot match any other subject, has turned out to be true to its author and his magnum opus. Judgment, however, is in reader's hands !

The none-too-easy task of DTP type-setting has been ably handled by Smt. Sudha, and the printing assignment was in the safe hands of Sri Raghavendra of Vagartha Press. The graphic design of outside cover was handled by Sri Dinesh / Sri Naveen of Hamsanikethan. I wish them covid-free health and I have no doubt that Lord Vishnu will shower His blessings on them. 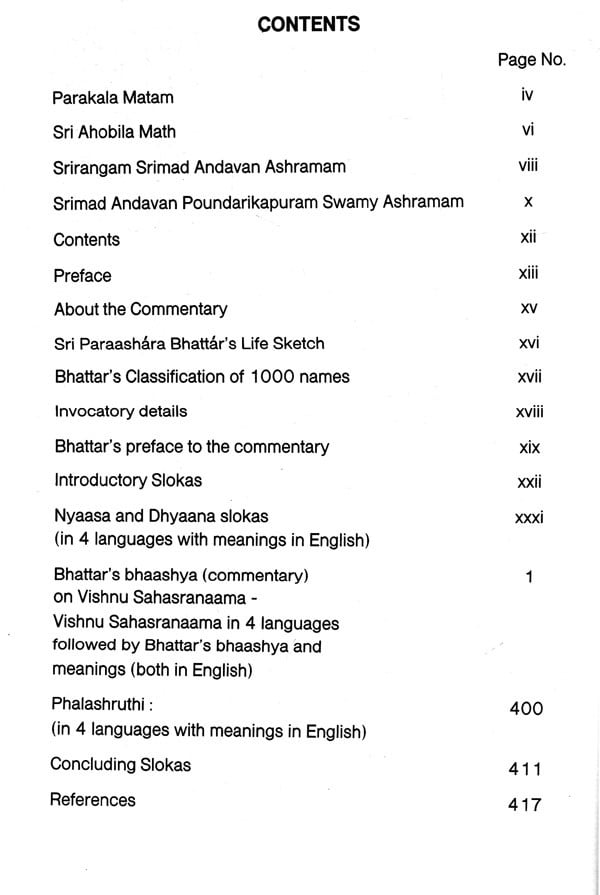 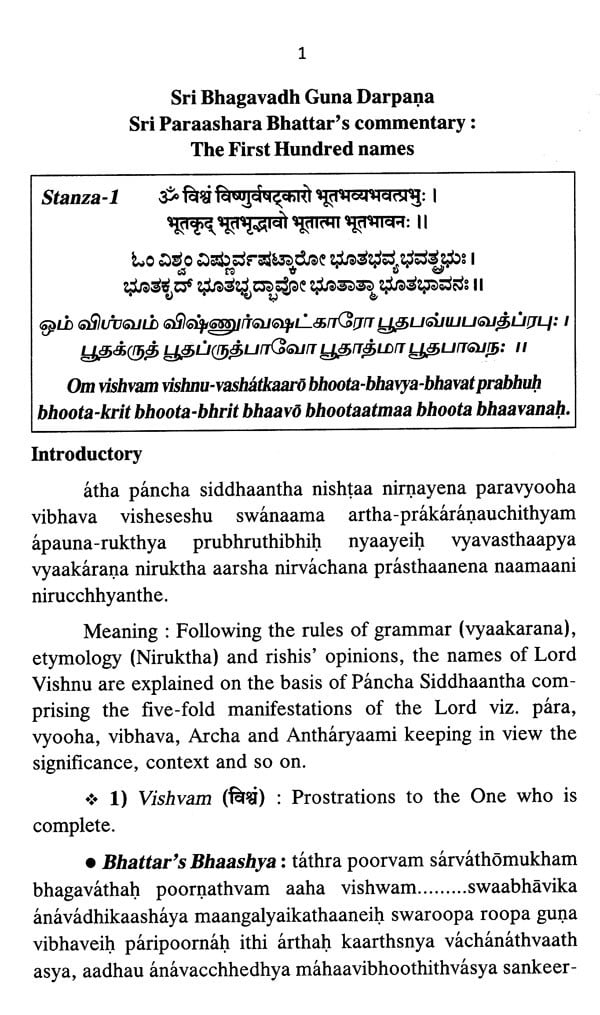 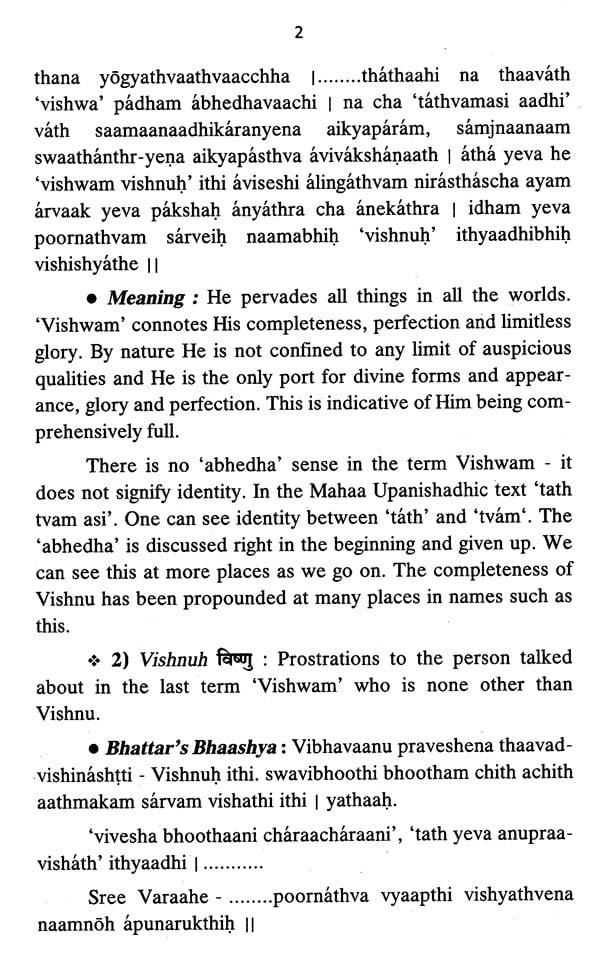 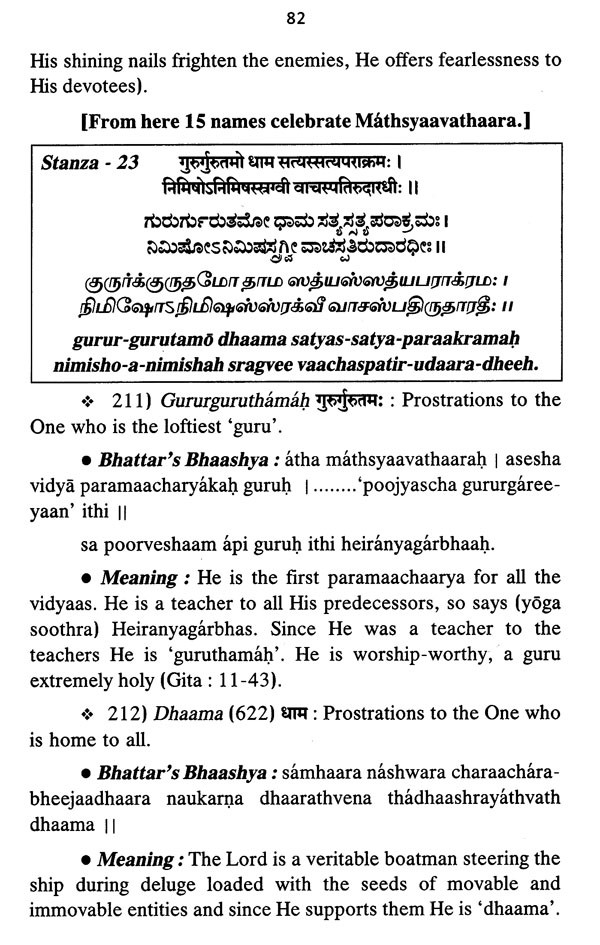 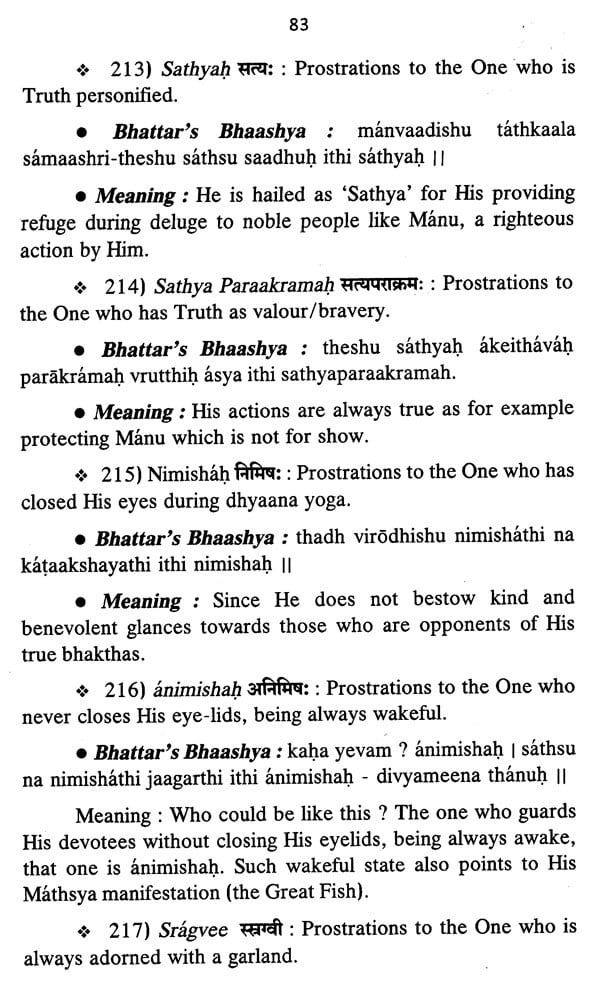 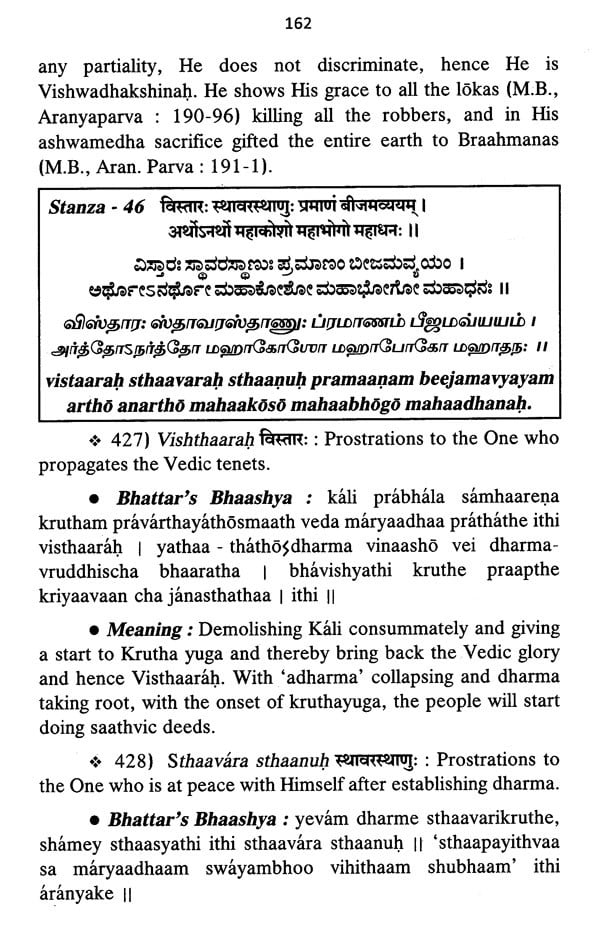 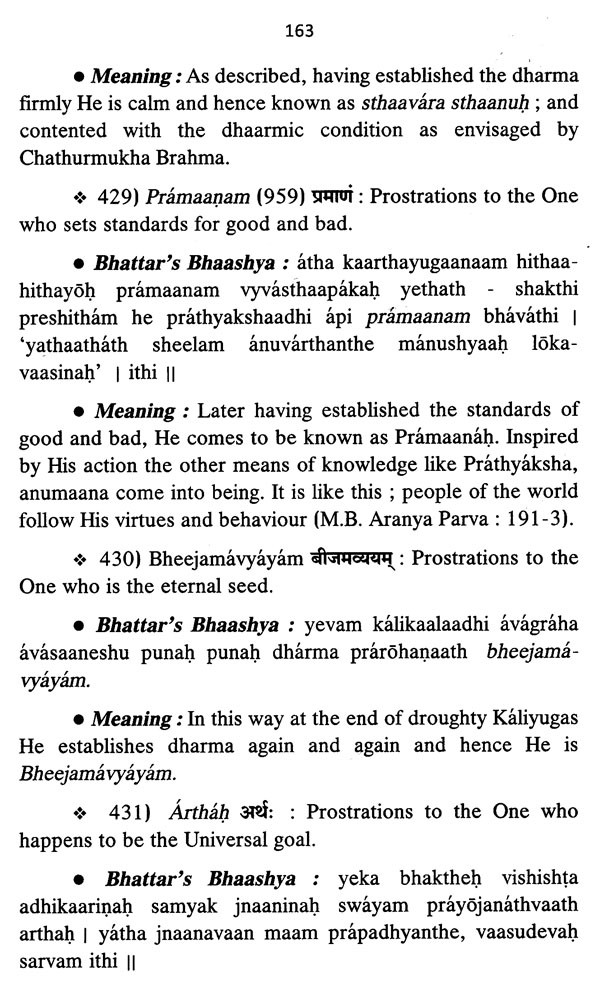 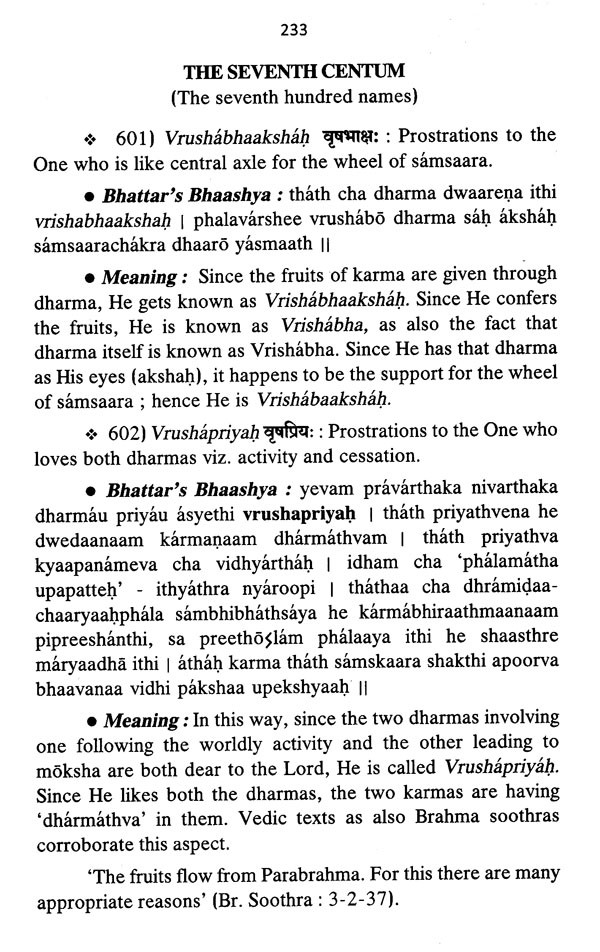 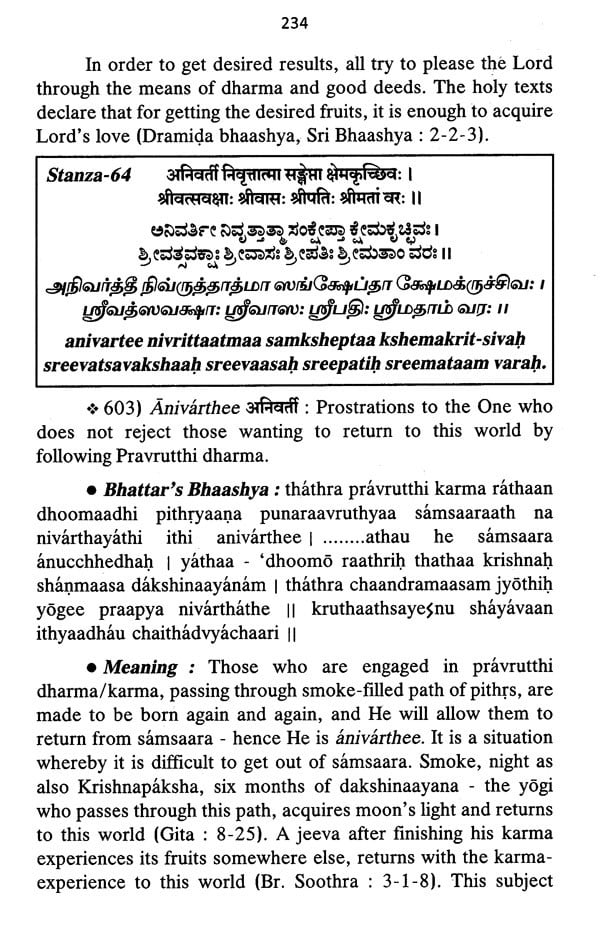 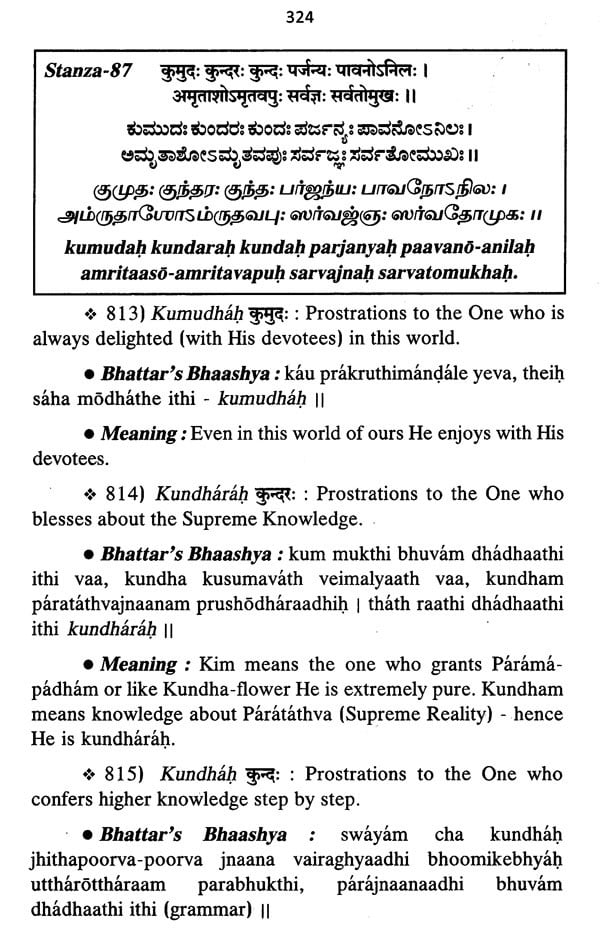 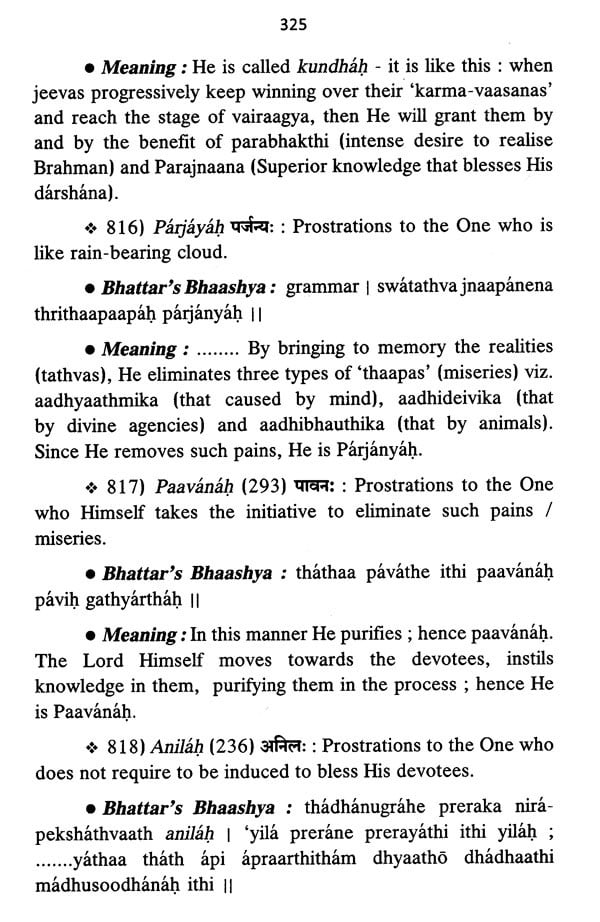