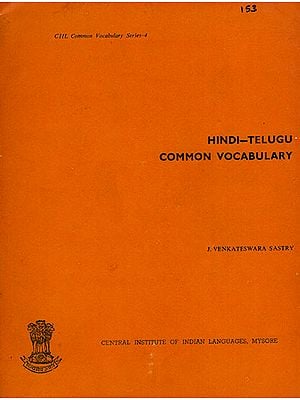 $20.00
Notify me when this item is available
Save to Wishlist Send as E-card Share by Email
Foreword

The Central Institute of Indian Languages was set up on the 17th July, 1969 with a view to assisting and co-ordinating the development of Indian Languages. The Institute was charged with the responsibility of serving as a nucleus to bring together all the research and literary out-put from the various linguistic streams to acommon head and narrowing the gap between basic research and developmental research in the fields of languages and linguistics in India.

The Institute and its four regional centres are thus engaged in research and teaching which lends to the publication of a wide-ranging variety of materials. Materials designed for teaching/ learning at different levels and suited to specific needs is one of the major areas of interest in its series of publications. Basic research relating to the acquisition of language and study of language in its manifold psycho-social relations constitute another broad range of its interest.

These materials will include materials produced by the members of the staff of the Central Institute of Indian Languages and its Regional Language Centres and associated scholars from Universities and Institutions both Indian and Foreign.

The Central Institute of Indian Languages has initiated the Common Vocabulary series in Indian Languages with a view to presenting the range of commonness among the vocabularies of the major languages and thus help evolving a core vocabulary.

The study of vocabulary is a major component in the teaching/learning of a language. Not much scientific work has been done on the vocabulary of Indian languages. On the contrary, vocabularies are considered as the quickest way to business success and one finds that in most of the so-called quick and easy language learning manuals there are nothing but lists of voca bulary organized on an adhoc basis. It is wrong to assume that by merely learning a number of vocabulary items one could either speak, read or write a language. Yet in the absence of any other scientifically treated material such lists gain currency even among language teaching institutions.

A lot more.work has been done in English producing lists of words for different levels and for specific uses in comparison with the Indian languages. Lorge’s semantic count of 570 words, Thorndike’s second 500 words, and West’s General Service List(s) of 2,000 words are meant for secondary school work. Rejall, Ayres and Flood & West have provided lists of vocabularies which are useful aids to the fields of science, business, education and other areas. In India such lists are adopted for the teaching of English. The CIE has prepared lists of words for Science and Humanities and the study group appointed by Government of India presided over by Prof- V. K. Gokak also gives active and passive vocabularies of 2,500 and 2,000 words respectively meant for ‘Higher Level’. Like Thorndike and Lorge’s, The Teacher’s Word Book of 30.000 words, no material exists in indian Languages and even if something of that dimension was attempted it would not meet the immediate specific practical demands of text book writers and such other persons who are obliged to work within a controlled vocabulary.

Among the Indian languages phonemic and morphemic frequencies have been worked out for Hindi, Gujarati, Marathi, Oriya, Kannada and Malayalam, the last three yet to ‘be publi shed. These studies list the frequency of phonemes, morphemes and words in a running list of one lakh items randomly selected from all levels of written literature. Although these studies are particularly useful for divising speed writing, typewriter key boards, etc., from the point of view of teaching and learning they are of limited use. For instance given the information that the frequency of ‘lie’ is 1,227 and that of 4m is 5, how is one to interpret this? Similarly, given that ‘laga’ is 106 and ‘lagata’ is 1, one is faced with parallel problems of interpretation. Do they lie within the commonest range of vocabulary items? If not, is their teaching to be phased in such a manner that low frequency items like ‘gm’ and ‘laga&ta’ should be postponed until such time their turn comes?

This brings us to the question of computing frequencies on the basis of written as opposed to spoken material. Spoken material is difficult to collect, but it has its own use. For example, a word like ‘64m’ will probably have high frequency in spoken Hindi and any one wishing. productive competence in the language will need it. Similarly, the Thorndike team working for. about 20 years may have found ‘chicken’ to be of high frequency, but not ‘hen’ on the basis of usage. Compounds like ‘roast chicken’, ‘fried chicken’, ‘chicken sandwich’ etc., naturally estab lish a higher frequency for chicken over hen. Yet ‘hen’ may be of greater importance for a text on poultry. Thus, the importance of the distinction between list frequency and text frequ ency has also to be kept in view by the language teacher and the material producer.

In Hindi four books deserve special mention. One is ‘Hindi ki adharbhat sabdavali’ prepa red by the Central Hindi Institute, Agra. The second is a frequency count by K. C. Bhatia and the 3rd and 4th are the ‘Basic Hindi Vocabulary’ 2,000 words and 500 words published by the Ministry of Education, Government of India. Different methodological procedures had been followed in each case keeping in view the frequency of uses and some kind of a vague gene rality of concepts. None of these could completely meet the demands for Hindi and could effe ctively be used as a model for any other Indian language.

To meet the immediate needs of people engaged in the teaching of Indian language and production of material for the purpose, the Central Institute of Indian Languages had initiated two programmes. The first one is to prepare lists of recall vocabulury of approximately 3,500 words. 45 semanticj;categories were given,to educated native speakers of Indian language who were asked to recall from their memory vocabulary items connected with those semantic catego ries, The categories were compiled so as to include items related to familiar objects and day to-day experiences. No dictionary or written record was used for collecting this material. Once this material was available attempts were made to compare the recall vocabulary lists of cog nate languages. In comparing the lists of Telugu, Tamil, Kannada and Malayalam, it was felt that a more useful purpose would be served by indicating the vocabulary common among these language, and so a numerical grid was prepared to indicate vocabulary items common among the four languages, three languages and two languages. It is expected that such comparisons will be made among other sub groups also.

The second project is to prepare common vocabulary between Hindi and any other Indian language. It was decided to prepare such common vocabularies with Hindi as the base language for all Indian languages. For this purpose the authors were given freedom to use dictionaries, glossaries and all sources of written literature including periodicals. These are classified to include same words with same meaning and same words with different meaning with further sub-classification to include same word, same shape, same meaning, same word, different shape, same meaning; same words with entirely different meaning, same word with expanded meaning and same word with restricted meaning. It is hoped that eventually these would lead us to a common core vocabulary among all the Indian languages. Once these are prepared, it would facilitate the work of teachers and material producers who would have a certain base for buil ding teaching material for the new learners. This would further emphasise the cultural misce genation that has taken place over the past thousand years leading to a common cultural and linguistic heritage.

I hope that all people working in the field of Indian languages would find these lists useful. 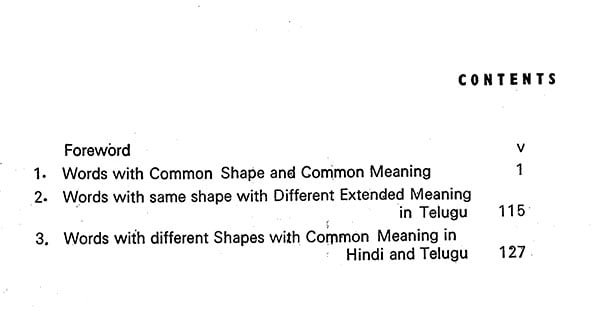 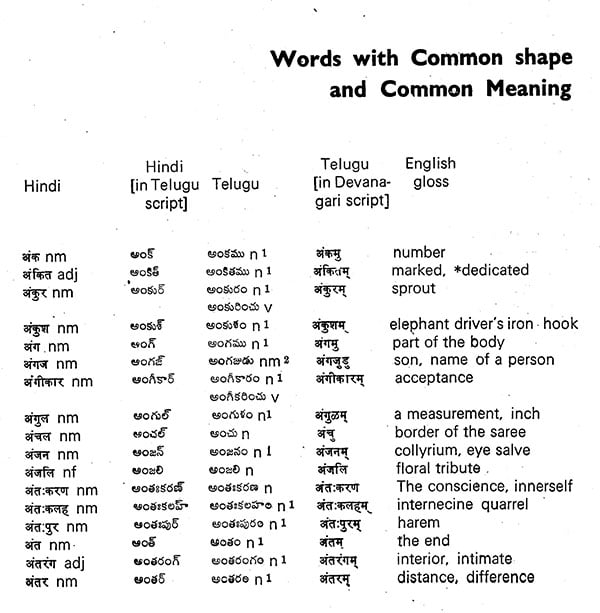 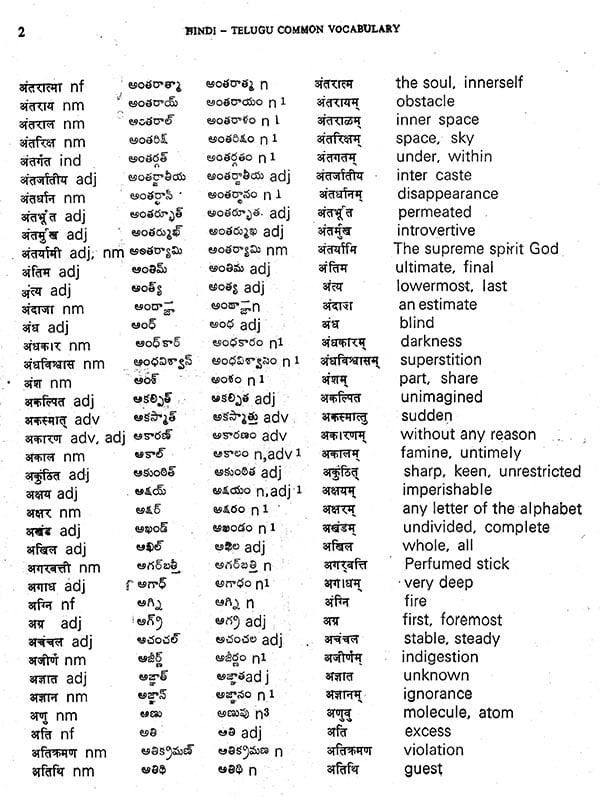 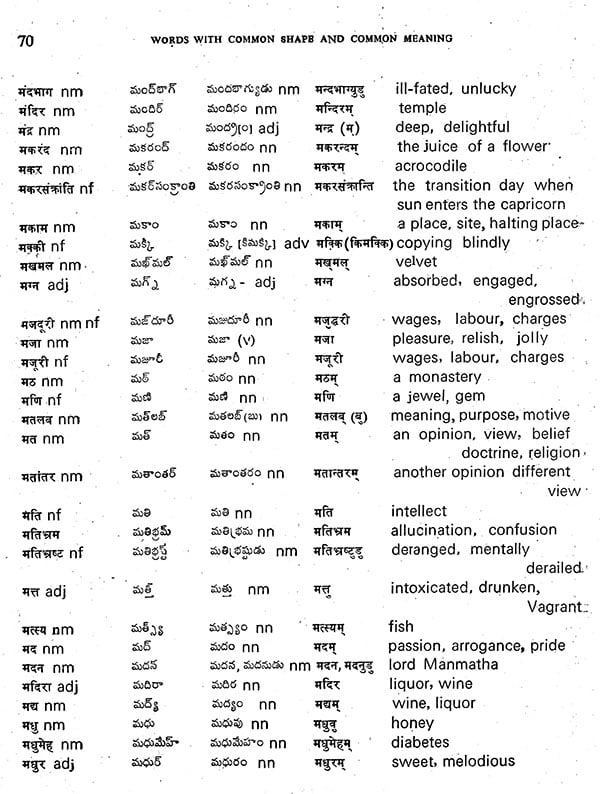 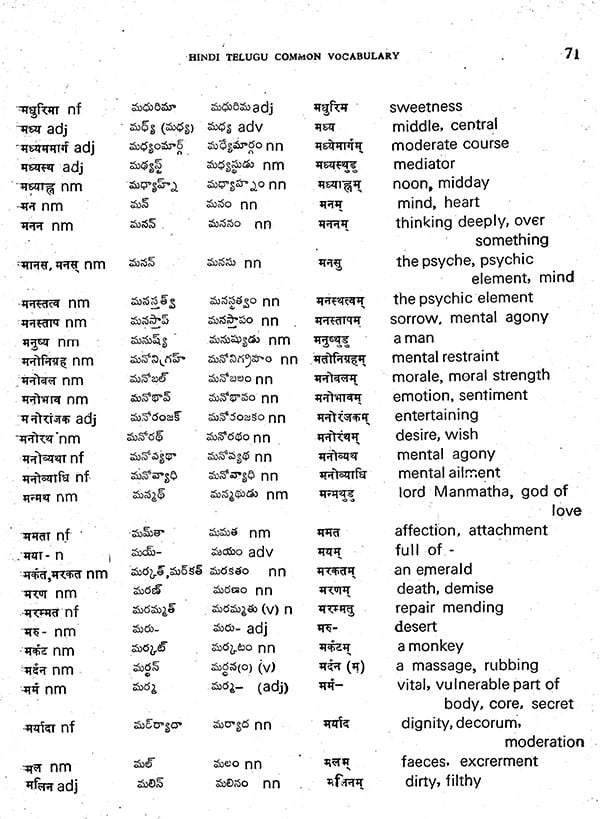 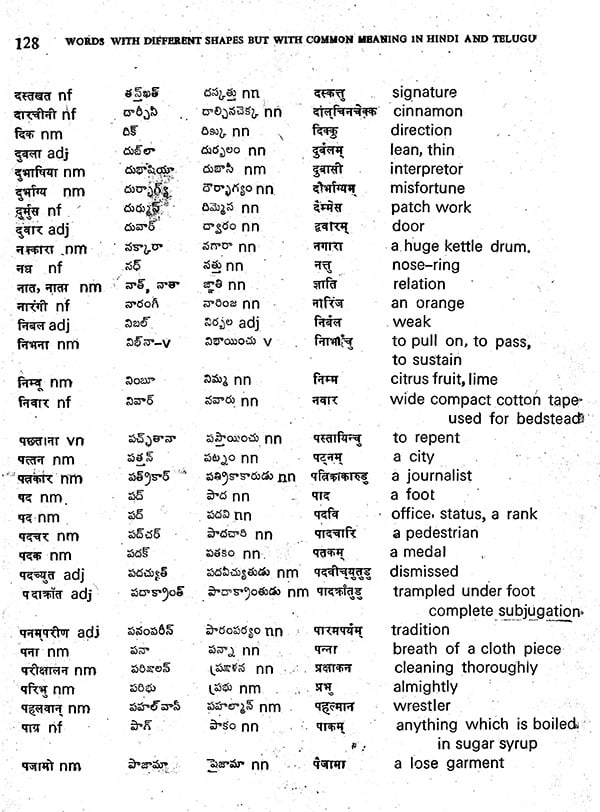 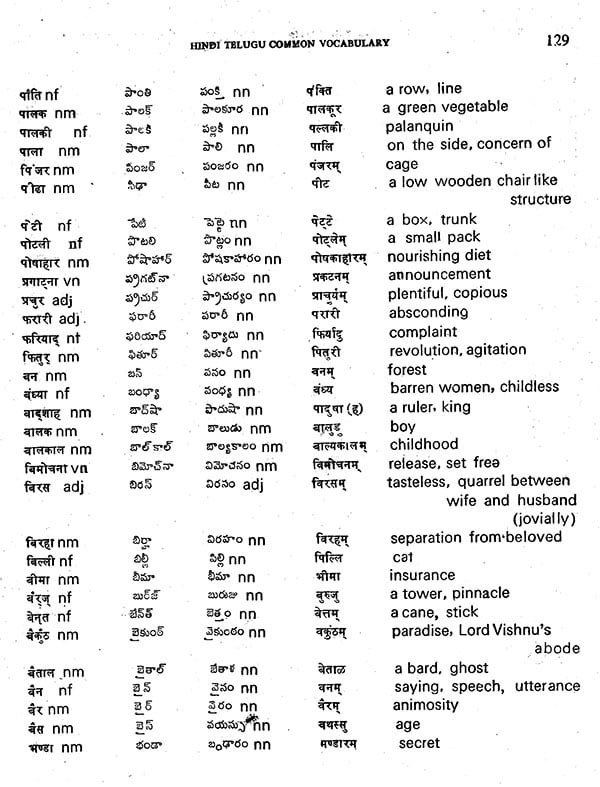