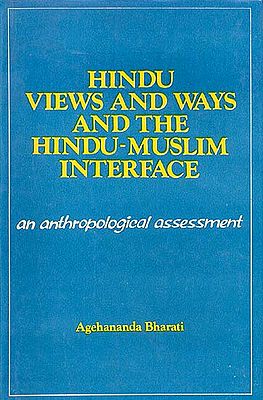 $9.00
Notify me when this item is available
Save to Wishlist Send as E-card Share by Email

This book is the closest to a modern, critical, interdisciplinary answer to the oft-asked question "what is Hinduism?" The author does not claim to answer this question which he does not claim to answer this question which he does not think can be answered unequivocally. Yet in this terse, succinct presentation something close to such answer has been attempted. The author analyzes both Hindu thought and Hindu behavior as he approaches Hinduism both textually and contextually, as an Indologist and a cultural anthropologist. He present the average rural and urban Hindu views of the tradition rather than that of an intellectual or sacerdotal elite, and he introduces work-a-day people's way of acting as Hindu rather than the rituals or the meditations of highly tutored specialists, of the woman and the man in the field or in the office rather than of the purohita or shastri in the Vishvanath or Meenakshi temples. Bharati also clarifies a number of confusions which have become part of modernized Hindu' notions about ritual, caste, 'superstition' and other themes which the Hindu Renaissance of the last ten decades has generated.

In order to illuminate the links between popular and learned Hinduism which includes a powerful esoteric segment, the author explains the perennially mystifying problem of bhakti vs. jnana, pivotally exemplified by Adisamkaracarya to whose order the author also belongs. When the late Pt. Nehru insisted that India's was a composite rather than a Hindu culture, he put his finger on an important fact: than once cannot sensibly and sensitively talk about Hindu action without heeding the interface between Hinduism and Islam which has indeed become part of modern Hinduism, as it is indeed for South Asian Islam.

Agehananda Bharti, a native of Vienna, Austria, now U.S. citizen, is a monk in the Dasanami Sannyasi Order of Samkaracarya and professor of anthropology at Syracuse University, U.S.A. He was Reader in Philosophy at Banaras Hindu University from 1951-54, Visiting Professor of Indian Religions at the Mahamukuta Royal Buddhist Academy in Bangkok and at the University of Tokyo and Kyoto in 1955 and 1956, Research Associate at the Far Eastern Institute of the University of Washington in Seattle from 1957 to 1961, and has been on the faculty of Syracuse University in the State of New York since 1961, where he served as departmental head from 1970-1977. He is a Fellow of the Royal Anthropological Society of Great Britain, a fellow of the American Anthropological Association, member of the Association for Asian Studies and the American Oriental Society. Among his close to five-hundred publications in various languages and on four continents, some of the most important are his autobiography. The Ochre Robe '( latest edition Ross-Erikson, Santa Barbara, Cal., USA, 1980), The Tantric Tradition ( London, 1969, New York, 1970 and 1975), Asians in East Africa: Jayhind and Uhuru (Nelson Hall Publ., Chicago, 1972), The Light at the Centre: Context and Pretext of Modern Mysticism (Ross Erikson, Santa Barbara, 1976 and Vikas, Delhi, 1977): and the entry on Monasticism in the new Encyclopedia Britannica (Vol. XII, 1974).

Vedic Vision of Consciousness and Reality
By D.P. Chattopadhyaya and Satya Prakash Singh
$75.00