£50.25
Notify me when this item is available
Save to Wishlist Send as E-card Share by Email
Introduction

The Origin of this iconographic dictionary of the Indian religions stems from the lack of a work of reference easy of across and dealing with Indian iconographic terminology it is intended primarily for readers who are interested in Indian iconography and the history of art and religion but who are not trained in Sanskrit and other Indian languages. Since however much information concerning the iconographic details of the different deities is available albeit in a piecemeal manner experts may also find it useful.

The nearest equivalents among reference works such as Downson’s A classical dictionary of Hind Mythology and religion geography history and literature Garrett’s a classical dictionary of India Moeller’s Die Mythologie der Vedischen Religion und des Hinduisms (Edited in Worterbuch der Mythologie) are primarily concerned with the history of religion an deal only in a lesser degree with the iconography of the deities described. The same Vedic Index of names and subjects. It might’s therefore be valuable to give brief and perspicuous form of a dictionary on the one hand an account of the iconographic terms their significance and the deities to which they relate and on the other a brief description of these deities with regard particularly to their iconographic characteristics.

This dictionary has been compiled from a selection of iconographic handbooks and from the literature of the history of art and religion. So as not to distort the balance of available space particular descriptions of individual deities have not been given undue emphasis. Within this compass however as complete as possible a notation of the purely iconographic terminology has been aimed at but I am not drawn upon. At the same time it seemed to me to some extent useful to give brief explanations often mere translations of those terms concerning rites religious festivals, architecture chronology etc which are often met with in iconographic literature philosophical and abstract terms are only exceptionally included.

As is clear from the title of this dictionary it concerns the purely Indian religions and as regards its sphere of reference since Hinduism has spread to indo china and Indonesia and Buddhism has been carried to the whole of eastern Asia the line has been drawn at Sri Lanka and Indonesia indo-china and the forms of Buddhism to be found to the east having been excluded the Tibetan form of Buddhism in its chief outlines has however been included owing to its close connection to Buddhism of North India it symbolism and religions terminology being to a great extent dependant on Indian symbolism.

The iconographic terminology is drawn especially from Sanskrit but partially also from Pali and New Indian languages. In south India there is a rich terminology in Dravidian which besides may be met with in a Tamilized form it was necessary therefore to select only those terms of most general interest and those which within the compass of the literature excerpted are found together with Sanskrit terms.

In the iconographic handbooks the chief interest of the authors is directed towards the description of the deities and their different attributes and the purely iconographic terminology is therefore as already been said above dealt with too summarily. Terms are often used without any translation or explanation terms in Sanskrit or in other Indian languages are used side by side with terms translated into European languages. The transliteration of Indian words is often unscholarly and inconsistent words which should be printed with diacritical marks are given without any such marks and are therefore sometimes indistinguishable to those who are not well versed in Sanskrit if e.g. Kali and Kali, the reader of two wholly different deities are both rendered in print as Kali this may confuse the reader and if abhanga is given in the form abhanga as it is usually met with it might be wrongly interpreted as not bend also the difference between mala and mala. In this dictionary I have therefore sought to give a scientific transliteration of the terms in the main headwords but many reference to these main headwords are given in the divergent spellings to be found in iconographic literature.

It has not been possible to maintain strict consistency in the citing of the names of gods and the iconographic terms. All words the stems of which end in a vowel such as Siva Visnu, Agni, Sara, are of course given in their stem forms and all iconographers have stuck to this rule. Where the stem ends in a consonant scholars have followed different rules Brahma for example is much more often cited in its nominative form than in its stem form Brahma and besides the nominative form Hanuman this name is to be found though rarely either in its strong stem form Hanumant form Hanuman this name is to be found while on the other hand the stem form arhat is more frequently used then a the nominative form arhan. The difficulty here was in accustomed to finding a name is a certain form might be unfamiliar with another word form or on the other hand each name should be given in the word form which is best known. After some hesitation I chose the latter method and many writers on Indian iconography and history of religion have followed the same principle. The variant forms are however given in brackets and reference is made to the main headword from which the variant form derives if this according to the lexical alphabetical order is placed at some distance form the main headword. 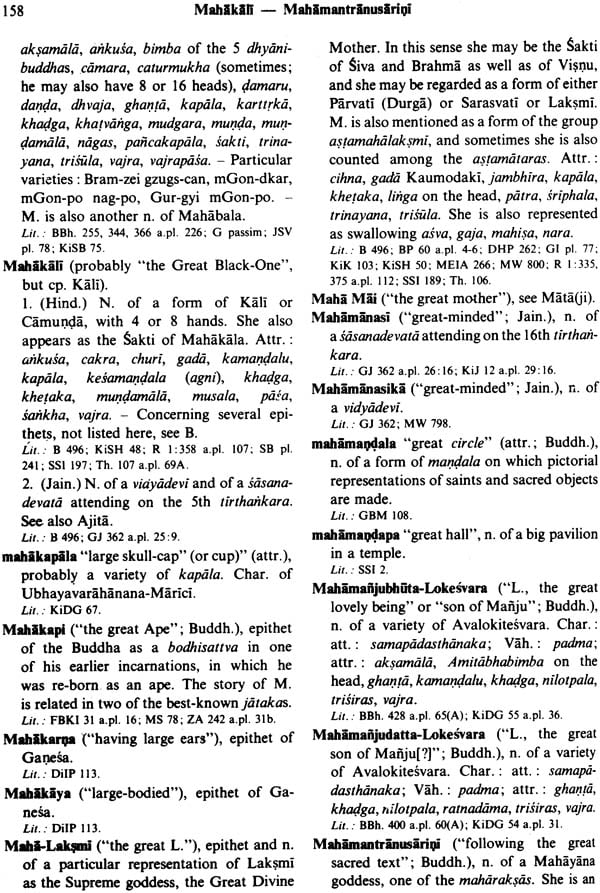 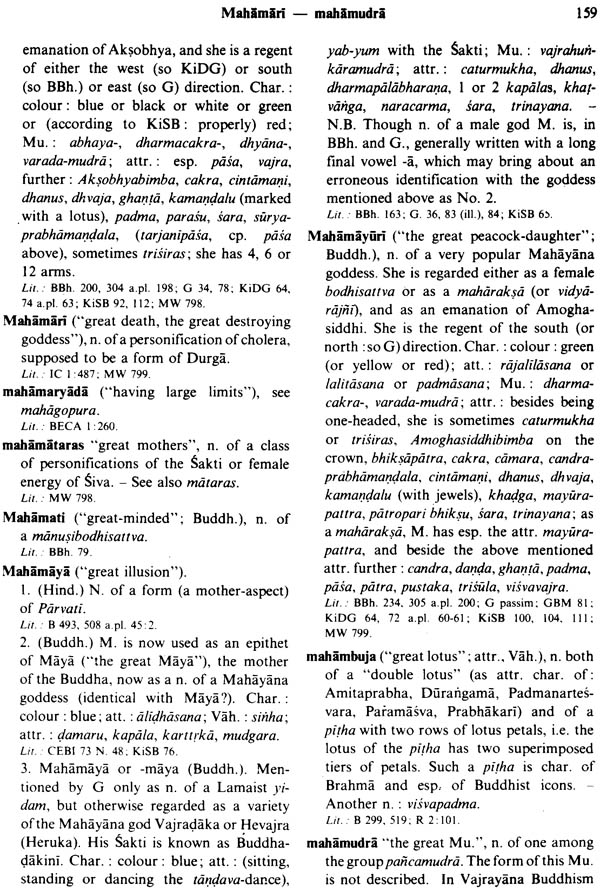 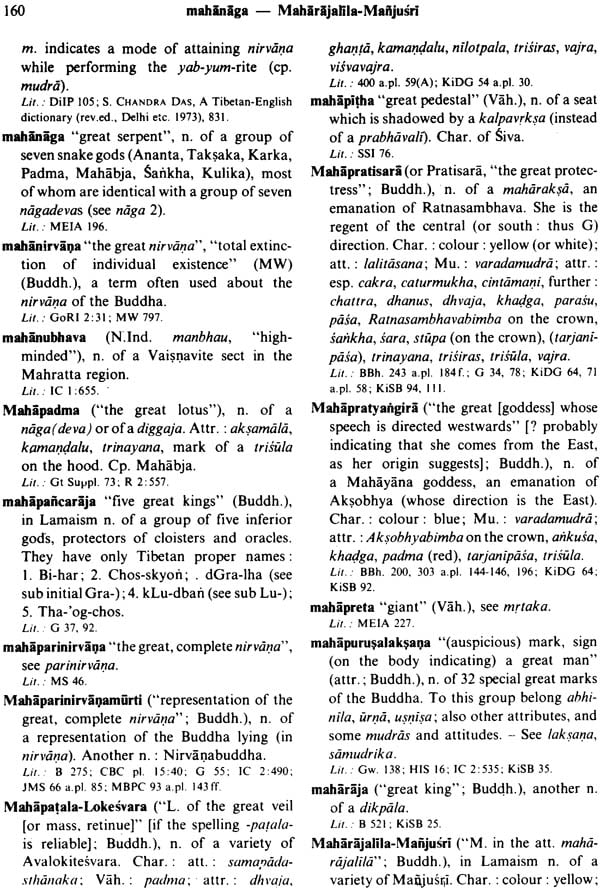 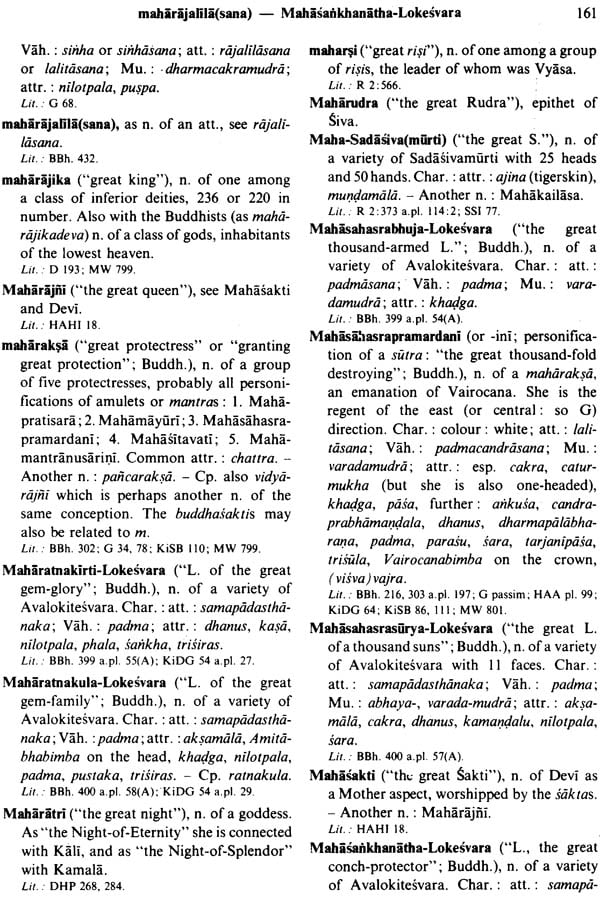 A Dictionary of Buddhist and Hindu Iconography - Illustrated
By Fredrick W. Bunce
£108.75

A Dictionary of Buddhist and Hindu Iconography - Illustrated
By Fredrick W. Bunce
£108.75