In A Forest, A Deer (Stories by Ambai) 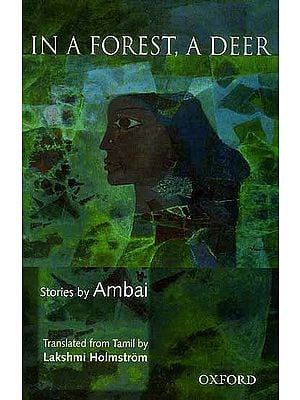 Ambai's intricate stories constantly reinvent the short story form, teasing and delighting the reader. They interweave lives, juxtapose the past and the present, the mythical and the contemporary, articulating the real experience of women and communicating their silences in words and images. A mix of narrative forms-letters, dispatched, journals, emails, memos and articles-adds variety.

The stories, located in Tamil Nadu and Mumbai, in Europe as well as the United States, touch upon themes of displacement, exile, and identity; the way people describe themselves and the communities to which they choose to belong. In 'Journey 2', Dinakaran defines himself narrowly as a person from Tirunelveli, who can only face the day after his bath in the river. The narrator of 'A Rose-coloured Sari' wonders about her individual self, in contrast to the artificial 'Indianness', which she sees in the Festival of India abroad.

These translations, profoundly relevant to today's world, will appeal to students and scholars of regional Indian literature, as well as general readers.

Ambai is a historian, creative writer, and postcolonial feminist who writes about love, relationships, quests, and journeys in the Tamil region and elsewhere. She has three collections o short stories in Tamil; three non-fictional research-based works in English; and a fourth, an anthology edited by her. Among the most original of modern Tamil writers, she is rooted in the literature and modern culture of Tamil Nadu.

Lakshmi Holmstrom, the translator, studied at Madras and Oxford Universities. She has translated Tamil short stories and novels by renowned modern writers such as Sundara Ramaswamy, Asoka Mitran, Imayam, and Bama. Her translation of Bama's Karukku won the Crossword Book Award 2000, and her translation of Sangati was shortlisted for the same award in 2005.

The stories in this collection were written over the last ten-year, for many different journals in Tamil. They were not written in a hurry for there was no deadline to meet. Had they not been written, no one would have missed them except, perhaps, for a group of friends. One writes because the act of writing has become as close to one as breathing. It is difficult to stop.

It is a strange feeling confronting a translation of one's stories. The characters seem different; the images are sketched differently; the colours are not what one imagined and the words sound different. And then as one slowly gets into the mood of the translated language, one sees one's stories bound in a certain way and take wings, traversing the distance between the two languages. This magic of a story taking shape in another language can happen only if, life pushing a fishing boat into the sea, a translation gently nudges a story into the vast ocean of another language. My friend Lakshmi Holmstrom has that gentle touch. After my stories come back to me from her, there is a moment of non-recognition, but that is soon transformed into the magical experience of my stories becoming my won. For letting me experience this magic time and again I thank Lakshmi. And for making this translated version appear in print I thank Mini Krishnan and Oxford University Press.

A Clutch of Indian Masterpieces (Extraordinary Short Stories from the 19th Century to the Present)
By David Davidar
$36.00
FREE Delivery

A Clutch of Indian Masterpieces (Extraordinary Short Stories from the 19th Century to the Present)
By David Davidar
$36.00
FREE Delivery