India's Historic Battles: From Alexander the Great to Kargil 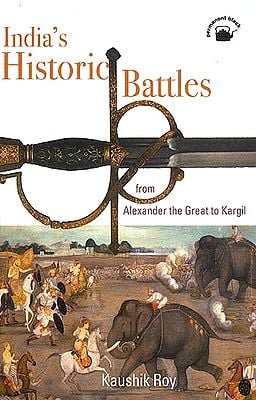 $33.50
Notify me when this item is available
From the Jacket:

Face powder came into common use through French soldiers who wanted to hide their scars, and baggy trousers were first used by American paratroopers in the Second World War. Everyday life, as well as the destinies of vast populations, are decisively affected by warfare.

Battles are central of warfare. This book describes twelve great battles which changed the course of India's history. The book takes recent researches into technology, military theory and demography into account; the author also moves freely across space and time in his analyses. Could Paurava and Alexander's clash on the Jhelum in 326 BC have anything in common with the Normandy landings of June 1944? Do events in 1557, when Hemu was fighting the Mughals, remind us of the Siege of Leningrad in 1943? Was the Japanese response to Netaji's INA affected by the presence of Chiang Kai Sheik?

Each chapter analyses the weapons, leadership, strategy, soldiers' experience of battles, and much else. Alternative scenarios are outlined to ask if the outcome could have differed if other tacties were used.

A detailed bibliographical essay provides a starting point for those interested in pursuing battles beyond this book.

Kaushik Roy, who specializes in the military history of India, is a Junior Fellow at the Center fro Contemporary Studies, Nehru Memorial Museum and Library, New Delhi. His articles have been published in journals like War in History, and Journal of Military History. He is the author of From Hydaspes to Kargil: A History of Warfare in India.