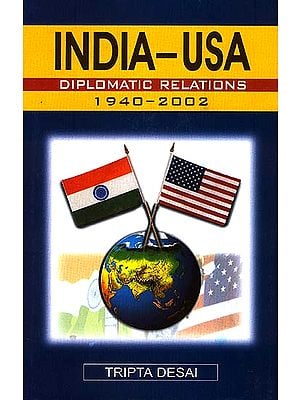 This is a very important and a well-researched book exploring the USA policy toward India since 1940s when Indian was seriously involved in gaining independence from the British rule. The Cold War between the Society Union and the USA after the end of the Second World War and Indian Independence in 1947 opened a new chapter in the USA-India relations as the USA was seeking military alliances with Asian countries to stop the expansion of Communism in that part of the world. India's non-alignment policy as expounded by Mr. Nehru did not sit well with the USA congress. India's request for two million tons of foodgrains from USA in 1950 to help support India's ration system met with a stiff debate in the American Congress. Finally, better judgement prevailed and the USA Congress did grant the loan. This huge controversy is the subject matter of the first chapter. Next chapter goes into a detailed discussion of the Kashmir issue which further strained relations between the two countries as the USA supported the Pakistan demand for a plebiscite in Kashmir in the United Nations. Other world issues such as Vietnam, Bangladesh are discussed where the USA and India tended to disagree sharply. Soviet Union became a big ally of India in the United Nations while USA supported Pakistan.

However, the September 2001 destruction of the world Trade Center by Al-Qaida terrorists has brought about a big change in the USA policy towards India's challenging task of dealing with the terrorists in India's Kashmir who, India alleges, are being trained in Pakistan and Afghanistan. The book also goes into the military common endeavours between the two countries since September 2001.

Dr. Tripta Desai has been teaching at Northern Kentucky University since 1970. She has taught a wide variety of courses ranging from Japan to the USA. She is the author of Women in India; the East India Company; and The Cold War From 1945-74. Her present book, India USA Diplomatic Relations, 1940-2002 is an extension of her another book on India USA relations. Dr. Desai's course on Modernization in the Third World is very popular with the University students as they get instructions from a person raised in India. She has presented a number of papers on Women in India and on various aspects of India-USA diplomatic relations.