Indira Gandhi (The Story of A Leader)

Miss Chopra finished reading these lines from Jawaharlal Nehru’s book, The Discovery of India. As she looked around the class a girl in the front row excitedly raised her hand. “I have heard my grandmother say the same thing. She remembers her mother often telling her about the huge public rallies she used to attend where women even from nearby villages could be seen shouting slogans against the British.” Miss Chopra nodded in agreement. “That’s right,” she said. “Women of that generation were passionately involved in the independence movement. It brought them out of their homes into public life. In fact when Gandhi made his famous call to Indian women to become politically active they responded enthusiastically.”

“Well, girls, the next weeks we are going to work on a project,” continued Miss Chopra. The entire class groaned inwardly at the thought of spending hours over dusty library books or piles of newspapers, reading about some obscure topic. But Miss Chopra’s mind was already made up. She was a firm believer in project work which she thought, taught her students together information beyond that given in their textbooks, and Nehru’s lines suddenly suggested to her the subject of her protect “The Women of India’.

“The Position of women in the family and in society has changed in the last 200 years. With the spread of education many new opportunities have opened up in different areas like medicine, law, business management teaching, the media and ofcourse, the ever popular computer sciences.” Miss Chopra then went on to say how better off women had failed to march in step with those better off among had failed to march in step with those better of better off among the upper and middle classes. “Obviously there is much to be done, particulary in villages, and I want you to think about the many problems women have to face all over India. As daughters, wives mothers and professional show do we see ourselves today and what are our dreams for tomarrow.

Miss Chopra paused. Her class of teenagers was beginning to get interested. Perhaps, a project on women did have an appeal after all.

A hand shot up, “can we not talk just about Indian women in general but also the more famous among them? “Why not,” said Miss Chopra encouragingly, “I want each one of you to write about the woman you admire most. Well, it could be someone well-known, a woman blessed with great talent, adored by millions; she might even be somebody not in the limelight but with distinct leadership qualities and a will to succeed against tremendous odds. You could choose from amongst queens and politicians, writers and poets, actresses and dancers, scientist and sportswomen. Let me see what you can come up with.” There were eager responses. “Rani of Jhansi,” suggested somebody. “Lata Mangeshkar,” said another girl. “Shabana Azmi”, “Meena Kumari”, “P.T.Usha”, “Medha Patkar”, “Aishwarya Rai”, “Razia sultan” came a chorus of replies.

Miss Chopra smiled, “this promises to be very interesting,” she said. “So let me begin with you priya. Who would you like to write about? Priya thought for a moment. She wanted to choose a modern personality-a woman of the times. Somebody who may have passed away but whose presence could still be felt, who lived on in people’s memories and was the subject of their discussions and arguments.

Then she remembered the book that her grandfather had given her recently-‘Glimpses of World History’. It was a series of about 200 letters written from prison by Jawaharlal Nehru to his young daughter Indira. Through them he presented the vast panorama of world history and the people who had shaped it. Priya had begun reading the book. Her interest in Indira Gandhi had been aroused by a conversation between her parents and grand parents about the war in the winter of 1971, from which Bangladesh emerged as an independent country on the eastern border of India. 1971 was a long time ago and yet Indira Gandhi seemed a living figure spanning the generations not only of her grandparents but also her parents. 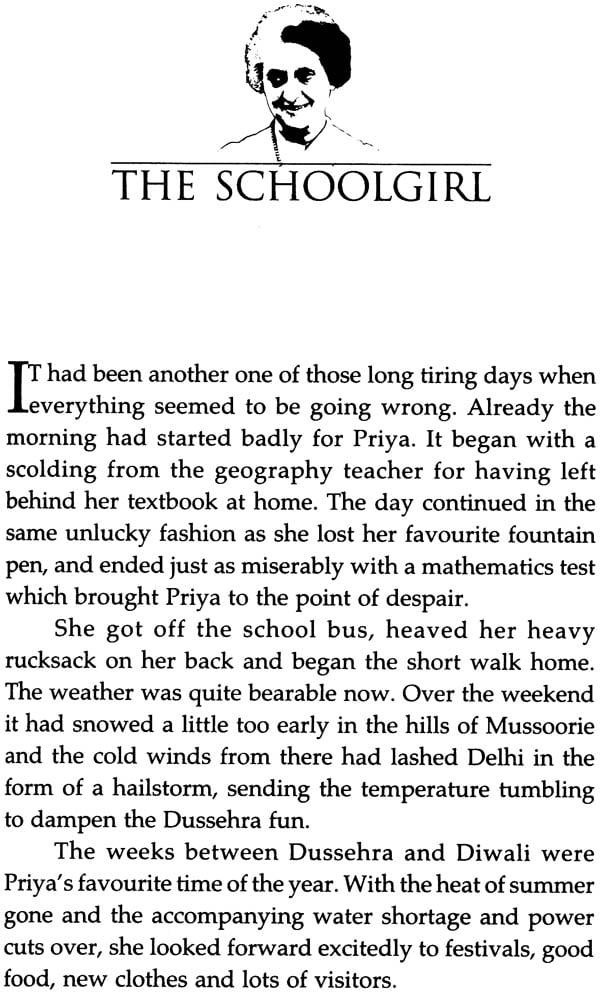 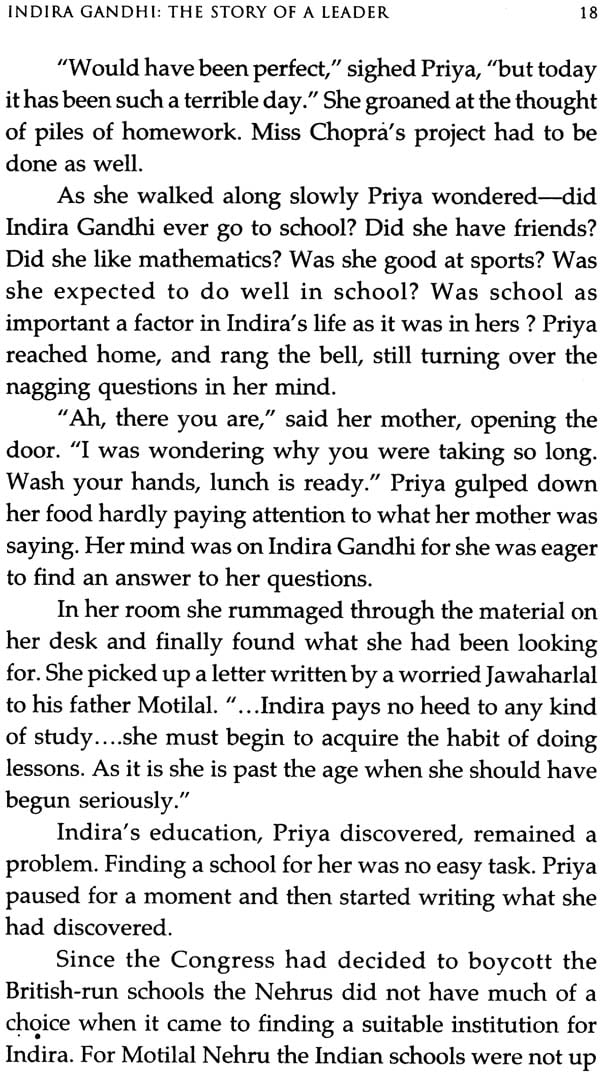 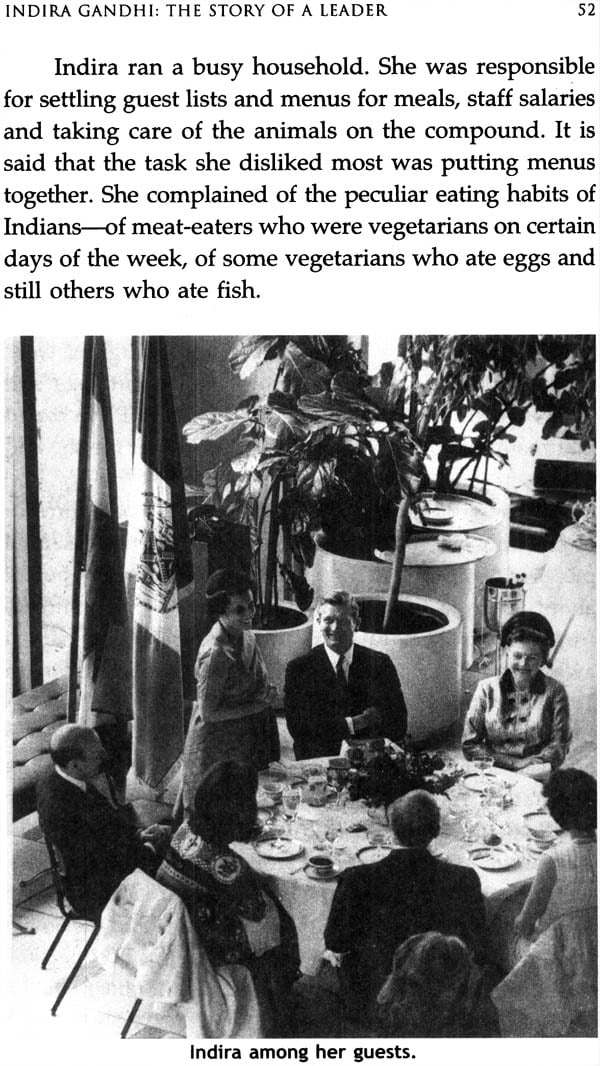 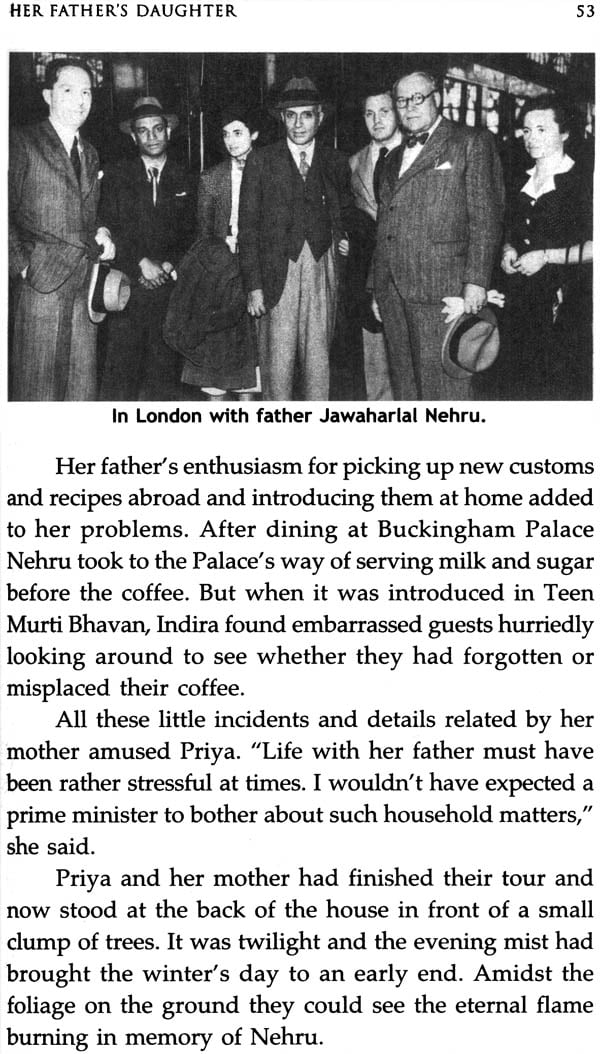 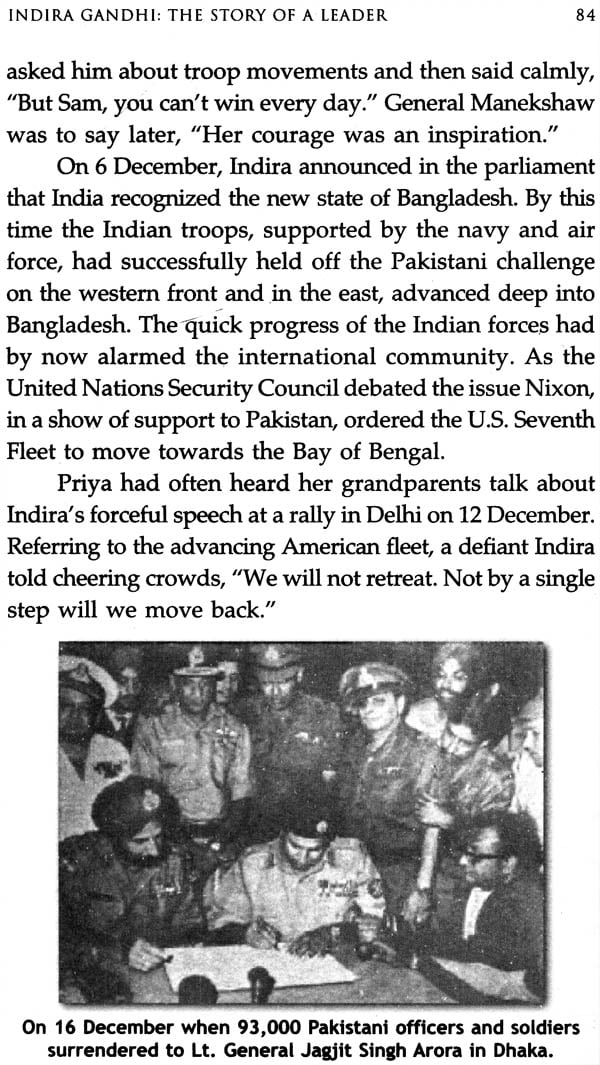 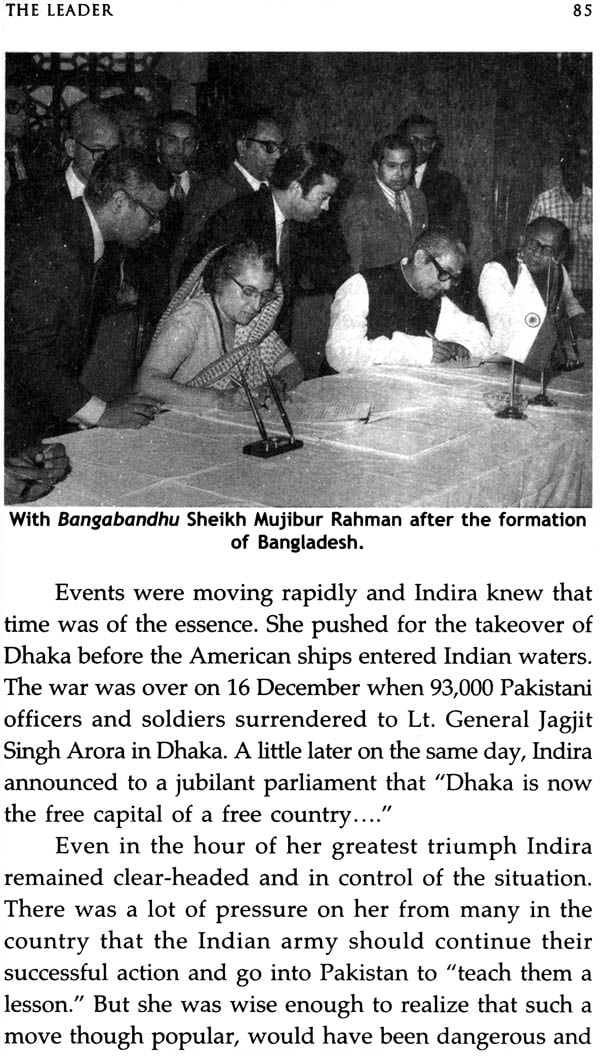 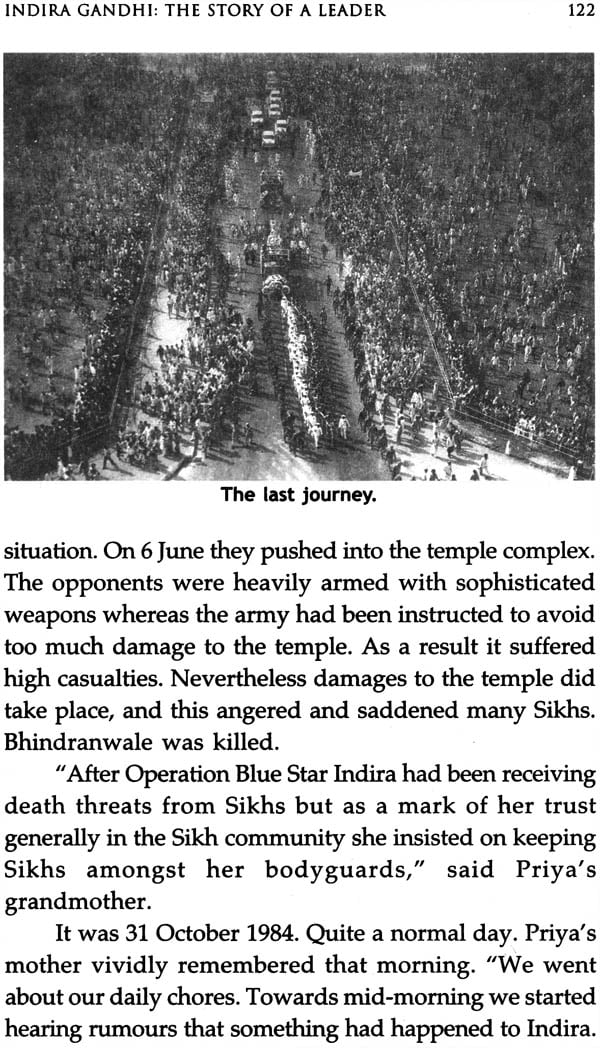 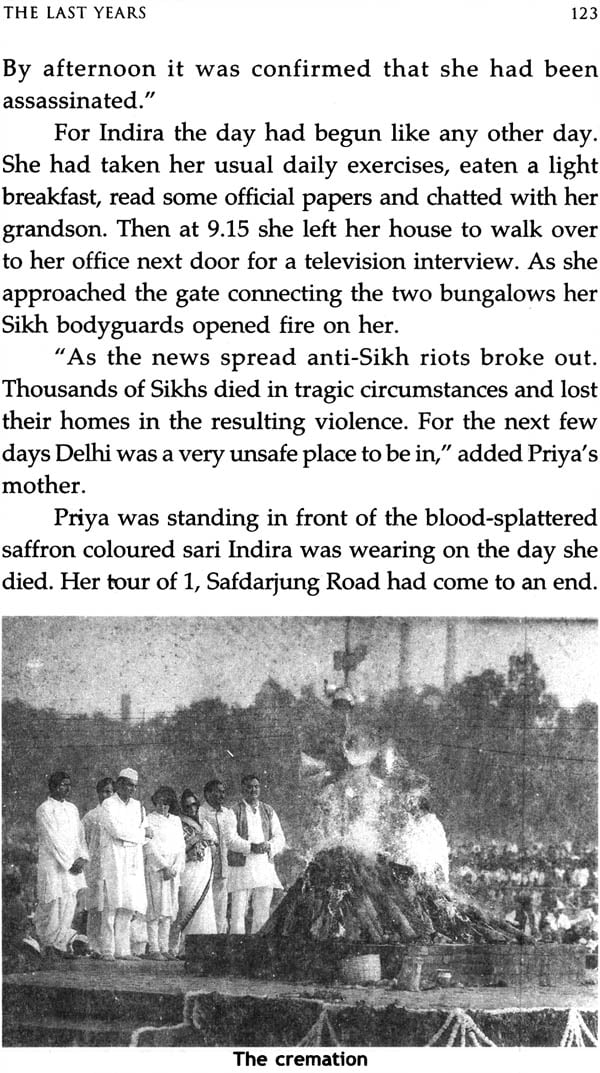 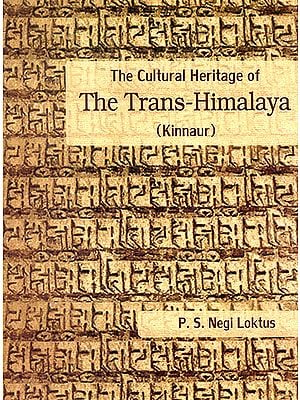