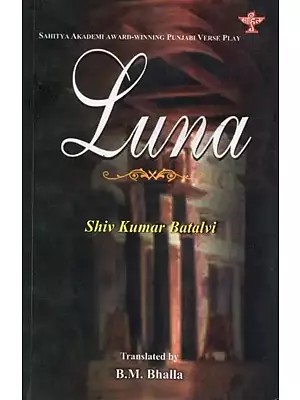 FREE Delivery
$22
Quantity
Ships in 1-3 days
Notify me when this item is available
About the Authors
Luna: An English translation of Shiv Kumar Batalvi's award-winning verse-play in Punjabi, based on the ancient legend of Puran Bhagat. The legend is part of the folk culture of Punjab and other states of North India. In medieval times, Qadir Yar, a Muslim Sandhu Jatt, and Punjabi poet, wrote Punjabi Qissas, and Qissa Purana Bhagat is a part of them. Shiv Kumar's recreation of Qissa Purana Bhagat as Luna is a realistic and powerful assertion of Dalit and feminine viewpoints in today's modern era.

Shiv Kumar Batalvi (1937-1973) was a major modern Punjabi poet. His first selection of poems Peeran Da Paraga (1960) established him as a significant romantic voice in Punjabi literature. His verse-play Luna won the Sahitya Akademi Award in 1965 and has already attained the status of a mini-classic in Punjabi.

B.M. Bhalla the translator, was a teacher of English literature and academic administrator at the University of Delhi. Prof. Bhalla has done critical work on D.H. Lawrence, American novel, drama and Indian literature in English. He has translated Betty Smith's novel Joy in the Morning into Urdu, P.C. Chunder's Bengali novel Azdaha and a number of Hindi short stories into English. He has also recreated Punjabi love legends in English.

Introduction
Nothing definite can be said about the content and structure of the epic. Homer, Dante and Milton chose their subject matter according to their own worldviews. The epical modes of the Eastern epic was dependent on the then current, established and elitist notions. But the Greek and Western epical tradition was based on the human foibles of common men and women. This is why the western tradition is thought to be more earth-bound and realistic.

The life depicted in the Punjabi love-legends reflects the common life of common people of a particular age. But some story tellers and upholders of traditional values have tried to somehow show how these legends belong to a single cultural tradition. They have also sought to treat them as vehicles for didactic and moral teaching. But if we take an unbiased view the Greek influence seems quite evident.

Puran's love story is perhaps the most popular among the Punjabi people. Its theme is not new. The story of the second queen of Ashoka the Great, who fell in love with his son, and which resulted in the loss of hands and feet of the young man is well-known. The tale of Tunde Asraj is very similar to Puran's story. Though an old version of Puran's story is not available anywhere in any Hindu religious text, yet its elements are woven in the texture of Punjabi folk-songs. The extended version of the same description is available in Kadaryar's "Puran Bhagat" and "Kallian Puran Bhagat". 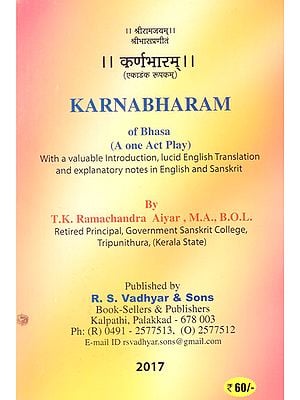 कर्णभारम् - Karnabharam of Bhasa- A One Act Play (With a Valuable Introduction, Lucid English Translation And Explanatory Notes in English and Sanskrit)
By T.K. Ramachandra Aiyar
$16 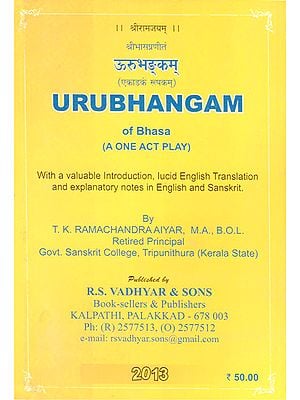 ऊरूभङ्कम् - Urubhangam of Bhasa- A One Act Play (With a Valuable Introduction, Lucid English Translation and Explanatory Notes in English and Sanskrit)
By T.K. Ramachandra Aiyar
$17 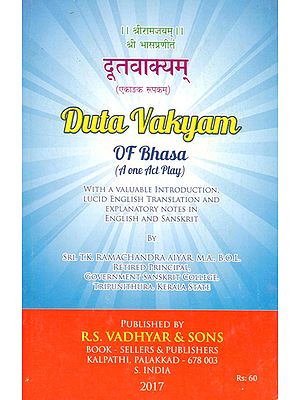 दूतवाक्यम् - Duta Vakyam of Bhasa- A One Act Play (With a Valuable Introduction, Lucid English Translation and Explanatory Notes in English and Sanskrit)
By T.K. Ramachandra Aiyar
$16 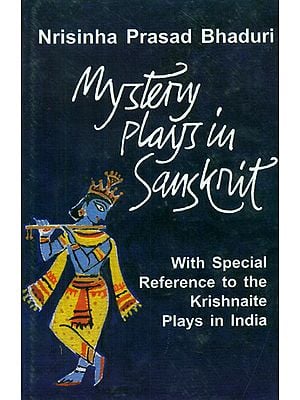