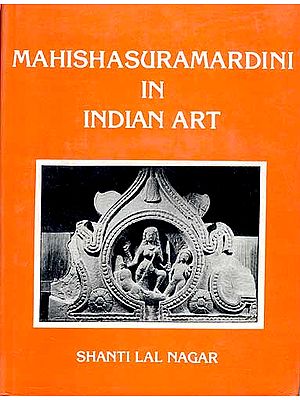 $35.00
Notify me when this item is available
Save to Wishlist Send as E-card Share by Email

The cult of Mahishasuramardini is of considerable antiquity. Its genesis could be traced from the vedic literature. The great Epic Mahabharatha and the Puranas have given varied but vivid accounts of not only the origin of the Goddess but also of the Mahishasura, besides her exploits. The author besides highlighting the descriptions of the Goddess as per Puranic texts, he also discussed in considerable length the emergence and representation of the Goddess in Indian plastic art through the ages. Her travels beyond the through the ages. Her travels beyond the Indian frontiers in the countries like Afghanistan, Sri-Lanka, Indonesia, Pakistan, Java, Bangladesh, Nepal and as far as Japan, have been vividly described in Sanskrit Literature and even Persian works. An attempt has also been made to bring out the historical aspects connected with the episode, in addition to highlighting the fabulous aspects. For the convenience of the reader, the work has been studded with seven appendices, containing basic information relating to the Tantric and other aspects of the Goddess.

The Publication has 82 Photographs, depicting the Goddess's presence in the entire length and breadth of the country form the dawn of Christian era to the 19th century A.D.

The author has been one time Curator of the Central Asian Antiquities Museum, Nalanda Museum and Indian Museum, Calcutta and has to his credit documentation of over 10,000 antiquities in the Nalanda Museum, and over 40,000 antiquities in the Indian Museum, Calcutta, besides being author of three publications with Archaeological Survey of India. He is also the author of another work "The Universal Mother",which is likely to come out shortly. His other works awaiting publications are "The Composite Deities in Indian Art," "Muslim Sanskrit-Scholars," which are nearing completion. He was also awarded the fellowship with Indian Council of Historical Research, on the project Temples of Himachal Pradesh - A Study".