The Making of Little Punjab in Canada: Patterns of Immigration 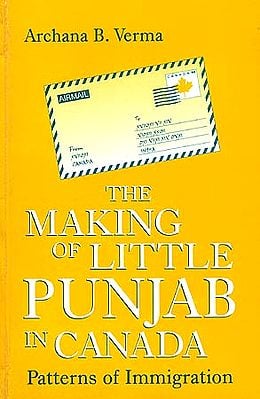 Concern about identity and ethnicity is growing in a world that is fast transforming itself into a 'global village'. This has fuelled the need for studies that explore and explain the historical factors and socio-cultural pressures that motivate international migration patterns. Archana Verma's powerful and vivid narrative focuses on a specific community in a particular time-frame, namely the Punjabi diaspora in twentieth century Canada. Departing from the usual conceptions of Punjabi migrants as submissive participants in Canada's industrial progress, as well as the conventional wisdom that Punjabi immigration was an offshoot of colonial deprivation, this book investigates their role as dynamic settlers.

The author concentrates on two localities - Paldi village in Punjab and the Punjabi settlement of Paldi in Vancouver Island, British Columbia. She traces the historical links and ethnic roots of these two village communities situated on opposite sides of the world. Dr. Verma depicts rural peasant migration in terms of the creation of social spaces at home and overseas. The book demonstrates that the reason Punjabi immigrants remain bound to their homeland revolved around familial and kinship ties and consideration of status. Caste alliances also server as a source of strength to face racist alienation in the receiving community and to strive for upward mobility in the sending community.

The sub-text of this book is revealing inquiry into the dynamics of caste, family and kinship networks and the resulting reciprocity influenced and gave rise to a process of circular mobility which was cyclical in nature. Her discussion of the family organization of land and of social status and how they are affected by the success of overseas emigrants provides substantial evidence for the flexibility of caste contours.

Coherently organized with equal emphasis on the native context as well as the overseas enterprise, the book concludes by discussing the social and economic effects of migration on both communities. The research methods used in this study break new ground by using primary sources extensively, combined with oral narratives, local archives, immigrant correspondence, and participant observation.

Overall, this book is a valuable contribution to the social and economic history of migrations between South Asia and North America during early twentieth century. Sociologists, anthropologists and historians, especially those working on Punjab, will find it on immense interest. This book will also cater to the increasing demand for insightful inquiries in migration and diaspora studies and on issues of identity among migrant communities.

Archana B. Verma is currently a Lecturer at Hindu College, University of Delhi. An archivally trained historian, she obtained her doctorate from the Simon Fraser University in Canada on a commonwealth Scholarship and has been teaching history in various colleges. She has written extensively on Punjabi immigration and has contributed articles to several journals and edited volumes besides having presented papers at several international and national seminars and workshops.