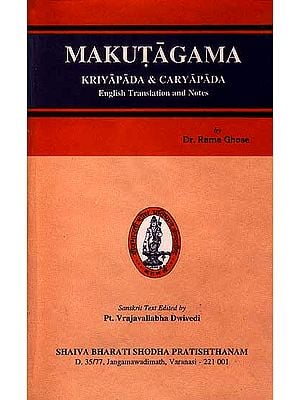 $22.50
Usually ships in 15 days
Notify me when this item is available
Save to Wishlist Send as E-card Share by Email
From The Jacket

Agamas and Vedas, never apart, rather complementary to each other, are the revelation by the Supreme for the welfare on mankind. Both are the sources and ground of all the philosophical doctrines and the religious life of Hinduism. They emphatically assert the truth that is inherent in the philosophical teaching, the mystic experiences of spiritual life and intensively advocate the ritualistic aspect of religious life, elaborately deal with the spiritual sanctions and regulations of the worships.

The present scripture, consisting of Kriyapada and Caryapada, is the later portion of the Makutagama, one of the eighteen Rudragamas among the twenty-eight Siddhantagamas including the other ten Saivagamas. Makutagama is considered to be the crown of all Agamas as it elaborately describes the Sambhavavrata, also known as Sirovrata, the Supreme among all the vratas to attain the end of life. A detailed illustration of the procedure of the last rite to be performed on the demise of the observer of Sambhavavrata has also been stated in the Caryapada of the scripture.

Dr. Rama Ghose, is a learned scholar of Saivism. She was awarded the esteemed Buch Prize for the best doctoral thesis in Philosophy in the year 1973 by Banaras Hindu university. She joined Arya Mahila Degree College, Varanasi, in the year 1969 and since then has devoted herself whole-heartedly for the persuit of knowledge in the field of Philosophy and religion. She has been studying all the source books and original scriptures of Agamas, especially Siddhantagamas.

She has also presented an authentic and critical interpretation of Tiruvarutpayan, a famous Tamil scripture of Saiva- Siddhanta which she could explain authoritatively because of her knowledge of Tamil language. This may be considered a rare distinction for a northern Indian scholar. She has faithfully and critically rendered into English two Agamas, namely Candrajnanagama and Makutagama; the detailed introduction, notes and references on them have much been appreciated by the scholars. She has actively participated in the National and International Seminars and discourses and presented he research papers on Saivism in the philosophical conferences held at Toronto, Ottawa and Montreal. She is a deeply religious lady and devotes her entire leisure in persuit of ancient Indian Philosophical thoughts and culture.