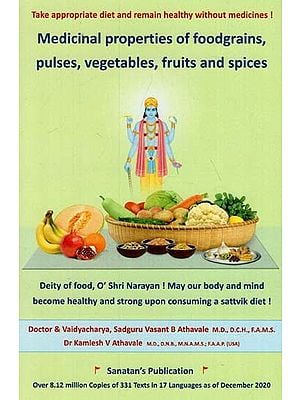 FREE Delivery
$23
Take appropriate diet and remain healthy without medicine !
Quantity
Ships in 1-3 days
Notify me when this item is available

23 years in business
Introduction to Authors

Sadguru (Dr) Vasant Balaji Athavale was a renowned Paediatrician. He founded the Paediatrics Department in 1959 in Lokmanya Tilak Mahanagarpalika Hospital, Mumbai. He was Professor and Head of this Department from 1960 to 1990. He was the Chairman of the ‘International Conference on Alternative Medicine’ seminar in Bangkok in 1980. In 1996, He received the international honour for the ‘Best author of books on Ayurveda’. In 2001 & in 2012 respectively, He was honoured with the ‘Lifetime Achievement Award’ in an International conference on ‘Ayurveda and Hepatic Disorders’ and by the Indian Academy of Paediatrics.

1. The journey from being a seeker to becoming a disciple

A. Having the quality of selflessness and the attitude of sacrifice, which are essential for spiritual practice : Sadguru Vaidyacharya (Dr) Vasant Balaji Athavale started noting down higher level philosophical thoughts on Spirituality in 1980. He toiled day and night to create a vast treasure of knowledge on Spirituality. He donated this treasure to Sanatan Sanstha (to become Sanatan’s Texts) in 1990. This sacrifice, before He became a Saint indicates the level of His spiritual practice & seekership. Due to His writings, Sanatan’s Texts are now becoming inclusive in the true sense.

B. In 2004, He became Paratpar Guru (Dr) Athavale’s disciple (A great Saint who is also His younger brother and is the Founder of Sanatan Sanstha, the world-renowned spiritual organisation).

On 16.12.2012, He reached Sainthood due to His spiritual emotion, intense yearning, an inquisitive nature & humility.

3. Active in seva for Sanatan’s mission until His last breath

Sadguru (Dr) Vasant Athavale kept performing satseva for Sanatan’s mission until His last breath. When He came to know of Divine particles found in Sanatan’s Ashram, He inquisitively studied the subject, contemplated on how to conduct research on this topic from a scientific perspective and gave His own suggestions too.

The co-author, Dr Kamlesh V Athavale, ie is the son of Sadguru (Dr) VB Athavale. He has achieved success in examinations of M.D. (Paediatrics), D.N.B., M.N.A.M.S. (India) and F.A.A.P. (Paediatrics and Neonatology, USA). He is working as a Neonatologist at Duke University Medical Centre (USA). He is also Director of Neonatology at Nash General Hospital.

The word ‘Ayurveda’ means the ‘Veda of life’, that is, knowledge about life. Sages like Charak and Sushrut have always insisted that whatever information and knowledge are available for a useful and happy life should be incorporated in Ayurveda. All medical sciences should be considered as branches of Ayurveda.

Modern medicine provides detailed information on the functions of proteins, fats, carbohydrates, Vitamins, minerals and water and their quantity in every food item. It describes in detail the ill-effects of consuming these food items inadequately or excessively. It also describes a balanced diet and the proportion in which various food items should be included in the diet.

Another special feature of Ayurveda is that it has studied in depth, the qualities of each food item and their effects on the three doshas namely Vata, Pitta and Kapha, tissues like body fluids, blood, etc. and organs like the heart, brain, etc.

Ayurveda accords an equal or rather a greater importance to diet than medication in ailments; hence, a Vaidya advises observance of dietary restrictions to maintain good health in every individual and to cure the patient. It emphasises that a patient may not take medication but he should certainly observe dietary restrictions. The reason is that one takes medicines in small doses of a teaspoonful or a tablet; however, food is consumed in a large quantity.

Ayurveda has classified food items and has stated the most beneficial and most harmful food item in each class.

To facilitate handling of this Text, it has been divided into two volumes for the sake of convenience of the readers. The science of dietetics will be understood totally only after reading both these volumes.

This Text is useful not only to Vaidyas, doctors and students but to every individual. If one takes diet by studying this book, one can enjoy a long, healthy, useful and happy life.

Deity Vishnu is the Deity of food. We fervently pray unto Deity Vishnu to bless everyone with the best possible food so as to make physical, mental & spiritual progress and through it enjoy the Bliss of the divine nectar. - Authors **Contents and Sample Pages** 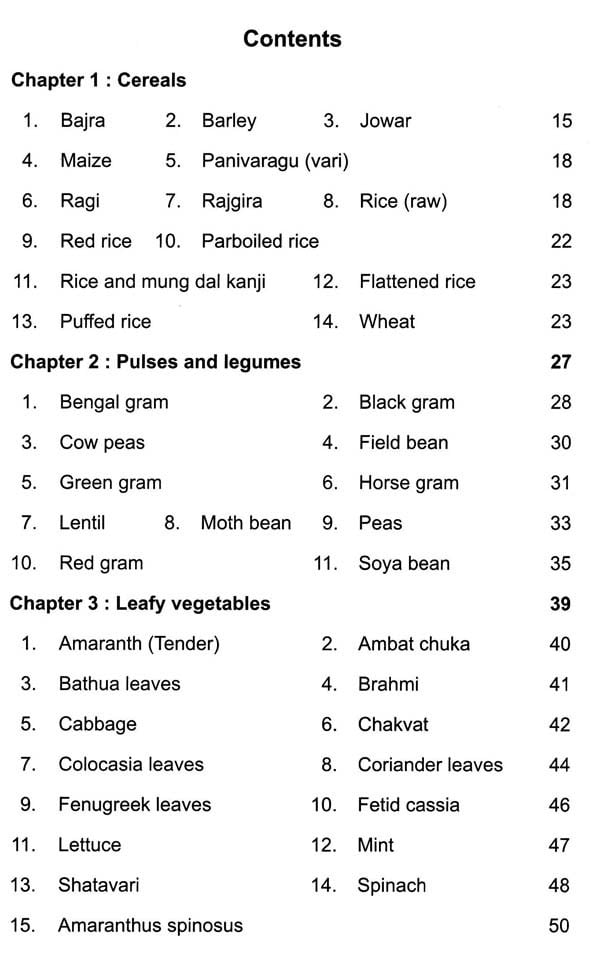 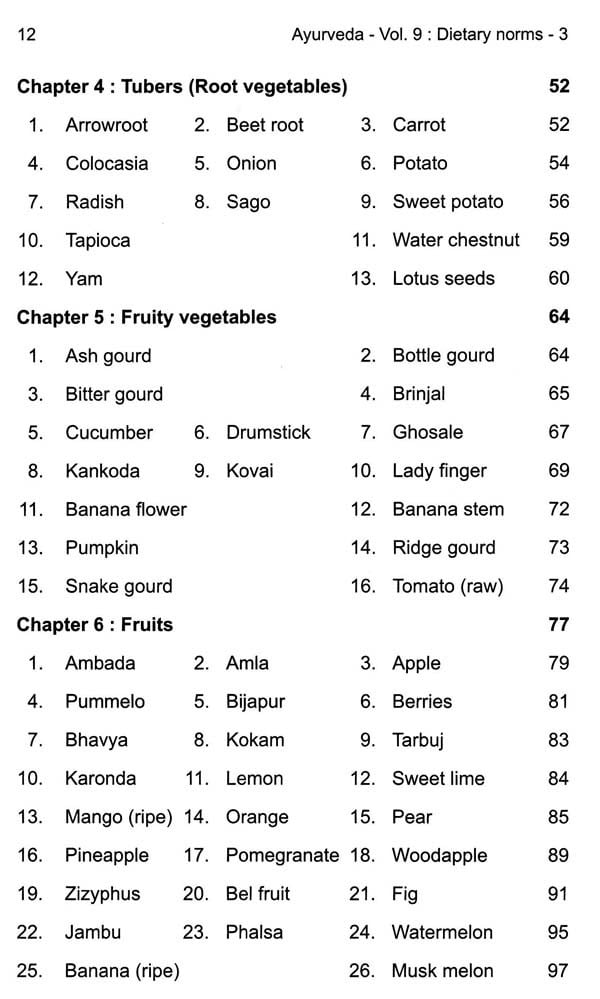 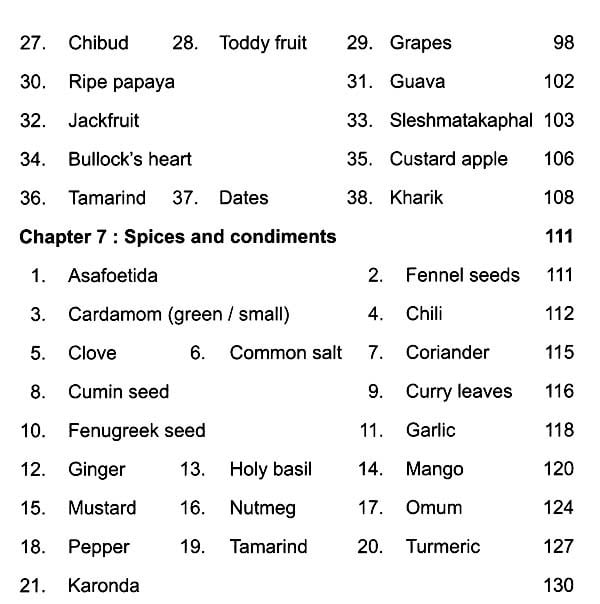 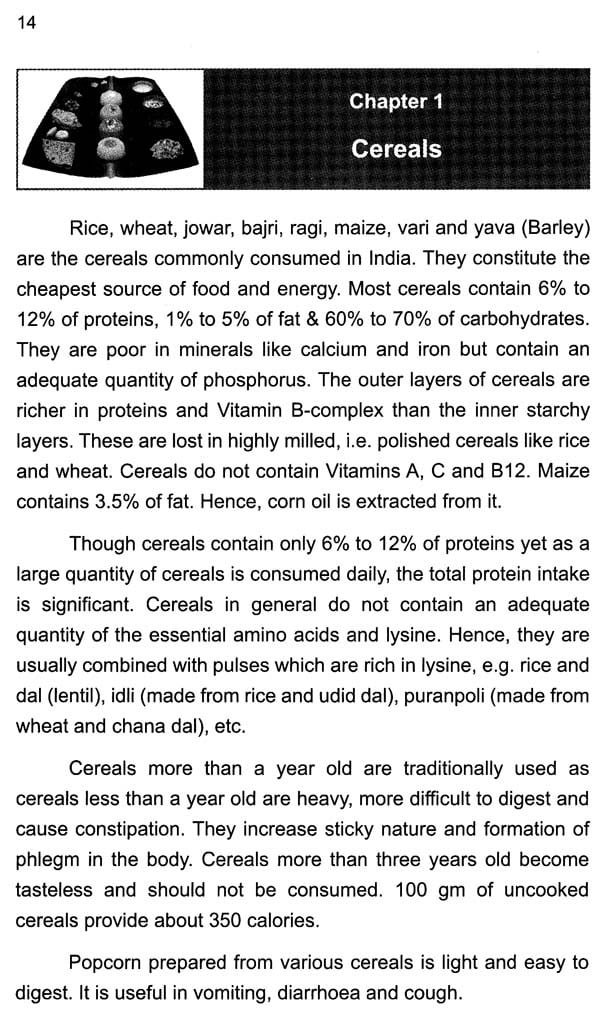 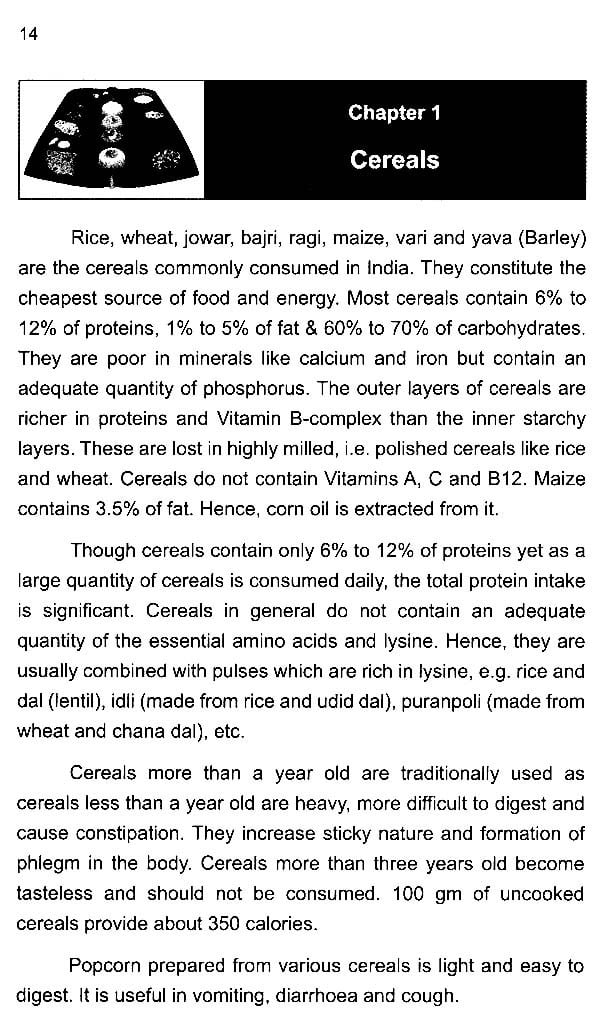 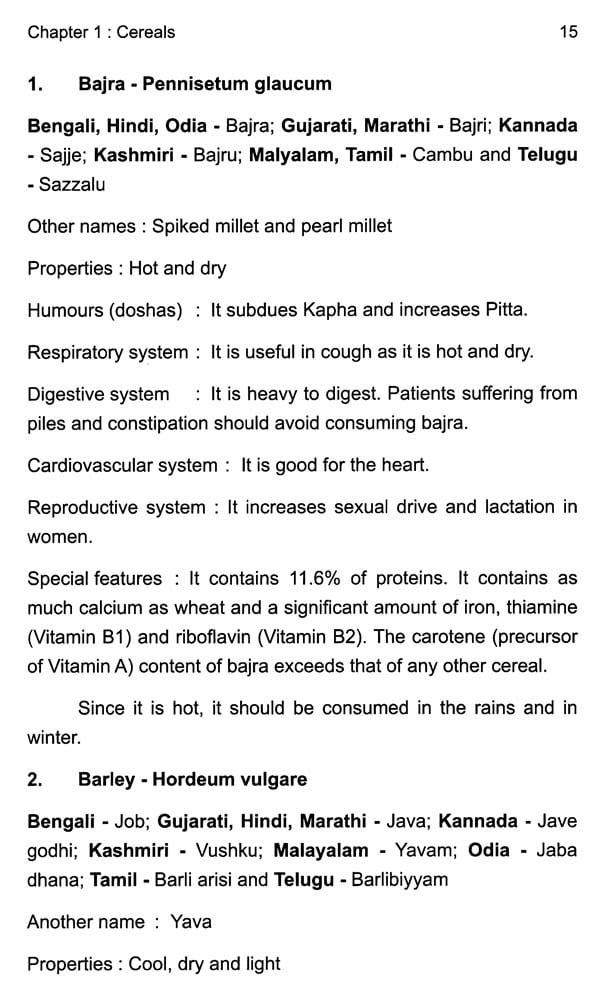 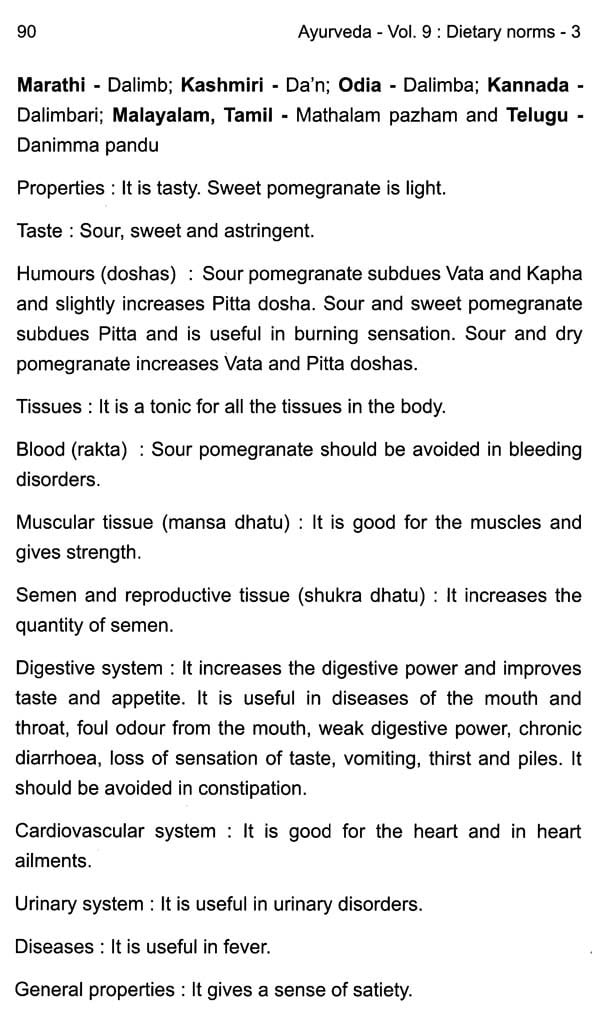 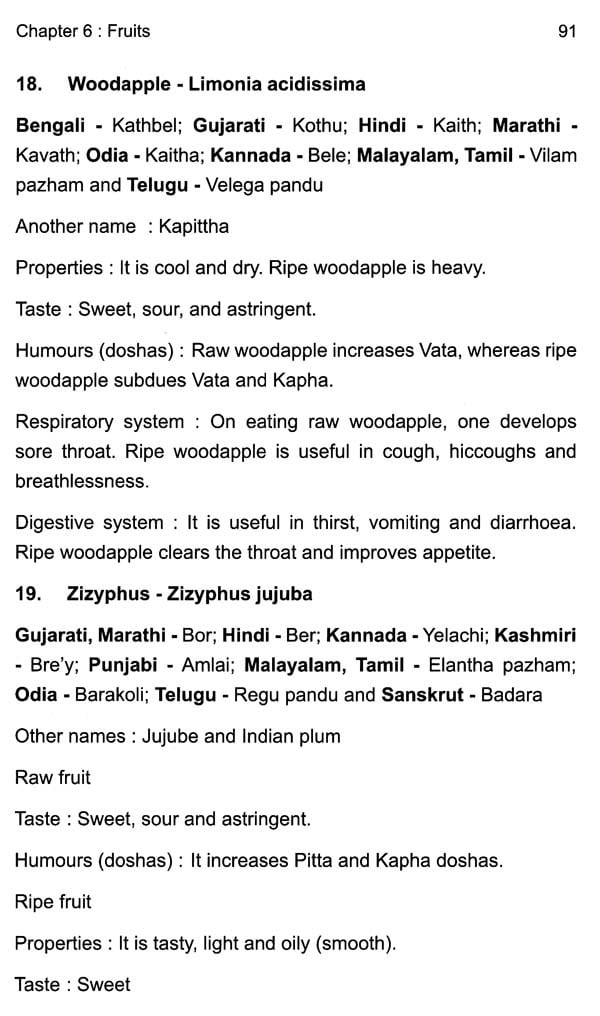 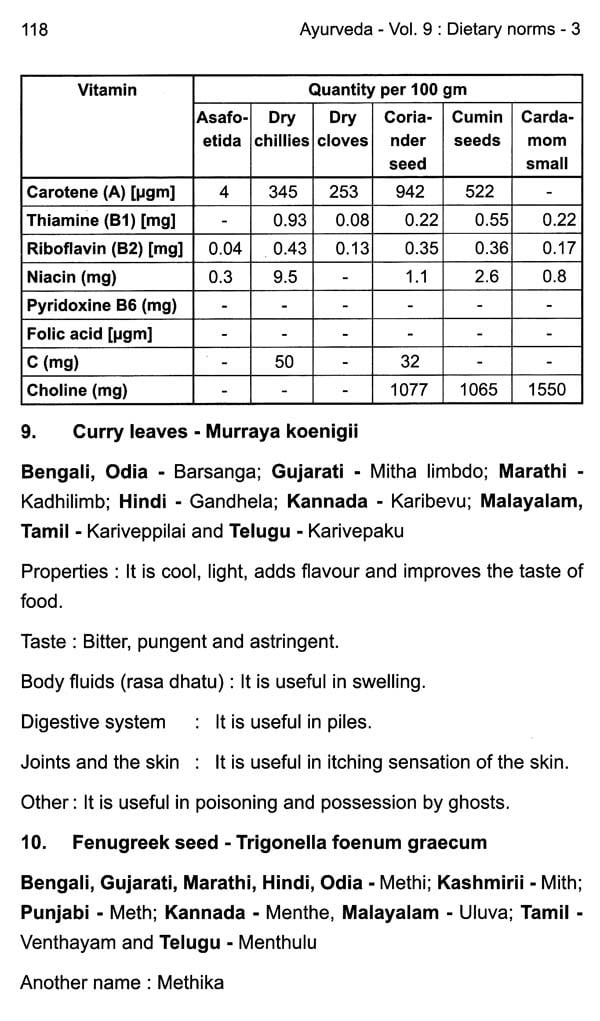 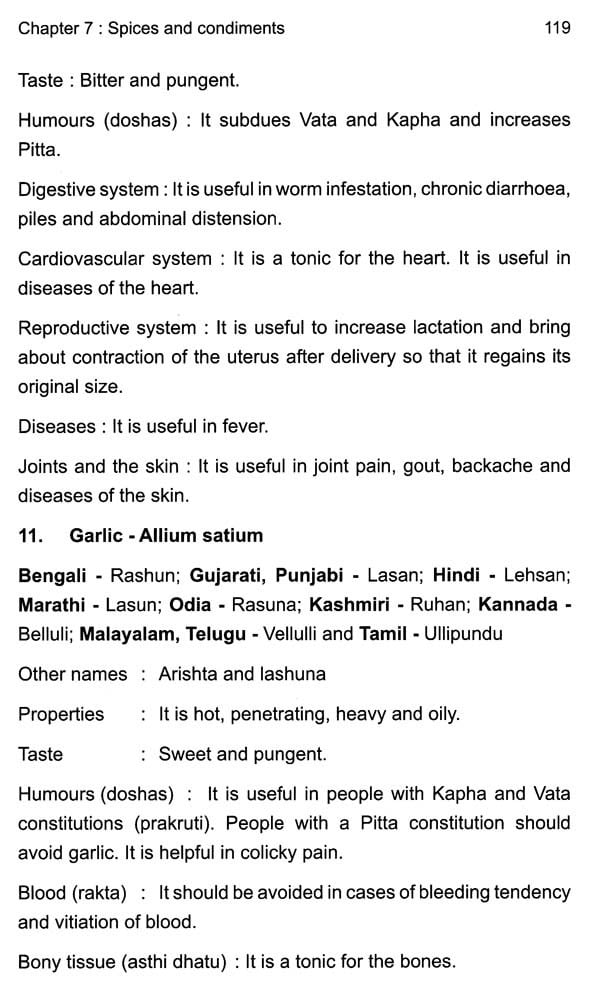