Mewar under Maharana Kumbha (An Old and Rare Book)

Mewar Under Maharana Kumbha is a study of the emergence of Mewar as a political power in the state system of medieval India during the fifteenth century. As an aftermath of Timur's invasion when the Sultanate of Delhi started crumbling into pieces and in the regions of Gujarat, Malwa, Khandesh and Jaunpur, new Muslim powers emerged as independent kingdoms, in the region of Rajas- than. Mewar under the leadership of the Sisodias also started recovering its lost power. While Maharanas Hammir, Kheta, Lakha and Mokul constantly strove to establish the authority of Mewar, it was under the leadership of Maharana Kumbha that Mewar acquired the position of a first rate power.

Kumbha ascended the throne at a time when Mewar was suffering from internal dissensions and, from outside was facing aggression from the rulers of Gujarat, Malwa, and Nagor. Maharana Kumbha certainly rose to the occasion and whatever he could do to promote the power of Mewar was by itself no mean achievement. In this study side by side with the political aspect the administrative and cultural aspects too have been examined which help to place Mewar in its proper perspective in the history of the Hajpur s during the medieval period of Indian history.

Dr. Upendra Nath Day (1913, Varanasi) born in a particular period of Indian history when one wave of freedom struggle was being followed by another. By the time he finished his school education (London Mission School, 1930), the freedom movement in the country turned round the corner and Iike many of his contemporaries he left his academic life for a brisk eventful political stretch in the Salt Satyagrah. Thus, it was almost after a decade, that he did his M.A. in History from the Banaras Hindu University in 1939, securing top position.

During 1939-41, his plan to settle down in life with a lectureship first at Bikaner for a short spell and then at Banaras Hindu University was frustrated with his joining the 'Quit India' movement.

Since then for eight long years, he tried his hands at many professions that had nothing to do with teaching.

Formerly Dr. Day was a Reader in History, Delhi University, attached to the Institute of Post- Graduate Evening Studies. In 1968 he was elected President of the Medieval History Congress.

Dr. Day has widely contributed to various periodicals and research journals. He has contributed sections in the Gazetteer of India, Vol. II and Comprehensive History of India, Vol. V. Besides, his works include The Government of the Sultante, Some Aspects of Medieval Indian History. The Mughal Government, Medieval Malwa, Administrative System of Delhi Sultante and Bharatiya itihas (Hindi).

Mewar Under Maharana Kumbha seeks to study the emergence of Mewar as political power in the state system of Medieval India during the fifteenth century. As an aftermath of Timur's invasion the Sultanate of Delhi crumbled into pieces and in the regions of Gujarat, Malwa, Khandesh and Jaunpur new kingdoms emerged under the leadership of their Muslim Governors and Delhi was reduced to the position of one of the states and no more remained as a single state in political set up of Northern India. It was in this process that Mewar under the leadership of the Sisodias started as one of the important states. While the Maharanas, Hammir, Kheta, Lakha and Mokul constantly strove to establish the suzerainty of Mewar over the rest of chiefs of Rajasthan, it was under the leadership of Maharana Kumbha that Mewar acquired the position of a first rate power.

Maharana Kumbha ascended the throne at a time when Mewar was internally suffering from the in-fighting of the various feudal elements and from outside it was facing the aggression of the rulers of Gujarat, Malwa and Nagor. Maharana Kumbha certainly rose to the occasion and whatever he did for Mewar is by itself no mean achievement.

The present work is a study in interpretation and attempts at placing both Maharana Kumbha and Mewar in their proper perspective. The valued opinion of earlier scholars have been fully examined and wherever judgement demanded such opinions have been rejected but never with malice. The author in his bumble way has tried objectively to put together a connected story of Mewar.

The author wishes thankfully to acknowledge the help received from Shri R. S. Mathur, M.A. in preparation of the work. The author also wishes to express his thanks to Shri Mohan Lal Gupta for his encouragement in completing the work. 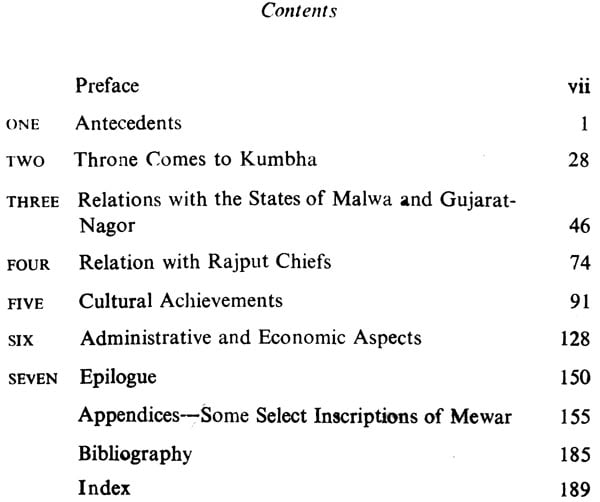 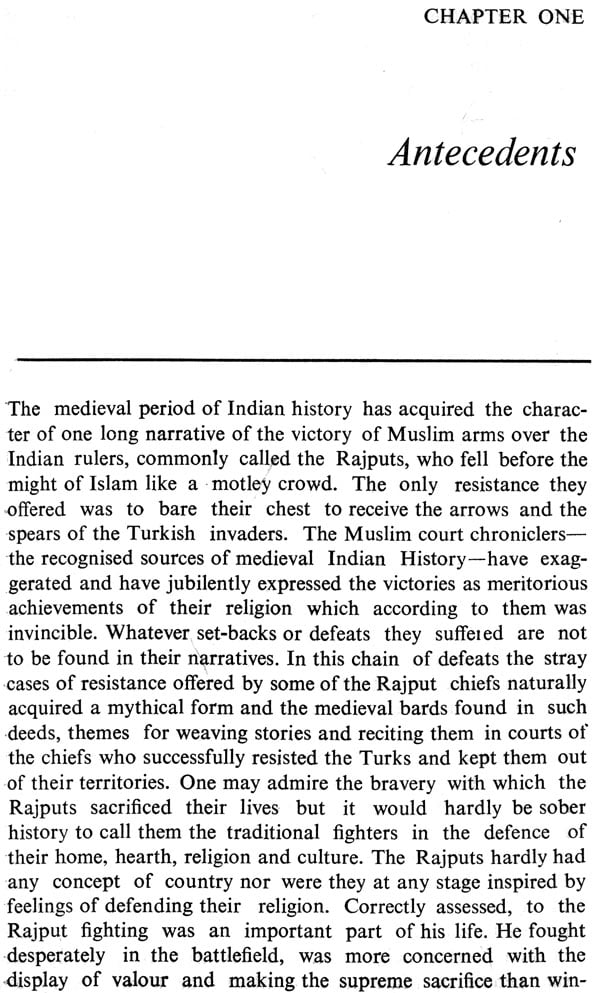 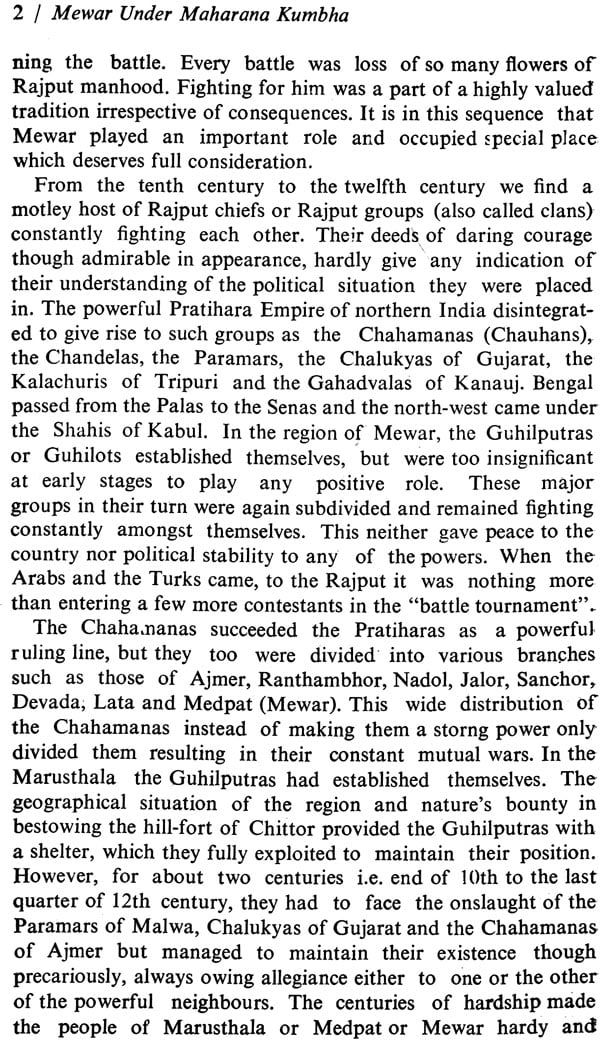 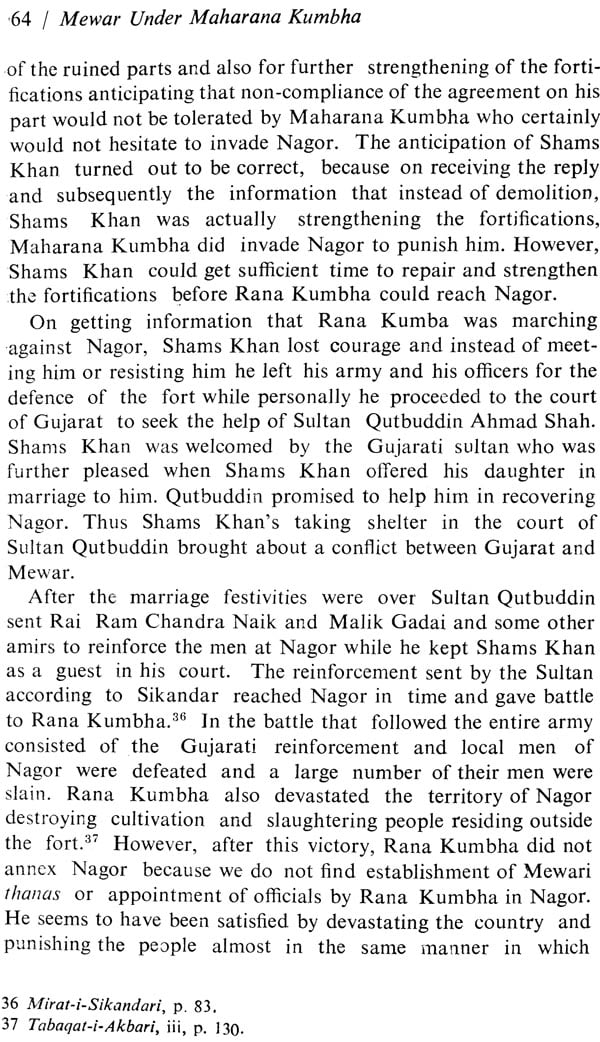 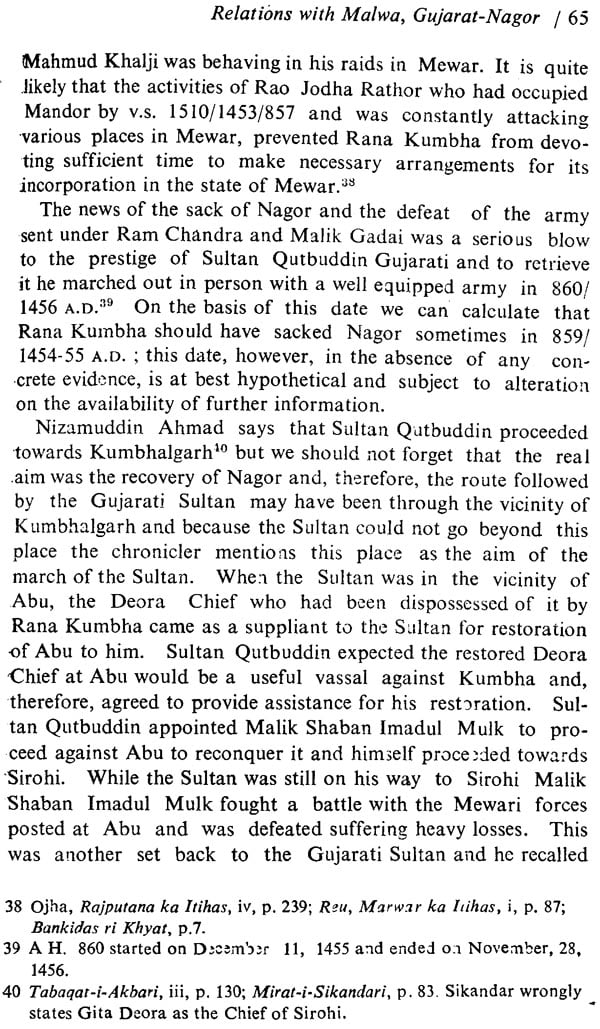 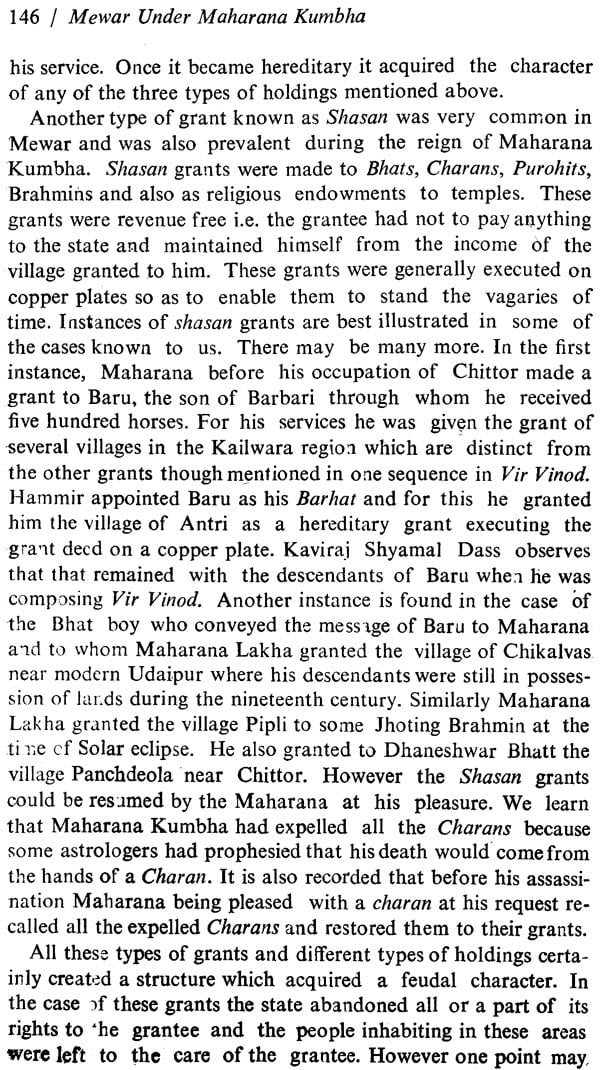 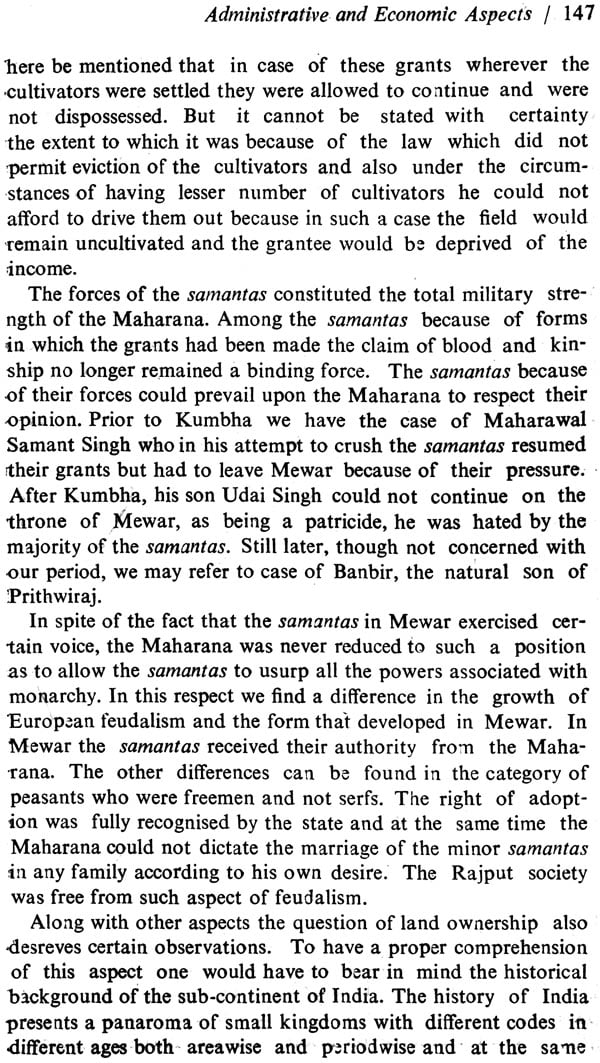 Chittorgadh Kirtti-Stambha of Maharana Kumbha (The Ideal and The Form) (1440-60A.D)
By R. Nath
$62
FREE Delivery Kumbhalgarh: The Pride of Maharanas of Mewar
By C. Dorje And D.N. Dimri
$69
FREE Delivery Maharana Pratap (The Symbol of Pride and Honour who fought to the last for his dignity and freedom)
By IGEN B.
$12.50 The Kingdom of Mewar
By Irmgard Meininger
$79
FREE Delivery Theory and Practice of Muslim State in India
By K.S. Lal
$35
FREE Delivery