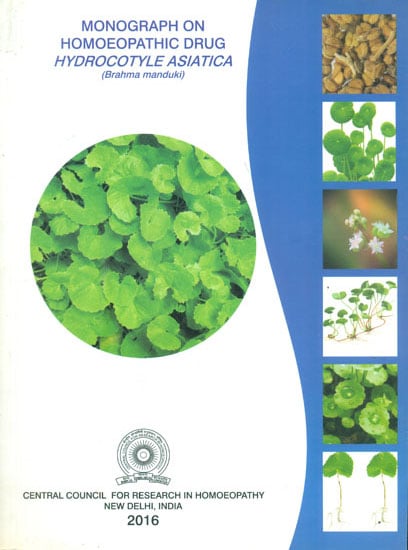 Hydrocotyle asiatica or Centella has been long known as an Indian Medicine. References to the oblivious uses of Centella were documented at least 2000 years back with the Indian Ayurvedic and Chinese traditional medicine. The herb also known as Brahma manduki has been used medically in India by Hindu physicians from ancient times. It is regarded as one of the most important rejuvenative herbs in Ayurvedic Medicine. As a brain tonic, it is said to combat stress and depression and aid intelligence and memory. It strengthens the adrenal glands and cleanses the blood to treat skin impurities. Also, it is useful in venous insufficiency and varicose veins, wound healing and skin lesions. It was traditionally employed in the Indian and African continents as an important treatment of leprosy. In 1852, Dr. Boileau of India having been for many years afflicted with leprosy experimented with it as a remedy and recovered.' Its active principle, asiaticoside is known to dissolve the protective waxy coating of the bacterium, Mycobacterium leprae.

Ever since 16th century, Brahma manduki is often confused with Brahmi. Both Bacopa monnieri (Brahmi) and Centella (Brahma manduki) have some common therapeutic properties in Vedic texts and are used for improving memory. Probably the earliest study of Brahma manduki as 'medya rasayana' i.e. improving the mental ability was carried out at the Dr. A. Lakshmipathy Research Centre under CCRAS.

Due to the medicinal properties of the plant it was included in Indian Pharmacopoeia in the 19th century. It appears in Homoeopathic Pharmacopoeia ofIndia, Volume I and X. Gradually, it was incorporated into other Pharmacopoeias too like British, Chinese, Dutch, German, European and into Polish Pharmacopoeias.

In order to undertake detailed proving and its clinical utility, Council has undertaken detailed study in three stages.

Firstly, Council studied about the standards for quality production in terms of pharmacognostic, physicochemical and pharmacological properties of the drug.

Thirdly, -in order to bring out the spectra of other medicinal uses and to scientific all) demonstrate, comprehensive health maintaining abilities of Centella, clinica verification was conducted from 1979-80 to 2004-05 on 11,471 patients at sever study centres. During the study 177 symptoms of the drug were verified including symptoms that appeared during the proving conducted by the Council.

This information was gathered not only from research data but also from practical experience of doctors in the OPDs. It has been found useful in Vertigo; pricking pain in palms and arms confirms its role in leprosy as same symptom is verified on leprosy patients by Daruty Dymock,'" Swelling of testicles and drawing pain in spermatic cord aggravated by sneezing; Pruritus vulvae; Leucorrhoea - thick & white; Coryza- white thick discharge; Itchy papular eruptions; Apthous ulcers; Dropsy of lower limbs & Dry cough with pain in throat.

The spectra of available symptoms of Hydrocotyle in the form of rubrics in various sources in addition to Council's findings are also presented as a comprehensive repertory for ready reference to the readers.

The purpose of this monograph is to enable the profession to use this information in their clinics and researchers in their work and to seek feedback authenticating its clinical use for the benefit of patients. 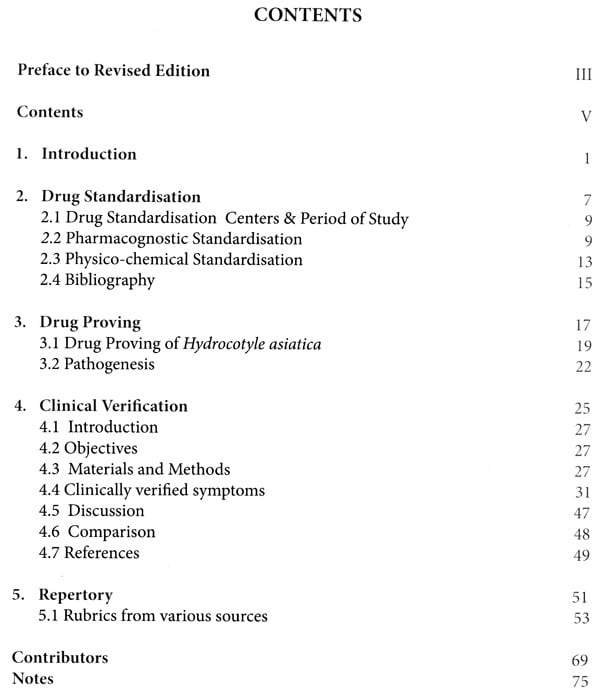 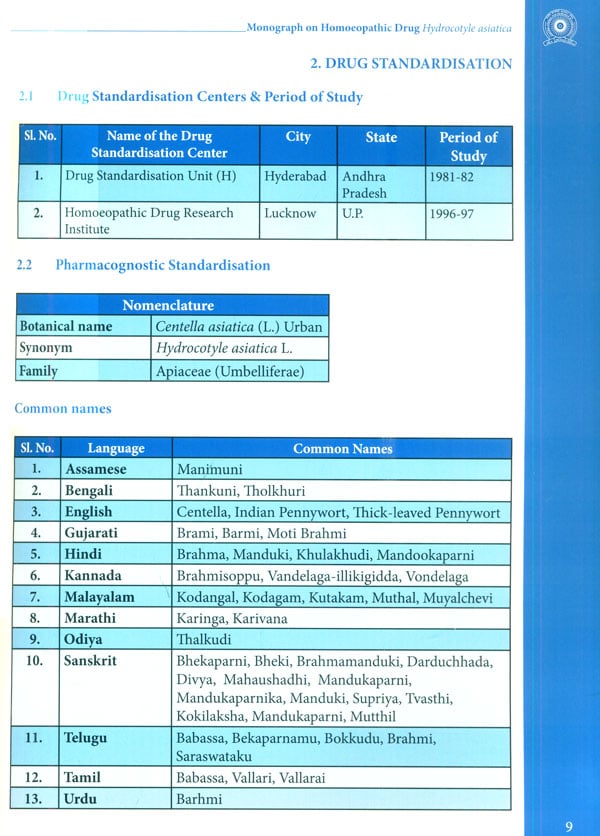 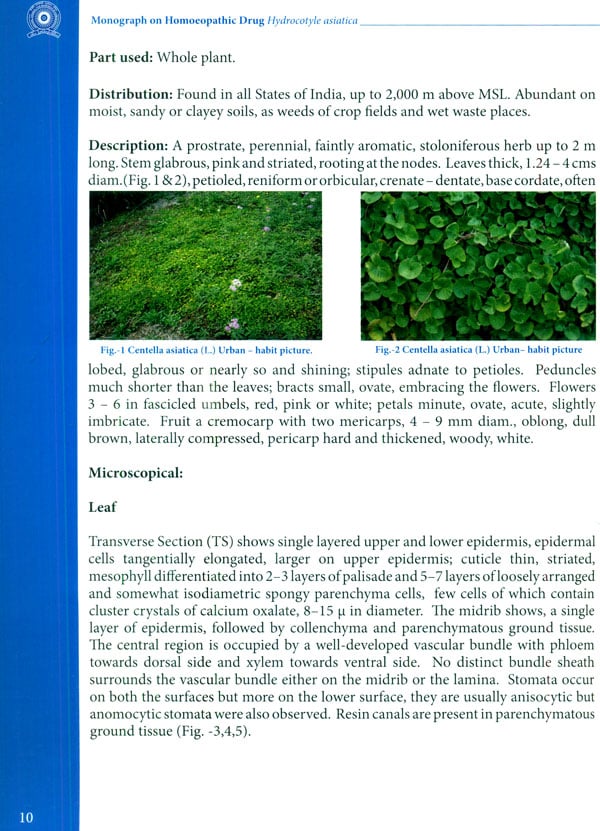 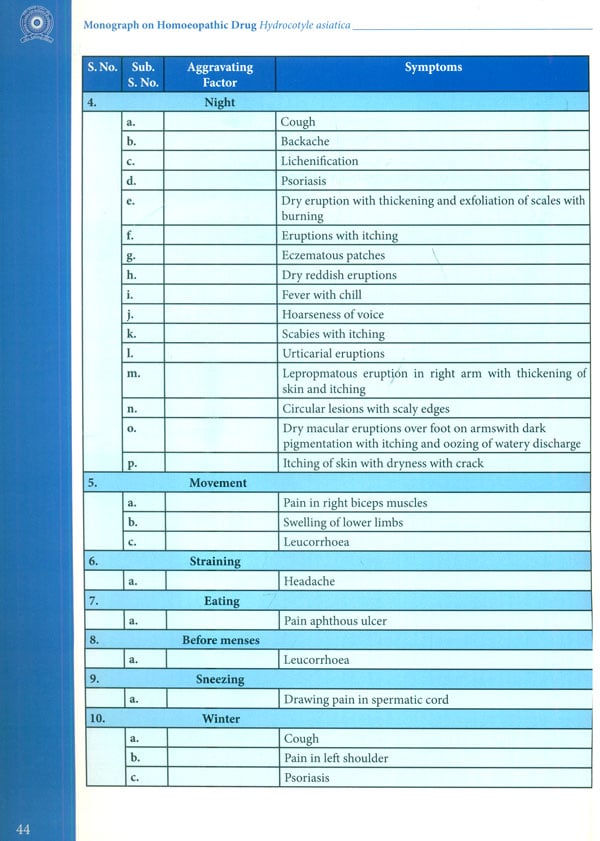 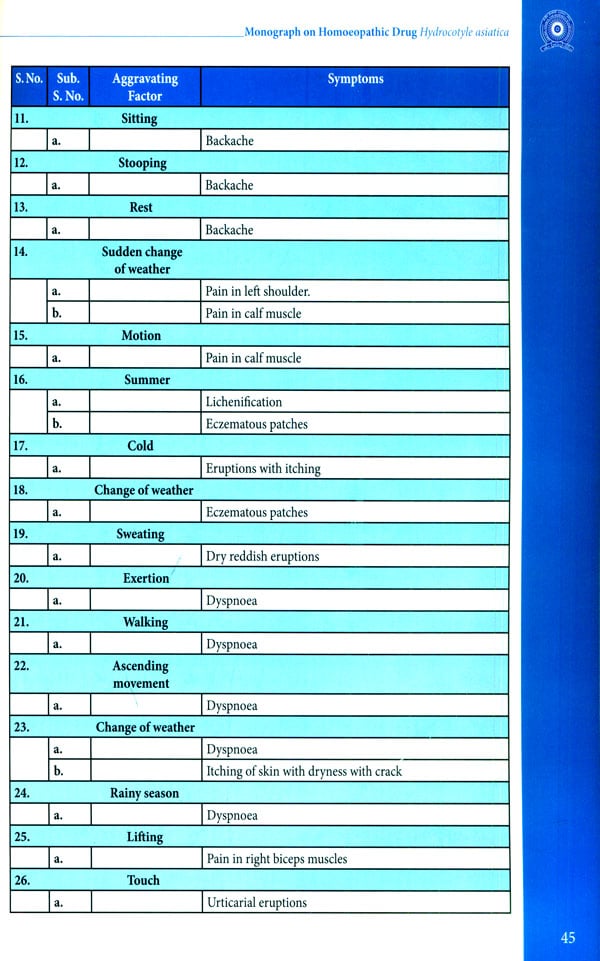 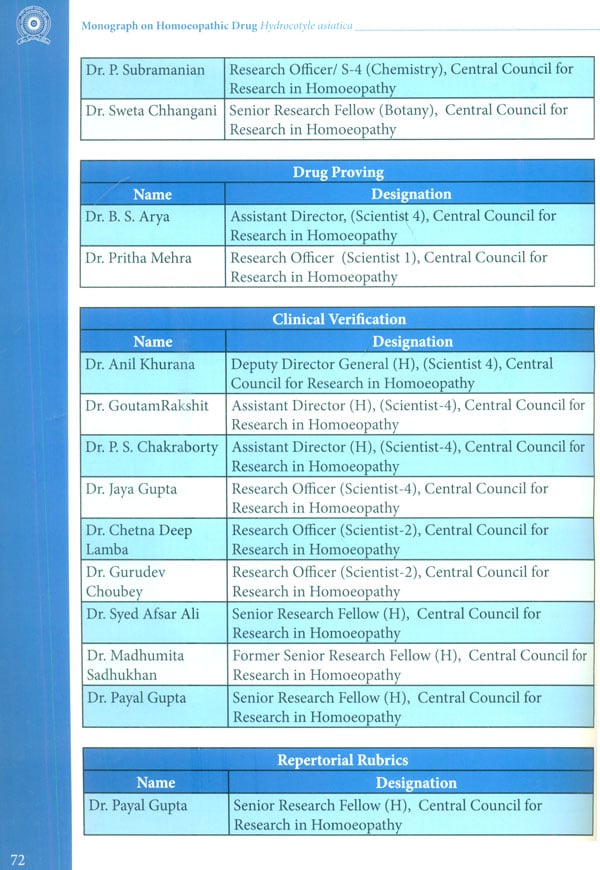