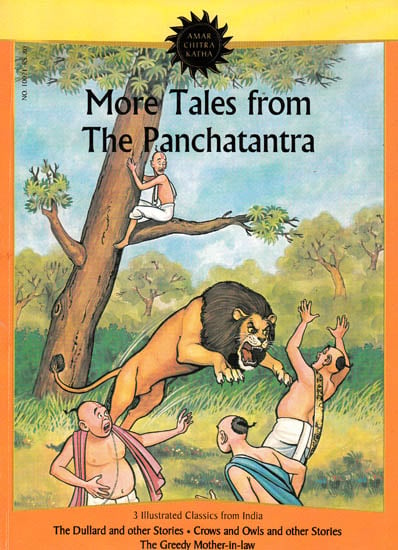 More Tales from the Panchatantra – 3 Illustrated Classics from India (The Dullard and other Stories, Crows and Owls and other Stories The Greedy Mother-in-law)
Email
Whatsapp
Facebook
Pinterest
Twitter
Copy link

It is believed that Pandit Vishnu Sharma, a great Hindu scholar, wrote the Panchatantra in about 200 BC. But in all probability the tales by themselves could be much older. Some of them date back to the period of the Vedas and the Upanishads (1500 BC to 500 BC).

The Panchatantra is woven around the frame of a tale about a King who entrusts his three dull sons to a learned man, Vishnu Sharma. The Brahmin takes them to his hermitage where he recites specially composed tales, divided into Panchatantras or five systems, on dealings with people.

There are several versions of the Panchatantra. ‘The Dullard and other Stories’ as well as ‘Panchatantra — The Greedy Mother-in-law’ in this special issue are derived from the version in Kannada by Durga Simha (12th century AD).

Panchatantra is the oldest collection of stories for children, written originally by Pandit Vishnu Sharma. One of the versions by Vasubhaga Bhatta is now lost. However, fortunately the stories in Bhatta’s edition can be found in the Kannada translation by Durgasimha, a minister in the Chalukyan kingdom of Jayasimha. It contains twenty stories that are not usually included in the popular editions of Panchatantra.