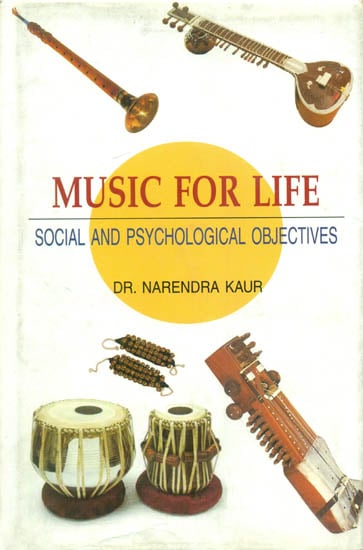 This book is an effort made in a direction to highlight the aims and objectives of music which can be applied for the overall betterment of the life on our earth. Scientific findings and the ancient literature support above role of music. Though music has been known more as a good source of entertainment or a hobby but it has a very important role to play and an indispensable place in our day-to-day life.

Based on the report from various corners this book is a record of the different ways in which music is being applied to curb social and psychological evils and as a complementary treatment for various illnesses all around the World. Hence this is asserted in this book that music should given its due importance by applying it on a larger scale in dealing with problems such as stress, mental retardedness, communalism etc.

Dr. Narendra Kaur, obtained Ph. D in Music from University of Delhi. She is a vocalist. Presently she is working as Assistant Professor in Arya College, Pathankot, Punjab, India. She has published a number of research papers and notations of Shabads in the ragas prescribed in Guru Granth Sahib.

I count it an honour to be a student of an eminent professor and performer, Dr. Anupam Mahajan, who has inspired me for this book which is a detailed report on the role and importance of music in our day-to-day life. The utility of music has been established in many areas ranging from its indispensability in human life to the positive effects, it has on other living beings like animals and plants.

This book is an effort to search about the scope of music while its main objective is to highlight the contribution of music in solving psychological and social problems and to focus on the application of music in shopping malls, street junctions, railway coaches, operation theatres, board rooms, nursing hospitals, rehabilitation centres and parks etc.

Music is a tool for soothing, relaxing and enchanting its listeners. its listeners. Music has for long been applied as a remedy to treat physical and psychological ailments, to eliminate social evils and for the cause of overall development of the under-privileged.

The human organism always remains in the process of development. Physical and psychological changes occur continuously throughout life span. Our whole being gets affected by our own heredity and the environment we live in. Music plays a vital role by helping in physical, psychological and social development of the child. It also in the enlightenment of the soul and is an indispensable part of our education system.

Music is a system of education which imparts knowledge and experience as to how to elevate and animate the levels of consciousness. Music evokes in us awareness of the beauty of the nature, public life and art. It creates an aesthetic outlook in us and hence develops our personality.

Music arouses various emotions in mind and can be regarded as medium for expressing thoughts and feelings through its tones and rhythm. Musical compositions, forms of music, rhythm and tempo, acoustics of music, various instruments, personal preferences, efficiency of the performer, cultural backgrounds and various ragas are the main factors which are responsible for the arousal of particular emotion.

Every kind of music has its origin in a particular society or culture. Traditional activities of the societies and cultures give birth to folk music. Folk songs depict the real picture of a particular culture or society and are an imperative part of social ceremonies and festivals.

Music has natural power to fetch attention of the people therefore it has always been used for the expression of social protest as well as publicity. In the correctional centres, music is considered to be a very useful tool. Inmates may have a choice to learn music in the prisons. They may listen to music or even can have training in music. Nevertheless, music plays a pivotal contribution in challenging communalism. Patriotic songs unite people belonging to various castes, creeds and regions. Music inculcates in us the feelings of peace, harmony and national unity.

Today, there is a purpose behind applying music in shopping malls, hospitals, rehabilitation centres, railway coaches and in parks etc. Music is serving various purposes in every walk of life. It creates a very calm atmosphere in the surroundings, fascinates people, refreshes mood and increases work performance; that is why everyone longs for music. Though background music has its limitations but if chosen appropriately, must have its effect.

I express my deep sense of gratitude and warm regards to Prof.(Dr.) Anupam Mahajan for her valuable guidance and encouragement for this work. I am very much indebted to my family members for all their support; especially my lovely son Jaideep Singh Madaan to spare me enough time so that I could carry out this work. I owe my gratitude and respect to my husband, Jaswinder Singh, for his untiring help and sincere advice and support at all the stages till the completion of this project. I dedicate this book to my caring husband.

The Art of Music

Music is a composition of melodic sound which pleases human mind. There is nothing in nature that arouses our attention affects our feelings as quickly as sound. The murmuring of water, the sighs of the zephyrs, the whispers of the evening breeze, the roar of the storms, the chirpings of the birds, the cries of the animals, and the hum of distant multitudes excite in our minds the feelings of pleasure, pain, or fear, and contain in them the germs of music.

Pt. Sarangdeva says “Musical as well as all kinds of sound (nada) first emerges from the navel base (muladhara) as a result of friction of the air (prana vayu) and the heat energy (agni): nakaram prananamanam dakaramnalam viduh”. Hermann Helmholtz saya “ a noise is accompanied by a rapid alteration of different kinds of sensations of sound, whereas musical tone strikes the ear as a perfectly undisturbed, uniform sound which remains unaltered as long as it exists.”

The above slok means that music is singing, playing instruments and dancing. Margee and Desi are kind of music. The music which is found by Brahma used by Bharatmuni before Mahadev, and which leads to salvation is called margee sangeet. Desi Sangeet is that which is in accordance with the different custom of various provinces to mind and the one that different customs of various provinces of the country and entertains the people there. Music gives pleasure to mind and the one that does not please, is not music.

The word Sangita has a complex signification. It consists of three thing things-gita, vadya nritya, or song, percussion and dancing. The principles and laws of Sangita get the nomenclature of Sangita Shastra. This may be comprehended in a two-fold view-as an art and as science. As a science music deals with the acoustics. It treats with the origin and propagation of Nada, the sound-the doctrine of shrutis, the doctrine of swaras or musical sound, the formation of the different scales, the rules of murchchanas and tanas, the composition of ragas and their various modifications and variations, the variety of talas or times conformable to regular meter and the rules and directions with respect to the various styles of theatric representation. Music as an art directs to cultivate human voice, to perform instrumental music and lays guidelines for the motions and gestures in dancing. Music can divided into two portions-theoretical and practical. The general and most essential characteristic if gita, vadya and nritya is rakti or the power of affecting the heart.

Music education is said to be Nada Vidya as the whole system of music is evolved from Nada (Sound). Nada gives birth to shruties (microtones) which again form swaras (notes). These swaras, in multiple successions, constitute various ragas and from ragas and from ragas songs are produced. Vadya (Instrumental music) is also related to nada. Because of being accompanied by gita and vadya, nritya (dance) is also related to nada. There for we can say Nada underlies the three constituents of Sangeeta.

Pt. Sharangdev in his book ‘Sangeet Ratnakar’ took singing, playing an instrument and dancing as music but presently dancing is developing as a separate discipline. During the time of Bharat, music was thought of as consisting of vocal music, instrumental music and dancing. With the great strides made in music later on, music was conceived of separate art apart from dancing.

Music is an intrinsic part of nature. Therefore music is as old as nature itself so music definitely existed during prehistoric period also. As in the excavations of Mohenjodaro and Hadappa, various musical instruments like flute, mridang, lutes (veena) and dancing idols have been found.

Many people are of opinion that the creator of this world, Brahma gave the art of music to Shiva, Shiva it to Saraswati. Narad got it from Saraswati and taught to Gandharvas, Kinnarans and Apsaras. Rishis like Bharat and Narad etc. Popularized this art on this earth.

The first musicians are said to have been Narada, Tumburu, Huhu and Bharat. Bharat is believed to have reduced music to a proper system and brought it down to earth from the land of the gods.

In ‘Sangeet Darpan’ of Pt. Damodar, seven swaras are considered to be produced by seven birds and animals like shadaj from peacock, rishabh from chatrik, gandhar from goat, madhyam from crow, pancham from cuckoo, dhaivat from frog nishad from elephant.

Persian scholars believe that seven notes of music were created by Hazarat Moosa. 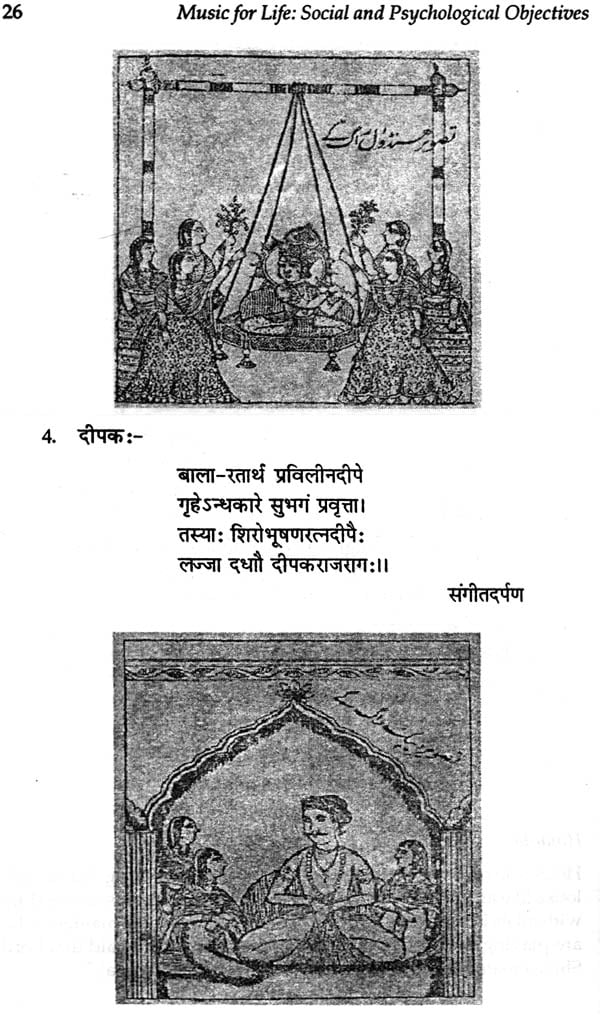 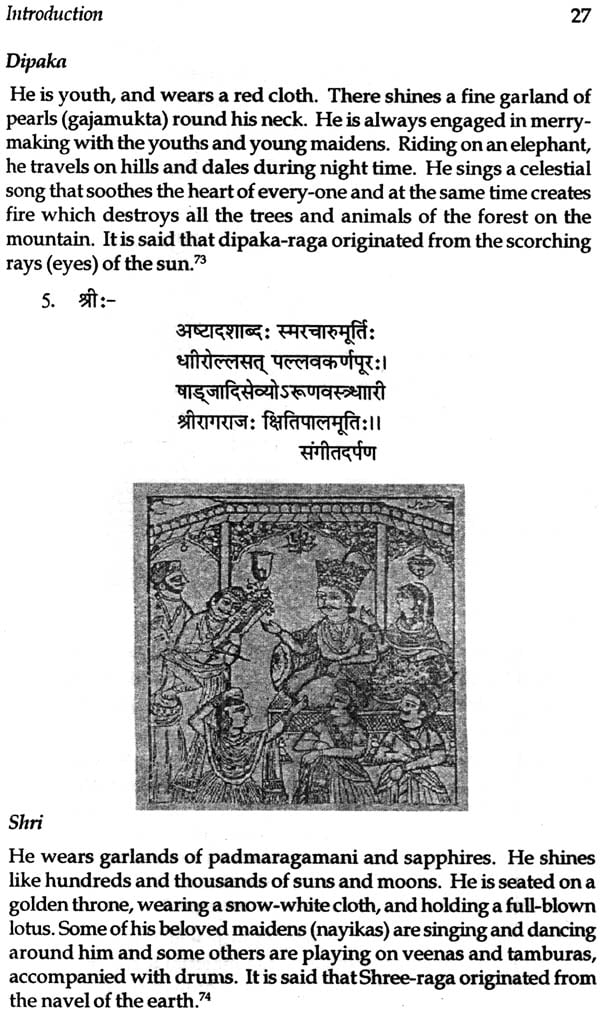 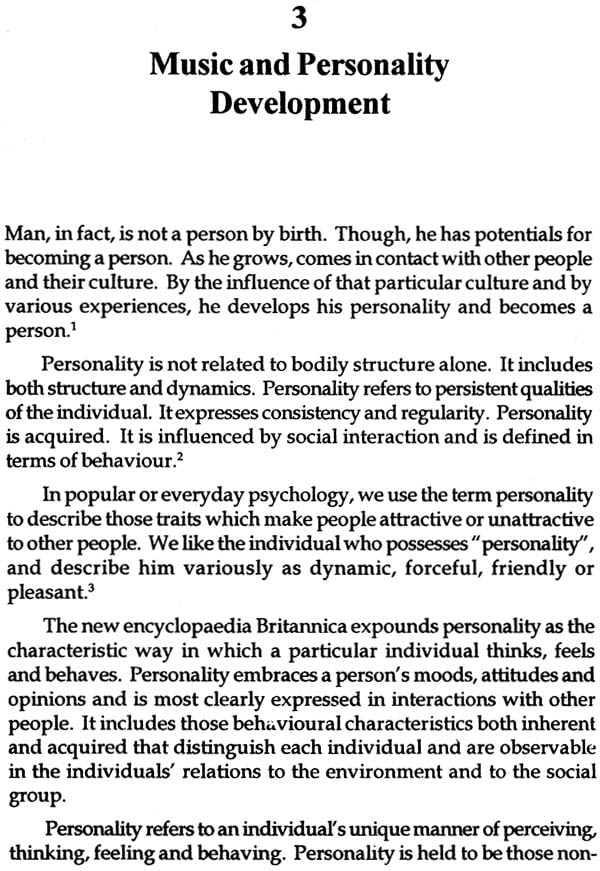 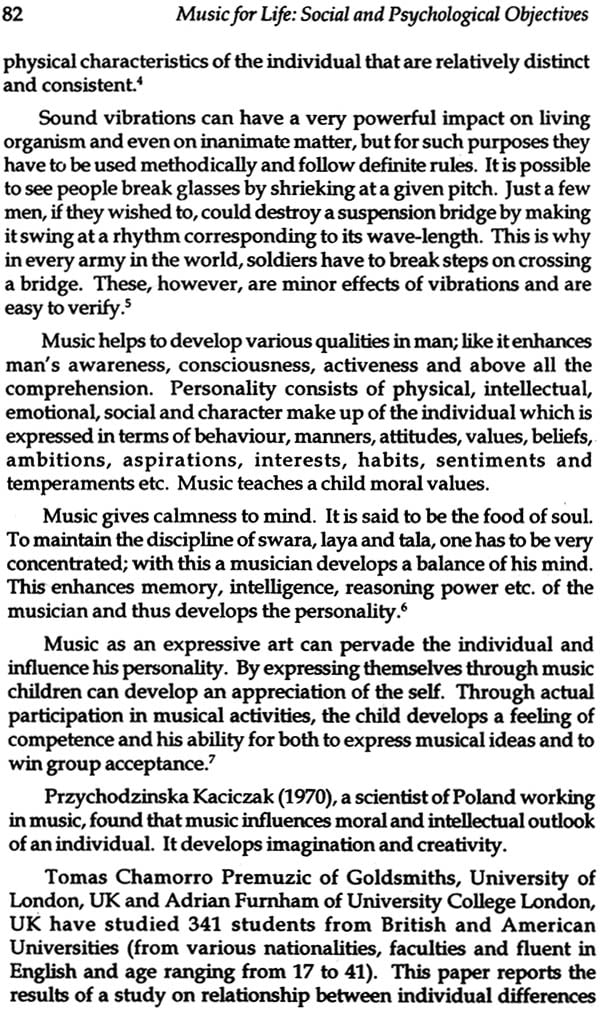 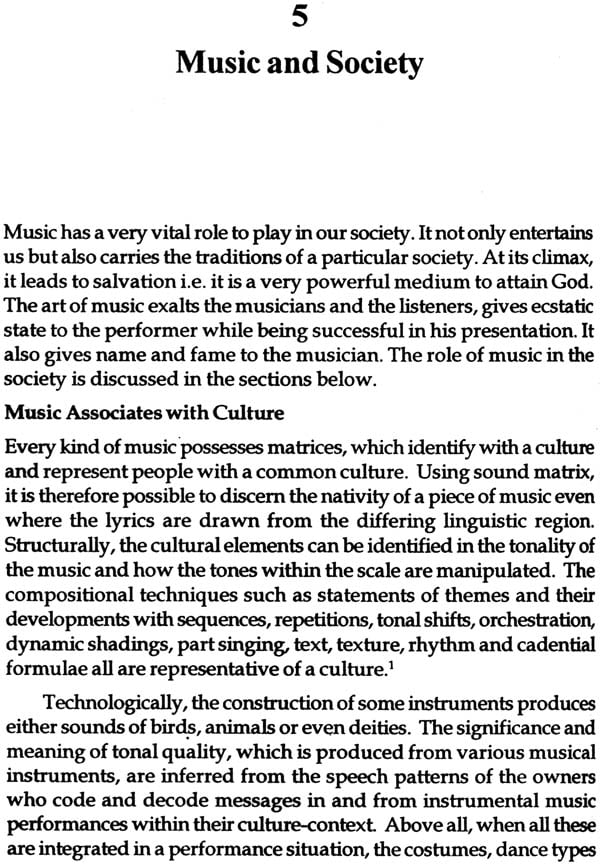 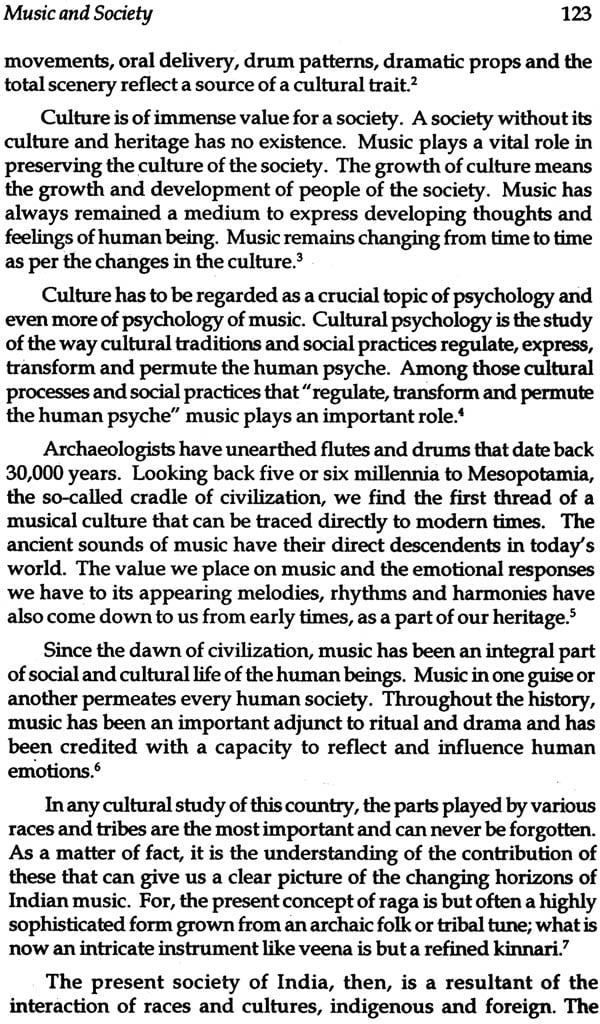 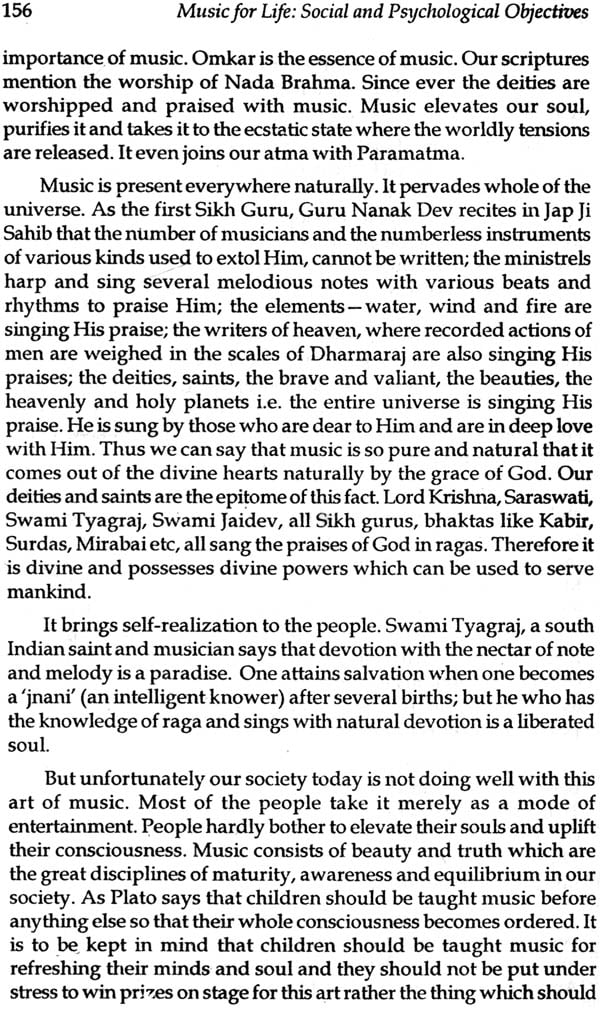 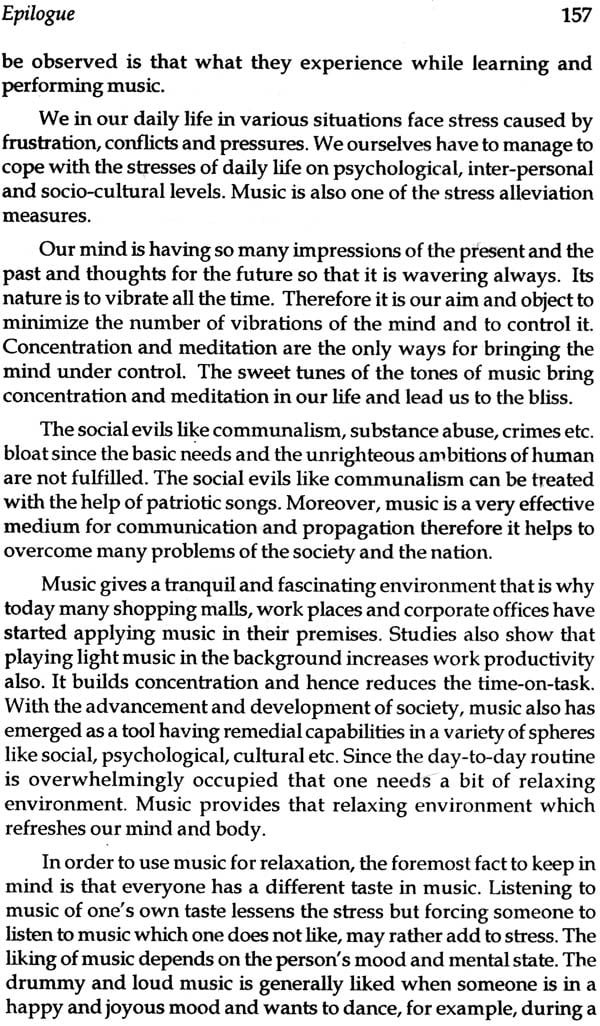 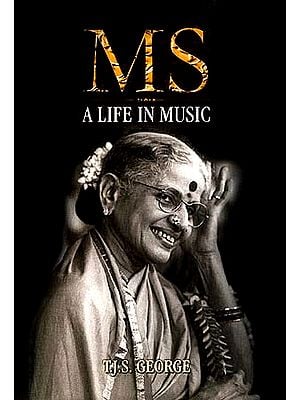 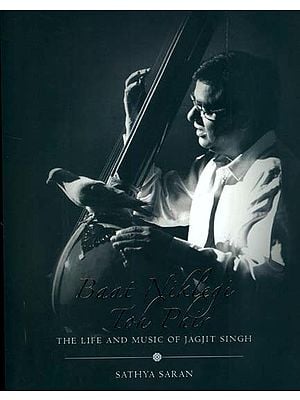 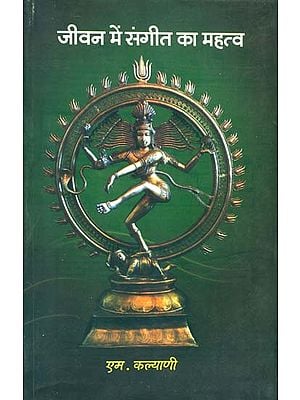 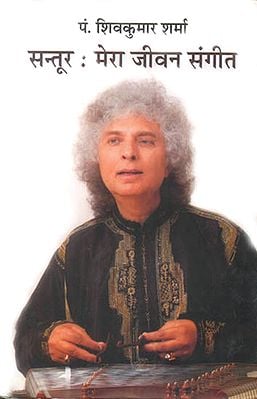 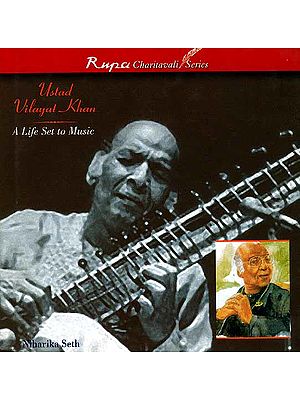 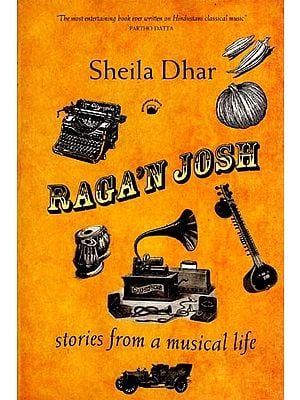 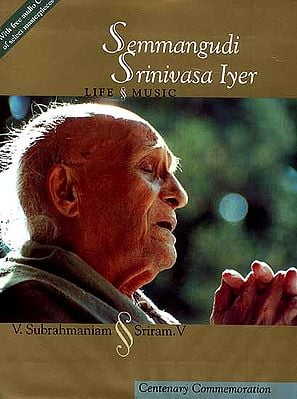 Semmangudi Srinivasa Iyer (Life and Music)
By V. Subrahmaniam and Sriram. V
$40
Out of Stock

Music Therapy in Management, Education and Administration
By Suvarna Nalapat
$26
FREE Delivery
Add a review
Have A Question