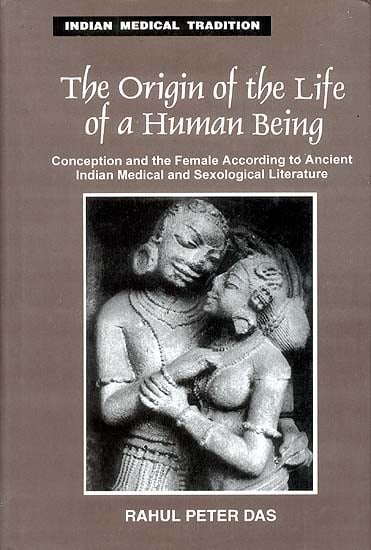 This study attempts to determine how the ancient Indian medical and sexological texts would answer a non-medical question, but also social and religious relevance, namely: What happens in a woman's body at the time of conception? To this end, numerous relevant texts were exhaustively analysed, along with several secondary sources and relevant data from other traditional medicinal systems.

The highly complicated material with data often widely scattered on embedded in problematic contexts required complex analysis. This also entailed delving deeply into Indian medical and sexological theories in general, and tackling basic principles and concepts, hitherto, not satisfactorily described. In the process, layers of obfuscation derived from preconceived notions and apologetics and often first to be removed. This study will thus also benefit those looking at aspects of Indian medicine and sexology.

The main body of the work has been augmented with several excursuses on special problems of Indian medicine and sexology, with an appendix in juxtaposition with Greek and Yunani medicine and select technical terms. Further, exhaustive indices of the text facilitate usage.

Rahul Peter Das, born in 1954 in Germany, was educated in India upto Pre-Medical Examination of Calcutta University. A National Merit Scholar as well as Jagadish Bose National Science Talent Search scholarship holder and Science Fair award winner, he represented India at the London International Youth Science Fortnight in 1973. Leaving for Germany in 1974, he had to pass the school leaving examination (Abitur), which he did in 1975. In the same year, he enrolled at the University of Cologne, where he took up Indology, Islamic Studies and Tamil, moving on in 1978 to University of Hamburg. There he obtained his M.A. degree (1981), D. Phil degree (1985) and a degree in Habilitation (1993). From 1981 to 1994 he did research work at the Universities of Hamburg, Bonn and Groningen (Netherlands), also teaching at the Universities of Hamburg and Groningen. Since 1994 he holds the chair for the Philology of Modern Indian Languages at the Martin Luther University, Halle-Wittenberg, where in 2000 he instituted a new M.A. course on the Languages and Cultures of Post-Classical South Asia. In the first semester of his tenure he was simultaneously guest professor for Indology at the University of Marburg. He has published extensively on various aspects of South Asian studies, most recently on strategic issues related to South Asia.

Critical and comprehensive studies of India’s medical history top the list of urgent desiderate. Far too many books appear on the subject of Indian medicine which are published simply because the title purports to address the topic in some form or another. A perusal of such books immediately shows that little of anything new is offered and what is presented is frequently wrong.

Thankfully Rahum Peter Das the origin of the life of a human being is not a book of this type. Not only has Das penetrated deeply into Indian medical literature but he has also examined the Sanskrit texts of Kamasastra Indian eroticism and other relevant literature to reveal fully and completely how the ancient Indians understood the process of conception and birth.

Never before has an authoritative study of such breadth and depth been devoted to a specific problem of ancient Indian medicine. It utilizes all the tools of philological research while critically evaluating previous scholarship on the subject. It will definitely be an important and constant source of reference for the serious scholar of Indian medicine. We are pleased to offer it to the scholarly world as a volume in the series Indian Medical Tradition.

This study, several years in the making, in some respects quite aptly resembles the growth of a child from an embryo. The germ, a presentation of twenty minutes’ duration at an international conference held at Hamburg in 1985, grew by constant accretion and revision until it was deemed worthy of being submitted as a Habilitationsschrift (post-doctoral thesis) to the University of Hamburg in 1992. But even after its acceptance in 1993 the process of addition and revision continued uninterruptedly until at last I decided that if I did not set myself a fixed cut-off date after which I would stop feeding it with new information, this baby of mine would keep on growing only in my computer and never make it to the printing press and the light of day. In accordance with this decision, new material chanced upon after the end of 1996 has rarely been included, though prior to publication indexes have been added to the whole, this taking several years due to other pressing duties.

But for the generous help accorded by several persons who provided me with or assisted me in procuring relevant literature, my study would never have taken the shape it finally has. Such unselfish assistance came especially from Ronald Eric Emmerick (t), Felix Raymond Erb, Ivo Eier. Abhijit Ghosh, Peter Khoroche, Jinadasa Liyanaratne, Gerrit Jan Meulenheld. Karin Preisendanz, Burkhard Quessel, Anon Rosu, Karam Tej Singh Sarao, Sven Thomas. Ursula Weisser. Albrecht Wezler, Beverly Whipple, Dominik Wujastyk and Mci Yang; to them, as well as to all those unnamed, I here tender my heartfelt thanks: I am also grateful to the Welcome Trust for a travel grant which allowed me to consult some rare works in the collections of several libraries in London in 1987. Gerrit Jan Meulenheld and Alhrecht Wezler went through drafts of this study critically, making many pertinent and helpful comments; I am particularly indebted to them. Stefan Leder and Jiirgen Paul checked my translations from Arabic texts and pronounced them to he in Ordnung: their unselfish help is much appreciated. My thanks are also due Messrs. Motilal Banarsidass not only for agreeing to publish my study, hut also for waiting patiently for several years for its completion.

In this book I also touch upon the subjects of ejaculation and orgasm. Just before its completion I came across a New Age publication* — with interesting information, hut hardly describing traditional Tantrism as it claims to do — which very decidedly makes a distinction between ejaculation and orgasm of the male.” What it means by the latter, though, is intense pleasure due to prolonged sexual activity on the very brink of ejaculation which latter is however restrained. I am not sure whether terminologically this too qualifies as an orgasm. On the other hand Ladas/whipple/perry pp.153 159 too refer to male orgasm even multiple not necessary not necessarily linked to ejaculation. It is unclear to me whether what they are referring to is the same as what van Lysebeth describes. If not then it still seems to me not be vary relevant to my study as it is a technique which is described as having to be actively learnt this can thus hardly pertain to the ordinary course of events.

The matter is different in the case of the female. According to Stifter pp. 11:156 orgasm and ejaculation in this case may no concide though they seem often may be usually to do so provided ejaculation takes places at all in any case I have refrained from going through what I have written with a view to amending references to ejaculation and orgasm of the male and in the given context more important the female should I inadvertently have mixed up my terminology I beg to be pardoned.

Though I have a number of times compared my findings with those of other traditional medical systems I was unable to really delve into any of them. I sicerely regret this especially in the case of Tibetan medicine which has very close parallels to the Indian notions examined here as even a cursory glance shows but also differences.

to all international destinations within 3 to 5 days, fully insured.
Sample Pages 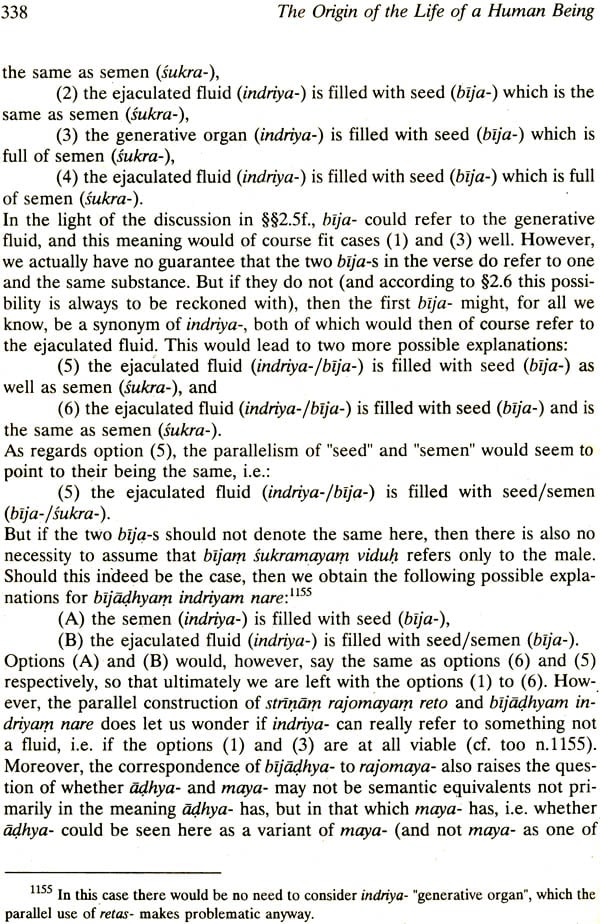 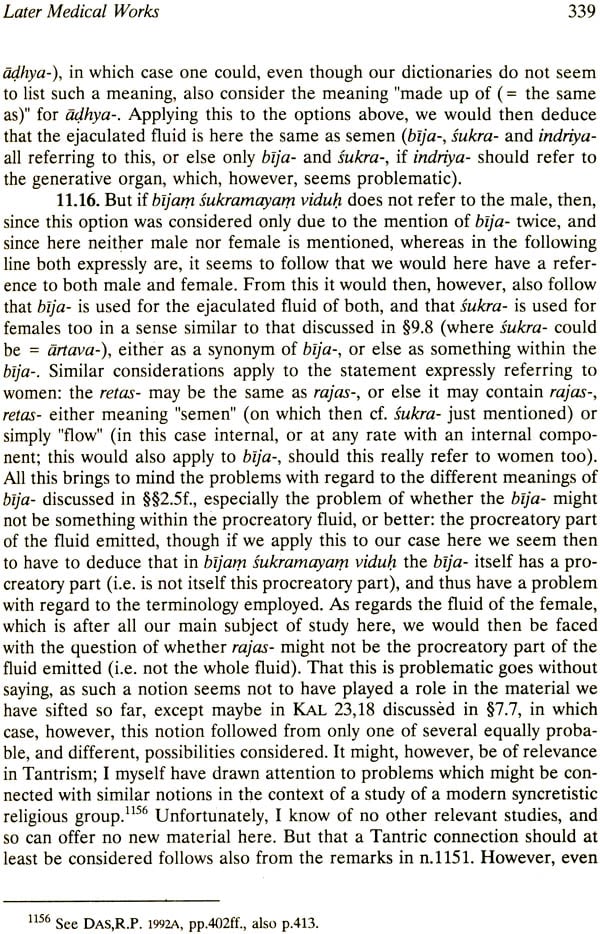