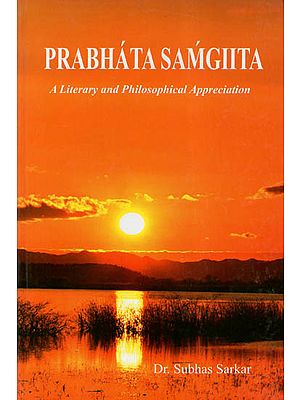 $35.00
Notify me when this item is available
Save to Wishlist Send as E-card Share by Email
Foreword
"Ganat parataram na hi", proclaimed our ancient sage. That is to say, "There is nothing greater than song". In the West, the great composer Beethoven said, "Music is the mediator between spiritual and sensual life." Bengal is the land of songs and music of different varieties, meeting different situations of life from a person's birth to their death. In this beautiful land of ours, thousands of songsters and musicians fill the air with vibrant music in the lowly cottages of the poor, as well as in the luxurious palaces of the rich. Here, folk songs coexist with the songs of cultured people. Our land boasts music composers ranging from Jaydev to Rabindranath Tagore and a host of others, whose works transcend time and space. To this memorable list of songwriters is now added the name of Shrii Prabhat Ranjan Sarkar, with whose excellence in the domain of music this well-researched book, "Prabhata Samgiita: A Literary and Philosophical Appreciation" by Dr. Subhas Sarkar, is connected. An elaborate introduction written by Professor Ramaranjan Mukherji enhances the importance of this pioneering work.

Shrii Prabhat Ranjan Sarkar is a spiritual leader known as Shrii Shrii Anandamurtijii. The institutions founded by him cater to the spiritual and material needs of the people irrespective of caste, color or creed. He has been a versatile writer, writing on diverse topics. His PROUT [an acronym of Progressive Utilization Theory] social philosophy has created a stir among the thinking public. However, like many god-men Anandamurtijii has created many controversies.

Introduction
A poet does not suddenly appear in the field of literary art, nor does a literary thought emerge all of a sudden. There is continuity in the chain of ideas, and there is a tradition which is inherited by all literary artists. Indian Seers first started carving out their poetical paintings in the morning of humankind, and the thoughts projected by them are contained in the miniature word-paintings contained in the Samhitas. The craving of eternal humanity for Truth, Beauty and Bliss - our unending aspiration to have a taste of Bliss, associated with the Infinite - starts its journey from the period of the Samhitas and winds its course through the Upanishads and Epics, the specimens of literary art and systems of philosophy. This eternal longing ultimately appears in the writings 45f literary artists and philosophers of the contemporary period, like Sri Ramakrishna and Vivekananda, Tagore and Sri Aurobindo, and finally in Prabhat Ranjan Sarkar, who has fully imbibed the Indian tradition of spirituality and has tried to rescue the Supra-sensuous from the morass in which it has found itself sunk due to the onslaught of the sensuous and the physical. The lyrics of Prabhat Ranjan Sarkar represent the final results of the confrontation between the sensuous and the Supra-sensuous, the physical and the Supra-physical, the material and the spiritual - the confrontation in which the Supra-sensuous and the spiritual have always come out victorious. To make a real appraisal of the poetic talent of Shrii Prabhat Ranjan Sarkar therefore, it is necessary to make one acquainted with the Indian spirit - the mind of India as reflected in the Upanishads and subsequent writings of literary artists and philosophers.

This proposition relating to love leads us to another serious problem. The Absolute is described as a conglomeration of contradictions. It does not move, yet at the same time it pervades the entire universe; it does not have any colour, but at the same time it is able to induct diverse colours in the universe; it does not have any purpose of its own, and at the same time, it fulfills the purpose of the entire world. It is not possible to describe the glory of the Absolute with the help of expression, because it is inexplicable and unknowable; at the same time, one who is gifted with a vision of this Grand gets oneself submerged in the ambrosia of sublimated joy. These contradictions, which are repeatedly mentioned in the Upanishads, appear puzzling to the modern mind their solution can be obtained only in the proposition of love, because love alone has the capacity of bringing under its majestic canopy irreconcilables and contradictories. In ordinary life, in all the deeds and exercises of humanity, there is a great gap between sacrifice and profit-making, because they represent two opposite poles. Under the light yoke of love the concept of donation and the concept of profit-making are brought together because one's sacrifice turns into an expression of love, and consequently, also benefits oneself. This is possible because - as described by Indian philosophers - the universe is a creation of God through love.

Monism on a solid foundation, the great Shankara has commented on the Upanishads that represent the later strata of Vedic literature, trying to unfold the mystery of the universe. It is amazing that after a period of total surrender to the gods and of propitiating the gods through sacrifices and presentation of bounteous gifts, the Upanishads conduct us to an arena in which humanity asks questions in regard to its own identity, and after a vigorous search comes to this conclusion, that all human beings happen to be the children of Immortality. It is astounding that while in the age of the Samhitas, we find helpless humans seeking favours from the deities, in the age of the Upanisads, we find strong and robust human beings bubbling with energy and enthusiasm, trying to solve the riddle of the universe. We find Maitreyii praying to the supreme divinity to conduct her from the land of Darkness to the land of Light, from the land of Untruth to the land of Truth and from the land of Death to the land of Immortality. This happens because when human beings pass from the age of the Samhitas to the age of the Upanishads, they become mature. In this stage, they are able to replace sacrifice by concentration and contemplation, to replace weakness by boldness, to substitute hunger for physical satisfaction with a thirst for the waters of spirituality, which alone is in a position to transform the physical human mould and quality and change the human character completely. It is this thirst for the waters of spirituality that manifests itself in a pronounced manner in the lyrics of Shrii P. R. Sarkar, who has restated the eternal cravings of the human mind, as identified by the seers of the Upanishads.

A scholar having deep penetration into all branches of English literature, and also Indian and Western principles of literary criticism, Prof. Sarkar has contributed richly to the field of western criticism through his projections and literary writings. Professor Subhas Sarkar is both philosopher and essayist, literary artist and critic, and consequently, he is in full possession of the equipment necessary to analyze the magnificent lyrics of Shrii P. R. Sarkar and present the result of the analysis to the academic world. In this work, Professor Sarkar has thrown light from different angles on the lyrics of Shrii P. R. Sarkar. He has analyzed this great poet of India by applying different yardsticks and by trying to extricate hitherto undiscovered meanings and implications. This analysis of the lyrics of Shrii P. R. Sarkar, thus, has come out as a profound source book, a work essential for penetration into the lofty philosophy broached by Shrii Sarkar in his lyrics.

I congratulate Professor Subhas Sarkar and bow down to the God grown in him. I offer my respectful salutations to the memory of Shrii P. R. Sarkar, who, I believe, is an embodiment of India's tradition of knowledge, and extend a warm welcome to the book. 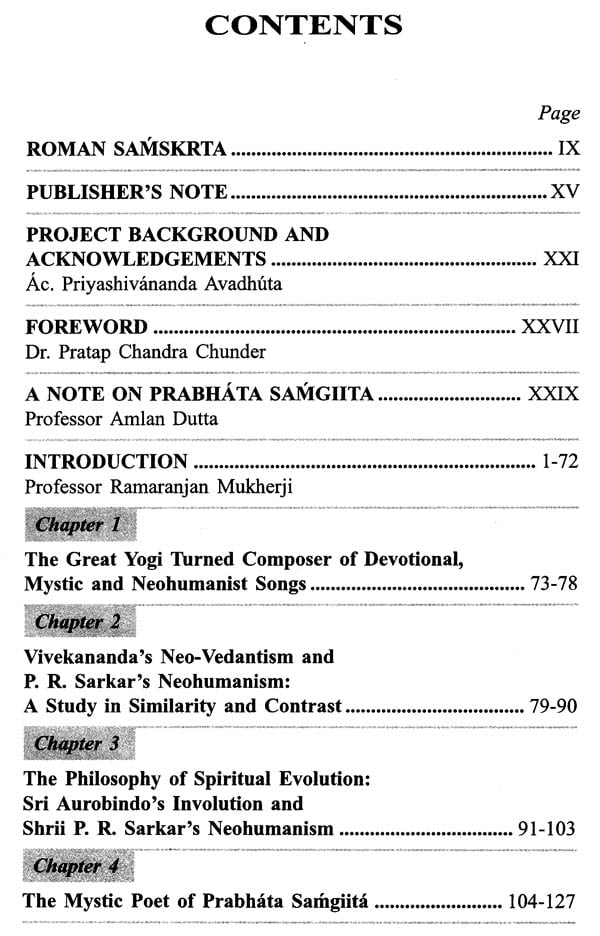 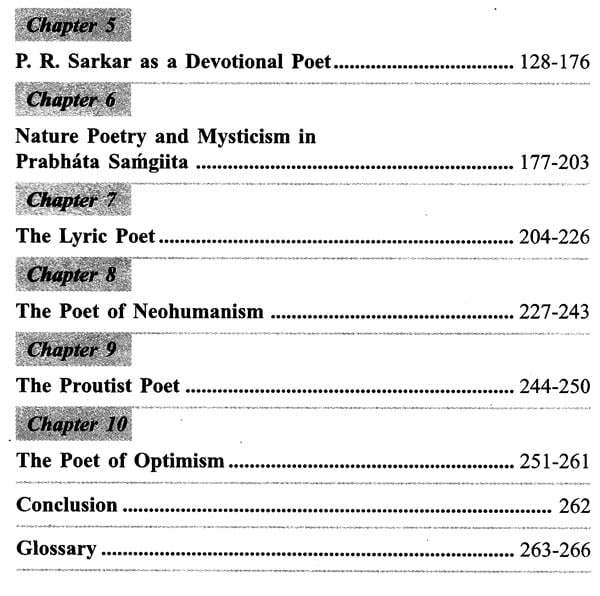 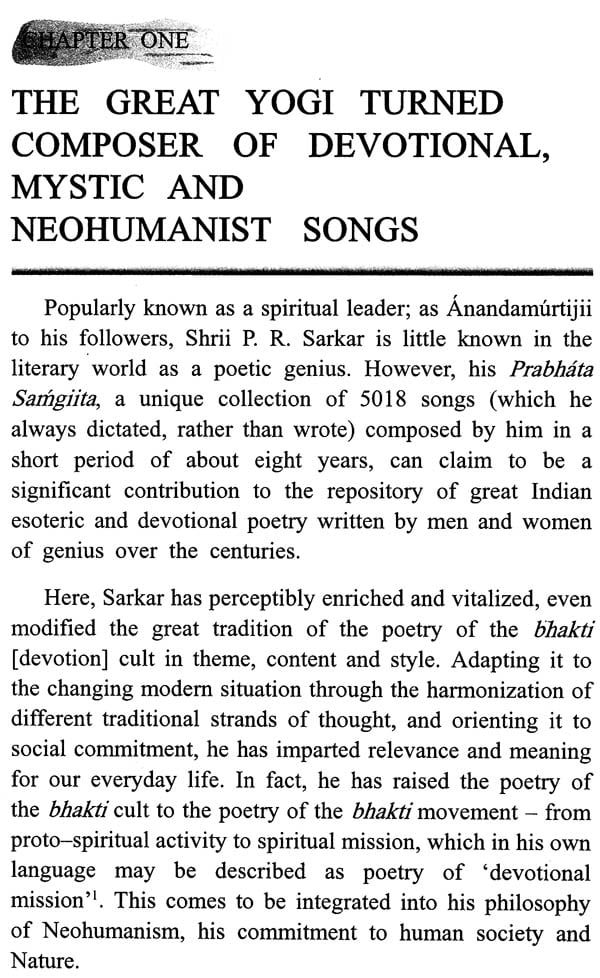 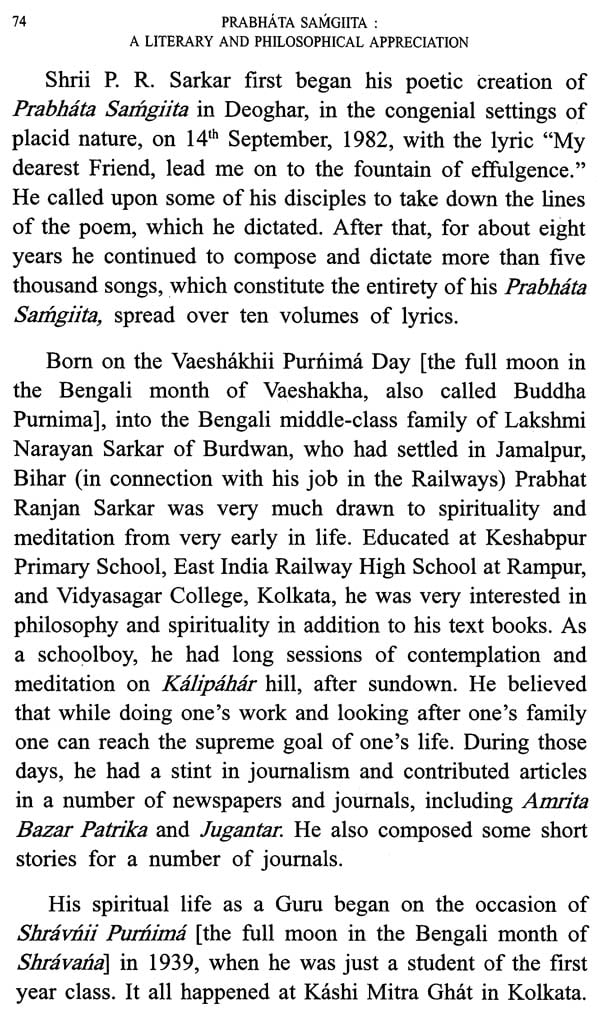 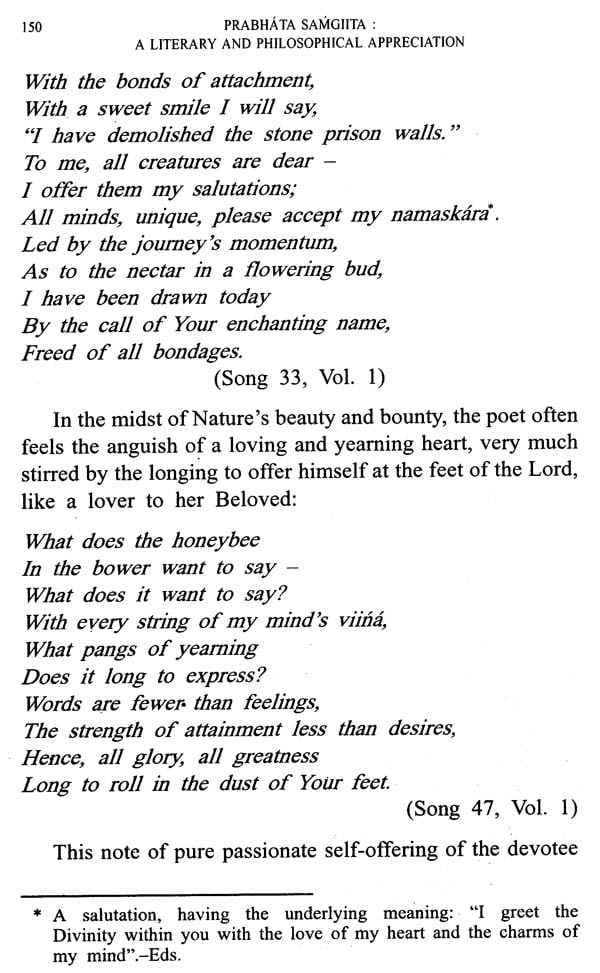 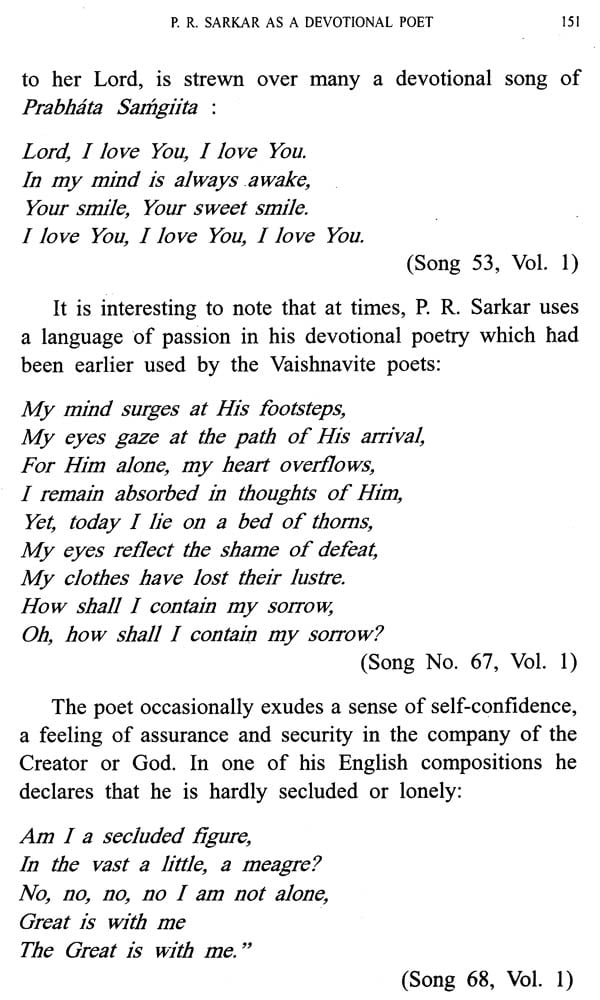 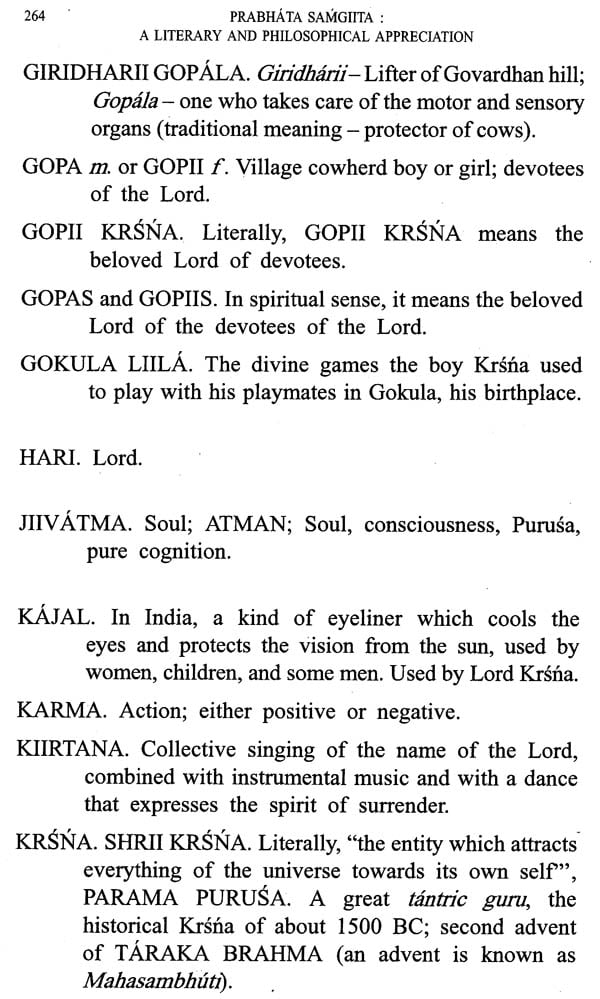 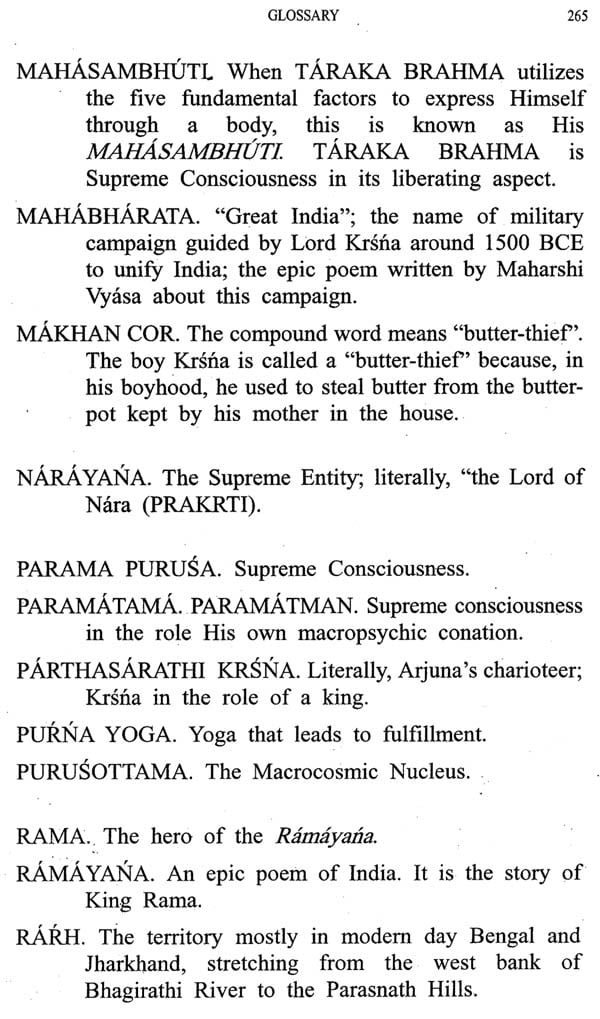 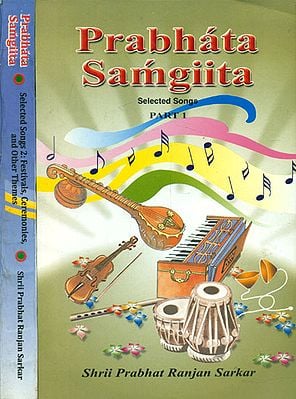 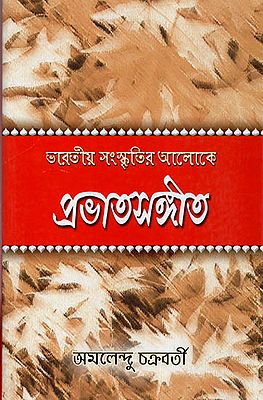