THE PRAMANAVARTTIKAM OF ACARYA DHARMAKIRTI 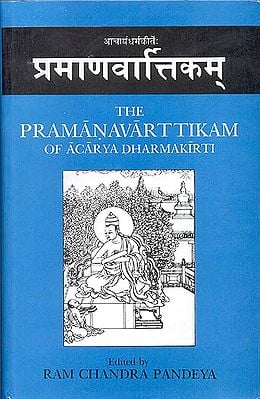 $40.00
Notify me when this item is available
Save to Wishlist Send as E-card Share by Email
About the Book:

Pramanavarttika is one, rather the principal one, of the seven celebrated works of the great Buddhist logician Dharmakirti (c. 650 C.E.). It consists of four chapters treating respectively of the validity of knowledge (Pramanasiddhi), perception (Pratyaksa), inference for oneself (Svarthanumdna) and inference for others (Pararthanumdna) according to the version followed in the present work, though in the traditional order Svarthanumana comes first. It is written in mnemonic verse and contains approximately 1500 stanzas.

The present volume includes Dharmakirti's basic text together with two commentaries: one, the auto-commentary of the author on the Svarthanumana-pariccheda only which is the first in the traditional order and third in the order followed here, and the other, the Pramanavarttikavrtti by Manorathanandin on all the four chapters. The incomplete auto-commentary supports the theory that the traditional order of the chapters was the original one and that death prevented the author from completing his commentary on the rest of the work.

Dharmakirti defines valid knowledge as the one which is not contradicted by experience and makes successful activity the test of truth. Perception, according to him, apprehends the own-characteristic (svalaksana) of things and inference the common characteristic (samanyalaksana). All inference are based on either a characteristic of identity (svabhava) or of causality (effect or karya, which leads to the knowledge of the cause). Inference for others is communicating the three characteristics of a valid middle term to another person and it is of three kinds: 'own nature', 'effect' and 'non-perception' (svabhava, karya and anupalabdhi).