The Queens of Hastinapur 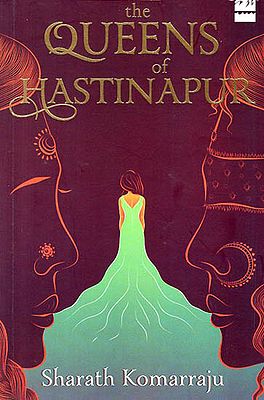 This is the story of Ganga, Madri, Pritha and Gandhari: women of the Mahabharata who, driven by their fears and ambitions, trigger events that lead to, gr and warriors towards glory and bloodshed, sin and redemption. ‘What came to an end at Kurukshetra took reot in throne rooms and bed chambers, hermitages and sacred lakes, prisons and shrines, on horseback and under the stars. The immersive, gripping retelling of the Mahabharata through the eyes of its female characters reveals how fates are sealed and destinies altered when women begin pulling the strings.

Sharath Komarraju is an author of fiction and non-fiction based in Bangalore, India. His best known work is che Hascinapur series, written in the voices of che Mahabharaca’s many women characters. His first novel, Murder in Amarvavati, was longlisted for the Commonwealth Book Prize, 2013. Once a software engineer, he now tells stories full rime. When he is noe writing or reading, he can be found warching cricket on televisian, talking to his wife, ar munching on the nearest chocolate bar.

The bare White Rock against which I sit, which rises up to touch che clouds, breathes a chilling current of air down my back. My haoded black cloak - once all chat I needed co protect me from the elements ~ is now damp, its coarse cotton giving way at the seams under the arms. A gust of wind runs up the mountain, turns Yudhisthir’s lifeless body a darker shade of blue, and nibbles at my shrivelled white hair.

I have been speaking for long, now, yet the tale of the great war is but at its very beginning. My body withers with each passing moment, and soon J shall lie down next to Hastinapur's High King and shut my eyes. But before that, | muse make certain chat the entire song passes my lips, for if the light once departs my body, the story of the Meru people and the battle of Kurukshetra shall forever remain untold.

Sometimes I wonder if anyone hears me here, for I see no bird or bee or Gower or tree — just the falling snow and the endless grey of che overhead skies. Perhaps all that I say here is in vain; perhaps my voice speaks just to the lifeless crags among which the Pandavas lie dead; perhaps even if | were co trick death long enough to narrate my tale, it shall never be uncovered.

If that is so, perhaps it is best that I lie down right now, and surrender to the weight of my eyelids ...

1 Jean forward on my seat to feel Yudhisthir's bactle-hardened palm; even after all chose years of peace, his hands bear the marks of war, With the sleeve of my cloak I clean che sleet off his hand, and co my utter surprise J sense his lingers tremble slightly, and then they wrap as one around mine. I watch the rest of his body for other signs of life. but there are none. His lips had already blackened, as though they had been dipped in the venom of hell. His eyelashes are freckled with ice.

But his trembling touch has given me my answer. Even if my listeners are lifeless rocks, ] must go on, Even if my words are destined to lay forever buried under carpets of snow, 1 must go on. Even if they freeze in this air for a while, I must believe there will come a time — in the far future, perhaps - when summer atrives and melts chem into life once again. Even when I see no hope, I must find some, deep within me.

So I hold on to Yudhisthir's hand and will myself to resume. ‘The hands of man yearn to grasp. His fingertips are born with che innate knowledge that they must cuc] around whatever they touch. To sate his hunger he kneads the nipples of his mother. As he begins to move about on all fours, he reaches for objects chat catch his eye: he touches, he feels, and those that he likes, he clurches to his bosom. When he learns ta walk, he holds the hand of his elder for support; when he is old enough to love, he sends out his fingers again, eager, gtoping, inta the dark in desperate hope. He makes food for himself by guiding the path of che plough, and he makes the plough itself by felling crees with an axe, whose blade he forges from black iron extracted from the Earth’ breast - all by means of his hands.

‘The mind of man yearns to grasp. Deep within it is 2 well of unslaked thirst that drives him forever on, asking questions of the Goddess, digging her for secrets, and when the Goddess answers each of his queries with a thousand of her own, he soldiers relentlessly on. He picks up each one of the puzzles at once, turning it over in his head, certain that he shall one day unravel them all.

The mind of man is also besotted with lust - for power, for wealth, far status. [ts tendrils are akin co those of a ravenous spider spinning an infinite web. There is never a moment when it is still. It is always teetering on the edge that separates instinct from thought, clawing, feeling ...

The soul of man yearns to grasp. From the time he gains consciousness, he is aware of two worlds char he at once inhabits: one outer world that seems co run of its own volition, oblivious to his whims and thoughts; and one inner world where he reigns supreme, where his word is decree, where there are no arguments to face, no wars to fight, where there is peace at every corner, where love and forgiveness bloom on every tree. Bur this inner world is locked in eternal combat with che ourer, and his soul longs to shape che lacter in the image of the former.

This yearning is the reason for all of mans most towering achievements. Without it, would we ever have cubbed together two stones on a cold winter's night? Would we have written the book of mysteries? Would we have cold each other tales of wars and triumphs and defeats, caught our children to be good, fed the old and weak, respected the dead? Would we have made love, passed on our memories, kindled chis flame of hope in our hearts?

And yer it is this same yearning thar brings out the worst in man. The same hand that guides the plough also grabs at the hilt of a sword. The same mind chat lusts for knowledge and wisdom also yearns for revenge, for power over another. The same soul that acknowledges the free existence of che outside world seeks to bend it ~ by waging wars, by placing curses, by enslaving kingdoms.

The journey of a priestess is not to escape this desire co geasp and co mould — indeed, none of us can — bur to realize its futility. The march of creation is inexorable. The sweep of time extends thousands of years into the past and into che future. The life of une man — and the life of one race — is but a blink of the Goddess's eye. An age is bur one heave of the Goddess's chest. All of che thoughts that have occurred in all human minds through the epochs are contained within the Gaddess's one heartbeat.

This notion, then, that we control the course of history is buc an illusion. I told the Wise Ones on the mountain chis on the day Pritha and Gandhari were betrothed in Hastinapur - that we must stay away from Earth from now, allow the Goddess to exert her will in her own patient, invisible manner — and they nodded.

Yes, they said. The Lady of the River speaks well. We have meddled enough in Earths affairs. Let us now turn our gaze inward, and bow to the will of che Goddess.

But itis che greac folly of men - even the wisest of chem — that they think they know the Goddess’ will. They can see into her mind, these men claim, forgetting that her mind holds the entire known universe within ic. They have spoken co the Goddess. they insist, forgetting that she has no mouth with which co speak or scream. Perhaps this is why she has so many who speak on her behalf - these men who are but mere mites of dust by her feet. They can claim to know her because she is unknowable. ‘They see her form because she is formless. They speak her words because she never does.

And so it is with Meru's Wise Ones. Not so much as a moon had passed after the weddings in Hastinapur when I wenr one morning to the Crystal Lake to pay my respects. It was. a morning like every other — until it was not. 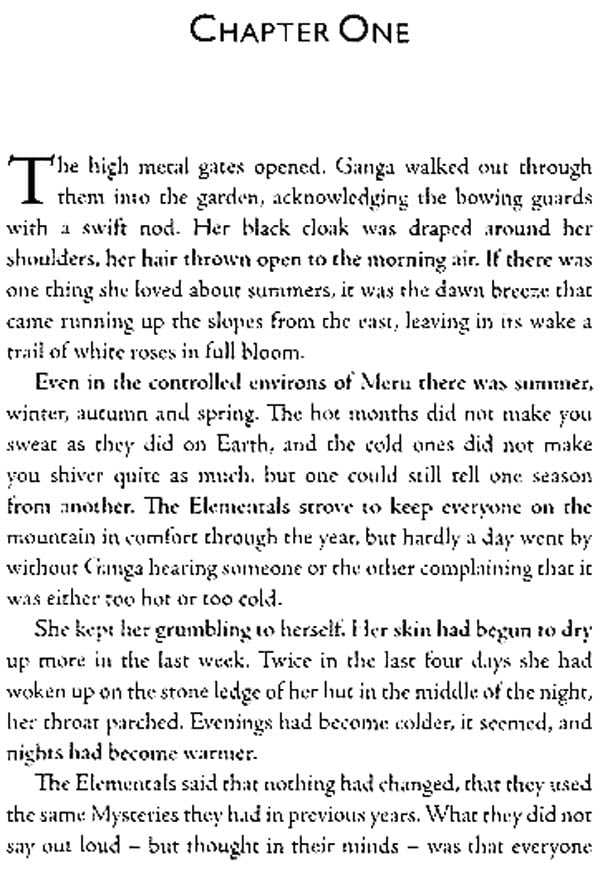 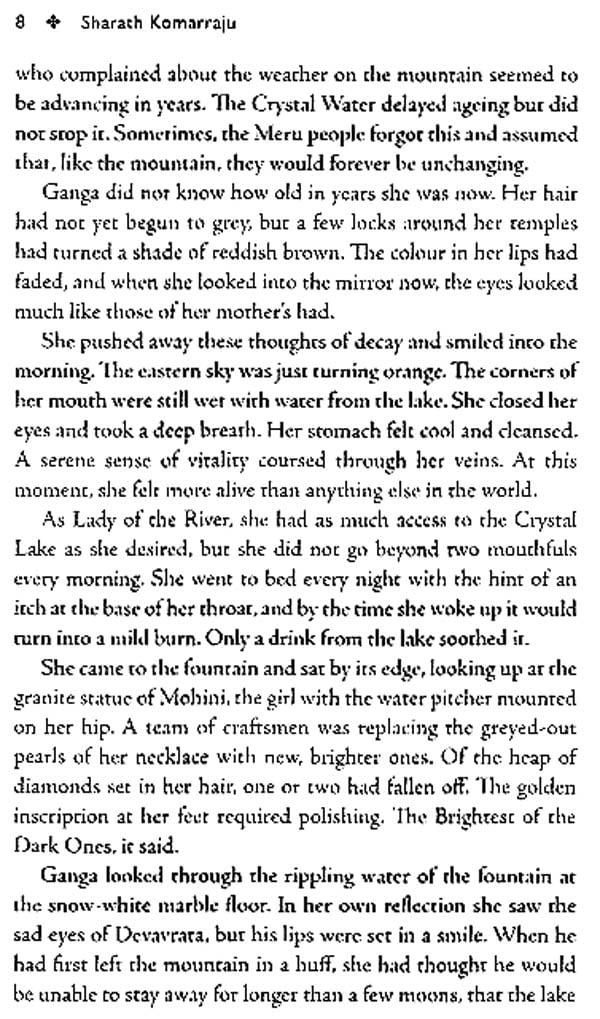 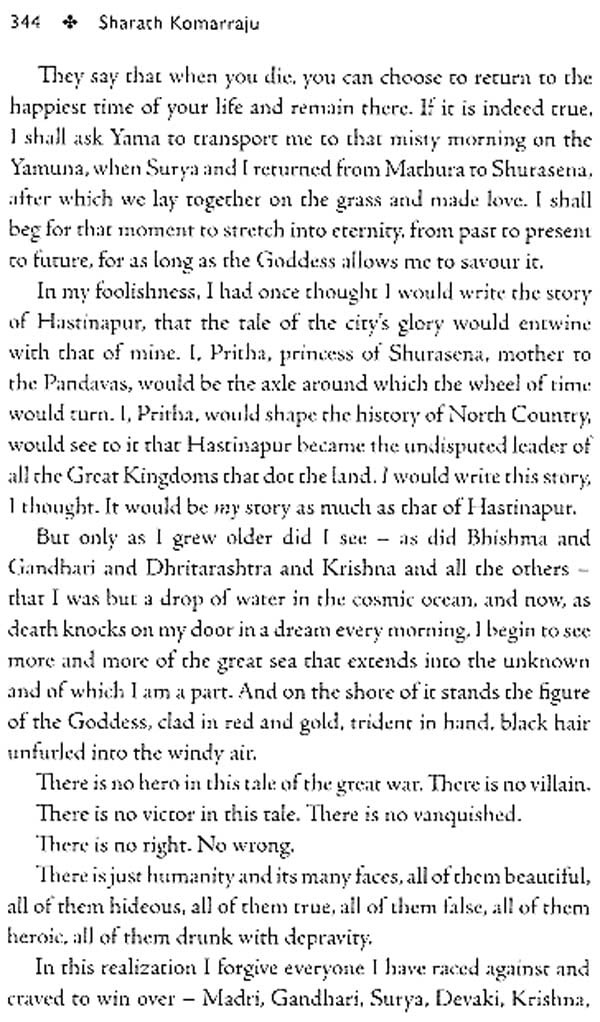 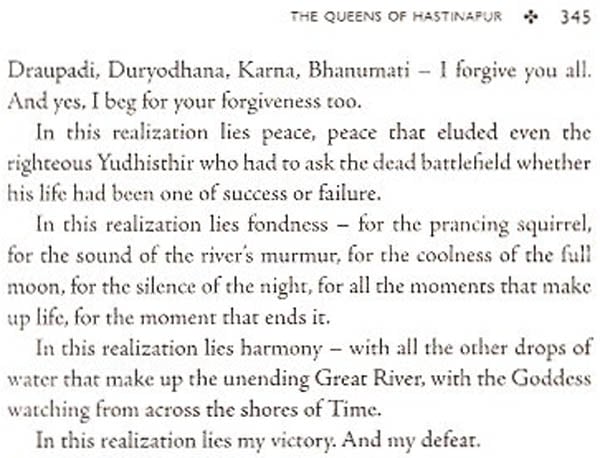