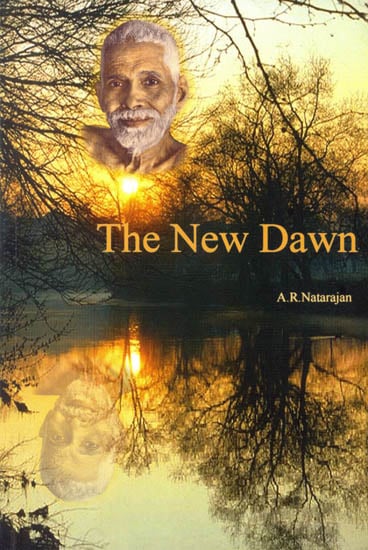 The immense potentiality of the Ramana Way is not yet fully recognized. First and foremost it restores our confidence in ourselves. Over and over again Ramana would emphasise that the mind is by nature ever pure and uncontaminated. All weakness of the mind is attributable to habit.

As for happiness, it is natural, inherent. Being nature it is universal property, accessible to one and all if effort is rightly directed to be aware of it. There is no vagueness about the gole or the means. The goal is the discovery of one’s true nature as happiness, discovery of the direct; self-enquiry.

As one treads on the Ramana path the mind works in all cylinders. One is energized all the time for there is no dissipation of its energy though purposeless thoughts. Unconscious power is there as an undercurrent enabling one to be tentative, detached, while at the same time being totally involved in the job on hand or while reading to people. In the transformed life everything is clothed with the Lord’s beauty. The mind is floating in bliss and the heart is overflowing with love.

The purpose of this book is to focus attention on the practical aspects of the Ramana Way for handing the mind and to understand it. A wide range of topics are covered in the twenty three reflections on the beatitude of a unitary mind and the natural state of happiness.

The immense potentiality of the Ramana Way is not yet fully recognised. First and foremost it restores our confidence in ourselves. Over and over again Ramana would emphasise that the mind is by nature ever pure and uncontaminated. All weakness of the mind is attributable to habit. As for happiness, it is natural, inherent. Being natural it is universal property, accessible to one and all if effort is rightly directed to be aware of it. There is no vagueness about the goal or the means. The goal is the discovery of one's true nature as happiness, discovery of the alert silence of the pure mind. The way indicated is direct and is only one. It is inward, from the fragmentary mind and its variety to unity and fullness of the spiritual heart. First the outward mental movements towards objects is checked by focusing attention on the 'I' and then that attention is switched on to a search for the source of the 'I' and finally on the Heart and its abundance.

There is only one common remedy for all ailments. It is to revive the spirit of enquiry which is there in each of us. The energy of self-enquiry is to be harnessed to enquire about the mind, about the 'I, the subject. If practiced with vigilance this enquiry would have a snowballing effect. For it would set in motion a revelatory process ending in one becoming aware of his essential nature. Here it must be pointed out that one does not become different. What happens is awareness of ever-existent truth which was hidden because no enquiry was set afoot to know it. Viewing it in another way it is like looking for one's glasses which are on one's nose, or a necklace around one's neck or a sheep on one's shoulders. One imagines the loss until the truth is pointed out.

In order that we may enjoy the beatitude of the Ramana Way, in the quote referred to earlier Muruganar is inviting us to join him on a trip to the holy land of Ramana. He tempts us. It is a land of mukti or liberty. Liberation from what? From hitching our happiness to dame fortune, to people, circumstances, to ideas and what not. He promises freedom, from illusion which has enchained us in a vortex of desires and fears. If we do not lose sight of Ramana who is our only sure guide on the path, we would be experiencing the natural state of joy and silence of the mind. We would behold 'All heaven's splendour'. The bright sun of knowledge would be falling on every deed of ours.

Though we have been busily active all the time what have we to show for our efforts except an uncontrolled mind, fleeting happiness and a life which would sometime be like a "yawning pit of hell"?

Mariana’s words flow from the authority of his experience, from the state of Self-awareness which Ramana had bestowed on him. What he is writing about is not a creation of the mind. It is that which can be discovered "by cutting aside the time barrier, and being rooted in the 'Now'. It is an to which we are total strangers because we have forgotten it. We need to be woken up from our long slumber of ignorance of our own nature. Muruganar becomes passionate in some of his verses and in his eagerness to persuade us to undertake the vital journnegative labels on the 'world and its ways'. It is time that we do look at ourselves and our lives which keep moving towards the inevitable death of the body. What indeed have we achieved? If we remove our blinkers would we not recognise that it is precious little indeed? Why then should we not hasten to join Muruganar in his journey to the holy land of Ramana?

All that one need do to be steadfast on the journey is to keep stoking the fire of enquiry and be vigilant to the birth of thought. For thoughts proliferate into a jungle unless one is attentive to their birth.

Once when Ramana was living at Skandasramam he and other devotees saw a small moth coming out of a tiny hole. In no time the whole sky was overcast with moths. Ramana told the devotees present that this is how thoughts multiply instantly when attention is not paid to the birth of the first thought. When a single thought comes into the mental horizon a series of associated thoughts gather distracting one's attention away from the present. It is like a swift monsoon current forcing one to "run with the running mind". The only way out of this whirlpool of thoughts is to understand the mind's nature by enquiring about it.

On July 17, 1897 when Ramana was gripped by an unaccountable fear of imminent death he enquired with passionate intensity into the question of death of what it is that dies. He later labeled this enquiry as Who am I? Enquiry. Though his body was stiff and ready to be taken to the cremation ground he could feel the full force of the true' as the divine current. He thus discovered that 'I' is a divine force or current working independently of the rigidity or the activity of the body.

To help us on the path Ramana has shared the secret of his experience repeatedly. It is that the divine current surges in the spiritual heart located in the right side of the chest. He thus cuts across the need to wander here and there by specifying its location. If one is on the trail of the mind enquiring 'Whence is the mind?' that would surely lead one to the Heart, and a conscious linking with the divine current would take place. One would have bid good-bye to all mental concepts and limitations.

Nowadays life is a mad rush, full of competitive compulsions, thick with media propaganda. In the crosscurrents of these dynamic influences self-enquiry and the understanding of the mind's true nature provides an undercurrent of 'solitude' amidst all this turmoil. Hands are at work but the head is cool, powerful and always aware of the overflowing bliss in the heart. An "unhurried and recollected life" ends the distinction between meditation and action, for one would never be out of the meditative mood.

While inviting us to join this momentous journey Muruganar assures us that Ramana is with us from the beginning to the end.

A rare, unlooked for guest he came;
Right in he came, of his own accord,
This Venkata, Lord of my own self.

Receptivity to the presence of Ramana is of utmost importance. It is true that the guru's sole concern is the welfare of his disciples and devotees. Even so one should not take it for granted. Conscious effort to be linked to that all pervasive and ever-flowing grace enables one to be in tune with that. As long as the sense of individuality, of separate identity of 'I' is there, we have to make the effort to be vigilant in self-enquiry and to be aware of guru Ramana's guidance.

In this context the need for prayer and surrender assumes significance. While practicing self-enquiry, one is battling with the past as thoughts. Sometimes negative and debilitating thoughts may result in a veritable holocaust, scorching and destroying a person like an erupting volcano. One would then be reduced to a state of utter helplessness. In those turbulent times Ramana alone can rescue one from going under. Turning to him in humble prayer, recognizing his supreme power and unconditional love would enable one to lean on his strength and draw on his primal power.

As one treads on the Ramana path the mind works in all cylinders. One is energized all the time for there is no dissipation of its energy through purposeless thoughts. Unconscious power is there as an undercurrent enabling one to be tentative, detached, while at the same time being totally involved in the job on hand or while relating to people. In the transformed life everything is clothed with the Lord's beauty. The mind is floating in bliss and the heart is overflowing with love. 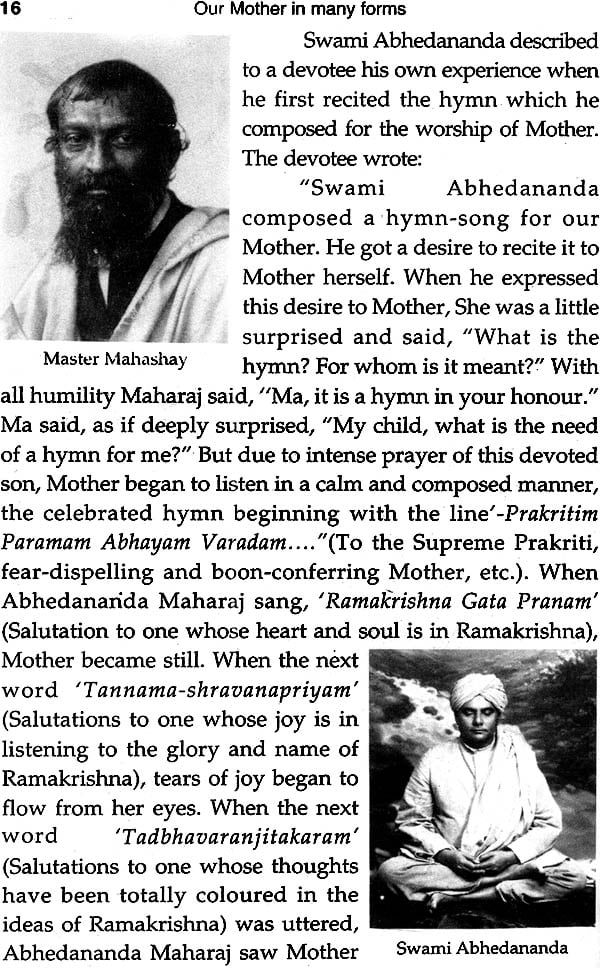 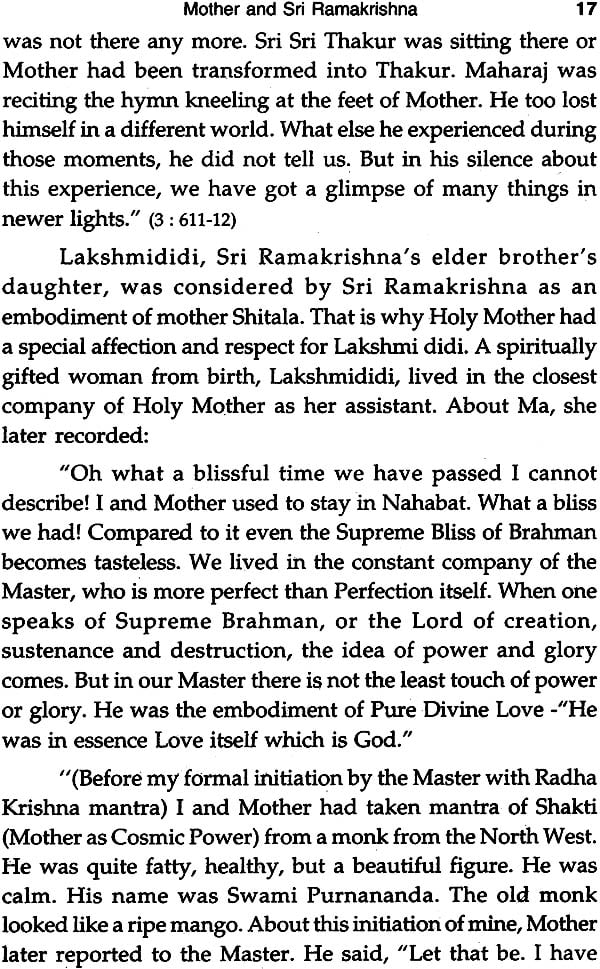 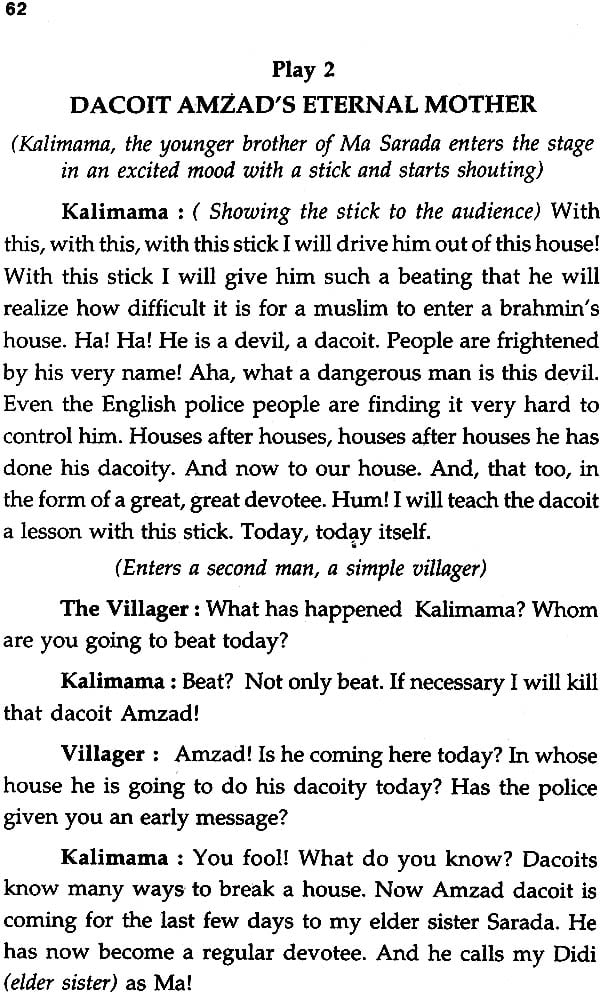 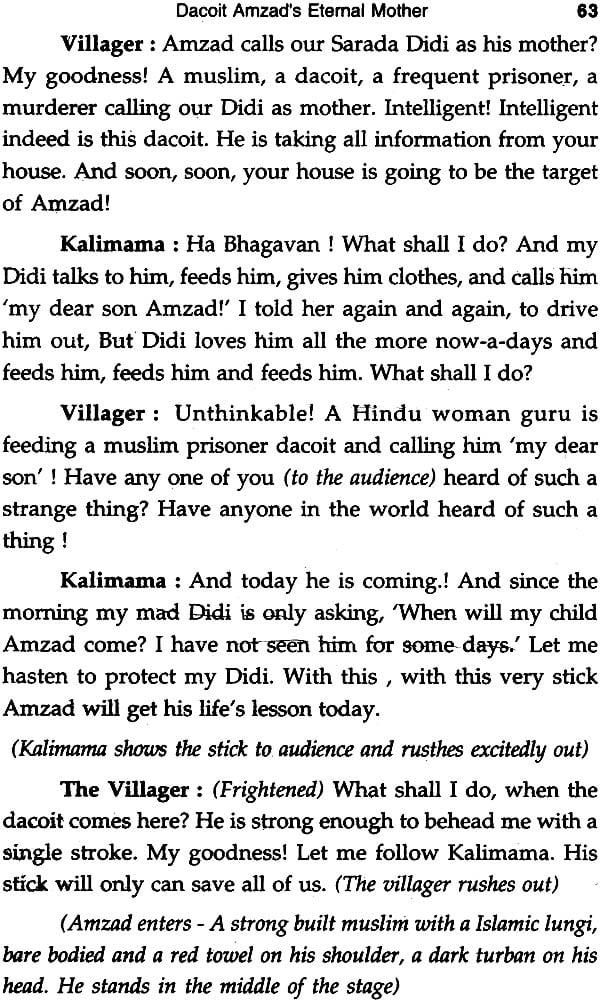 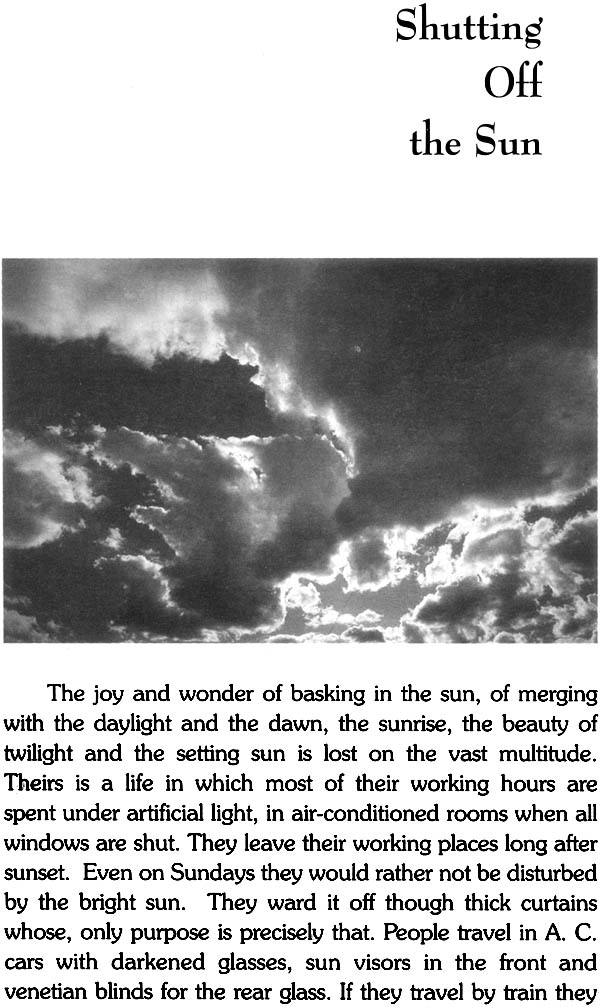 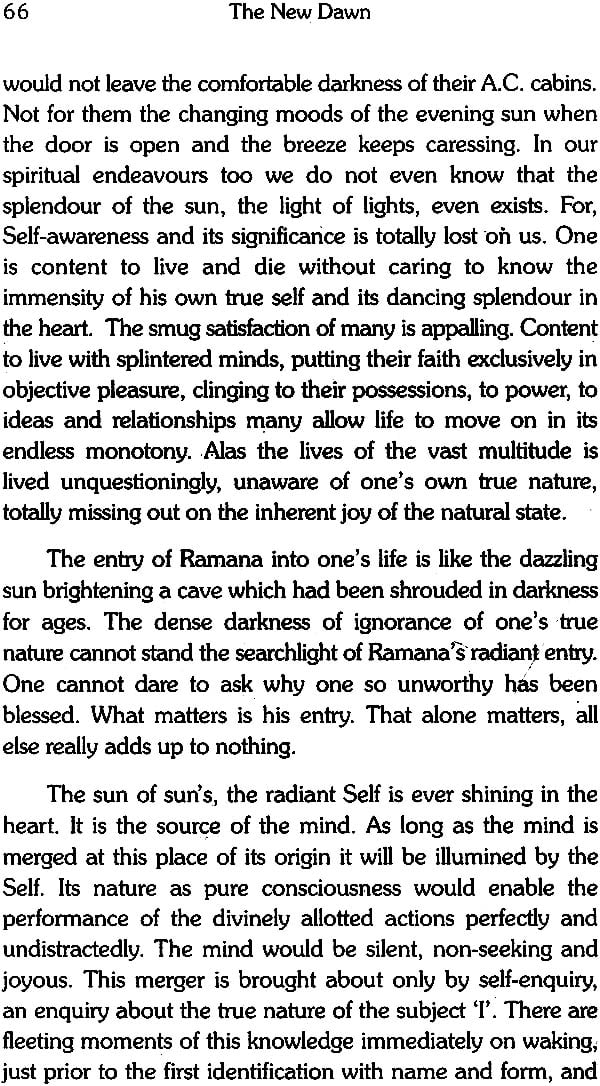 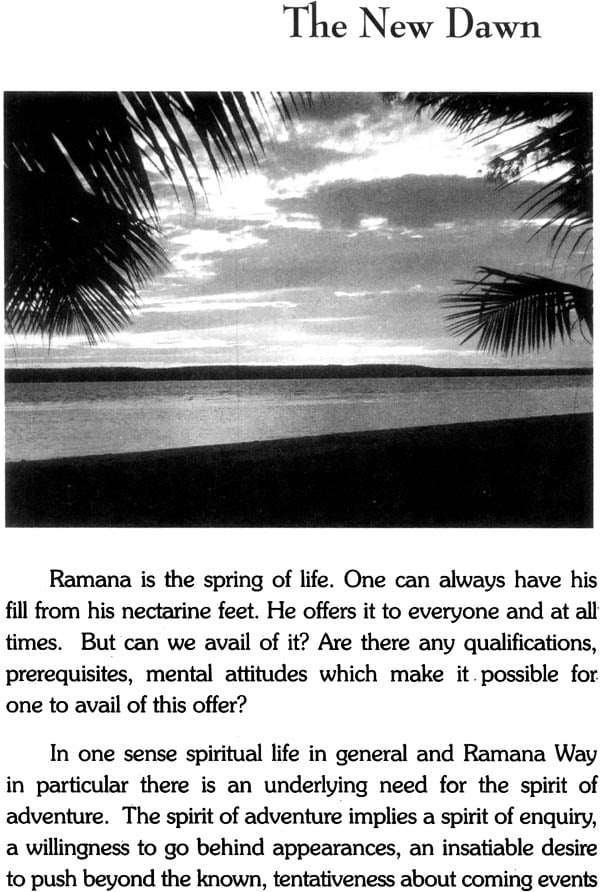 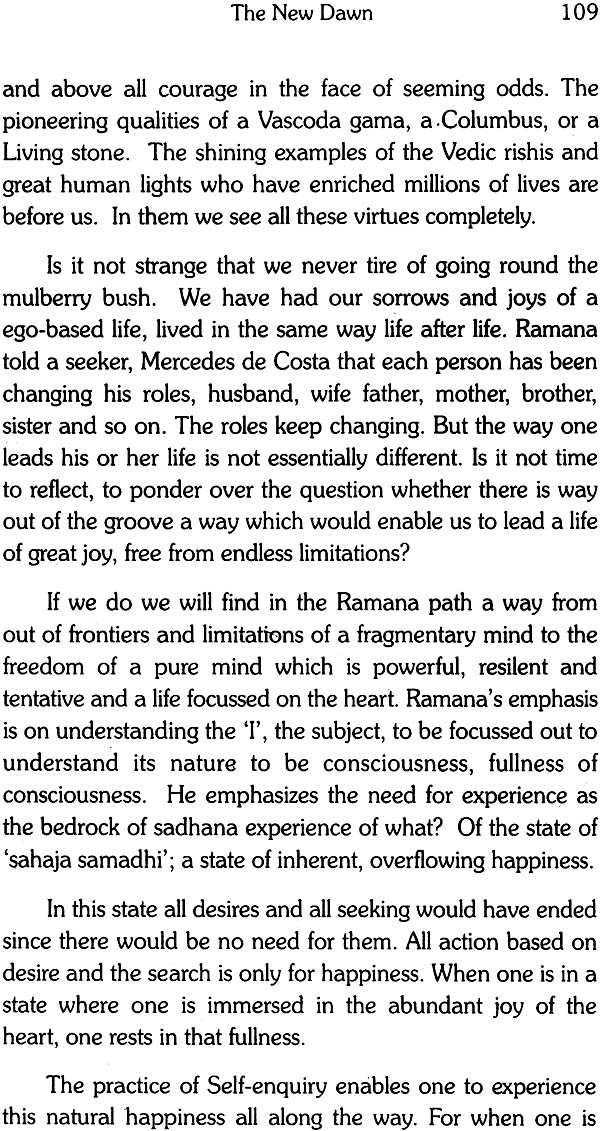 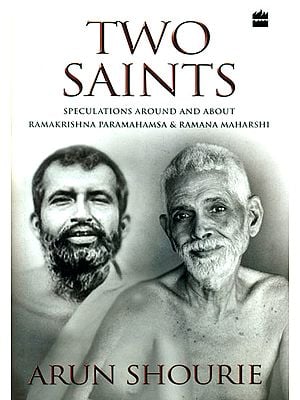 Two Saints (Speculations Around and About Ramakrishna Paramahamsa and Ramana Maharshi)
By Arun Shourie
$34.50
FREE Delivery
$46  (25% off)

Blueprints for Awakening - Rare Dialogues with 7 Indian Masters on the Teachings of Sri Ramana Maharshi in 2 Volumes
By John David
$54.75
FREE Delivery
$73  (25% off)