Ramayana is the first of the great epics of ancient India. It is written in the tradition of the Vedas, following the wisdom of those timeless Sanskrit scriptures. Originally, compiled by the sage Valmiki, it is famous as the Adi Kavya, or the original poem. Its origins are lost in distant antiquity, although followers of the Vedic tradition say it was first composed around 880,000 B.C. Of course, many modern scholars and scientists will undoubtedly take issue with that claim. It matters little, though, when it was written-Ramayana remains one of the most moving and beautiful stories of all time. It tells the history of Rama, a king who appear in the solar dynasty, the line descending from the sun-god Surya. Rama and his wife Sita are said by the Vedas to be manifestations of Vishnu and Lakshmi, who are accepted as the Supreme Person and His eternal consort. Rama is described as the seventh of the ten avatars, or incarnations of Vishnu, who appear in the current cycle of ages.

The book can thus be read on different levels. On one level, it is simply a wonderful story. For lovers of tales like Lord of the Rings, it is an account of fantastic happenings in a world of magic and mysticism, a world where humans lived alongside other, more powerful beings and where human society itself possessed knowledge of divine forces now unknown.

For those fascinated by different cultures, Ramayana graphically depicts the so-called Vedic age, a time when great warrior kings ruled the world, guided by spiritually aware mystics and saints. It was an age when men lived in the understanding that they were eternal souls, passing from life to life towards a state of final emancipation. Thus, the pursuit of virtue and truth was considered paramount, and human life was seen as an opportunity to attain spiritual liberation-freedom from the cycle of birth and death.

But for those who accept the divinity of Rama, Ramayana becomes a different affair. If Rama is accepted as God, then it may be questioned: Why does he appear? What is he doing as he moves about the earth, seeming to act exactly like an ordinary man?

Such questions are answered in the renowned spiritual treatise, Bhagavad-Gita, the Song of God. Therein, it is stated that God appears in this world for different reasons. He comes to establish religion and to destroy demonic elements in society, when they become too powerful. But, he also appears in order to reciprocate the love of his devotees. It is this last fact, which is most significant and which is said to be the primary reason for the Lord’s appearance. The Bhagavad-Gita explains that the Lord has no material purpose to fulfil when he appears. He is not acting in the same way as ordinary men, who are interested in material gains such as profit, fame, and adoration. Nor does the Lord have any political purpose. He is simply acting out of leave.

If Ramayana is studied with this in mind, it becomes an immensely profound and deeply moving literature. The various interactions between Rama and the other characters are seen in a different light-a light of divine loving sentiments that can to touch the very soul of the reader.

I shall leave you to judge for yourself. However, you view Ramayana, I am confident you will find it enjoyable and uplifting. I have read it at least a dozen times and am still finding great pleasure in reading it again and again. I hope you will also experience the same joy from this book.

Coursing through the sky in his celestial chariot, Ravana appeared like a blazing comet. His dark body shone with a brilliant aura. From his ten heads his reddish eyes darted about, scouring the mountains below. His twenty powerful arms hanging from his huge frame looked like five-hooded serpents. Seated on a throne of gems he directed his golden chariot by thought alone and it moved swiftly over the Himalayan range.

The demon was out on his conquests. All around him flew thousands of Rakshasas, clutching swords, barbed spears, spiked maces and iron bludgeons, all of those weapons smeared with blood. Some Rakshasas had the heads of tigers, some of donkeys and some of fierce fiends. Others appeared in their natural forms: large blackish bodies, fearful faces with tall pointed ears and rows of sharp fangs, with a mass of red hair on their heads. They wore iron breastplates studded with gems and were adorned with bright gold earrings and other shining ornaments. Surrounding Ravana they looked like dark clouds with lightning covering the sun.

Ravana wished to defeat in battle even the gods themselves. Wanting to establish his supreme power in the universe, he had gone to the higher planets and conquered hosts of Gandharvas and Yakshas, powerful celestial fighters. Now he was returning from his victorious fight with Kuvera, his own brother and the treasurer of the gods. That lordly deity had been made to retreat by Ravana, losing to the demon his wonderful chariot, known in all the worlds as the Pushpaka.

The fearless Ravana, overlord of all the demons, looked down from the Pushpaka at the forests below. It was a picture of tranquility. Amongst the trees were many verdant clearings covered with varieties of wild shrubs and forest flowers. Crystal waterfalls cascaded onto many coloured rocks. Lakes filled with lotuses and swans shone from the mountain plateaus as the hordes of Rakshasas soared overhead.

Sometimes the demons would see groups of rishis, ascetic brahmins who dwelt in those high mountain ranges, practising austerities and wor- shipping the gods. They would see the columns of smoke rising up amongst the trees from the sacrificial fires tended by the sages. Using their powers of sorcery the Rakshasas dropped down volumes of blood, faeces and urine, defiling the sacrifices. They would then hurl huge boulders and blazing' coals, crushing and burning the sages where they sat in meditation. Finally the demons would themselves descend, howling and roaring. They tore apart the bodies of the rishis, drinking their blood and devouring the it flesh. Ravana admired the Pushpaka as it proceeded according to his will. His brother Kuvera would be sorry to lose such a splendid vehicle. It looked more like a city of the gods floating in the air than a chariot. Numerous eat's-eye and crystal pillars ran along its sides, supporting golden mansions inlaid with coral. Large floors made entirely of gems stood upon gold statues of lions and tigers. Groves of artificial trees, shining with golden leaves and fruits, surrounded large ponds crowded with white lotuses. In those clear ponds stood ivory elephants and silver goddesses. Networks of pearls and wreaths of celestial flowers hung all over that car. It was encrusted with countless precious stones and emblazoned with gold carvings of wolves, sharks, and fierce bears. Sweeping through the skies it emitted the sounds of celestial music and the fragrance of the parijata flower, known only to the gods.

As Ravana sat idly aboard the chariot, gazing around at the magnificent scenery below, he suddenly noticed a lady sitting in meditation. This was most unusual. Women were rarely seen in those mountains. Sometimes the rishis would have their wives with them, but this woman seemed to be entirely alone. Ravana slowed the chariot and moved down to look more closely. Perhaps there were more ascetics nearby. The Rakshasas could use a little entertainment. And, if this woman was as beautiful as she seemed at first glance, so could he.

Ordering the Rakshasas to wait in the sky, Ravana himself rose up from the chariot and descended to the ground. He saw the young ascetic girl sit- ting on a flat piece of soft grassland surrounded by wild flowers. She glowed with a golden beauty. Her limbs were exquisitely formed and her full breasts were covered by a black deerskin. Ravana could see the contours of her tapering thighs through the thin cloth covering her crossed legs. Dark locks of thickly matted hair hung down to her waist, framing her white-complexioned face. Her red lips moved slightly as she intoned the sacred syllable Om. Her smooth golden arms were bared in front of her as she sat with folded palms, her long curling lashes covering half closed eyes.

Ravana's mind was overpowered by lust. Who was this youthful lady? What was she doing here in such a lonely place? Did she have a protector? Never mind. He would soon deal with that. The forest was no place for such a maiden. She would make an excellent addition to his other consorts. By his mystic power Ravana assumed a human form and approached the girl. He spoke loudly, disturbing her reverie. "O most beautiful maiden, who are you? Why are you practicing asceticism in this lonely region? Towhom do you belong? What fortunate man has you for his wife?" 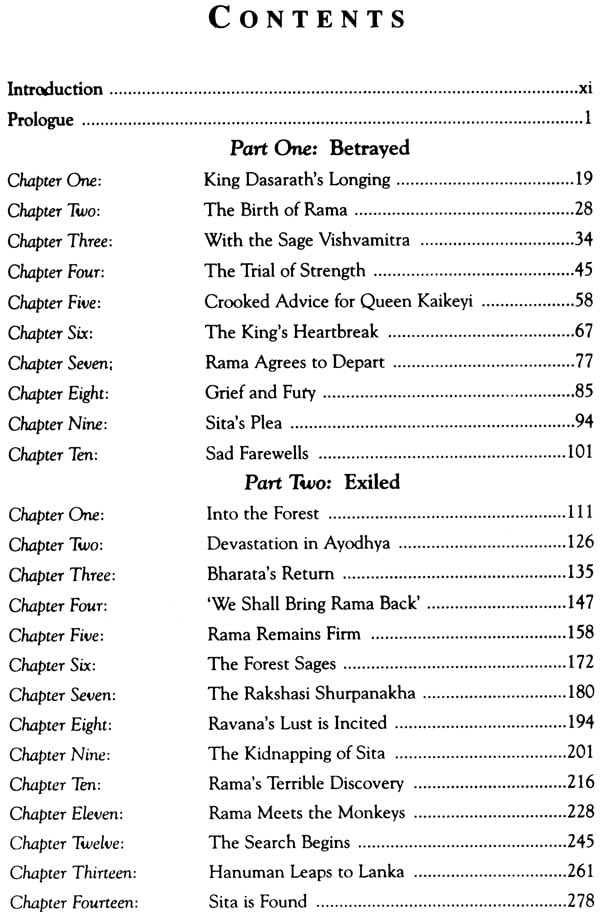 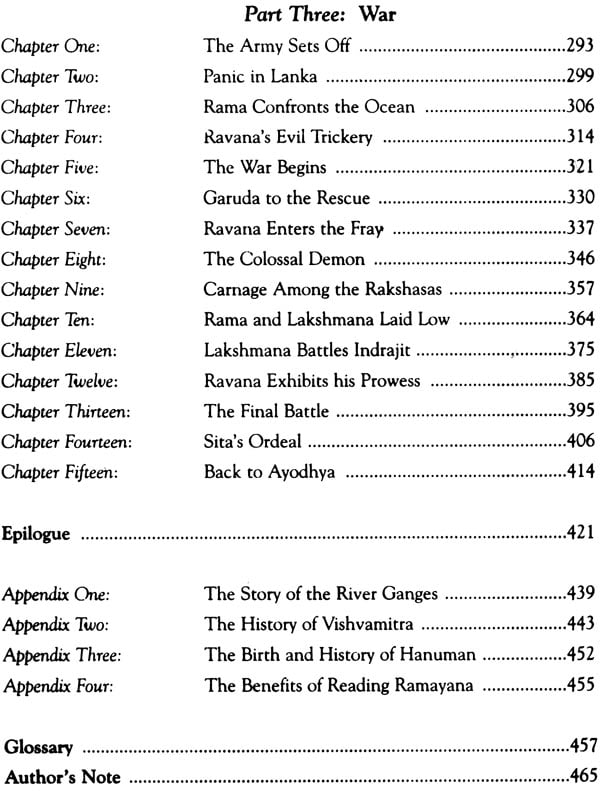 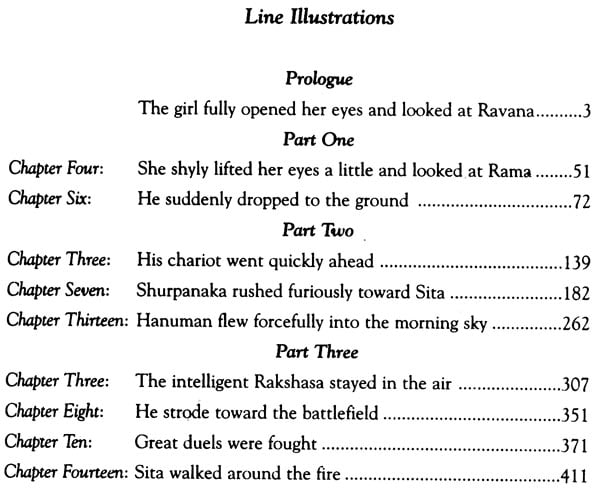 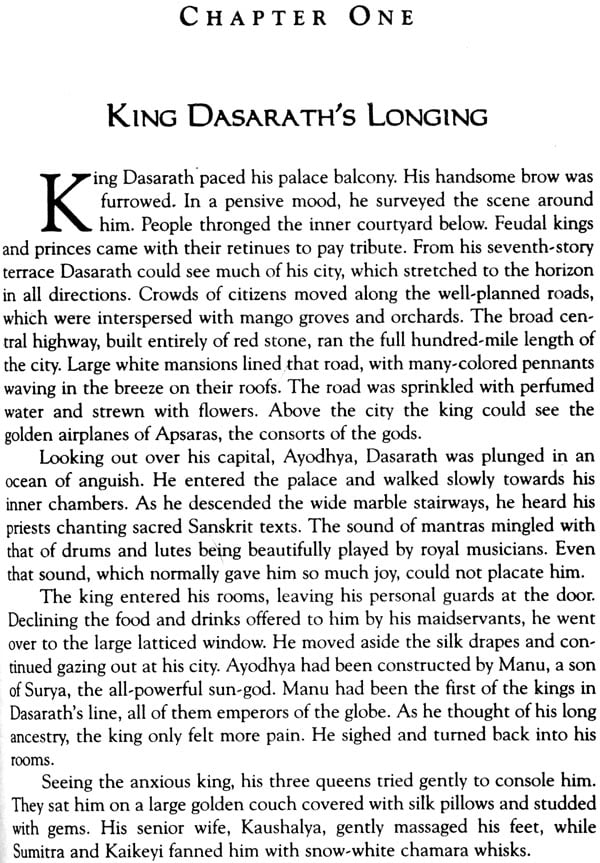 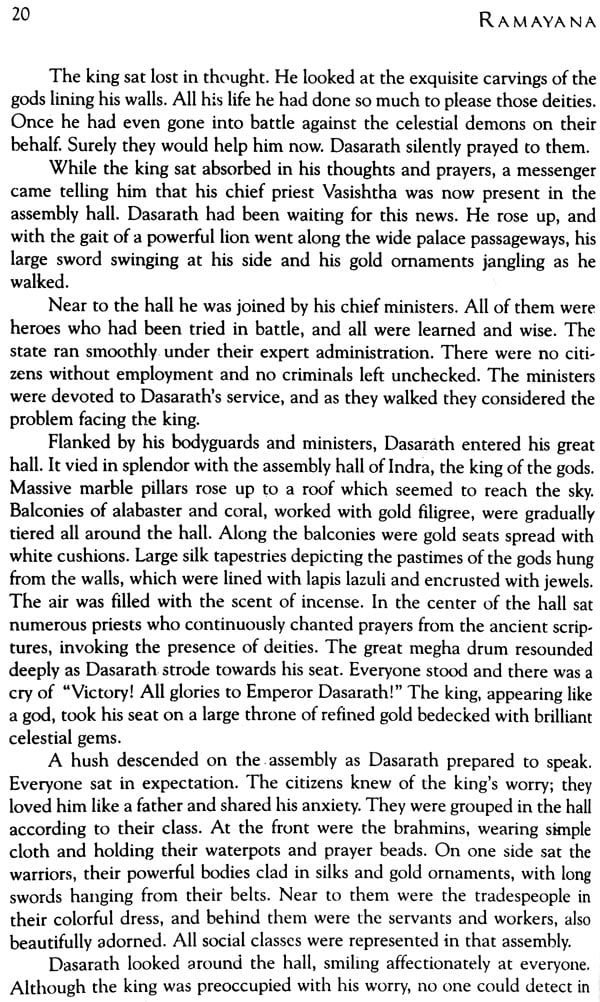 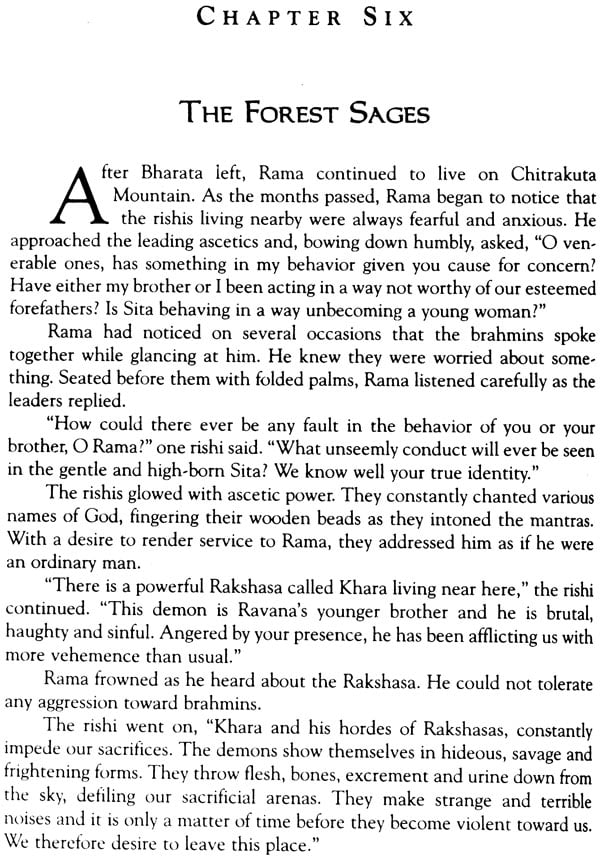 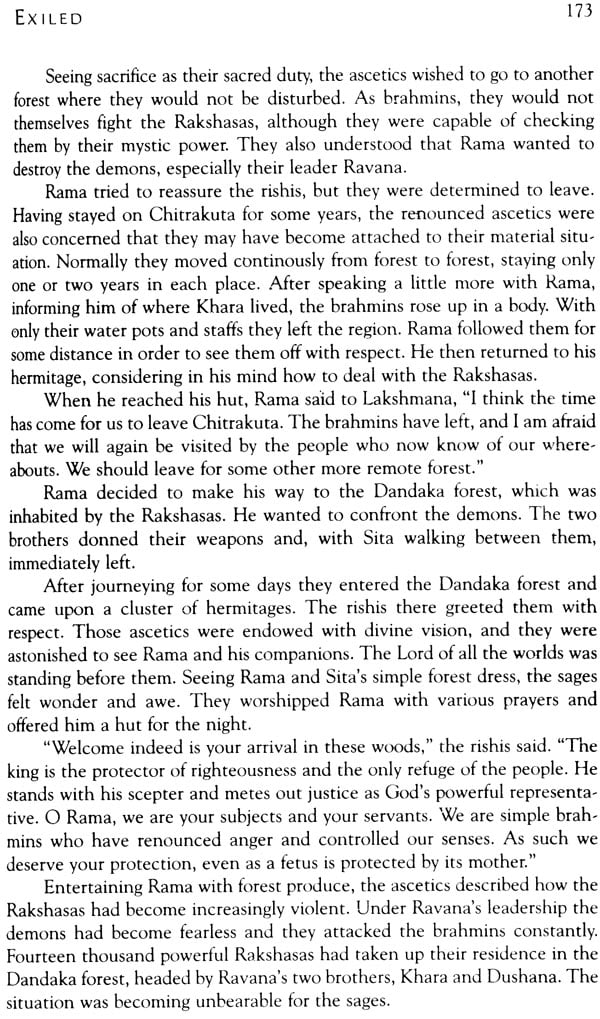 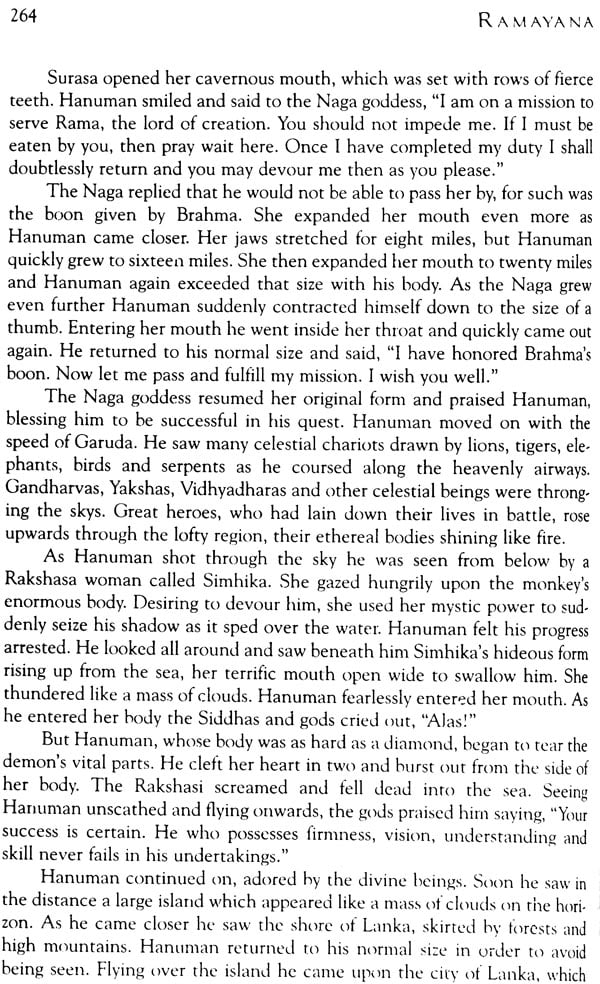 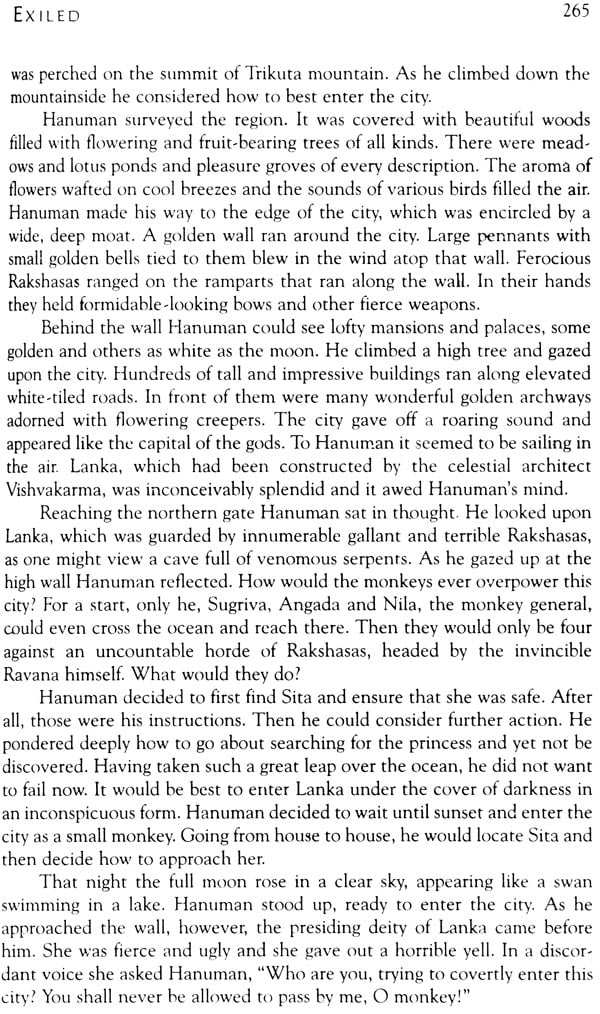 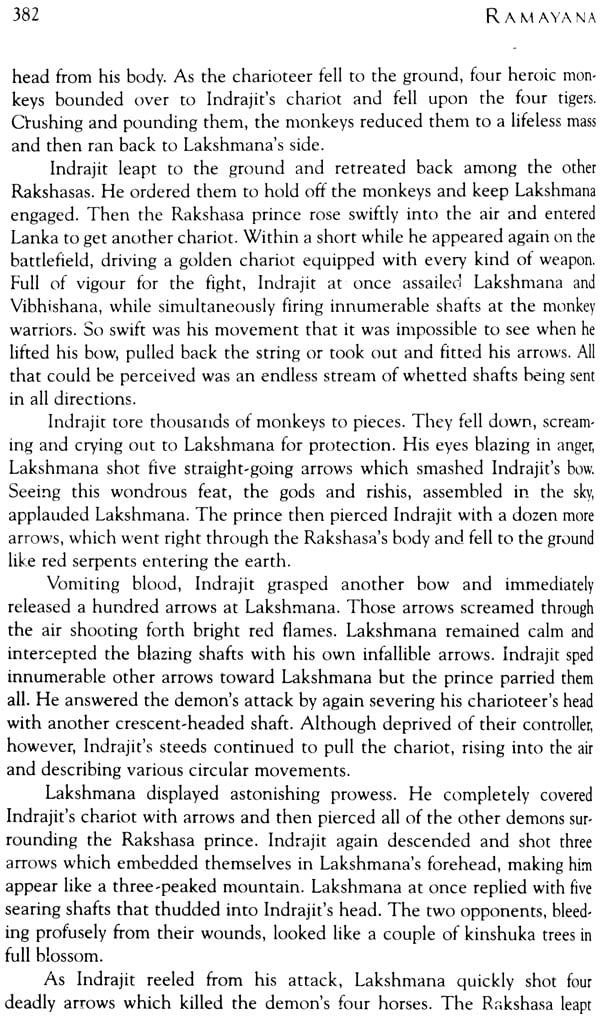 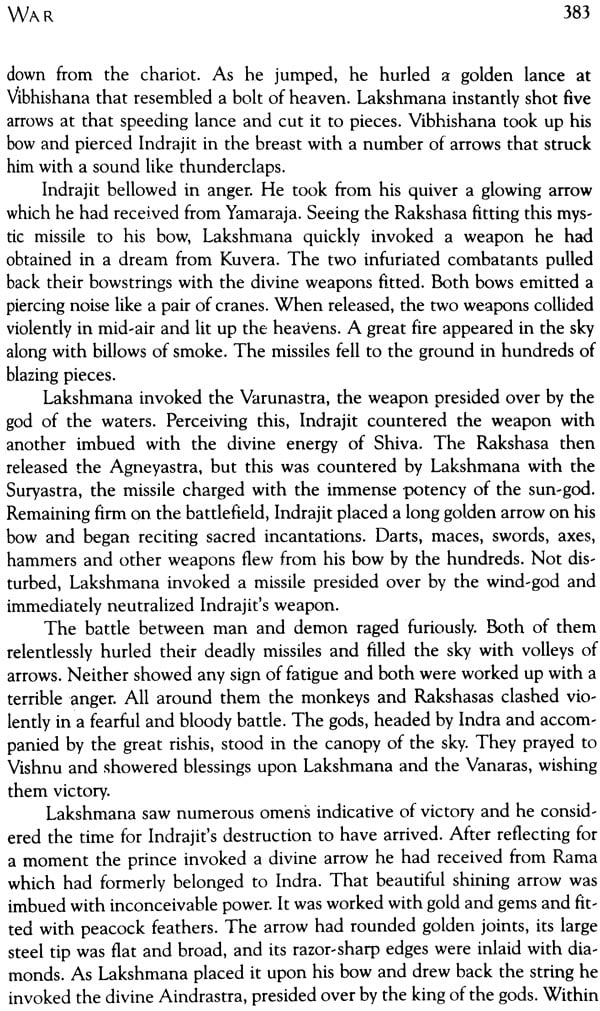