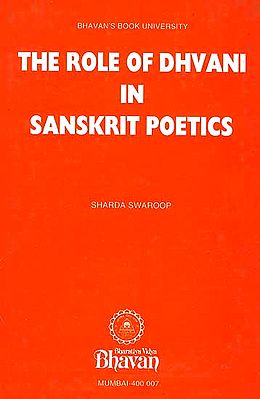 $16.50
Notify me when this item is available
Save to Wishlist Send as E-card Share by Email
About the Author

Dr. (Smt.) Sharda Swaroop Born 11th August 1925, at Lucknow. Belongs to a well known family of Jindals of Lucknow. Grandfather Pt. Ajit Prasad was an eminent lawyer and served as a High Court Judge in Many Princely Stares in pre-partition India. He was a devout Jain and publisher a monthly journal in English, 'Jaina Gazette'. He also translated several Jaina treatises into English from Sanskrit and Prakrit. Father was Shri Sumati Prasad Jindal who was in the U. P. Civil Service. Married into the well known family of Zamindars of Thakurdwara (Moradabad). Husband Sahu Onkar Swaroop was a much sought-after social worker and educationist who had widely travelled abroad.

It gives me great pleasure to write this brief Foreword to the work "The Role of Dhvani in Sanskrit Poetics" by my pupil, Shrimati Dr. Sharda Swaroop, who is now reader and Head of the Department of Sanskrit in the Gokul Das Hindu Girls' College, Moradabad. Shrimati Sharda Comes from a highly cultured family of Shri Ajit Prasad of Lucknow who translated into English several works on Jaina Philosophy. Her father also was an officer in the Executive Department of Uttar Pradesh and retired as Additional District Magistrate. Shrimati Sharda had a very brilliant career both in her School and College. After her matriculation she was married to Shri Onkar Swaroop of Moradabad and continued her College education. She passed her B. A. in the year 1946 with a very high second class. She then joined the Banaras Hindu University for her M. A. in Sanskrit under me and passed out in First Division holding second position in the University and got her name registered for Ph. D. in 1950-51. in the meanwhile, she was appointed a lecturer in Sanskrit in the Gokul Das Hindu Girls' College, Moradabad. Due to her family and professional responsibilities, she took nearly seven years to complete her Research work on the subject and submitted it to the Banaras Hindu University.

As I said above, the subject of her Research was the Role of Dhvani or Suggestion in Sanskrit Poetics. She had to study not Only Dhvanyaloka and Abhinav Gupta's commentary thereon, but also works of writers who criticized the very doctrine of Dhvani such as Mahim Bhatta and other. She studied all these works under local Pundits. I, too, visited Moradabad to see how she was progressing in her work. Finally, she presented the thesis to the Banaras Hindu University in 1958. the Thesis was examined by two eminent scholars. Prof H. D. Velankar of Bombay University and Dr. V. V. Mirashi of Nagpur University and they recommended it to the University for acceptance. In my opinion, her work should have been published almost immediately, but there were delays on account of severel obstructions but I am glad it is now seeing the light of the day/

Shrimati Sharda is now promoted as Reader and Head of the Post Graduate Department of Sanskrit in her above College, and I hope she may soon be made a Professor.

It may not be out of place to mention here that all her daughters are well educated and the youngest two passed their M. A. in Sanskrit in the first Class.

I wish Shrimati Dr. Sharda Swaroop a very happy life as a teacher as she is devoted to her profession.